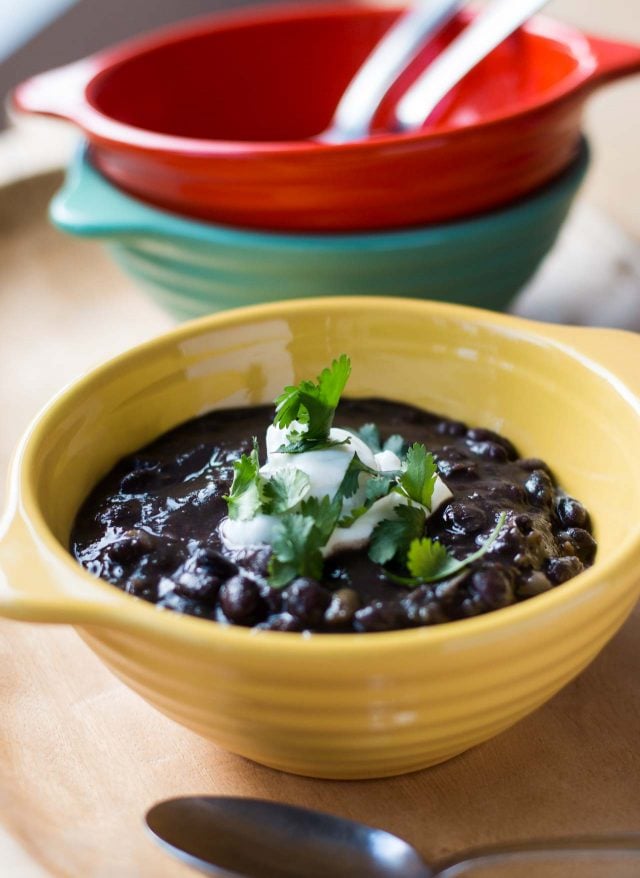 When I was leafing through ¡Cuba! – Recipes and stories from the Cuban Kitchen, I was reminded how much I like black bean soup. In theory, black bean soup is just a dark bowl of beans and doesn’t sound all that exciting. Which is probably why I hadn’t made it in a while. Also black beans aren’t that easy to come by in France. There are lots of wonderful beans in France – haricots Tarbais, flageolets, and haricots de Soissons, but the cultures (and cuisines) that use black beans don’t necessarily skew with French cuisine, hence their paucity. 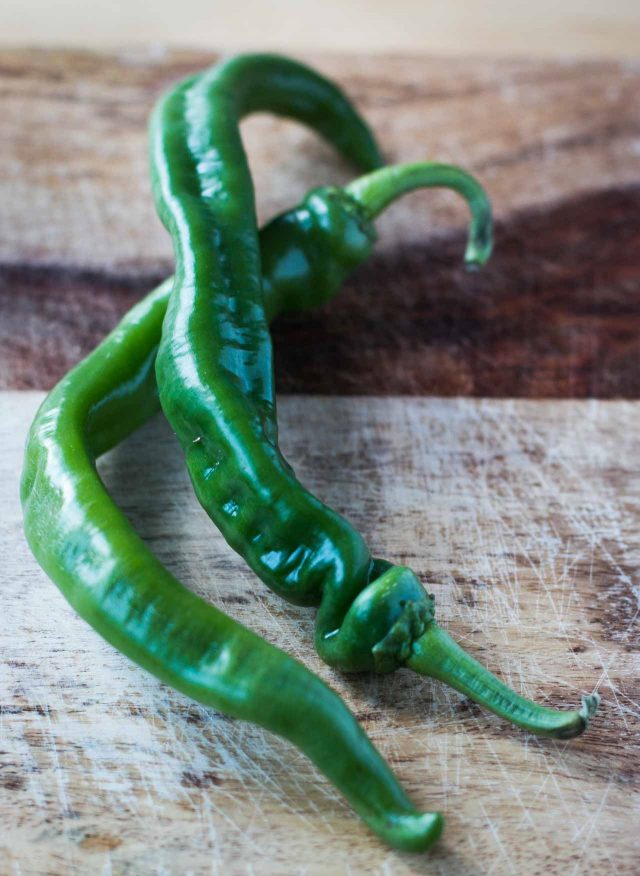 Black beans have a particularly rich flavor, much more so than others beans, and lend themselves to being paired with ingredients that have a lot of pizzazz, like peppers, tomatoes, cilantro, and tangy sour cream. You have to dig a little deeply to find them, so I was grateful when I was on book tour and someone handed me a bag of Rancho Gordo black beans. (Thanks to the woman who gifted them to me!) When I got home, I couldn’t wait to use them. I’d been looking for a reason to revisit this soup, that’s a favorite of mine, and here it was – or is.

The first time I had black bean soup was when I was working in a vegetarian restaurant. It was really, really good – excellent, in fact, and had chopped green olives in it. The story goes that a Cuban woman was dining in the restaurant, tasted the black bean soup, paused, then told the cooks that the soup would be better with olives. So they became part of the recipe. 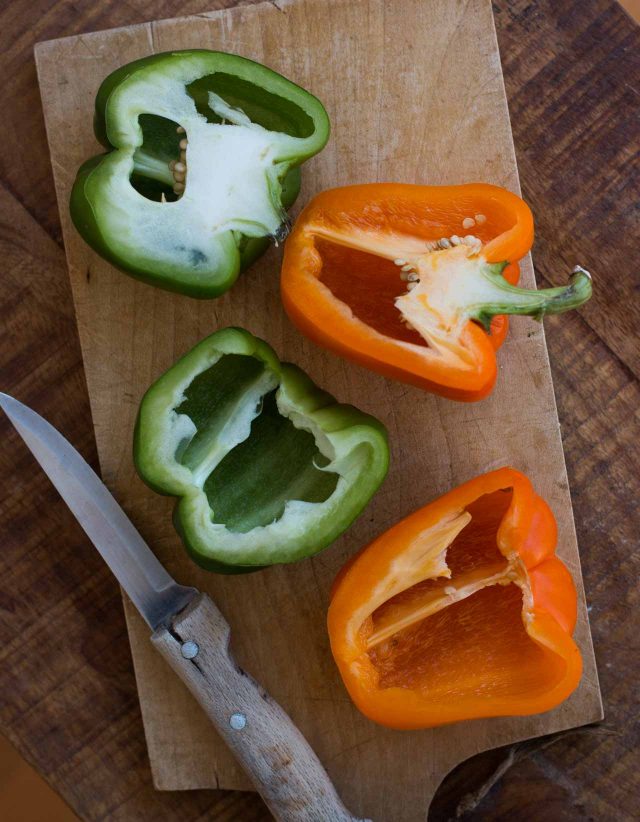 It wouldn’t occur to me to put olives in black bean soup, but works like a dream. The bits of olive gives a salty spark to the inky beans, and I love the combination. 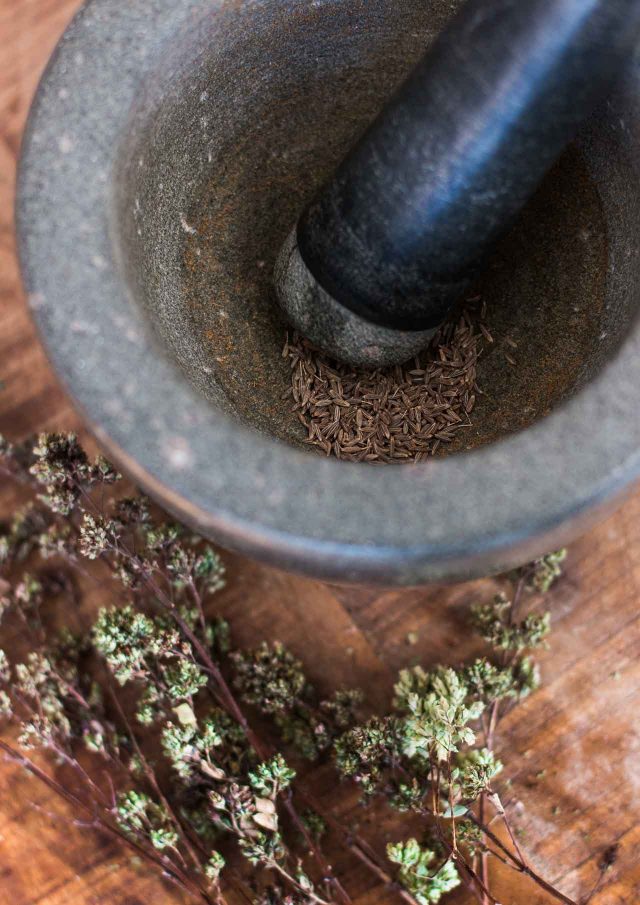 One thing I don’t love, though, is green peppers. But the flavor is important for the soup, so I took one (but not two) for the team, and used one green and one orange bell pepper, to split the difference. 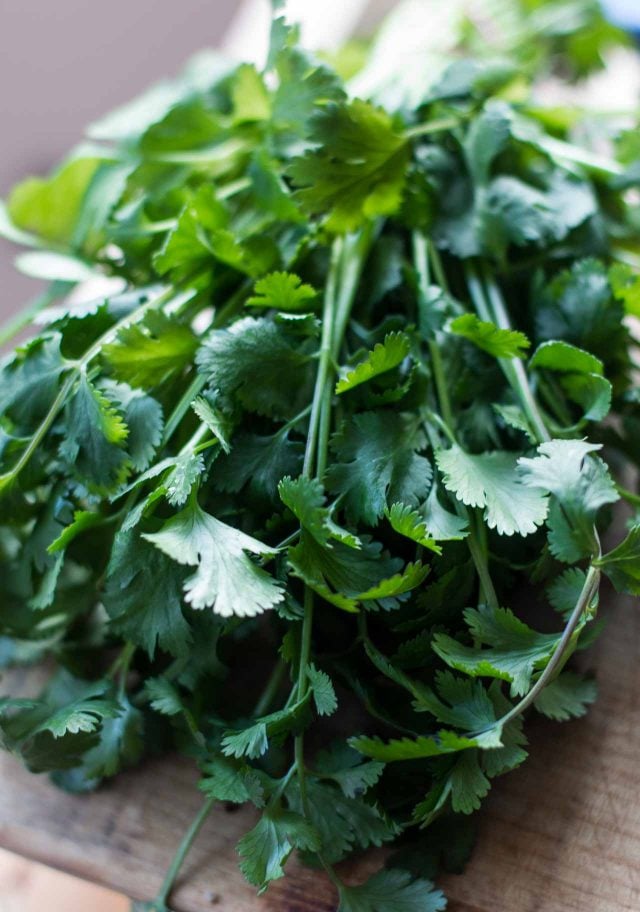 DIYers will be happy to hear that I ground cumin seeds that I picked from a friend’s garden in the south of France, and that I plucked oregano from dried branches another pal had sent me. Gosh, with friends that give me beans, spices and herbs, I just need to find someone that grows and cures their own olives, and I’ll be all set. 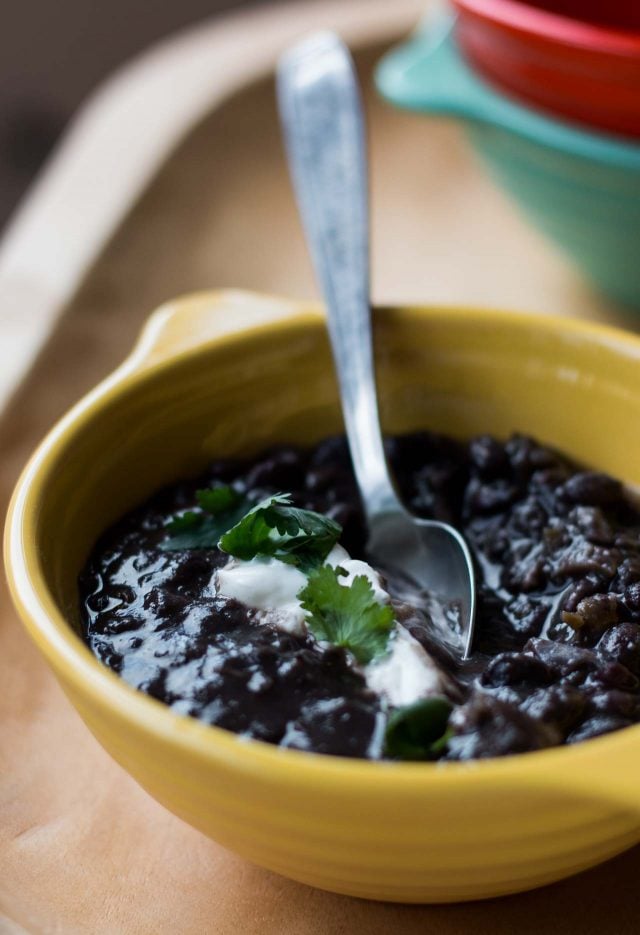 Some people don’t think that chile peppers skew French cuisine, and that’s not necessarily true. There are the wonderful Espelette peppers in the Basque region, which I’ve seen fresh in the southwest of France, but they’re usually available dried or powdered. If anyone sees them fresh in Paris, let me know and I’ll be right over! 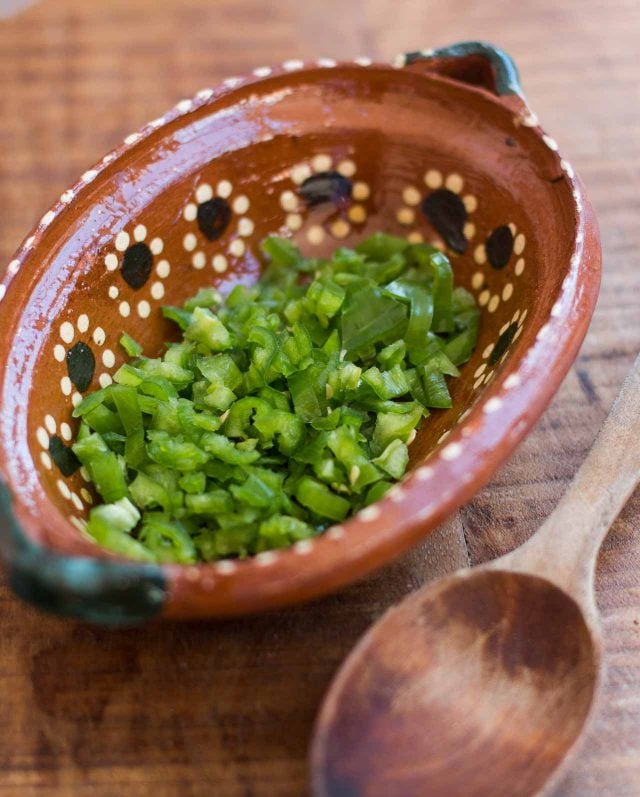 Wandering around multicultural neighborhoods, which I frequently do, in areas like Belleville and La Chapelle, I come across fresh chiles that are squat and wrinkled, and fiery hot (the vendors always try to dissuade me from buying those), or elongated, twisted varieties that are usually labeled either doux or fort – soft or strong.

Their idea of ‘strong’ is often different than mine, but a middle-range chile is good for this soup. You want a bit of heat, but you don’t want to overwhelm the flavor of the beans. Of course, you can take it in any direction that you want. Either way, a dollop of cream is always welcome, and encouraged. 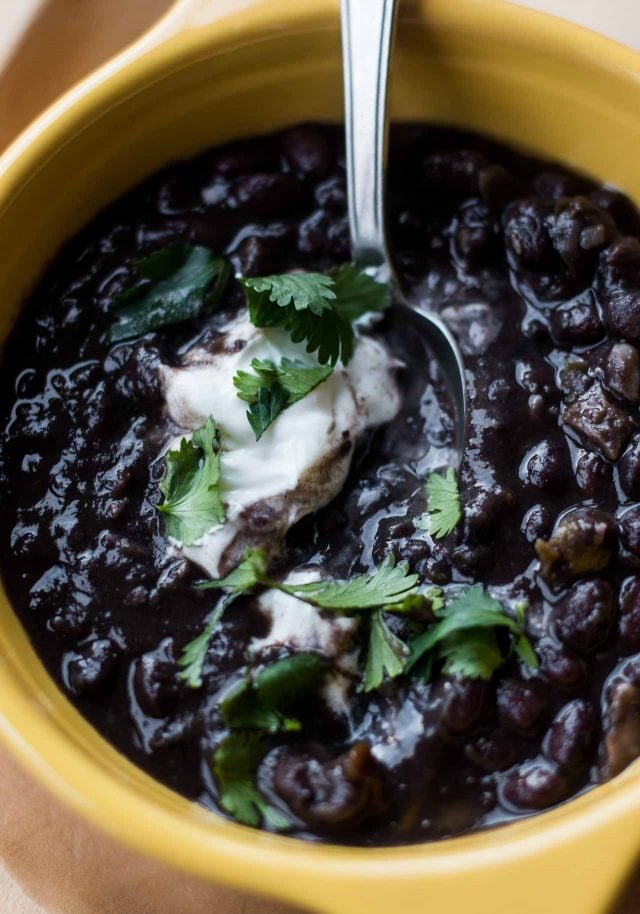 Adapted from ¡Cuba! and Cabbagetown Café Cookbook You can either pit your own green olives, or if you want to use Spanish-style or Manzanilla green olives, as they are sometimes called (the kind sold in jars, stuffed with pimentos), no need to remove the pimentos - just chop them up with the olives, and add them. Jalapeno peppers are a good choice for the chiles, but feel free to use any that suit your tastes. I would avoid peppers that are too strong or hot, as they'll overwhelm the soup.
2 cups (450g, 1 pound) dried black beans
2 bay leaves
9 cups (2,15l) water
2 bell peppers, stemmed and seeded, one split in half, one diced
2 medium onions, peeled, one split in half, one diced
1 teaspoon, plus 1 teaspoon salt
2 tablespoons olive oil
freshly ground black pepper
1-2 chiles, such as jalapenos, stemmed, seeded (or you can add the seeds), and diced
4 cloves garlic, minced
1 1/2 teaspoons ground cumin
1 teaspoon dried oregano
1 tablespoon red wine vinegar
2/3 cup (95g) chopped pitted green olives
1. In a large pot, such as a Dutch oven, soak the beans overnight with the water and bay leaves. (It's an optional step, but can help them cook faster.)
2. The next day, add the halved pepper and halved onion to the bean pot. Bring the beans to a boil, lower the temperature to a simmer, and cook the beans partially covered, skimming off and discarding any scum, until the beans are tender, about 1 hour, adding 1 teaspoon of salt midway during cooking.
3. While the beans are cooking, heat the olive oil in a skillet. Add the diced pepper and onion, and cook until wilted, seasoning with 1 teaspoon of salt and a few turns of freshly ground black pepper, about 5 minutes. (You may need to add a bit more olive oil if the mixture is too dry or is burning.) Add the garlic and chile peppers, and cook for 1 to 2 minutes more, then add the cumin and oregano, and cook for another minute, until aromatic. Turn off heat and add a small splash of water, scraping the bottom of the pan to release any stuck on bits. Set aside.
4. When the beans are cooked, remove the halved onion and pepper from the bean pot, as well as the bay leaves. (Discard the bay leaves.) Puree the onion and pepper halves in a blender or food processor (or with a potato masher) along with about 2 cups (320g) of the beans and enough of their liquid so they'll puree, if using a machine.
5. Return the pureed vegetables and beans back to the pot and add the red wine vinegar, chopped olives and cooked vegetables. Bring the mixture to a boil, reduce the heat to a simmer, and cook about 15 to 20 minutes more, seasoning with additional salt, if desired.

Serving: Serve with a dollop of crema or sour cream. A nice touch is to add fresh lime juice to the cream, to taste. Garnishes could include chopped cilantro, crumbled cotija cheese (in place of the sour cream), diced avocado, and/or pickled onions.

Storage: The soup is good the same days it's made, but some prefer it the second day, which it thickens up. The soup can be refrigerated for 3-4 days. It'll thicken up quite a bit, but can be thinned out with water or stock. 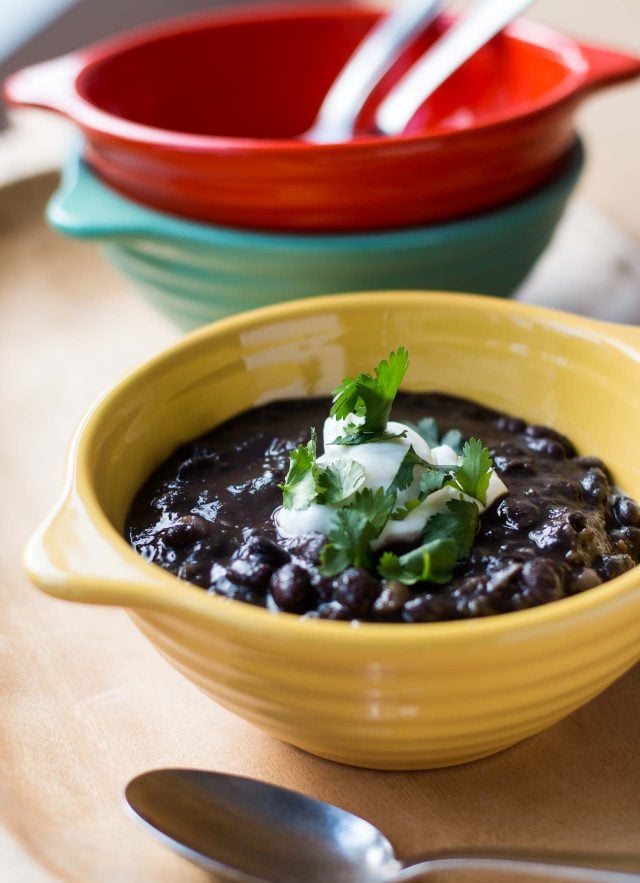