Menu
« How To Use Gelatin
Pain d’epices Recipe » 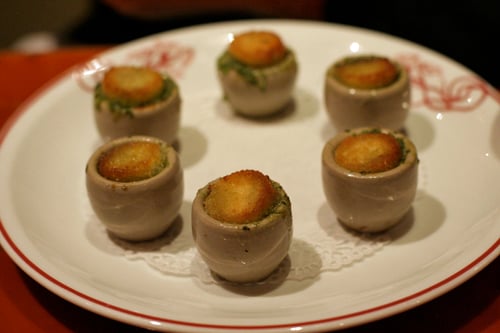 Proving that just because you have good ingredients, doesn’t necessarily mean you can make them good. True, it’s harder to go wrong with stellar vegetables, seafood, and meat, but a recent dinner at L’Assiette proved that a little finesse, and seasoning, can transform decent ingredients into something pretty good. Unfortunately, that wasn’t the case on a recent visit.

For many years, L’Assiette was the “go to” restaurant in Paris. When I worked at Chez Panisse, every cook who came here simply had to eat the cuisine of Lulu Rousseau, the beret-wearing woman who cooked simple food, and did it very well. The food came with a slightly hefty price tag which was mitigated by the good food on the plate. She sold the restaurant and I recently went back for a visit. The prices remain high, but what’s on the plate doesn’t exactly justify them 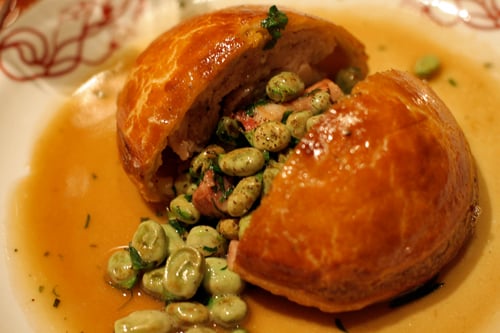 We were startled at the prices on the daily special chalkboard: €23 for a plate of asparagus and €35 for a main course of veal with morel mushrooms. (Although a friend recently ate at Benoît, where a plate of 6 green asparagus spears was €34 [$46]. So maybe this was a bargain…) We ordered a carafe of wine and began by choosing three of the four first courses, to split amongst five of us.

After spearing up the shards of decent smoked ham they bring to each table, we all nibbled on the first courses. The little porcelain dishes of escargots were an interesting presentation, but didn’t improve upon the buttery bistro original.

The €18 cassoulet of just barely-cooked vegetables was way underseasoned, proving that if you’re going to use ingredients sparsely, you’d better make damn sure they’re perfect. A similar presentation at Mon Vieil Ami, comes at a lower price, and is far better. 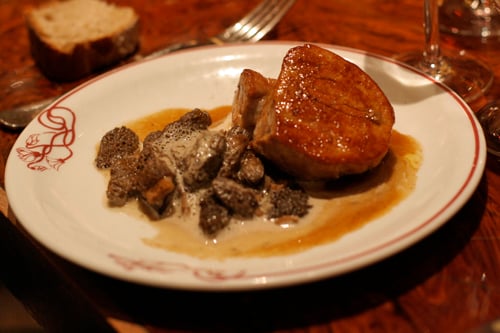 Main courses were uneventful. I had rabbit wrapped in pastry and unpeeled favas, which was passable, but Romain pronounced that his pricey veal with morel mushrooms had “aucun goût”—no flavor. Like everything, there was a lack of salt. And while some argue that salt can be added by the diner, food just doesn’t taste the same unless the salt is cooked in it. And if they’re not going to salt the food well, at least put flaky sea salt on the tables instead of acrid, ordinary table salt. Especially at these prices.

When you have just two desserts on the menu, one being a hot Chocolate Soufflé, and one cheese, a three-inch St. Marcellin for 12 euros, they should be amazing. I don’t mean to be a smarty-pants, but the Chocolate Soufflé tasted like runny (and grainy) chocolate pudding mix with hardly any chocolate flavor.

My tablemates sharing the cheese said it was inedible, leaving an odd, burning sensation in their throats. The host took it away, not offering another one to replace it. But at least didn’t appear on the check. (I wasn’t anxious to try it. And since they were both well-respected food writers, I took their word for it.) 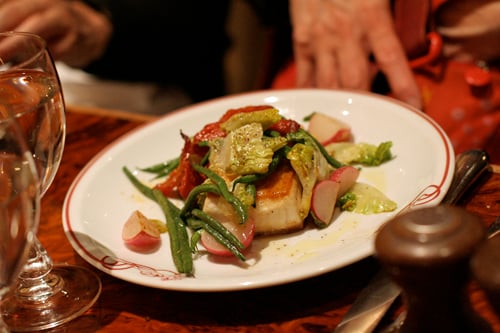 I believe everyone who works in restaurants tries to do their best. But when a restaurant is only one-third full, and the ingredients are obviously of very high quality (and you’re charging accordingly), and you have such a good pedigree, I think a bit more care could be taken with the food you’re serving to make it shine. L’Assiette could use a little more polish.

[UPDATE: Since writing this, a new chef has been in place and one of my dining companions returned. Here’s his current write-up.]