Menu
« Things to do in Paris at Christmas
Homemade Orange Bitters » 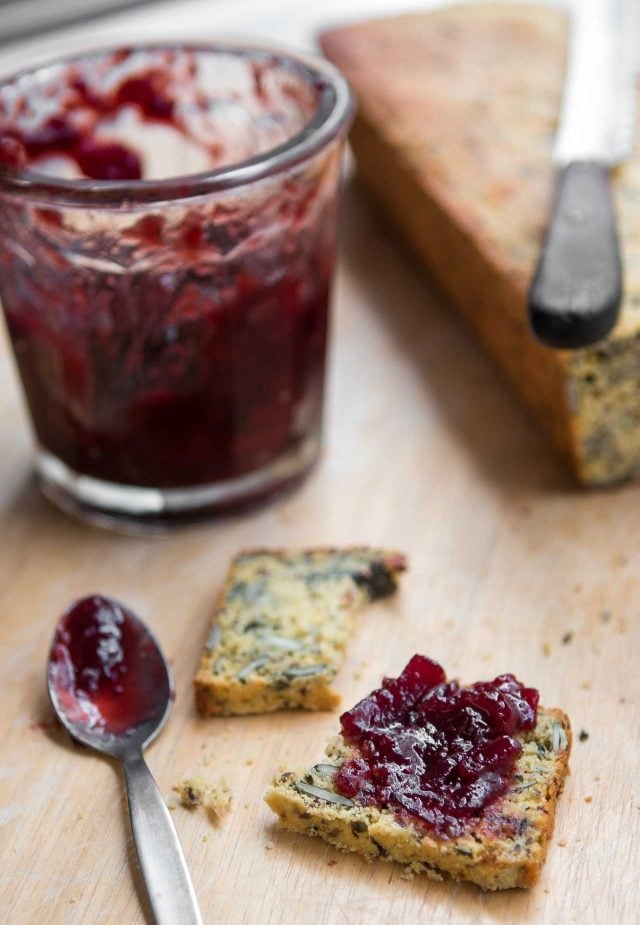 At some point, we’re all going to have to decide on the same measuring system. Maybe we can make it our New Year’s resolution? Most of the world is using the metric system while a few holdouts, namely the United States, Liberia, and Burma, are sticking with other systems of measurement. For the record, I know some very good bakers that use cups and tablespoons, and I like them as well.

Anyone who says they aren’t accurate hasn’t encountered a French recipe that calls for un verre de vin de lait (a “wine glass” of milk), a cullière à soupe (a soup spoon) of baking powder, or trois feuilles de gélatine, when every sheet of gelatin I’ve come across is either a different size, weight, or strength. And my wine glasses come in a lot of different sizes, too, although I always seem to reach for the largest ones…but not necessarily for baking. 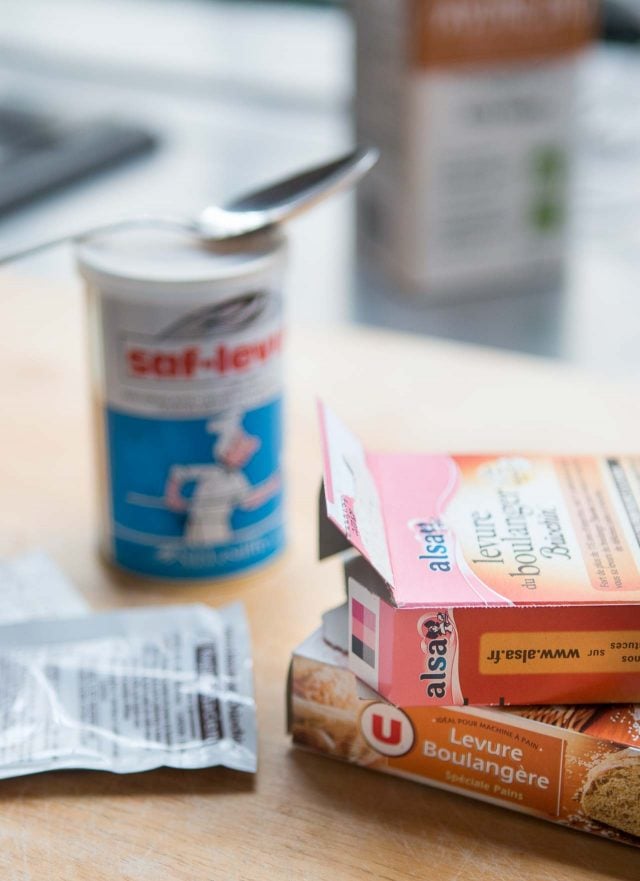 Although books have been written on the subject, my take is that most Americans like holding measuring spoons and cups. It’s more tactile and visceral, kind of like how many of us holdouts don’t want to make dinner in a machine that will make it for us.

Many of us have fond memories of measuring cups, having seen our parents and grandparents using them, and having them handed down to us, but for recipe writers, metrics really are the way to go. The accuracy issue aside, it’s easy to cut a recipe down, say, 20%, which comes in handy when you’re testing a recipe but find that if you could somehow resize the batter down by 20-percent, it’d fit perfectly in a standard cake pan. Otherwise, you’re stuck telling people to use 3/4 cup plus 1 tablespoon of milk, or the 3 tablespoons plus 1/4 teaspoon of heavy cream I saw in a European cookbook that had been translated into English. I don’t know about you, but I’m not measuring out 1/4 teaspoon of cream to make a batch of ice cream. 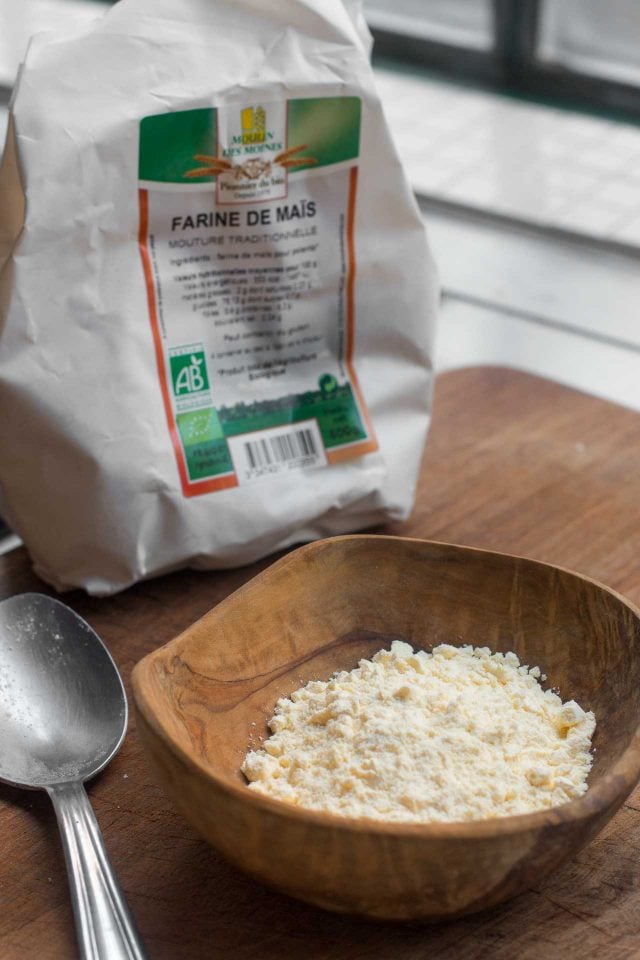 I decided to write recipes in both systems of measurement around eighteen years ago when publishers were against it, saying the extra type on the page made recipes look more confusing. For me, on the blog (and in cookbooks), it’s a lot of extra checking, weighing and writing, and checking, weighing and editing again, to make sure you get all the conversions right. And even then, one gets challenged. Le sigh. 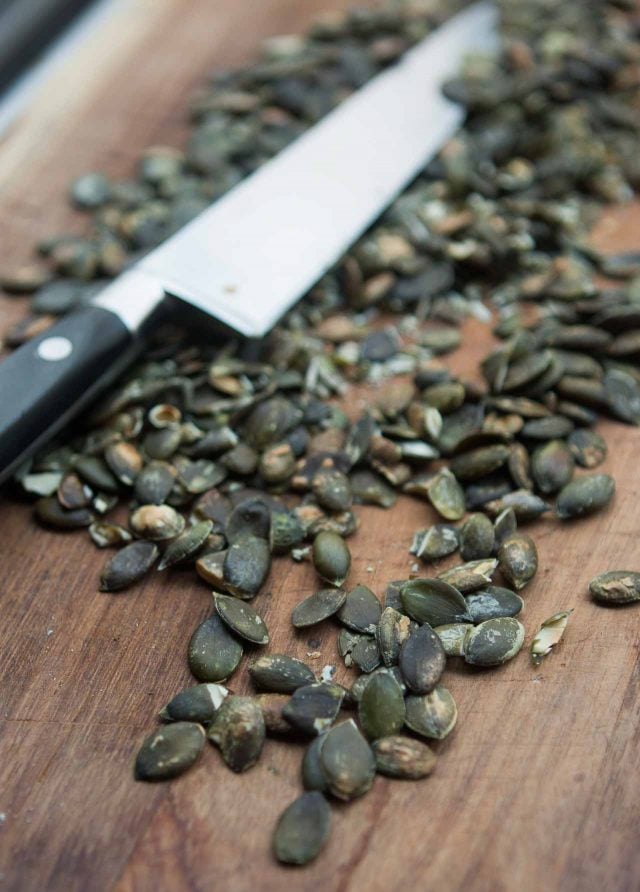 One thing I think everyone can agree on, though, is that Poilâne bakery is the most revered bread bakery in the world. Sure, a lot of other bakeries have opened up near and far, but every professional baker I know gives credit to founder Lionel Poîlane for enriching the world with the idea that simplicity, flavor, and nourishment of good bread made with wholesome ingredients, is an important foundation in our world. And one he promoted not just with words, but with every loaf that came out of his wood-fired ovens.

Many people, myself included, experienced going into the bakery and having him lead you down the stairs to where the oven is, whether he knew you or not. If you expressed interested in bread, he’d take your down there, grab a blob of bubbling, velvety levain dough from the mixer bowl, and shape it into a round boule, which was very convincing proof of how it easy it was to make a good loaf of bread. 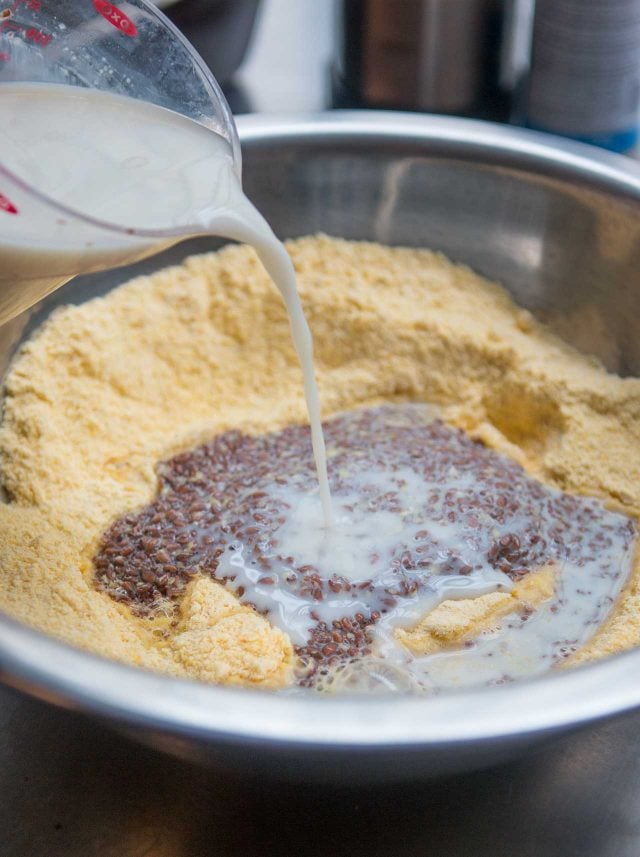 Of course, it’s not as simple as that. One of the things that he had going for him was decades of experience making bread. In Poilâne: The Secrets of the World-Famous Bread Bakery, his daughter Apollonia Poilâne, tells of the story of losing her father, but picking up the reins of the bakery and bringing Poîlane bakery into the next century.

It’s tricky changing things in France, especially something classic and beloved. But generations and tastes change; one I noticed soon after she took over was that they stopped using the oversized bags for bread (for ecological reasons), and now use more compact ones. They’ve also refashioned their famous Punition cookies (page 193), buttery shortbreads called sablés, into spoon-shapes, which are used for stirring coffee in their café. They were such a hit, they started selling them in the bakery.

These stories, and recipes, are in the book, including this Corn-Flour Bread, which I tasted at the bakery right before they were planning to launch it. It’s made with corn flour, not cornmeal, and is both gluten-free and dairy-free. Corn and cornmeal aren’t used in many French dishes, but being half-American (on her late mother’s side) Apollonia embraced corn. Like everything at Poilâne, from the deceptively simple sablés and apple tarts, to the rye-raisin bread (I defy anyone to find a better raisin bread anywhere), this corn flour loaf is delicious. 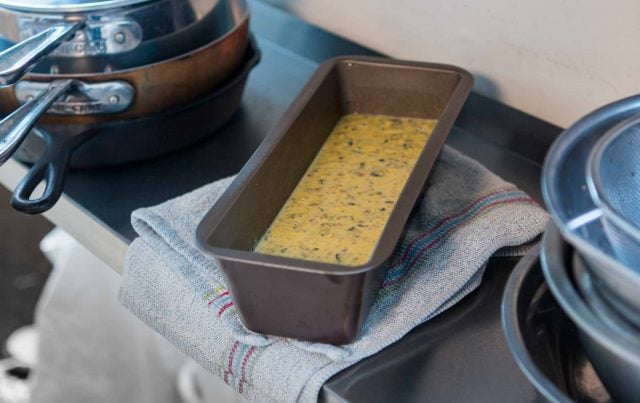 I replaced the original hazelnuts in the recipe with pumpkin seeds, for the nut-free people. If you can’t eat seeds, well…okay, you finally got me. But you can leave nuts and seeds out altogether, or keep them in for crunch. I also found that putting the flax seeds in a mortar and pestle, as directed, caused the slippery little devils to jump around, and evade pounding. 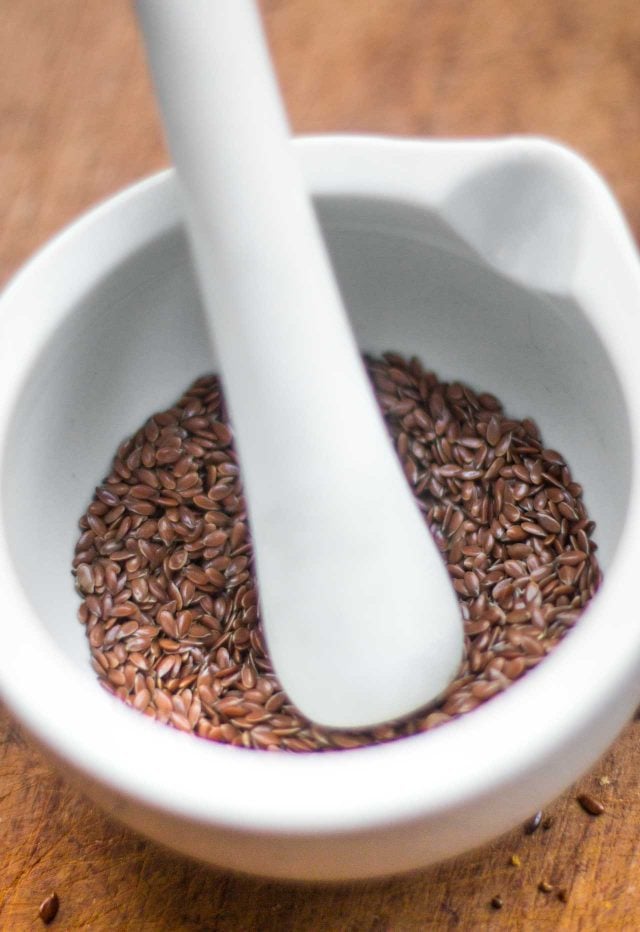 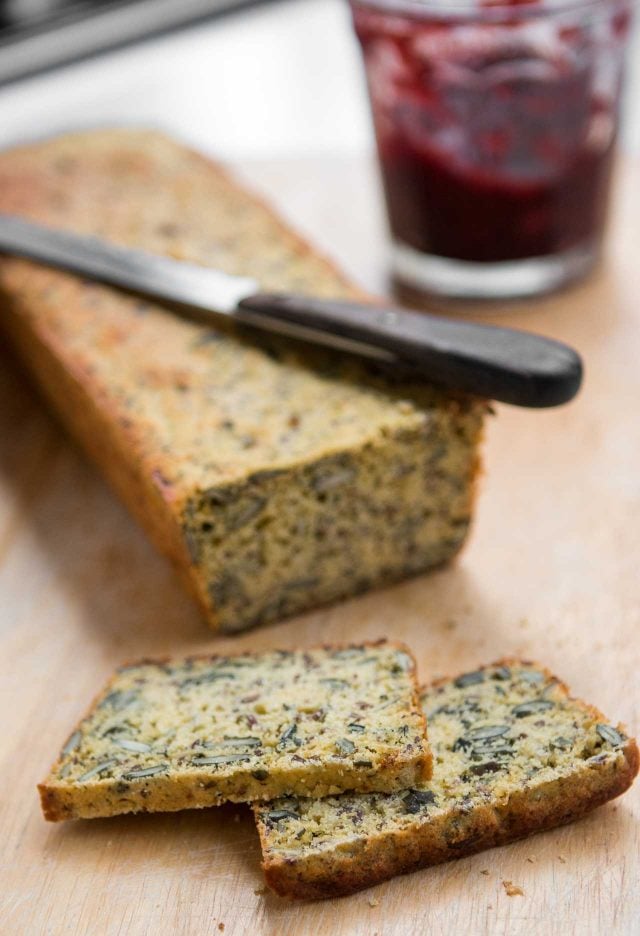 A few blitzes in a mini-chopper did the job more effectively. (The book also says you can pound them in a zip-top freezer bag with a rolling pin.) So the only thing left to do was find a warm place in my apartment, in the midst of this chilly winter we’re having, to let the dough rise. Fortunately I found on a shelf above a radiator, and put a folded kitchen towel underneath the loaf so it didn’t get too hot. Voilà, it worked perfectly. 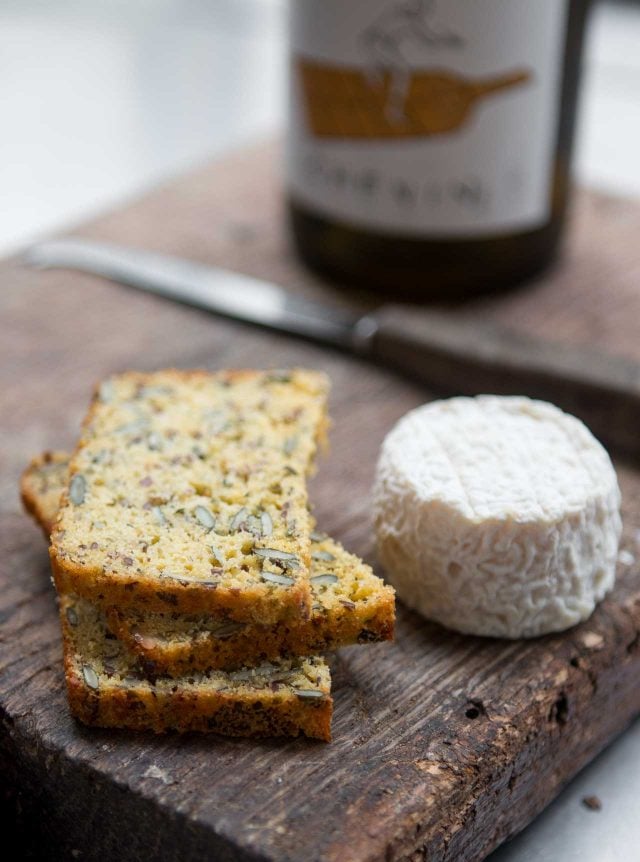 Now that I have this easy recipe in my pocket, I’m going to give it a go in a batch of stuffing. When I went to the outdoor market to get sage, the grower/vendor told me it was winter, so sage was a no-go. But when I’d told her that I was going to use it to make a cornbread farce (stuffing), she was visibly baffled and called to the others working at her stand to let her know she had a live one in front of her. Actually, they were all a little intrigued, but were having trouble picturing it in their minds. Minds are tough to change everywhere, whether it involves a cup or a scale, or using an unknown ingredient in a traditional recipe. But my mind is made up on this bread, which is the picture of perfection; it’s easy to make, and even easier to eat. 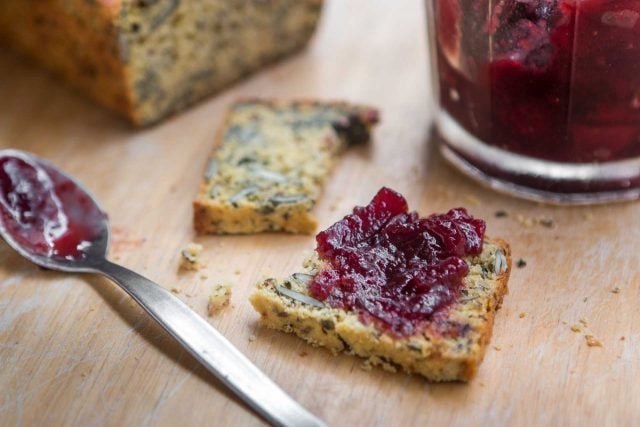 Adapted from Poilâne: The Secrets of the World-Famous Bread Bakery by Apollonia Poilâne I changed the original recipe a bit, adding a touch of honey, which augmented the taste of the cornmeal, but you're welcome to leave it out or replace it with sugar or maple syrup. The original recipe also used 1 cup of toasted hazelnuts, chopped, but I liked the pumpkin seeds in it. You can leave the nuts or seeds out if you wish. I've made the loaf a few times, at first with the oat milk that's used in the book (which keeps it vegan and dairy-free), as well as with whole milk, and it worked well with both. Note that this recipe uses corn flour, not cornmeal. Corn flour is yellow and has the consistency of all-purpose flour, and is finely milled. I find it in natural food stores. You can find it online at Bob's Red Mill and King Arthur Flour. In some countries, what's called cornflour is corn starch, and isn't the same thing, so shouldn't be used. Update: A few readers in the comments had trouble getting the dough to rise. I found that it's important to make sure to use yeast that works. The yeast isn't proofed first in this recipe, but if you want to ensure your yeast is working, warm about 1/4 cup (60ml) of the milk that'll be added in step #3 until it's just warmer than room temperature (~80ºF/27ºC) and sprinkle the yeast over. It should start bubbling in 5 to 10 minutes. If it doesn't, replace the yeast you're using with a new packet.
3 tablespoons (35g) flax seeds
1 2/3 cups (400ml) oat milk or whole cow's milk
2 cups (240g, 8.5oz) corn flour, I recommend measuring this by weight (see headnote for other info about corn flour)
2 3/4 teaspoons (9g) active dry yeast
1 1/2 teaspoons flaky sea salt, or 1 teaspoon fine sea salt
1 tablespoon honey
1/2 cup (60g) lightly toasted pumpkin seeds, very coarsely chopped, optional
1. Lightly crush the flax seeds in a mini-chopper or in a zip-top freezer bag with a rolling pin. Mix the seeds in a small bowl with 2/3 cup (160ml) of the milk. Let stand at room temperature for 1 hour. (This can also be done in advance and refrigerated for 24 hours before you plan to use it.)
2. Lightly oil a 9-inch (23cm) loaf pan.
3. In a large bowl, stir together the corn flour, yeast, and salt. Add the milk/flax seed mixture, the honey, the rest of the milk, and the pumpkin seeds, if using*. Mix thoroughly then scrape into the prepared loaf pan. Let rise in a warm, draft-free place for 1 hour. The loaf will rise slightly, but not dramatically.
4. Ten to fifteen minutes before the bread is ready to bake, preheat the oven to 375ºF (190ºC).
5. Bake the bread until it starts to brown around the edges and the center feels just done when you press it, about 25 to 30 minutes. The baking time will vary depending on the size of the pan. If you use a wider pan than I used, the bread will be done at the shorter end of the baking time. (The book recommended baking the bread at 400ºF/200ºC for one hour, which seemed very long to me.) However rather than depending on exact baking time, begin checking for doneness at the 25-minute mark.
6. Remove the bread from the oven and let cool about 30 minutes. Remove the bread from the pan and let cool on a wire rack completely before slicing.

Storage: The bread will keep for up to three days at room temperature, wrapped in a tea towel. It will get a little crumbly in the subsequent days after it's baked. It can also be frozen for two to three months.

*The seeds will make the bread a little more crumbly to slice, but I like the crunch of them in the bread, so deal with it. Using a sharp bread knife will help you get cleaner slices. 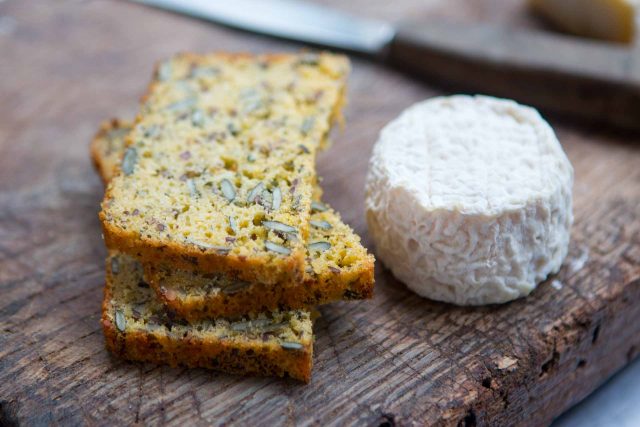 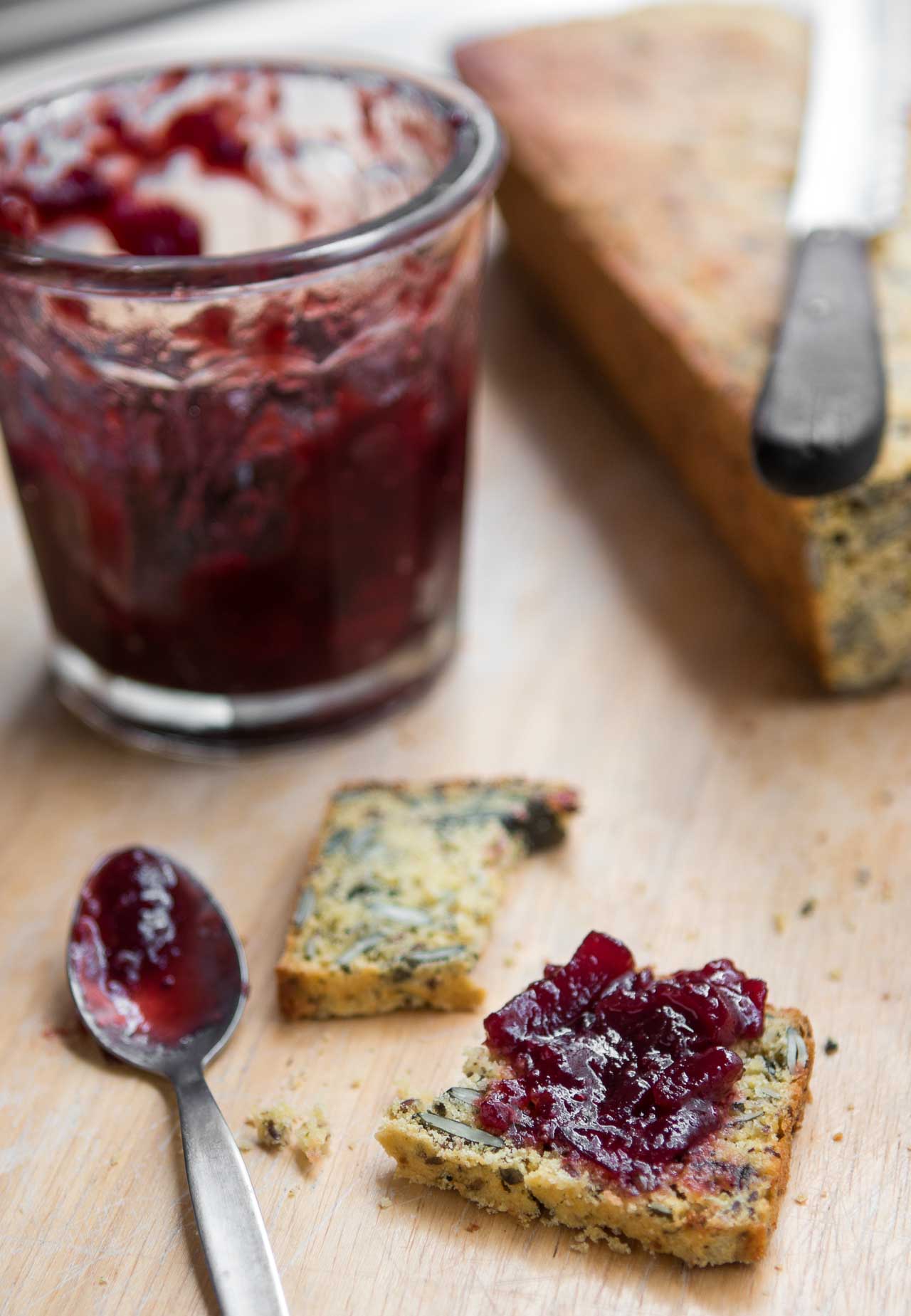