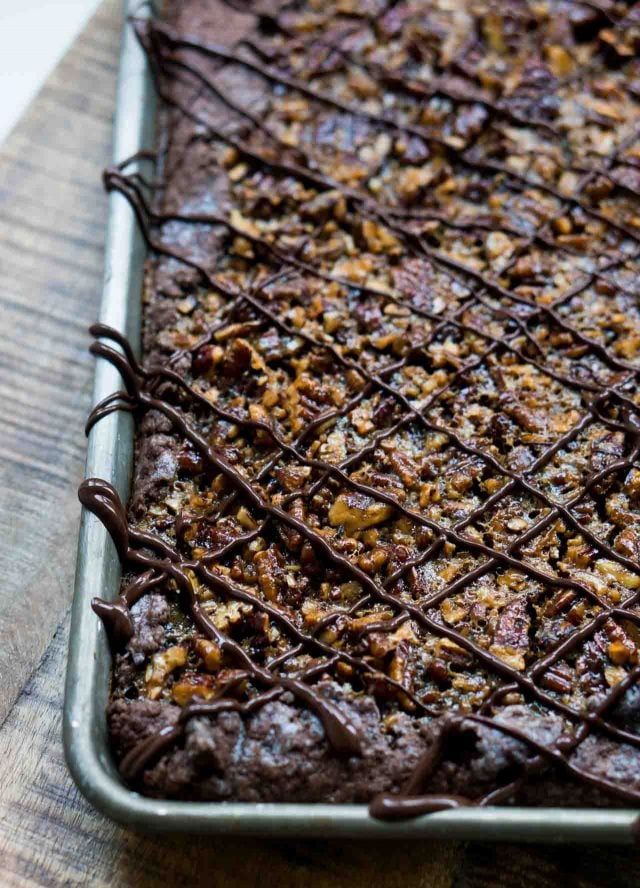 Pecans are the great American nut and at no time of the year are they more in demand than around the holidays. There are a lot of different nuts grown in the United States; walnuts, almonds, pistachios, and hazelnuts, but a pie made with toasted pecans is a holiday tradition and every year I have the urge to make one.

Recently an American membership-only store opened in France, and while there are many French hypermarchés (mega-stores), this one caused a splash, particularly amongst Americans, because they have things like big rolls of their famous plastic wrap with that superlative cutter, IPA beers, and from what I hear, big bags of pecans. 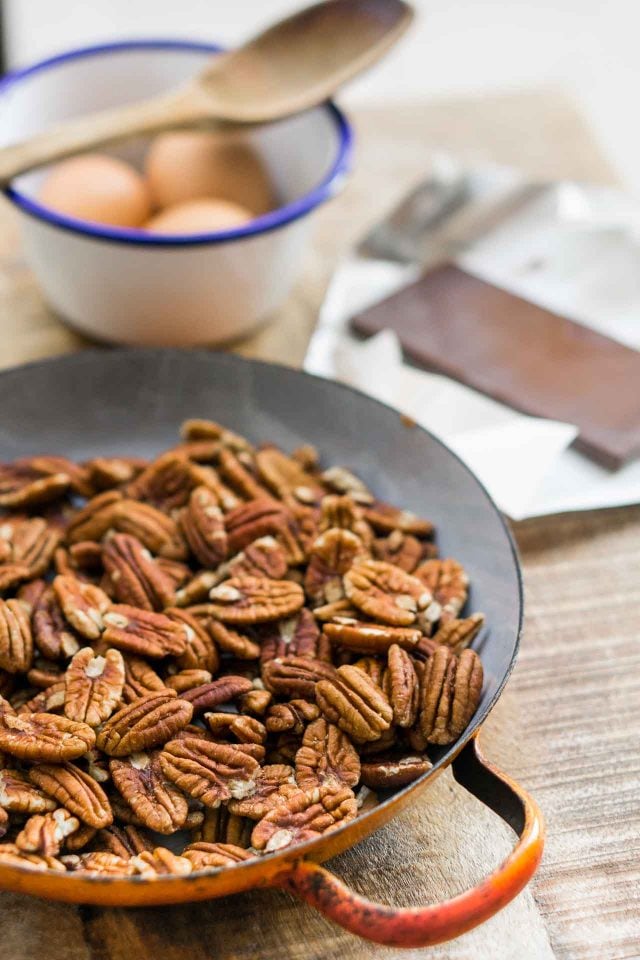 There’s always been Metro, a similar mega-store that carries more restaurant-supply items. But there’s a huge refrigerator filled with every kind of French cheese (and butter) that you can imagine, sold whole (like an entire wheel of Brie) or butter in large blocks, and they give you down jackets to wear because you want to spend so much time in there. It really is that cold. But you need to be a professional to go there. 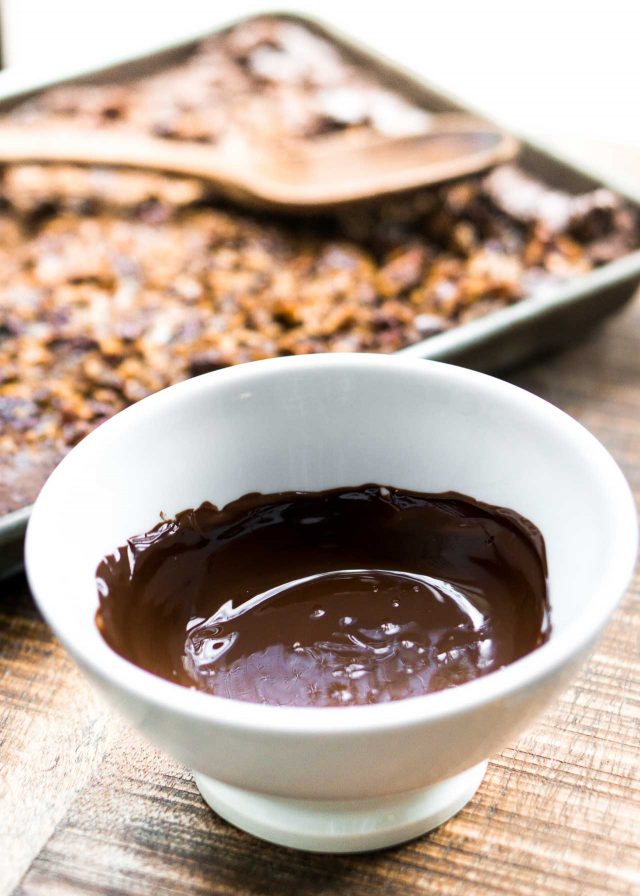 I don’t have room for an entire wheel of Brie – and I’m not talking about in my stomach (which I’d be up for trying…), but in my refrigerator – but I do have room for pecans, which I stockpile as the holidays get closer and closer. Over the years, I’ve made Ginger Pecan Pie and Chocolate Pecan Pie with my precious pecans that I haul back from the States because I’m not schlepping out to the boonies on the outskirts of Paris to get a bag of pecans when I can carry them 5500 miles over the Atlantic. (And sometimes pay extra in luggage fees.) That makes sense. Right?

END_OF_DOCUMENT_TOKEN_TO_BE_REPLACED

Lest you think this is turning into a blog about obscure, leafy ingredients, you might be right. But when I sniffed the very fragrant leaves of lemon verbena, or verveine, growing at a friend’s house near Nice (where we were staying a few years ago), she told me to take as much as I wanted home, and I dove for the clippers. Almost as soon…

END_OF_DOCUMENT_TOKEN_TO_BE_REPLACED

It’s that time of the year again. When bakers, cooks, and even bartenders, are baking, roasting, and shaking things up for the holidays. Here’s a round-up of recipes from my blog, my personal favorites, that are great for Thanksgiving and winter holiday fêtes. There are cakes, cocktails, spreads, dips, candied nuts, cheesecake, ice cream…and more! Pecan Pie with Bourbon and Ginger What’s more traditional than pecan…

END_OF_DOCUMENT_TOKEN_TO_BE_REPLACED

Like most Americans, even French people aren’t so familiar with persimmons. They may see them at the market, look at their curiously, but don’t stop to buy any. Or if they do, they take them home, bite into an unripe one, make a face, and toss them out. One of my friends living north of San Francisco in Sonoma County had an enormous persimmon tree….

END_OF_DOCUMENT_TOKEN_TO_BE_REPLACED

Over the years, I’ve gotten a lot of questions from people wanting to live their dream and buy an apartment in Paris. When buying mine, I learned quite a bit (more than I thought!) but the most important thing was learning the value of having someone on your side who knows the ins and outs, and idiosyncrasies, of the unique world of Paris real estate….

END_OF_DOCUMENT_TOKEN_TO_BE_REPLACED

It’s the season for apple tarts, Fall, when the biggest bounty of apples shows up at the market. I’ve had to learn about all sorts of other varieties of apples since the ones available in France differ from the ones in the United States that I was used to. But it’s been a wonderful journey of discovery and I’ve found unusual varieties that were one day, abundant at the…

END_OF_DOCUMENT_TOKEN_TO_BE_REPLACED

German baking, I don’t think, gets its due. It’s partially because the names of the pastries and baked goods don’t exactly roll right off most of our tongues. Kartoffel-Käse Dinnede, Zitronenbiskuitrolle, Aachener Poschweck, Schwäbischer Prasselkuchen, and, well…I’ll quit now, because it’s taking me too long to hunt down all those keys on my keyboard. And I’d rather be wrapping my tongue around German cakes and cookies, rather than trying to…

END_OF_DOCUMENT_TOKEN_TO_BE_REPLACED

This week I saw the first promise of tomato season. A few brightly colored cherry specimens were brought home from the local market, as well as the more standard varieties. I was down in Gascony visiting my friend Kate Hill, and her photographer friend Tim Clinch was there preparing to lead a photography workshop. Looking for something tempting and colorful, tomatoes seemed the obvious choice…

END_OF_DOCUMENT_TOKEN_TO_BE_REPLACED

Summer in France means a lot of things in France. En masse vacations, a blissfully empty Paris, price increases (which happen during August, when everyone is out of town – of course), and vide-greniers and brocantes, known elsewhere as flea markets, where people sell all kinds of things. If you’re lucky enough to take a trip to the countryside, the brocantes are amazing. But some…