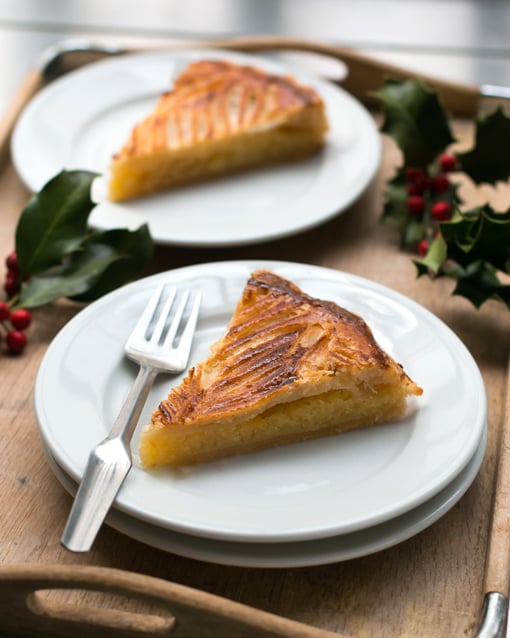 Starting in late December, pastry shops in Paris start jumping the gun, and windows and showcases begin filling up with Galettes des rois, or King Cake, in anticipation of the celebration of Epiphany, on January 6th.

Because it’s such a popular treat, and lucrative for bakeries, the period of availability seems to extend a few more days every year and it’s not unusual for find bakeries peddling them until the end of the month of January. It’s hard to blame them (and those of us who buy them) because they’re so good. Years ago, I used to bake them when I worked in restaurants, and they’re called Pithiviers, named for the town in the Loiret (south of Paris) where they allegedly originated. 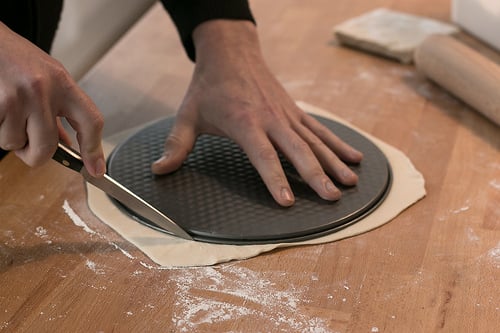 There are two kinds of King Cakes in France; one is layers of puff pastry filled with almond cream, and the other is a circular yeasted cake, more popular in the south of France, festooned with colorful, sticky candied fruit. Although the ones from the south look more festive, there’s something appealing about munching on flaky, buttery puff pastry with a layer of crème d’amandes stuffed inside. (Some use almond cream enriched with a bit of pastry cream, which is easier if you have a bakery, where pastry cream is often on hand.) The good thing about making your own is that you can dial up the almond filling. Plus every year, in addition to extending the period of availability, prices seem to nudge up and I’ve seen some jaw-dropping prices in bakery windows. 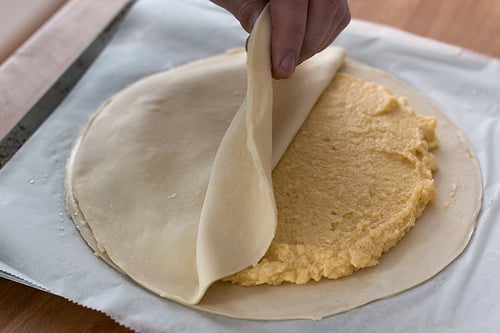 On the other hand, some bakers get creative and use hazelnut or pistachio flour instead of almond, or perfume their galettes with rose, candied kumquats, and even chocolate. Taking liberties with tradition is a tricky thing in France as it’s not always a good idea to mess with a good thing, but it is tradition to bake a fève (bean) into the tart and whoever gets the bean (preferably a child – and crafty parents have learned to cut around the pieces to make sure a kid gets the trinket!) gets to be the roi (king) for the day and wear a gilded paper crown that bakeries often give with the galettes. 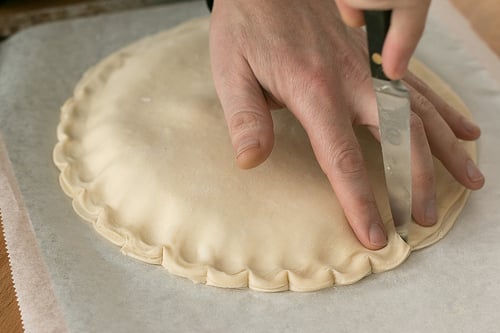 Nowadays les fèves come in all shapes, sizes, and materials. Cartoon characters are popular in France, as are French historical or religious figures. And upscale bakeries like Pierre Hermé, Ladurée, and Aoki, have annual fèves that change. Not only is it fun to see them, but some have become quite collectible. 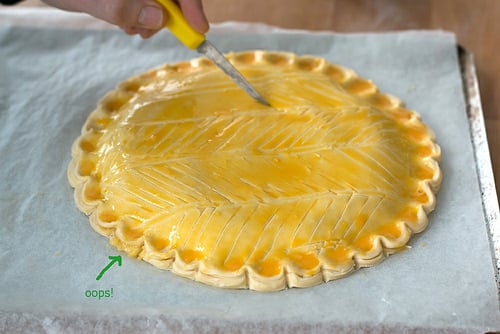 Elsewhere, it isn’t considered a wise idea (ie: hiding things in baked goods) that can be dangerous to young folks if swallowed, so if you want to join the tradition and add a fève, you should be more prudent and use a whole almond or a piece of dried fruit instead. Because who doesn’t want to be king for a day?

(Even those of us who don’t completely enclose all of the filling!)

When working with puff pastry, it’s important to keep it well-chilled and work quickly when rolling as it tends to get stubborn as it warms up. Keep the second piece in the refrigerator until after you’ve rolled out the first. After rolling, brush off any excess flour. And make sure to seal the edges really well to avoid the filling leaking out. NOTE/UPDATE: Speaking of leaking, every year I get a message from someone whose filling leaked out. It's very important to make sure the edges are well-sealed. Use plenty of water and do your best to ensure that the filling is very well enclosed. I'm unable to answer further questions on that subject as that's the best advice I can give you. Frozen puff pastry can often be found in the freezer section of well-stocked supermarkets. Avoid brand that list fats other than butter in the ingredients for best results. If you don’t want to use alcohol, simply omit it or use a few drops of orange flower water in its place. A few people noted in the comments that some of the butter ran out of the tart during baking. Although I don’t do it, some recipes advise that you can add 2-3 teaspoons of cornstarch to the almond filling, which you are welcome to do as extra insurance.