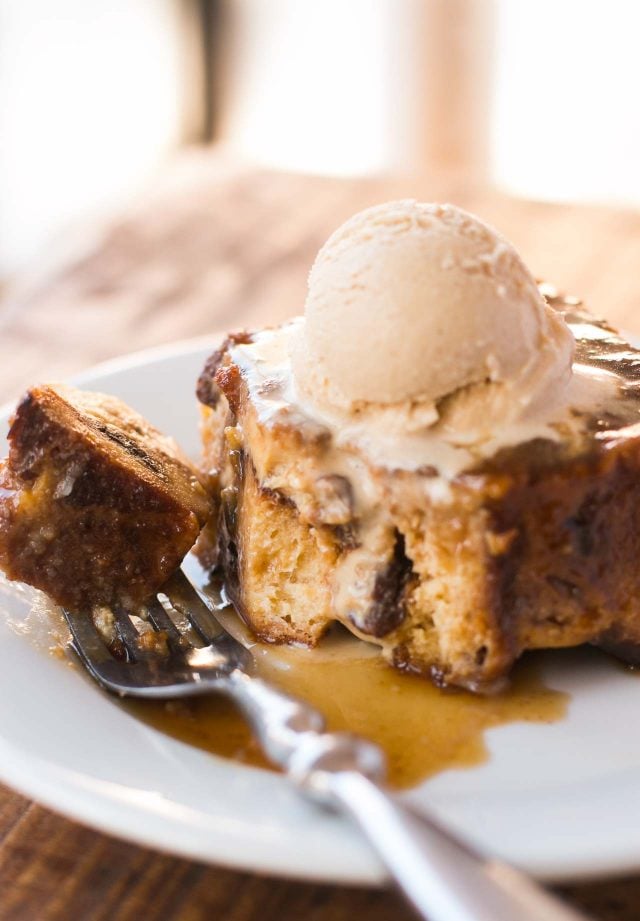 I’m somewhat of a grump about bread pudding. It’s not that I don’t like it, but to me, bread pudding is something you eat at home, like fruit salad. I don’t need someone cutting up a bowl of fruit for me nor do I need someone tearing up leftover bread and serving it forth. Bread pudding is home cooking fare, but if you want to go out and shell out some big bucks for a bowl, that’s fine with me. But once you taste this one, I doubt you’ll find a better one anywhere. 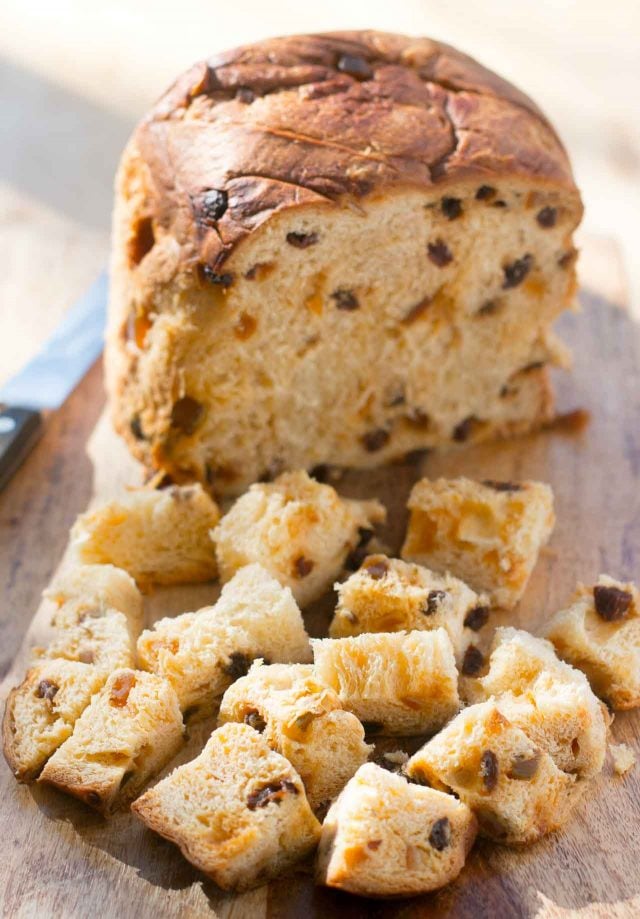 I was inspired to make it while paging through Autentico, by Rolando Beremendi, a terrific book on how to cook authentic Italian cuisine, but without all the preachy baggage. It’s fresh and modern. Sure he’s an evangelical for using the best Italian ingredients, but he makes his case by showcasing some of the beautiful products they have in Italy (Rolando owns Manicaretti Italian food imports, which are sold at Market Hall Foods), such as Tuscan farro, which I used to make his Farro torta the other day, spicy peperoncino piccante (red pepper paste), Sicilian capers, and jars of honey that range in flavors from chestnut to eucalyptus, depending on availability. 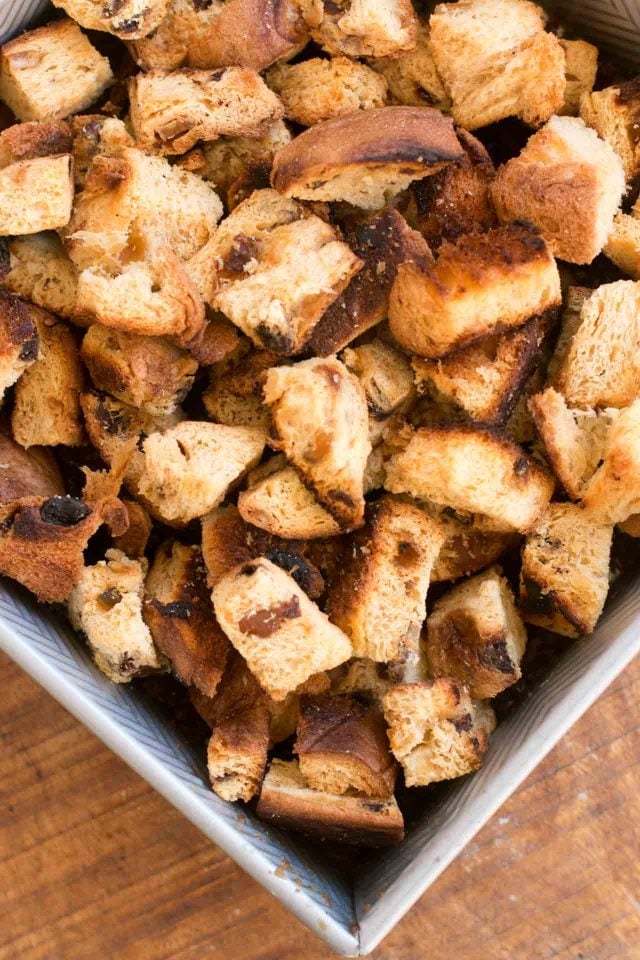 During the holidays, panettone starts showing up on the shelves at markets and food shops. But not just in Italy; panettone has become popular around the world. 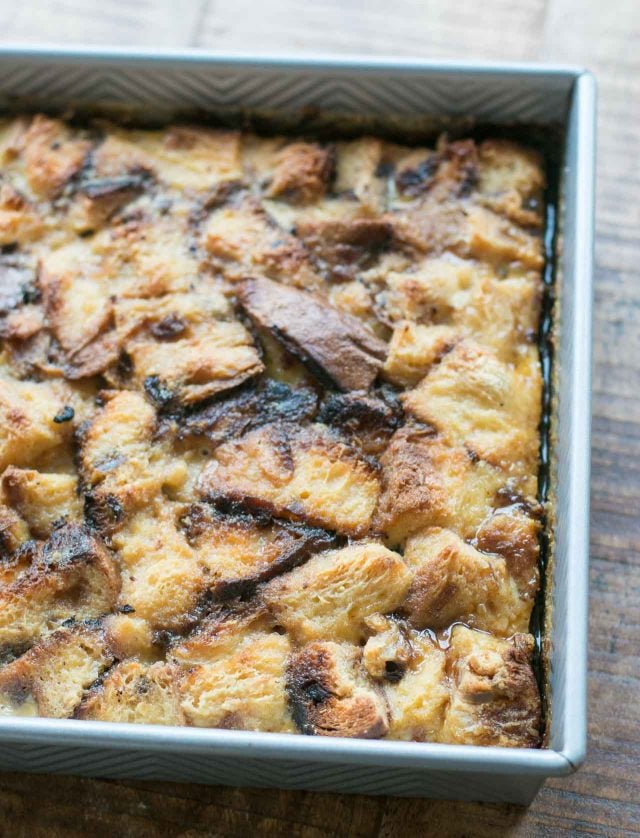 The sweet bread is usually studded with candied fruit, citrus zest, and raisins, which bakers often take in different directions, adding everything from chocolate to caramel. Rolando’s Budino de panettone intrigued me, using panettone as a base, topped with demerara sugar. 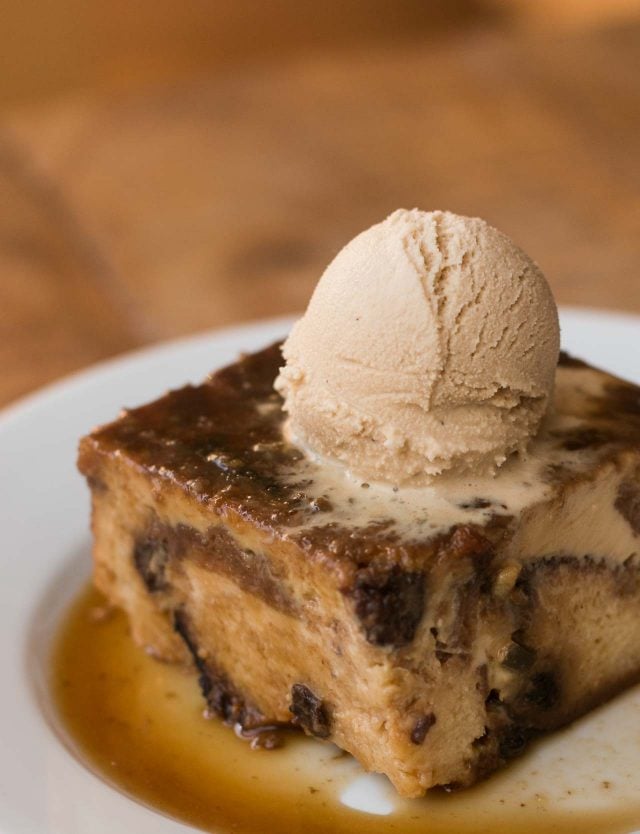 So I used his budino as inspiration for this bread pudding, baked in a pan where brown sugar had been moistened with butter, so it creates a juicy, caramel-like topping, with the bonus of additional sauce to spoon over the bread pudding when it’s turned out. It’s not swimming in sauce, but has just enough so that anyone who wants an extra spoonful can have one. And who deserve an extra spoonful of sauce? 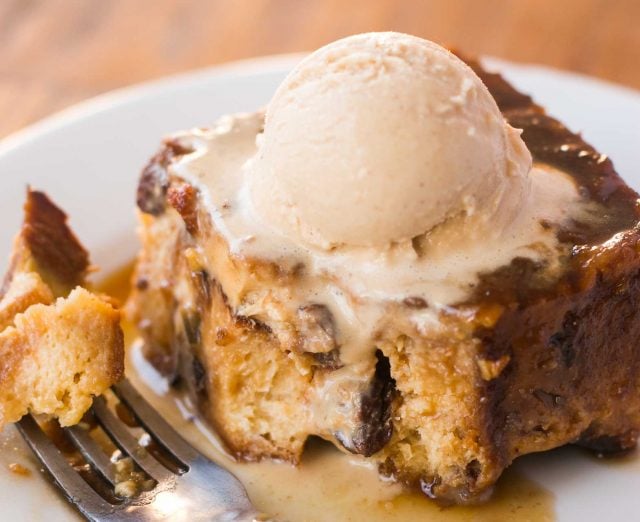 It’s that time of the year, when you may be gifted one too many panettoni. And while you might not think it’s possible to have too much panettone, this is a welcome reprieve from French toast or panettone ice cream, if you do find yourself with an overload of loaves. 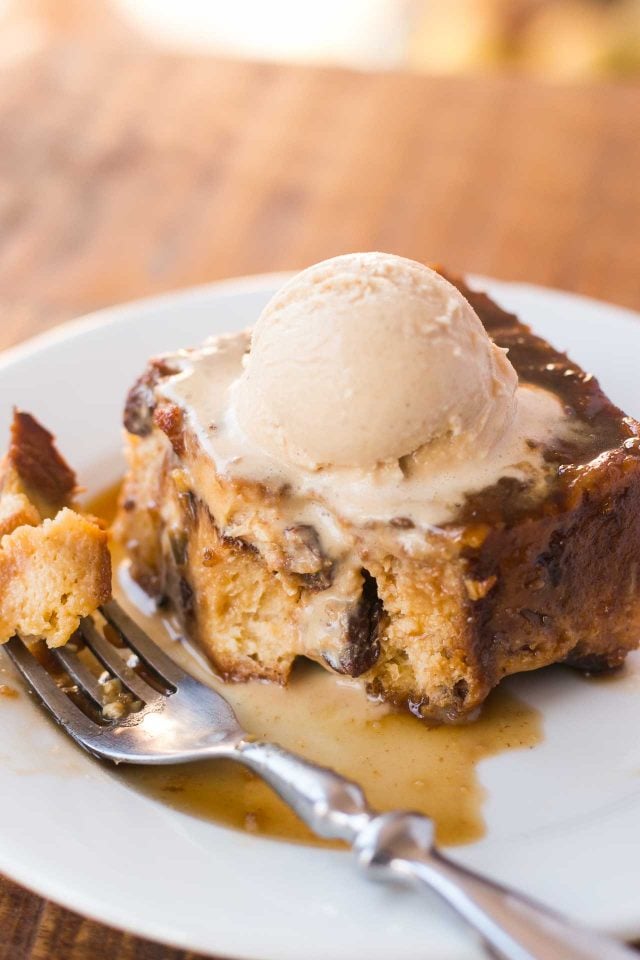 Inspired by Autentico by Rolando Beremendi Because of the brown sugar, that makes a nice, caramel-like sauce while the bread pudding is baking, you've got some leeway with the granulated sugar. I used 1/2 cup (100g) in the custard, but you can dial it down to 1/4 cup (50g), or anywhere in between, since panettone is already sweetened. (And they vary in sweetness, too.) If you don't have panettone, you can make this bread pudding with brioche or challah. Since those breads aren't so sweet, I'd use 1/2 cup (100g) of granulated sugar. I have a fairly heavy-duty square cake pan so I melted the butter and brown sugar together right in the pan on the stovetop. If your pan is flimsy, and you're concerned, you can cook the butter and brown sugar together in a saucepan, then pour it into your cake pan. Don't worry too much if the brown sugar is a bit thick and/or lumpy; once baked, it'll smooth out nicely.
1 1/4 pounds (560g) panettone, cubed (about 9 cups)
3/4 cup (170g) packed light or dark brown sugar
6 large eggs, at room temperature
1 teaspoon vanilla extract
1/4 teaspoon salt
1/2 cup (100g) granulated sugar (see headnote)
3 cups (710ml) milk or half-and-half
3 tablespoons (45g) unsalted butter, cubed
1. Preheat the oven to 350ºF (180ºC). Spread the cubed panettone on a baking sheet and toast in the oven until lightly browned, turning them over once or twice during baking, so they toast relatively evenly. They'll take about 20 minutes or so.
2. While the panettone is toasting, warm the butter in a sturdy 9-inch (22cm) square cake pan over low heat on the stovetop with the the brown sugar, stirring until the butter is melted and the sugar is moistened. Use a spatula to coax it so it covers the bottom of the cake pan, with no bare spots. Remove from heat and set aside.
3. Arrange the toasted panettone cubes evenly in the cake pan.
4. Whisk the eggs together in a medium bowl with the vanilla extract, salt, and granulated sugar. Gradually whisk in the milk until well-combined. Pour the custard over the panettone cubes and press down gently to make sure all the bread cubes are soaking in the custard.
5. Put the cake pan in a larger pan, such as a roasting pan, and fill the larger pan with hot water so it reaches halfway up the outsides of the cake pan. Bake the bread pudding until it feels barely set in the center, but don't overcook it, about 50 minutes. Remove from the oven, and wearing oven mitts, carefully lift the bread pudding out of the water bath and set it on a cooling rack.
6. If serving it warm, let the bread pudding cool for at least 30 minutes. Run a knife around the edges to loosen the bread pudding from the pan and set a large serving platter or rimmed baking sheet upside down over the bread pudding. Grasping both the cake pan and serving platter, simultaneously turn both over, being careful to avoid getting any of the warm brown sugar sauce on you. Remove the cake pan, and cut into squares for serving.

Serving: Some like their bread pudding warm, but this one is equally good at room temperature, or even chilled. You can serve it on its own, with a pour of heavy cream (or whipped cream), or a scoop of your favorite ice cream, such as Vanilla Ice Cream or Cinnamon Ice Cream. I served mine with Sorghum Ice Cream.

Storage: You can refrigerate the baked bread pudding for up to three days. If you want to make it in advance, you can store it in the cake pan, then unmold it before serving. 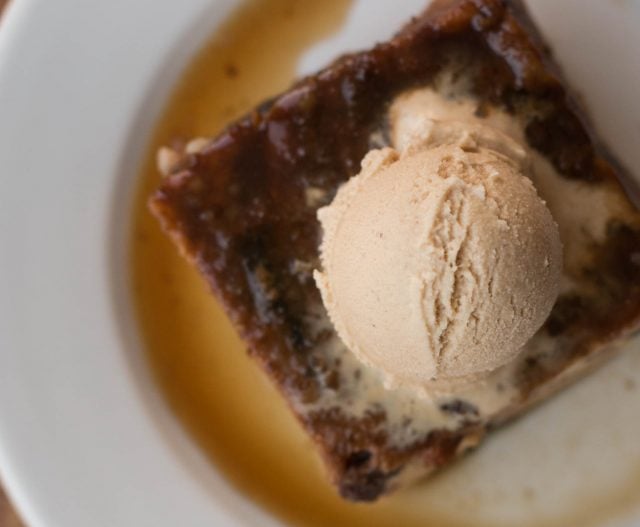