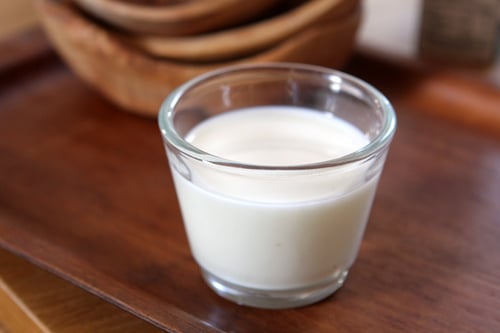 Readers who are unfamiliar with the product, when they find it listed as an ingredient in a recipe, often ask: What is half-and-half?

Half-and-half is a product that is composed of one-half cream and one-half whole milk. In the United States, the fat percentages of those products are 30 to 36%, and 3.25%, respectively. Store-bought half-and-half can be anywhere in the range of 10.5% to 18% butterfat. (Fat-free and lowfat half-and-half items are available, but I don’t use them.) Half-and-half was likely conceived as something to be added to coffee, and was meant to be an item of convenience. It’s a common item in grocery stores in the United States, sold in pints and quarts alongside the milk, cream, and other fresh dairy products.

I use half-and-half in recipes where I want some richness, but not the same richness if full-fat cream was used. In some instances, I’ll offer an option to use either cream or half-and-half, to satisfy those looking for richness versus those looking to be a little more prudent. Like most recipes, always use what is indicated in the list of ingredients.

You can make half-and-half by mixing both whole milk and whipping cream or heavy cream, in equal proportions.

Tips on How to Make Ice Cream