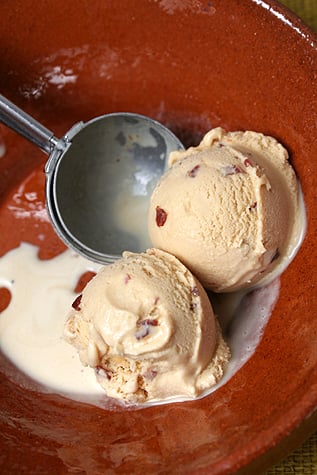 Ok, maybe vegans. And folks who are kosher. And people who don’t eat eggs. Or those who don’t like bacon. But I’m not sure that’s possible. (I have a great bacon joke, but it’s not ‘pc’, so I’d better keep it to myself.)

I’m a big fan of both bacon and the beautiful, bright-orange yolked eggs we get in France, so why confine them to breakfast? I was pretty sure Candied Bacon Ice Cream would work. I mean, it’s got salt. It’s got smoke. So why not candy it? Inspired by Michael Ruhlman, l wanted to see what would happened when they all got together. 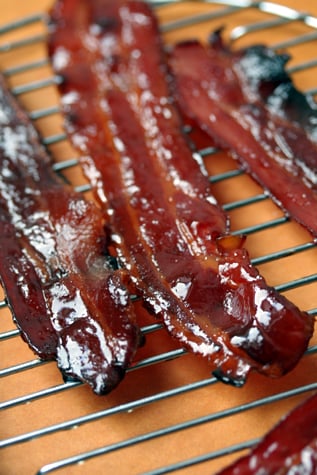 Candying the bacon was a hoot. Being in an experimental mood, I tried everything from agave nectar to maple syrup to dark raw cassonade sugar.

I lined up five strips and baked them off. 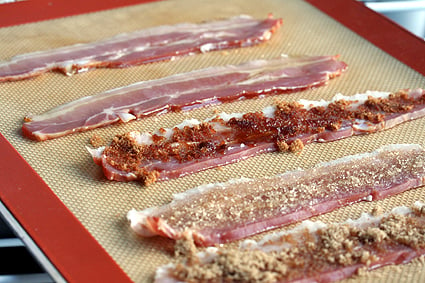 Surprisingly, the best results I had was using regular light brown sugar. The agave nectar I painted on, as well as the maple syrup—which I had impossibly-hopeful hopes for—just slid right off. I suppose I could’ve reduced maple syrup to a thick glaze before brushing it on, but I’m down to the last quarter of the bottle I brought back from the Greenmarket in New York.

And as much as I love you all, I don’t love you more than maple syrup. 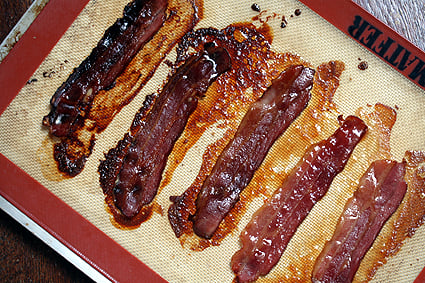 Still, for flavor and crisp-itude, the light brown sugar won hands-down and baked to a firm, shiny-sweet glaze. Of course, individual ovens vary and although I asked my charcutier to cut my bacon on the moderately-thick side (around ¼-inch or ½ centimeter)—if yours is thinner or thicker, keep an eye on it in the oven. American bacon tends to throw off lots of fat, so you might want to bake it on a rack.

(Someone came over to write a story about my kitchen last week and was a bit surprised I didn’t have a microwave. Unfortunately it came down to a space-issue an the monster espresso machine won out. So I candied my bacon the old-fashioned way.)

As I was scooping the ice cream out of the machine and tossing in the bits of candied bacon, getting ready to lick the spatula (hey, pipe down…no one was looking…) I had a last-minute thought that dusting of ground cinnamon would be nice, so I added it. I tend to be pretty restrained when using cinnamon around here since if I offer a taste of something with more than a very light dusting of it to French friends, they have a hard time getting past the cinnamon and I can’t get an accurate evaluation from them.

They do like cinnamon, just not in the vast quantities we American like to shovel in. So I wanted it to be subtle and not off-putting, but present. Aren’t I good at pleasing everyone? Très ‘pc’.

My final test was when I brought a small container of this to my butcher to see what he thought. I didn’t tell him what it was and he took a bite. I waited. He tasted. The priceless look on his face!

Then I breathed a sigh of relief when he polished it off and gave it the thumbs up.

But then again, he’s a little biased. 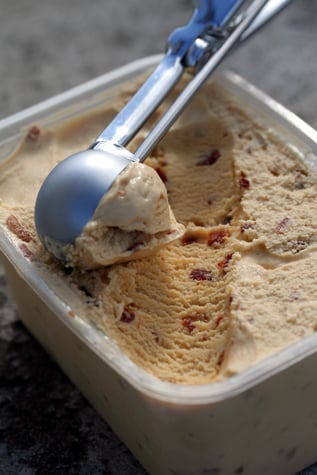 Like my butcher, I loved the salty taste of bacon with brown sugar, but I’m also going to be folding bits of candy bacon into Coffee Ice Cream in the future. Or maybe get really crazy and try little bits in a batch of Avocado Ice Cream. If you don’t have half-and-half, simply mix together heavy cream and whole milk in equal proportions. I’m not sure about dairy alternatives, but since this doesn’t fall into the vegan category, I think this time I’m off the hook. ; )

For the candied bacon

For the ice cream custard

Making Ice Cream Without A Machine

Put your money where your bacon is

Does everything taste better with bacon?