My Favorite Kitchen Tip, Ever 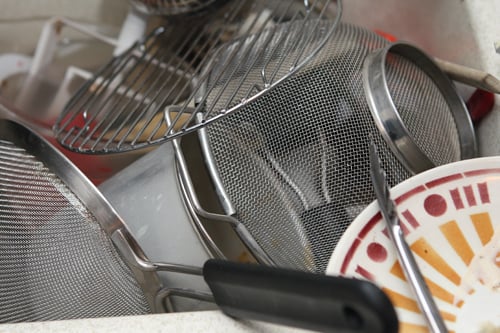 This isn’t the most photogenic of posts, but one of the dirty secrets of writing cookbooks is the dishes. And this season, as the cavalcade of cooking tips comes tumbling forth in anticipation of all the holidays – and the cooking and baking that go along with them – this is the best tip I’ve ever been given.

Most of you probably know how many dishes to takes just to bake a simple cake: a stack bowls, a mixer and the whip, a gaggle of spatulas, and for my fellow Americans, a bunch of measuring cups and spoons. Now imagine if you made that same cake three times in a row, making a few other sets of dishes dirty. Then did it again.

In spite of that fact that I have a real dishwasher, I spend a few hours each and every day washing dishes. It’s funny because when friends call and ask me if I’m free for dinner, sometimes I have to decline because I have to work, and they don’t seem to understand that part of my “work” is washing and/or putting away dishes and pots and pans. It’s a cycle that’s part of my life and when I left the restaurant business, being able to hand off a bustub full of dirty dishes to someone else was something I missed a lot. (If you ask anyone who is the most important person in a restaurant kitchen, even more than the chef, it’s the dishwasher.) 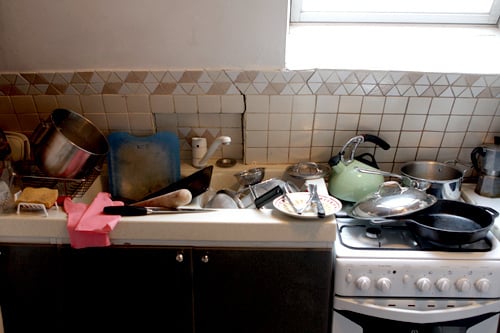 The tip is one I learned from Marion Cunningham, who wrote a fair number of cookbooks

herself, which I’ve adopted. Simply fill the sink with warm, soapy water, and as you finish with dishes, slide them into the water. Later, they’ll be easier to clean after a leisurely soaking, and you can usually just scrape or scrub them with a sponge and load ’em up in the dishwasher. Or finish washing by hand. And with any luck, you’ll get to accept more of those dinner invites than I do. 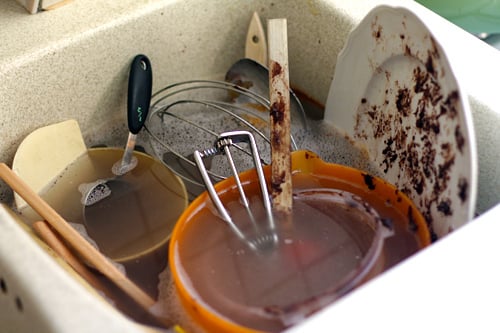 Contrary to what some believe, dishwashers are not necessarily a luxury and using one requires less water than handwashing. There are various opinions about that, but for someone like me who works for themselves, it allows me to do other things rather than stand in front of the sink. So the whole issue for me, if you’ll excuse the pun, is a wash. 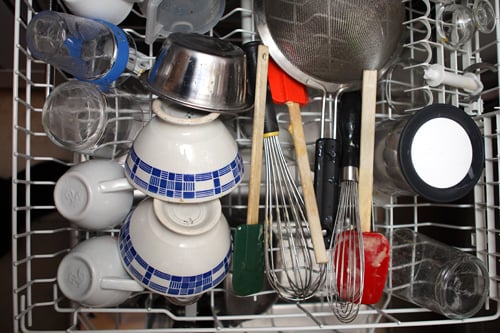 Now if someone could invent a device that prevents people from calling you the moment you start rolling out buttery pie pastry, or stick your hands in a batch of sticky cookie dough, that would be great. 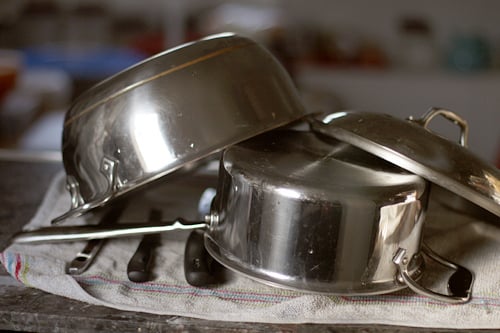 A couple of other useful home cooking and baking tips I’ve culled from my experience:

–Leave frequently used pots and pans on the stovetop. Putting them away and taking them out again, over and over, is a lot of wasted time and work. 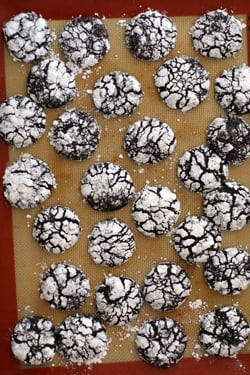 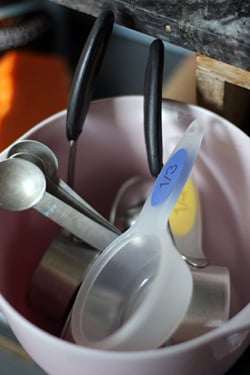 –Keep graduated measuring cups and spoons in a bowl on the counter rather than in a drawer, where you have to fish them out every time you want to use them. And you don’t have to fuss with stacking them together all the time. Or switch to using a scale. And if you use a scale, be sure to always keep spare batteries on hand; there is nothing worse than your scale running out of power when you’re in the middle of a baking project.

-If you’re space-challenged, set up an ironing board to use as a temporary extra shelf. 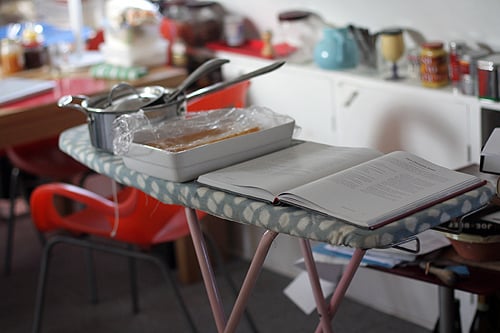 –Never, ever run a cooking knife through the dishwasher. The high heat can ruin the blade, as can it being knocked around with other dishes and objects during the cycle. And there’s nothing less-enjoyable or dangerous than to try to cut something with a dull knife. If you don’t have them, the only three knives you truly need are a chef’s or Santoku

knife, a paring knife, and a serrated bread knife.

–Avoid swapping out ingredients. Recipe writers spend a long time developing recipes so they work with the ingredients presented. If you use other ingredients, your results won’t be the same and for all your hard work (and dishes you’ll be washing) you won’t be happy. Keep things on hand so you don’t run out, especially during the busy holiday season.

–Buy in bulk, especially things like butter, sugar, flour, and chocolate. Even if you don’t have a lot of room, keeping the basics well-stocked in your pantry will save you a lot of time running back and forth to the grocery store. Butter stores well in the freezer and even though good chocolate is expensive, buying a 5- or 10-pound block reduces the price dramatically.

–Use excellent chocolate for dipping, okay chocolate for baking. I love chocolate and when I eat it, I buy artisanal brands or the best I can get. For baking, when the chocolate is going to be melted, then mixed with flour, sugar, butter, and other ingredients, I use a medium-grade chocolate. It doesn’t matter which one I like, choose one that you like, and what’s available to you. Around the holidays some stores sell chocolate in bulk in anticipation of customers doing a lot o holiday baking. Buy it. (If stored in a cool, dark place, dark chocolate will keep for up to five years.)

–Don’t toss that sponge. I’ve been using the same sponge since 1975 and it’s lived on three continents. (Just kidding.) But you can bleach a sponge and bring it back to life. (And yes, I am aware that bleach isn’t the most ecological item, but I live in France and if we don’t go through at least 2 liters a month, the locals start getting suspicious.) I put it in a bowl with a spoonful of bleach and add water so the sponge is saturated. Then let it sit. After about thirty minutes, I take it out carefully, and squeeze it clean under running water wearing my trusty rubber gloves.

-Speaking of which, wear rubber gloves for washing dishes. Your skin and hands will thank you after a few years of dishwashing. Invest in a good pair since the cheap ones break and tear easily, and need constant replacement.

–Get an oven thermometer. Ovens are notoriously off temperature and I keep one in my oven all the time to make sure baking temperatures are on track.

–Check before the indicated cooking time for doneness. Ovens may be the exact same temperature, but surprisingly, each can cook differently. Cooking times can also vary depending on the material of the baking pan or cooking dish, or perhaps if the item going into the oven is already warm or has been cooled down (as in custard mixes), so check for doneness before the time indicated. When I worked as a professional cook, I rarely used a timer. I found my instincts and senses could tell when something was done rather than slavishly counting seconds and minutes. Trust yourself in the kitchen. Chocolate cakes and other desserts are notoriously finicky, and usually benefit from underbaking rather than overbaking.

–Keep an open garbage can handy, rather than one that you have to keep opening a door or lid to get to. Rachael Ray recommends keeping a bowl on the counter for the same purpose (and she even sells one), although I suspect she has more counter space than I do. And I am pretty sure you could get by with just a tall bowl that you already have on hand.

–Buy extra spatulas, whisks, measuring cups and spoons, and an extra bowl and attachments for your stand mixer. Most of these things are inexpensive and last a long time. Having extras will reduce the amount of time you have to start and stop while in the middle of baking projects to clean up.

–Read recipes through before making them. Although I’m working on doing this myself when making someone else’s recipe, when I write a recipe, I try to say in a recipe what size bowl to use, since it’s kind of annoying to put a few spoonfuls of something in a large bowl only to find out you’re adding it to something else.

–Above all, stay calm and relax. There are some really serious problems out there. Having a cake come out goofy, burning a tray of cookies, dropping a bowl of custard mix, not getting everything to the table at the same time, isn’t the end of the world. When I’m having a bad day, or whatever, I’ll stop to think about how lucky I am to have electricity, heat in my apartment, a roof over my head, a comfortable bed to climb in to every night, friends and family to share good food with, and yes, even a sink to wash dishes in. 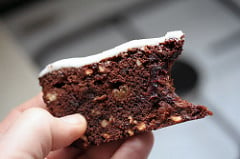 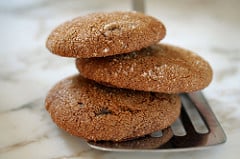 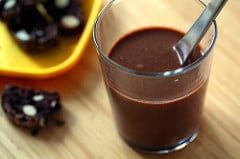 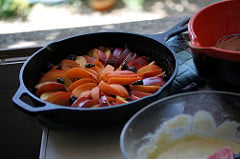 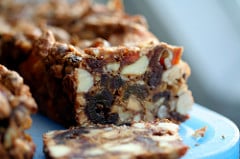 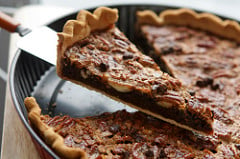 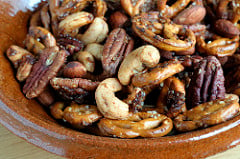 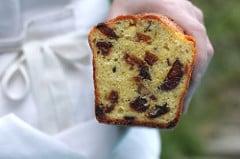