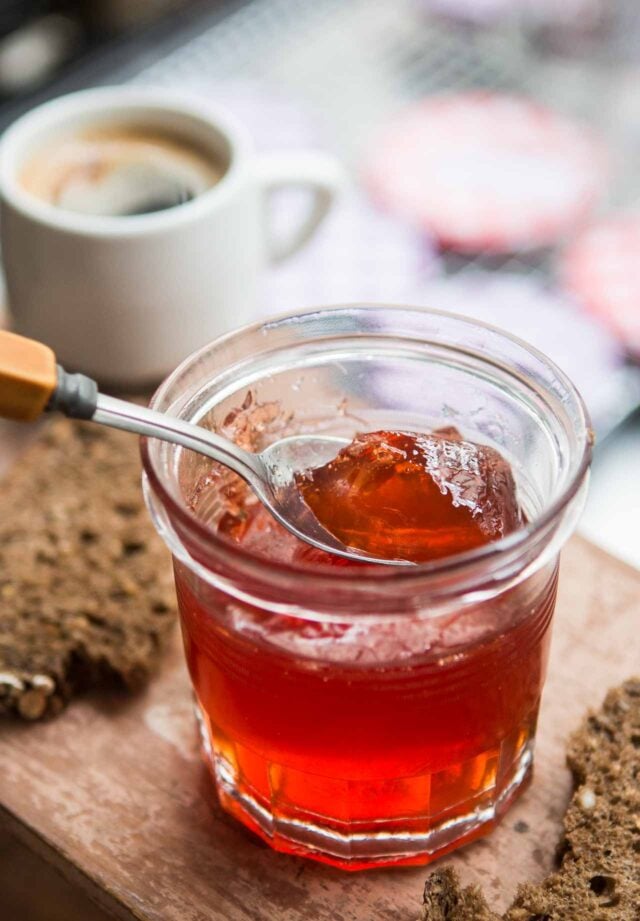 I was recently reunited with something I miss very much – a loaded apple tree! Friends of mine who had a house in the French countryside had a tree that, come fall, had so many apples, the limbs threatened to break off. Not wanting to be an accomplice in apple-cide, I decided to do my part to save the tree, and the apples, and make Apple Jelly. 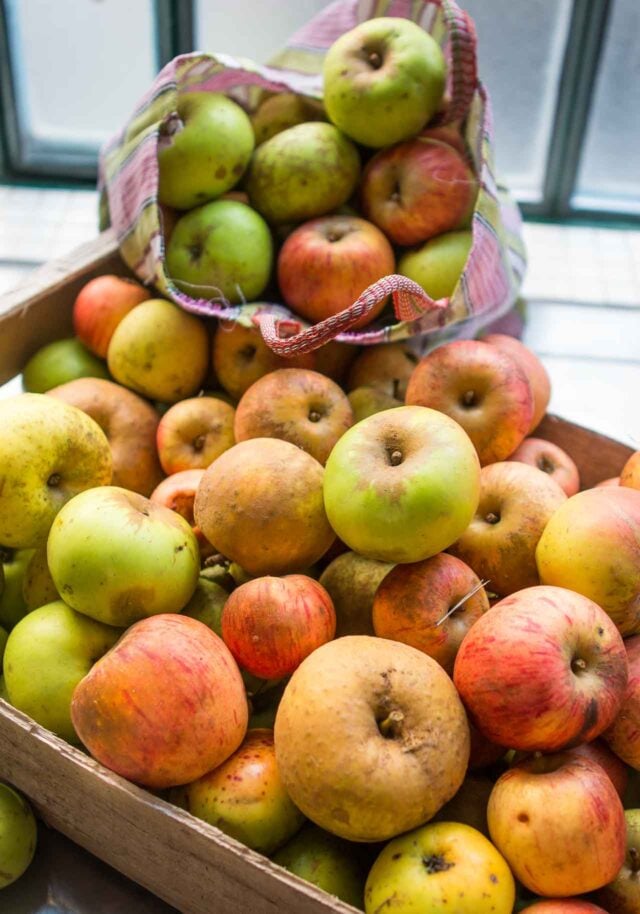 Ten years later, my friends sold their house, which ended my bounty of apples (and medlars.) So how happy was I when some other friends bought a house in Brittany, which had not one, not two…but four apple trees. Score! 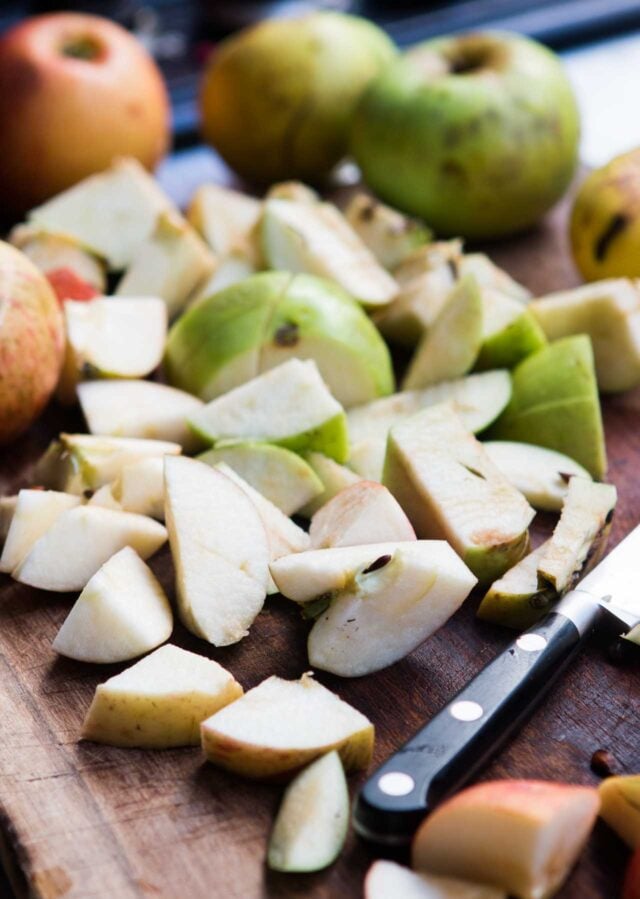 The varieties were Reine de Reinette, Canada, and Boskop, which I found out when a concerned neighbor saw someone (me) swiping apples off the trees, and the ground, loading up sacks of them. I think he figured I was pilfering the pommes, but was reassured when I told him I was friends with the owner of the mini-orchard. 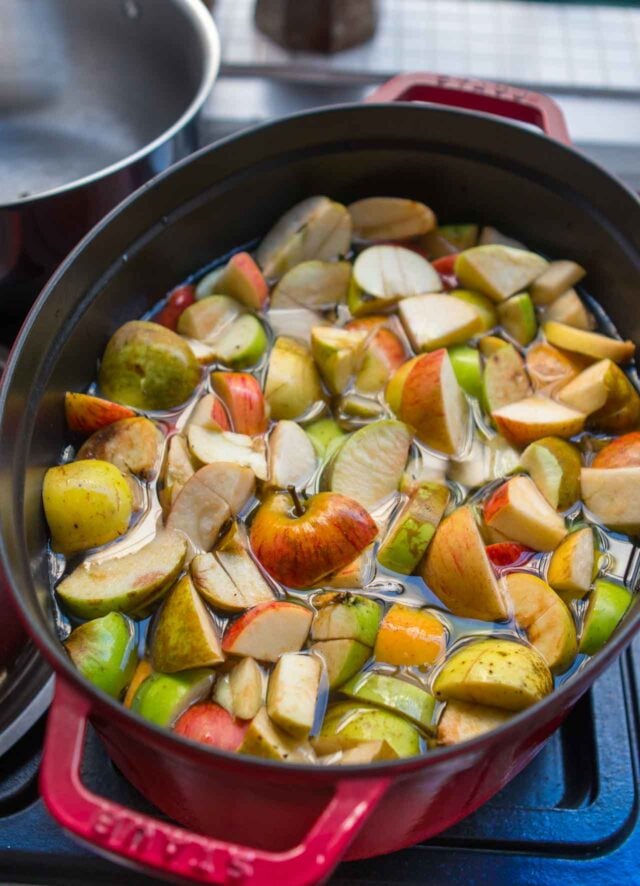 After talking with him a few minutes, I realized he was an expert on the apples and not only knew about the varieties of apples, but also what to do with them and nodded in approval when I told him I was going to make Apple Jelly. He was happy to help me fill some bags, which included green varieties, which are high in pectin and help the jelly set, and are more acidic than other apples, which make the jelly well-balanced and delicious. (Calvados, the famed apple brandy from Normany, use very acidic apples since the flavor is more pronounced once cooked.) 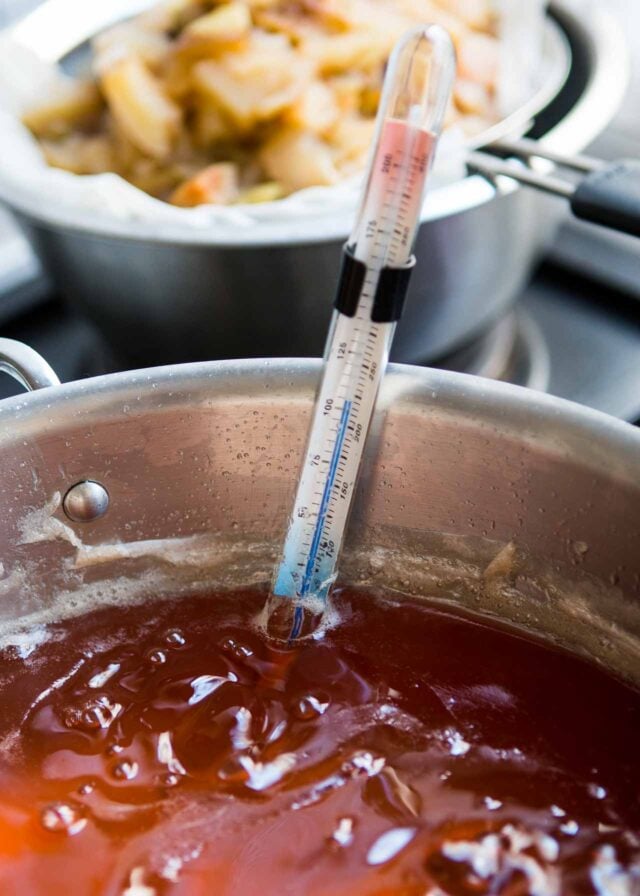 To make Apple Jelly, it’s probably a good idea to either a friend with an apple tree (with an explanation ready in case a neighbor comes by…) or get apples from a source where they might sell you apples that are dented or dinged, which are called pommes à cuire (cooking apples) in France, and are quite popular. At the markets, those apples are usually the first to get sold as people use the bargain beauties to make compotes and tarts with. And French bakers like to use a variety of apples in dessert, like Apple Cake, as the flavor is more interesting than if using just one variety. 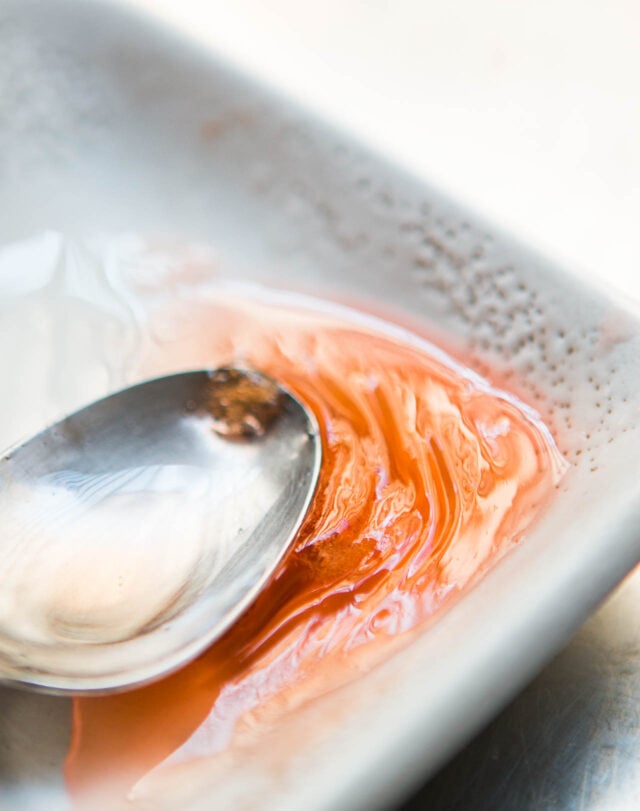 In the end, I came home with over 50 pounds (23kg) of apples in all shapes, colors, and conditions. And all went to a good cause. This recipe uses a good deal of apples but makes a half-dozen jars, which is good if you’re anything like me and need to reward your friends, and perhaps a local apple expert, with a jar of jelly. 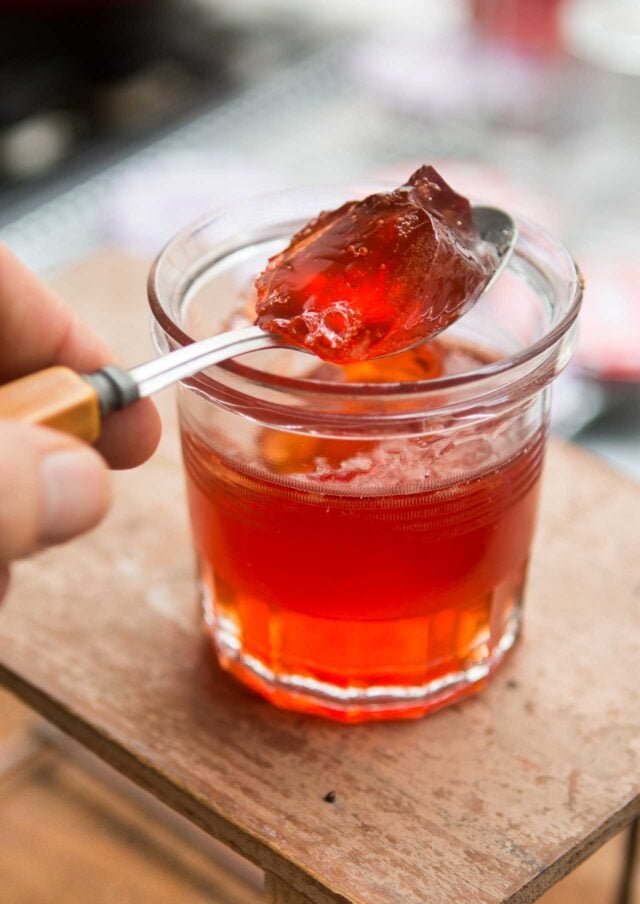 While some sources say to National Center for Food Preservation cook the apple jelly to 220ºF (104ºC), every time I've made this, it jelled at around 230ºF (110ºC). So it’s best to use a thermometer but also to test your jelly by dropping a dab on a chilled plate, putting it in the freezer for a few minutes, then checking to see if the mixture has jelled by nudging it and seeing if it mounds and wrinkles, as shown in the post. If you don’t have a candy thermometer, you can use the "nudge" method to test your jelly. One pound (450g) of apples cooked will yield about 1 cup (250ml) strained juice from the cooked apples. So if you have fewer apples, or you get a different yield (since all apples are different), you can use that as a guideline and add 3/4 cup (150g) sugar and 1 1/2 teaspoons of lemon juice per cup of strained apple juice. You can easily halve this recipe, too. Note that in step #3 depending on the size of your strainer or colander, you may need to use two, as I do. One tip is when putting the apples in the strainers if you can't get them all in, after filling them up, let the mixture sit 5 to 10 minutes; it'll settle down and compress, and you should be able to add the rest after that.
Servings 6 jars, 1 cup (250ml) each

Storage: I don’t preserve my jelly or jams in heat-treated jars because I eat them quickly, but store mine in the refrigerator where they’ll keep for several months. If you wish to preserve them, you can find instructions for canning at the University of Georgia website. Notes: The cooked apples can be passed through a food mill and used as applesauce, or for Chewy Oatmeal Raisin Cookies, Nonfat Gingersnaps, or my favorite Granola recipe. Any foam scraped off the top of the jelly while cooking can be refrigerated or frozen, and added to your next batch of jam. It's especially great used in jams made with low-pectin fruit, such as strawberries, apricots, peaches, pineapple, or cherries. 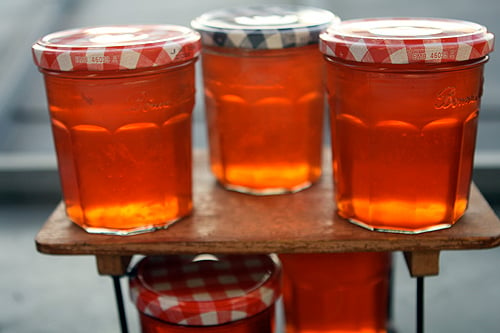