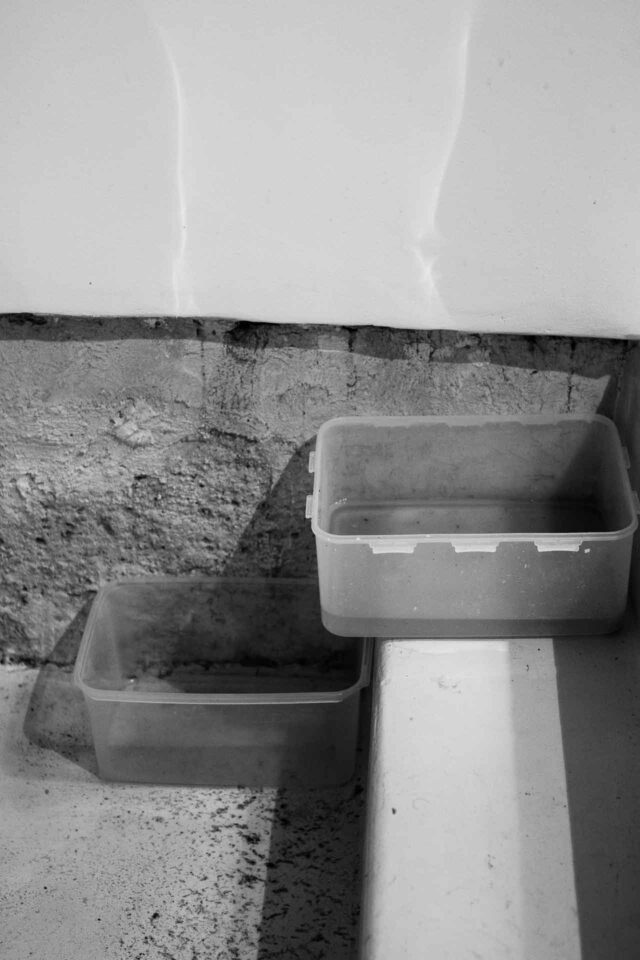 Anyone who has kids, or a puppy, can relate. I don’t have either, but after all we’ve been through together, I now have a similarly intimate relationship with my apartment. One afternoon at the end of last week, I came home from lunch and the moment I stepped inside my place, I felt something was wrong.

Standing in the doorway, I heard a faint trickling noise in the background which, as I got closer to my bedroom, realized the trickling sound was more of a steady stream. And sure enough, as I got closer to la source, water was cascading out of several holes in the wall. Although I’ve experienced a lot of things here, arguably more than most people have, I haven’t had the very Parisian experience of une fuite d’eau: a water leak.

I was going to use the conditional and say that almost everyone I know has had to deal with a water leak, but come to think of it, I’ll remove that “almost” and go so far as to say that I’m sure that everyone I know has had one. Leaks are to be expected in a city that’s a few thousand years old, and if you’ve ever wondered why apartments in Paris have so many pipes running down the outside of the walls, it’s because they’re easy to deal with when the inevitable leak occurs, rather than when they’re hidden in the walls, as (of course) mine are. Because plumbing can be so tricky in Paris, it’s why in some apartments, everything; the sink, the dishwasher, the washing machine, and sometimes, even the toilet and shower, are in the kitchen, it’s because of the water lines.

While the plumbing hasn’t been around for centuries, some of it behaves as if it has. The shower in my previous top-floor apartment was only equipped to give me a mere gallon of tepid water before returning to icy-cold, so I became a world-class speed showerer. Living on the top floor, thankfully I never had a problem with leaks from neighbors above. Although come to think of it, I remember the neighbors below once came up and knocked on my door to tell me they had a leak that was probably coming from my bathroom. (I don’t remember if I asked it was a gallon of water, or less, as it would have been easy to pinpoint that it was coming from my shower.) As a renter, I probably wasn’t as interested in their leak as I should have been. On the other hand, they had a habit of coming home well after midnight and blasting music on two DJ-quality speakers that sounded like it came from a stereo that could be cranked jusqu’à numéro 11, so I wasn’t exactly that interested in making sure they had a happy home.

Water leaks bring up a lot of issues that are hallmarks of Paris: Distrust of big companies (especially insurance companies), problems with contractors, malfaçons (bad construction), and uneasy relationships with neighbors. After my bizutage (hazing), I’m on fairly good terms with almost everyone in the building, but one stubborn holdout who shares a wall with me refused to open the door to let me into her apartment to see if she had the same leaks in her place, or if they were coming from there.

I was with the well-dressed woman from the property management company and after knocking on her door several times and hearing faint noises of movement behind it, the woman who I’ve never actually had the pleasure of meeting during our last seven or eight years living side-by-side, finally opened the door, looking at us as if we were hardened criminals searching for cover. True, I was wearing the $2.99 basketball shorts I got at Deals and Discounts II in Queens, and rubber flip-flops, a reasonable outfit for bailing water IMHO, but I was holding a phone and pocket flashlight, hardly tools which suggest criminal intent.

Water problems have followed me most of my adult apartment life. When I moved into an apartment in San Francisco, one morning I woke up, slid out of bed, and placed my feet on the floor…and found myself ankle-deep in a few inches of water. No one could locate the source until I was at a nearby bakery one morning and noticed the photos on the wall weren’t of some bucolic farm in the hinterlands of California, but what our neighborhood looked like before it had streets and houses. It was basically a big lake with several farms around it. So when it rained, the water from the lake did what water does, and rose into my bedroom.

There’s some expression about those who forget about the past are condemned to repeat it. I haven’t forgotten about my past, either in San Francisco or here. But somehow repeating it was in my cards. Or rather, in my bedroom, once again. 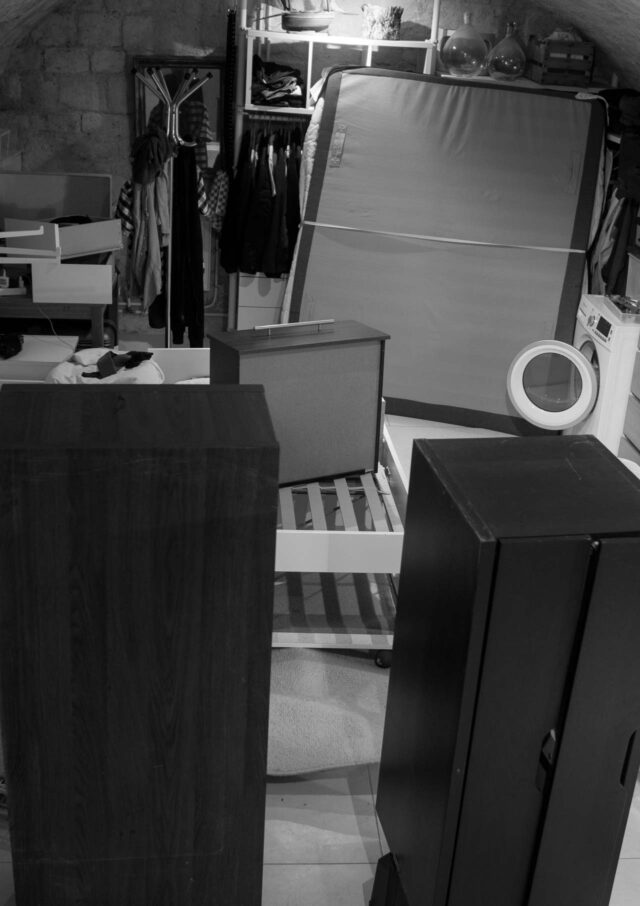 The first thing I did was save the Ikea furniture. I didn’t care about clothes or shoes or wine or the carpet. I just didn’t ever want to ever have to assemble any more Ikea furniture in my life than I have to. Those hand weights I got for online fitness classes during the confinement last spring came in handy for raising the bed. And the hours of ab work I got from online Pilates classes finally came in handy when I had to lift the bed to get the weights underneath it. Romain looked at me as if I was a mom displaying superhuman strength when a car is on top of her baby and without thinking, lifts it up like it’s made out of styrofoam. Let me be clear: There was no way I was going to assemble that Ikea bed frame again. That bed frame was my baby (…and like those moms, we also share the struggles of a long labor, it took me about a week to assemble it…) and I was going to do whatever I could to save it. 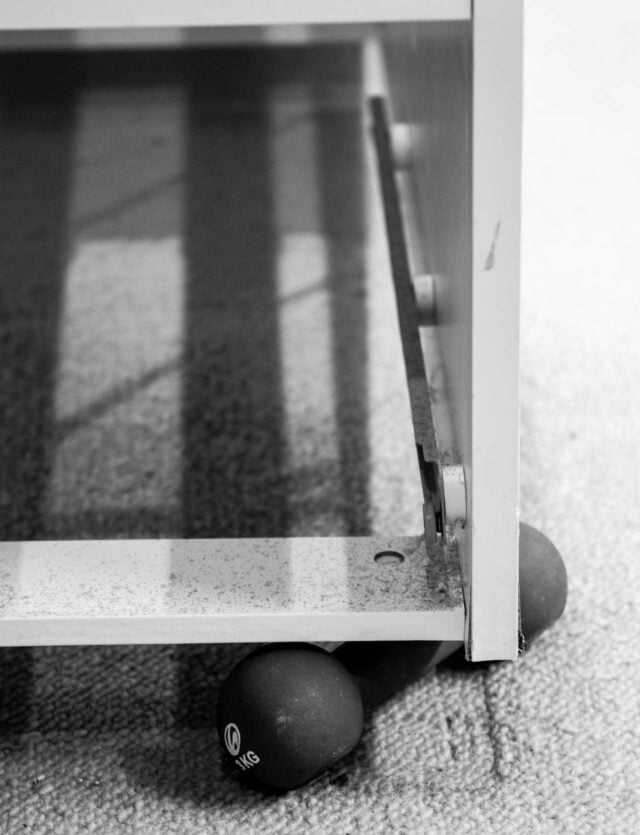 Being more French than I will ever be, Romain said that we immediately needed to go on the offensive. I have a friend whose entire water-logged apartment has been held up for years by a massive wooden structure and scaffolding built inside her apartment as the neighbors, insurance companies, and property managers battle things out. It rivals the scaffolding holding up the badly damaged Notre Dame, but is in a different part of town. Her sister is also dealing with a water leak issue on the opposite end of the city, as is an artist friend of mine who had a water leak that damaged all of his works in his studio. And speaking of studios, every time I go to Pilates and am lying on my back waiting for another round of abdominal exercises to begin, my eyes wander to the ever-widening grey water stain in the upper corner of the ceiling, which seems to be spreading at about the same rate as my midsection now that summer beach-body season is over. (Not that anyone is looking at me on the beach anymore, except Romain. And he’s stuck with me, no matter what.)

Fortunately the plumber the building sent over was a hottie and I can honestly say that plumber’s crack isn’t always a bad thing, and I had no trouble overseeing him while he worked. It’s been a relief having him here, whether he fixes the problem or not. He’s coming back again to tear down the wall this week and I’m wondering if I’m a bad person for scheduling him for when Romain is at work. 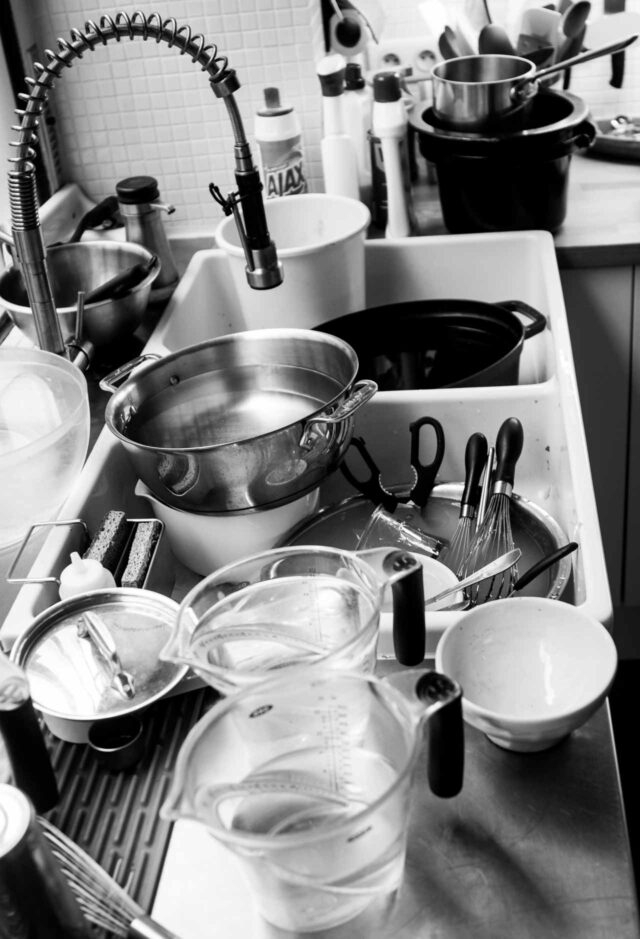 In the meantime, I’m hunkering down for my first week of emails, phone calls, paperwork, registered letters (which are the bane of everyone in France as they always mean bad news, which is why one employee at La Poste told me that 90% of them never get picked up), adjusters, neighbors, property managers, and wringing out towels. One piece of good news is that the water is, uh…just water, and only water. It’s not the overflow of someone’s toilet. I’ve heard about that happening here, too. I can’t imagine anything worse than actually being dans le merde, which usually just means you’re in trouble, not that you’re truly in the you-know-what.

One upside is that I may have found my material for season three of L’Appart, whenever it makes it to the small screen. And Romain has made good on his promise to launch an all-out offensive on everyone involved, and not letting go until he gets an answer. As someone who’s not especially good at confrontations, even though I’m on social media (last week I had a few doozies…), it’s nice to have someone on my side who is. And I’ve filled buckets of water so I can get some cooking and baking done.

(Another upside; The neighbor in the other apartment next to mine was thrilled to finally meet “…the guy who everyone says is a baker!” And another woman in my building who after she took a peek and saw the water, I told her if she was interested in taking a swim, she could come back later with her swimsuit and go for a dip, which gave her a good laugh. Oh, and the woman at the post office who tersely corrected the address of the insurance company on the envelope gave me a break, and a knowing nod, when I told her about the inondation. Like everyone in Paris, when you mention you’re in the midst of a fuite d’eau, you get a little extra leeway.) 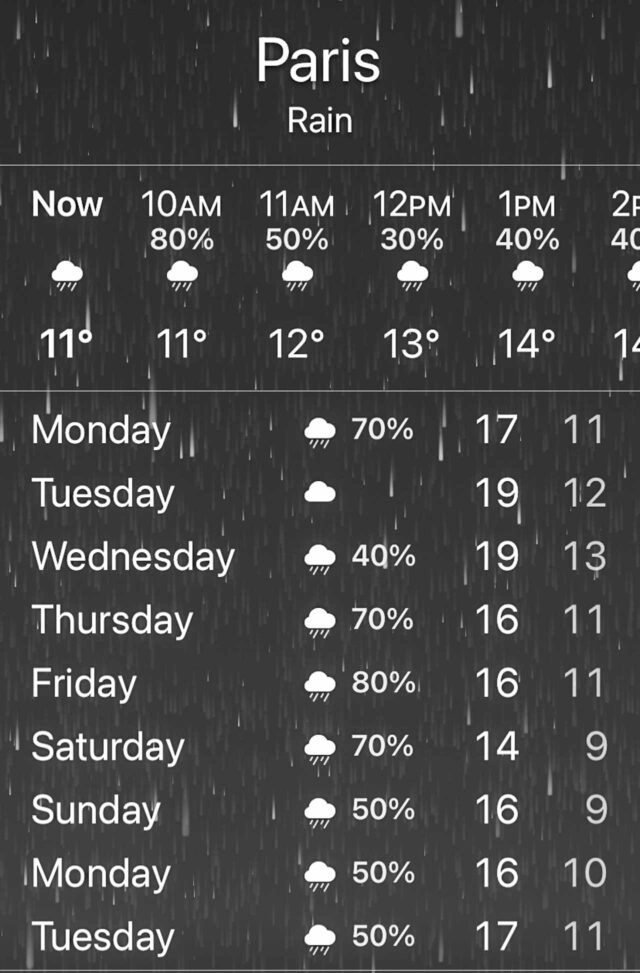 So letters have been written and mailed, emails and text messages sent, and dossiers (files) started. The downpours are taking a break tomorrow, and the water has been turned off until we figure out where it’s coming from. The plumber is on his way back and I’m batting 2 out of 3 in terms of befriending the neighbors, so things could be worse…all things considered.