5 Absolute, Surefire Ways to Get Rich in France 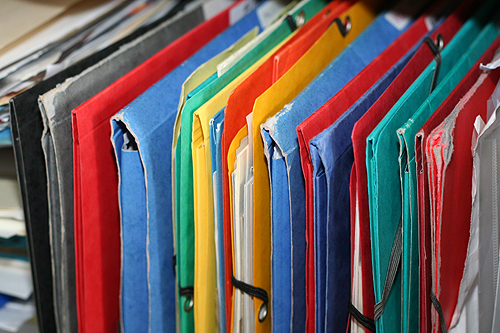 The most prevalent fixture in every French home isn’t the gleaming shelf of copper cookware, the bottles of medicaments crammed into every nook in the john, or their collection of books, which the French hold in the same reverence as Americans do their flat-screen televisions and their iPhones.

No, it’s the shelf of classeurs, the sturdy, colorful cardboard folders to hold the massive, sprawling, spiraling out-of-control amount of paperwork your accumulate here, in the form of les dossiers, which are the two most important words in the French language.

You quickly learn to never, ever, ever, throw away even the tiniest, most insignificant piece of paper or receipt in France because invariably, six years later, someone will ask you to produce it. So it’s imperative to save each and every scrap of paper and because of that, soon you’ll find you’ve accumulated your very own stack or dossiers.

I know, because I have at least fifty. Or more filed away somewhere.

When I arrived, I shipped a container of furniture over, which required payment at the port of entry. I paid by check, brought the paperwork home, and had my chairs and couch delivered. Two years later, I got a bill demanding payment. I couldn’t find the receipt anywhere, and since French banks don’t…and won’t…give you copies of your cancelled checks, I spent endless weeks calling back-and-forth. And while the woman at the company definitely agreed with me that they wouldn’t have released my belongings without my payment, they needed a copy of the piece of paper attesting to the fact that I paid.

Six years later, we’re almost finished battling it out. (“Soon…” I keep saying to myself, as I file another stack of papers away, “Soon…”)

So all those little bits of paper need to be sorted and classified. And anyone who wants to make a fortune should go in the business of manufacturing them. Imagine a country of 64,000,00 people who have lived here ten times longer than I have—and that’s adds up to a heckuva lot of classeurs, folks.

Coming up soon is my visa renewal, which most of us foreigners have to take care of annually. For some reason, they can’t tell me how long one has to live in France to get a Residency Card. Last year, the woman at immigration said, “I don’t know. We don’t have that kind of information!”

I wanted to point out that since she works in immigration, perhaps she might privy to immigration information, but that’s just me being silly.

To renew one’s visa, each year, you’re sent a long list of documents that you’re required to produce. It’s an ever-changing kaleidoscope of paperwork, some of it seems obvious, while the others, not so much. (Like a copy of each of my phone bills for the past year. Do they really need confirmation that I have a telephone?) And each sheet of paperwork needs to be photocopied—in triplicate.

But before you gloat about your perfectly-assembled and photocopied dossier, when you sit down for your appointment, they’ll push it back in your direction, and spring a new one on you that’s completely out of left field—like, where’s your father’s army discharge papers? Or didn’t you bring a DNA sample from your circumcision, with a signed pediatric physician’s note attesting to the fact that, yes, indeed, it is from your…? um...whatever. And where is that attestation from your sixth grade teacher attesting to the fact that you did, for sure, properly make it through fifth grade?

And—yes, each needs to be notarized in America on a date that’s within ten days of your appointment of your visa hearing.

And then photocopied. Thrice.

So you arrive with every piece of paper in your possession, although I’ve gotten smarter now; I simply wheel along every dossier I have, since they’re bound to ask for something from one of them. But I’ve gotten especially savvy and arrive with a bulging pouch full of coins, too, since invariably there’s some document or piece of paper in one of my folders that they’re going to require which of course needs to be photocopied—yes, in triplicate.

You head to the lobby, which is a parking jam of humming Xerox machines.

Of course, the change machine is broken, and there’s scores of immigrants in tears, madly rifling through their pockets for any bit of coinage.

(I should bring extra and sell it to them, which is a slower way to make my fortune, but I don’t have very good business sense. But that’s not to say you can’t…)

Whoever owns those machines is making more money that Steve Wynn in Vegas, where the odds are better, since dropping coins in one of the photocopiers often results in nothing coming out either. And there’s no address or anything to get a refund, so it’s like getting free money!

What are you waiting for?

Paris is the most visited city in the world. And lots of those visitors actually shop and end up buying something. I know, I know. Go figure.

But more often than not, some of those visitors buy too much and have to haul it home. Except few stores will ship anything, probably because they’ve had the some experiences that most of us have had getting anything delivered.

(A French friend advised me if I’m expecting delivery to write my name on my forehead and stand in my doorway, with the door open, all day, until it arrives.)

You’ve probably been there too, and most harried travelers are willing to simply slap down their credit cards and have their items whisked away and shipped right to their door, easily and assuredly. Sure it’s a bit more expensive, but when you’re frantic, and with the airlines recent luggage restrictions, someone should open a pack & ship place in Paris. I would imagine a zillion people would be more than happy to drop them off, have their purchases wrapped up and sent to them.

And there’s be less people walking around with their names emblazened on their foreheads.

(Useful tip: If you’re going to write your name on your forehead, don’t use a permanent Sharpie.)

When I moved to France in 2002, I was literally stunned by how expensive mobile phone service was in France. In America, my last plan was $30 for 3000 minutes, or something crazy like that, so I could yack all I wanted. Although prices have softened ever-so-little here since I arrived, with my current mobile phone plan, I’m paying 20€ ($32) for 60 minutes of outgoing calls. That means I’m paying about 30 centimes a minute to chat. Which explains why, if I call you, I’m talking at lightning-fast speed.

There are three companies in France, and each one charges the exact same price. I’ve asked why one company doesn’t say to themselves, “Hmm. Perhaps if we lowered our prices, so we’re less than the other companies, we’d get more customers. Aha!“

But no one seems to know, and everyone just shrugs it off, saying “C’est un monopole.”

(I’m not sure how three makes a monopoly. But apparently it does. I’ve learned to stop questioning certain things.)

But if there’s three companies, who are all in collusion with each other, why doesn’t someone start a forth network, charge less, and rake it in? I would switch in a second. And so might 64,000,000 other people.

(UPDATE: It happened! And sure enough, all the other companies lowered their rates to affordable levels.)

I try to be a good citizen of the planet.

I carefully walk across my apartment to dump lettuce washing water over to my little pot of dried up herbs, withered and near death, in the pot on my roof. I’m still using the same sheet of foil that I that I ripped off the roll during my first week in Paris, which I’ve used continuously for reheating leftovers ever since.

And just last week, I went through all my twist-ties and separated them by age, color, length, and usability. The ones that didn’t make it, I stripped off the paper, recycled it in the paper bin, then took the wire filaments, which I put into the separate bin for metal objects. It took me about three hours, but I can sleep better knowing how many twist-ties I’ve saved.

In spite of the fact j’embrasse des arbes (hug trees, which doesn’t especially translate, but I thought I’d give it a shot…), I do amass a certain amount of plastic bags. It’s inevitable. I have cloth shopping bags I take shopping with me, but sometimes I just stop in somewhere and need a bag, and there you have it.

After realizing I had an overabundance of les sacs plastiques, I decided a few months ago that I should make a serious, concerted effort to reuse them as much as possible. A problem that’s become especially acute since I got a notice to stop putting plastic bags in the recycling bins in my building because the city doesn’t recycle them.

So I bring mine to the market, to re-use.

Unfortunately, when I hand over my slightly-crinkled, but thoroughly food-worthy plastic bag, often the merchant waves it away and rips a fresh bag from their shiny stack. And begins using that one.

When I protest, I’ve been told; “Non, non, monsieur!…à cause de bactérie!” or “C’est pour l’hygiène!”, as they begin to fill a brand-new, sterilized, sparkling clean bag with onions for me. I never realized that my used bags were teeming with hazardous bacteria and I must be protected from all the dangerous pathogens lurking in them.

Oddly, there’s no mention of any germs on the fingers that he uses to select my apricots, the same finger that I’ve seen plucking a cigarette out of his mouth or jammed up his nose.

On the plus side, larger supermarkets have started charging a couple of cents for plastic bags, and the city of Paris has mandated that all plastic bags be biodegradable as of 2010.

In the meantime, maybe I should learn how to transform them into something useful, instead of tossing my hazardous waste into the trash. I’m going to try to come up with some ideas.

In fact, I think I’ll start a dossier for each of them.