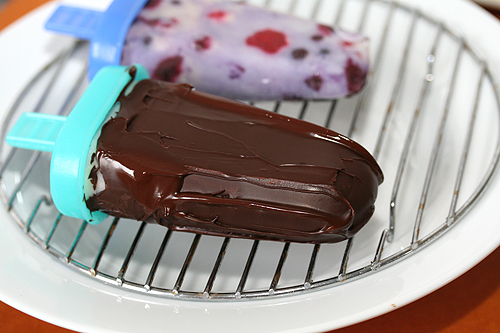 Of course, I picked the hottest day of the summer to make popsicles. After the success of my Vietnamese coffee popsicles, I thought it’d be fun to try something dipped in chocolate.

In retrospect, am I insane? 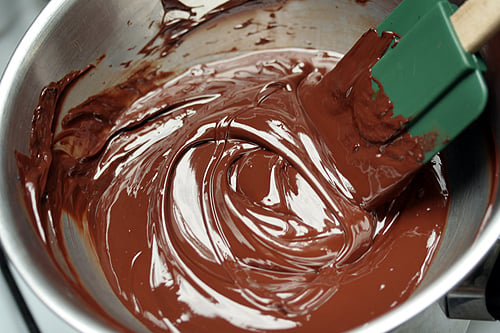 Our summer in Paris has been uneven; some cool days, and a few nice warm ones. Unfortunately the day I decided to make chocolate-dipped popsicles was the one day the temperature in my apartment shot up to 98F degrees (37C). But I’ll stop talking about the weather since there’s only one thing more boring that people talking about the weather, and that’s having to listen to someone recount their dreams for 15 minutes while you sit there and pretend to be interested.

I could never be a therapist—obviously.

So I’ll just talk about my problems and you can listen. Like what was I doing trying to enrobe frozen treats that started dripping and melting within seconds of coming out of the freezer? I had my chocolate melted, nice and smooth, and was going to pour it over the popsicles, but they started to puddle the moment they hit the metal rack. 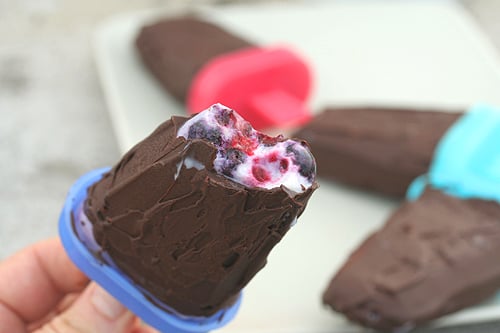 I’ll spare you the pictures of the two melted popsicles that didn’t make it, since it looked like a giant bird had flown over, once who’d eaten a whole lotta berries that day. And it wasn’t especially appetizing. In the end, I ended up scrambling to smear chocolate on the remaining ones with a metal spatula and got them back in the freezer, tout de suite.

While I’m a big fan of fresh fruits and berries, even though it’s the middle of berry season, the price of berries is through-the-roof here in Paris. Even though I’m not a therapist, I can tell you the prices are indeed truly insane. And since none that I’ve seen is locally-grown anyways, I don’t feel bad about stiffing agribusiness, and I went with the frozen ones, knowing I was going to re-freeze them anyways. 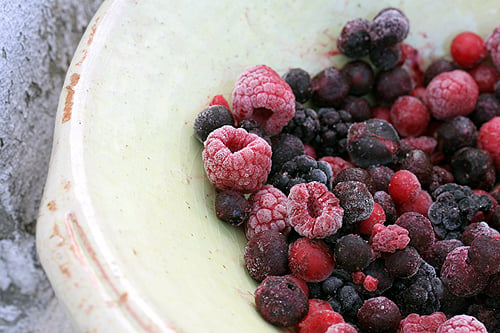 I bought a bag of cocktail de fruits rouges, a mix of black currants, raspberries, red currants, wild blackberries, and blueberries (although they were pretty scant on the blueberries, which kinda sucked, since I like them so much.) You can certainly use fresh, but if you do use frozen berries, make sure to get unsweetened ones that are individually quick-frozen and not the ones sold in a solid block of sugary syrup. 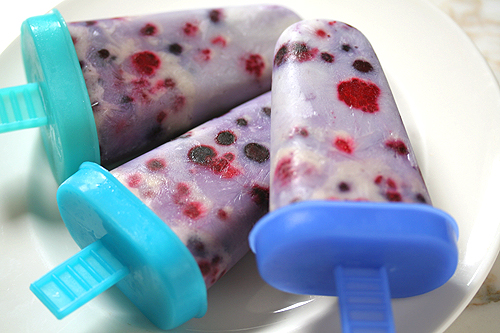 Because I wanted to keep my summertime treats on the lighter side, I used whole milk and white chocolate, so these are more like ice-pops. For those wanting something richer, feel free to use half-and-half or cream. But I’m a fan of white chocolate, which is one of those ingredients that multi-tasks: since it contains sugar and cocoa butter, you’re getting two ingredients for the price of one. Although some people find it too sweet, mixed with tart berries, I can’t think of anything better.

Actually, I can—dipping the whole thing in dark chocolate.

I was once doing a demonstration and I said, “I don’t like sweet things”, which gave everyone a chuckle. I was a bit perplexed, until they said, “But you’re a baker!” True, but I don’t like desserts and things that are over-sweetened, so you’ll notice the only sugar in these popsicles is what’s in the chocolate. If you want to add a small amount of sugar (1 to 3 tablespoons), you certainly can. For dipping, ideally, you should set the popsicles on a wire rack, over a plate, and pour the chocolate over them. But I was working under less than ideal conditions trying to get them coated and back in the freezer, so I just used a spatula, hence the sexy, handcrafted ridges.

Any chocolate that’s left over or has dripped off can be saved and reused in another chocolate recipe. Note: Popsicles molds vary in size, so you may find this makes more or less than your molds will hold.

Oddly, the photos of the popsicles that I took a bite of of were taken on my roof, hence the color difference. It’s actually cooler outside my apartment than inside!

And there’s a fun interview I did over at Cookthink that you might find amusing, and kinda goofy.