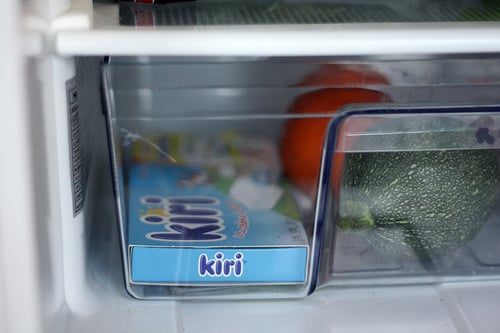 A while back, someone sent me a message asking about the availability of a certain French cheese that a French friend, who now lives in the United States, was constantly raving about. It took me a moment to figure out how I knew the name, until I realized that they were talking about fromage à tartiner, otherwise known as cream cheese.

Cream cheese is very popular in France and many pâtisseries even have a version of le Cheesecake in their showcases. It’s never as rich or dense as the American version because there isn’t the overload of cream cheese in it (I don’t have my recipe handy, but I think it calls for four blocks of cream cheese), but some aren’t bad. Many of the versions in France are made with a high proportion of fromage blanc, a fresh cheese with a gentle tang, vaguely similar to yogurt or sour cream, but not-so-rich and missing the aggressiveness of yogurt 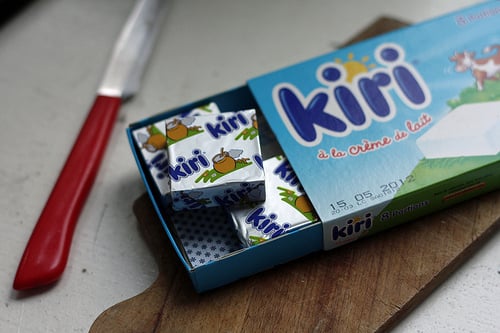 The French have taken so much to cream cheese that last year, the company that makes Philadelphia cream cheese finally wised up and dropped their prices dramatically, making it the same price as the other brands. But none can replicate the appeal of Kiri.

Kiri comes in small squares, each individually wrapped. Originally designed as “cheese for kids”, of course, those kids grow up and I know plenty of French adults who love nothing more than sneaking a square of Kiri they have stashed away in their frigo, eating it just as is, not even spreading it on bread. Of course, enterprising Americans – like a friend of mine’s mom who has lived here for nearly forty years – has been using it for her New York-style cheesecake, which I was recently told by “someone” that it was better than mine. See? Even four substantial blocks of cream cheese are no match for the subtleties of the refined French palate. Or the brutal directness. 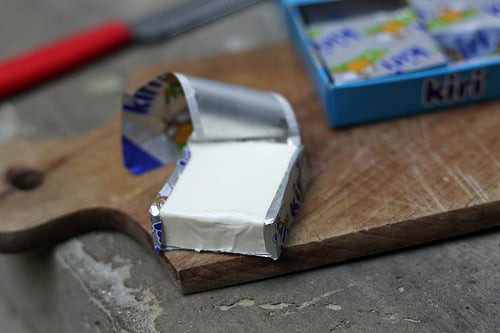 (And it’s funny when American folks are surprised that French people eat cream cheese when there are so many great French cheeses to choose from. Until I remind them that lots of supermarket shoppers in the US choose individually wrapped ‘American cheese’ slices, when there is usually decent cheddar cheese within reach on the same supermarket shelf.)

I’ll have to admit that I don’t crave cream cheese like I used it, back in the day. For one thing, to me, if I have a brick of cream cheese in the refrigerator, it demands a bagel…and smoked salmon, capers, and red onions. And for another, if I make a New York-style cheesecake, my French friends find it so rich, they can barely make it through a slice. Which means the leftovers are all mine, which is a good…and not-so-good, thing. Especially when I almost busted the button in the changing room, trying to squeeze into some ‘slim fit’ trousers for my recent trip to Monaco. 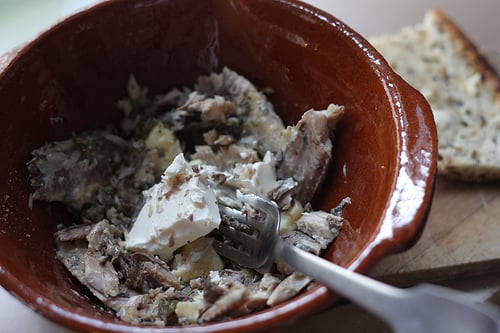 Speaking of things that are spreading, although Kiri is meant to be spread (in French, à tartiner), I have friends who told me that their moms used to hand them a square to unwrap and eat just as-is. But I was making a batch of sardine rillettes the other day and found a box of Kiri in the refrigerator drawer that was bought by “someone” else. I unwrapped a square and mashed it in with a few hunks of soft butter, for additional richness. I don’t think I’m ready to unwrap a few pounds worth for my next cheesecake, but perhaps I’ll take a cue from my French friends and skip the other ingredients, and the crust, (and perhaps the sardines), and just take the direct route as well — à la française.