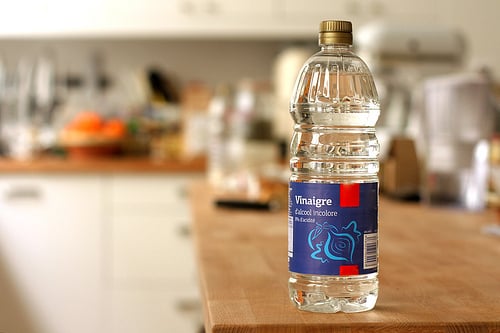 The most common bottle of crisp white that you’ll find in any Parisian apartment isn’t a musky Muscadet from the Loire, or a Petit Chablis from Burgundy. This one comes in a plastic bottle, has a screw top with a little opening just underneath so you can squeeze out a stream as needed, and costs less than a buck. It’s le vinaigre blanc, and it’s obligatoire to keep a squeezable plastic liter bottle handy in your kitchen.

(Not to say the other kinds of whites aren’t obligatory as well. Each just help hurdle different kinds of obstacles.)

Before I moved to France, I rarely paid white vinegar a second thought. My pantry was stocked with red wine and sherry vinegar, and a little bottle of fancy balsamic. But their importance is secondary to white vinegar, which does everything from keeping your wine glasses spotless to making sure your dishwasher doesn’t seize up on you mid-load, completely clogged by the infamous calcaire, never to wash another dish again.

I arrived completely unaware of it, and in my first apartment, apparently neither did the person before me because right after I moved in, one day, my dishwasher simply ground to a permanent halt. However I was fortunate regarding the laundry machine because a friend confided in me over lunch in a café shortly after I arrived, as if it was some big unspoken secret in Paris that you can’t just wash clothes or dishes without adding a little something “extra” to the load. (And now you can stop wondering what all those French people are talking about in Parisian cafés, if you don’t speak French.)

She advised Calgon, but a well-meaning friend from California came to visit and reprimanded me for having a box, saying it was an environmental catastrophe. Apparently the word hasn’t made it six thousand miles away because I see it in almost every household I visit, tucked under the kitchen or bathroom sink. But it was then that I made the switch to 100% white vinegar.

Now I add a squirt whenever I do a load of dishes or clothes, until my other half presented me with a dire picture of what would happen if I didn’t run a full cycle in each machine with a whole bottle of white vinegar and no dishes or clothes in it. I can’t quite bring myself to do it, thinking of the waste of running an empty machine, but I suppose that’s better than the alternative of scrapping the machine in its entirety for a new one.

The other day, I found out that someone had lost it outside of my front door. But I didn’t feel singled out though, because whoever it was practiced égalité and also graced my neighbor’s entrance as well. It’s not exactly the first thing you want to see in the morning (or in the evening…or the afternoon, either) but that’s life in the big city. And I’m thinking that in addition to installing dispensers with bags to pick up doggie droppings, I guess a few sickness bags might be a good idea as well. (And ashtrays, accompanied with an enforced fine for not using them.)

It was then that I learned that white vinegar isn’t just for keeping your appliances from the scrap heap but it’ll remove some of the toughest – and most unpleasant – stains and odors known to humankind. (Although I use the word “kind” somewhat loosely.) Honestly, who knew what an important role – aside from salad dressing – that vinegar would play in my life. It’s a great cleaner and I’ve since used it fill my larder with pickles, and for making homemade lait ribot (buttermilk), adding a touch to regular milk and letting it sit.

So I stock up weekly and pick up a new bottle as often as I can, because I’m going through it faster than the stuff I’m uncorking. And not just because some folks are feeling a little quesy late at night, but because it makes me feel like a local to have a couple of bottles under my sink, and I’m finding myself squeezing for a reason morning, noon, and night. But let’s just hope in the future, most of it is confined to afternoons and evenings.