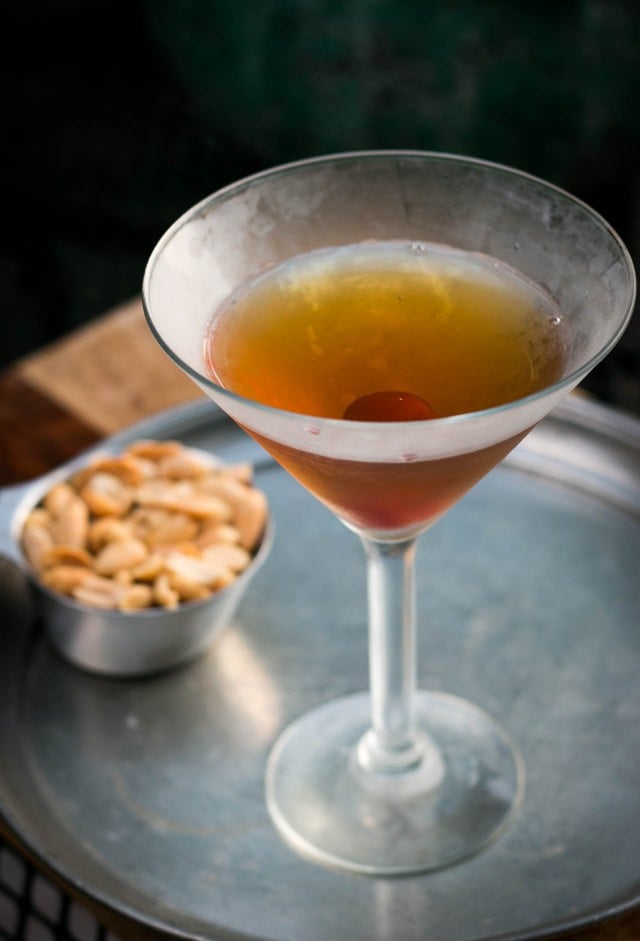 There comes a time in everyone’s life when one needs a Manhattan. During the past few weeks, that time had come for me. Actually, it came for me several times. I’ve recently been turned on to rye whiskey, and although folks online spoke up about various brands they like when I mentioned my sudden craving on social media, I learned that it’s not something that one comes across every day in Paris.

I went to three wine and liquor stores in my neighborhood and none of them had any on their liquor shelves, and none of the salespeople had ever heard of it. One offered me Scotch whisky, which was kind of amusing; it’d like offering someone prosecco who is looking for champagne. They both have their place, but they’re not the same thing. 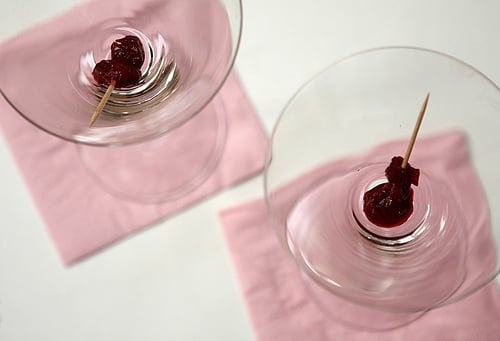 I happened to find myself near the Place de l’Odeon and went into La Maison du Whisky, where I knew I’d find a knowledgable ear. I love learning about new things and Paris is great because there are so many specialty stores manned by people who work there that are really dedicated to what they offer. 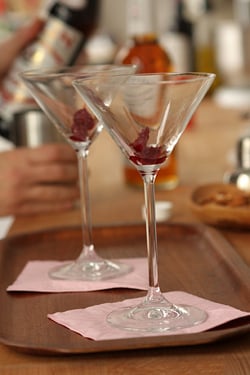 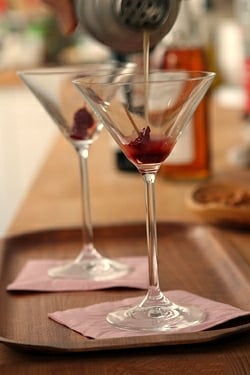 So I told that masterful fellow at the shop that I wanted to make Manhattans, and needed rye and vermouth, but worried about cocktail people online getting on my case for making the wrong choices or picking up the wrong brands. Which made him look at me funny – making me realize that he doesn’t have a blog.

I said, “I’m not really a cocktail snob because I don’t know all that much about this stuff”, to which he replied, “Well, I am a cocktail snob, and let me tell you, you’re doing just fine.” 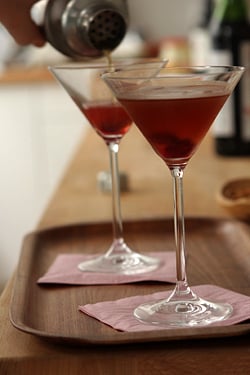 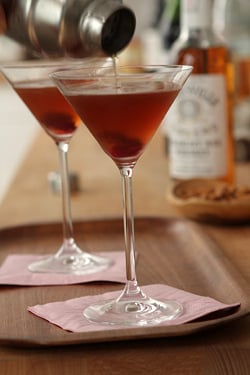 Brimming with confidence, I left feeling completely at ease with my two new bottles because after all, enjoying a cocktail is the most important part, not overanalyzing the nomenclature. Although one liquor company is certainly determined to teach French people what whiskey is, and isn’t – in English* 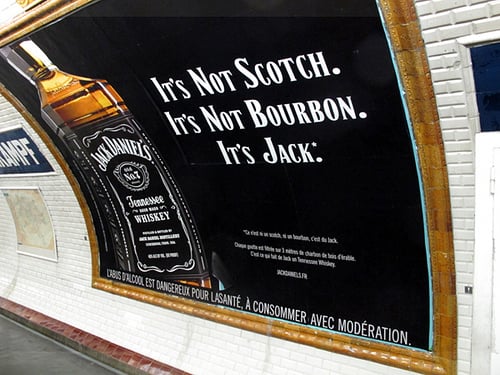 But let me tell you, there’s nothing that will make you more at ease than a couple of Manhattans.

(I know there are lots of sticklers for details, but I’ve gotten used to head-scratching cultural mash-ups, such as ads in the métro promoting French blue cheese, using a woman in a Chinese dress, touting a recipe for “sushi” made with raw salmon and fromage bleu.) 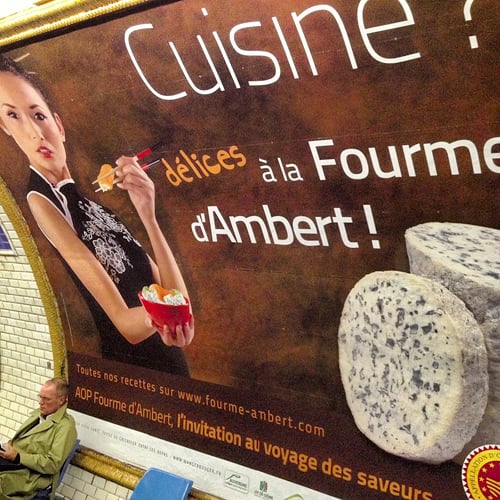 So I went home and after washing out my eyeballs, I found myself in my kitchen, armed with a bottle of Dolin vermouth, which proudly declares that it’s Made in France on the bottle (in English!). And of the three or four bottles of rye that they had in stock, I went with Pikesville. I love the mix of slightly smoky flavors with fruit notes in rye and I think I need to figure out how to bring a barrel of it back from the states on my next visit. Or let visitors do it.

So back home, I had some griottes confits (candied sour cherries, a recipe from Ready for Dessert) that I had put up last summer and used them instead of maraschino cherries, which I would need some of that gold bullion to afford here. And even though I used to eat a whole jarful of them as a kid, now I find them rather, um, sweet, and don’t mind one once in a while. But I’d rather squander my euros on rye and vermouth. 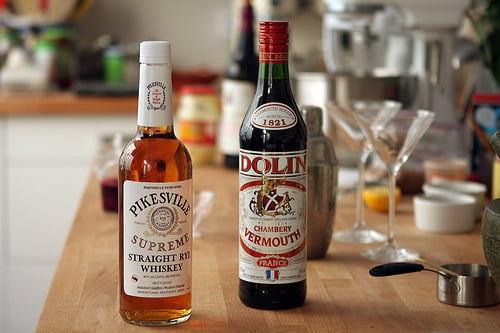 Honestly, I don’t know if there is anything a Manhattan can’t do. It took me to the sixth arrondissement for rye and vermouth, and on the métro there, I got a lesson in American whiskey as well as a chance to learn about the multicultural possibilities for le fromage bleu. However I’m going to try to stick with tradition on this cocktail, and take a pass on any nontraditional sushi. 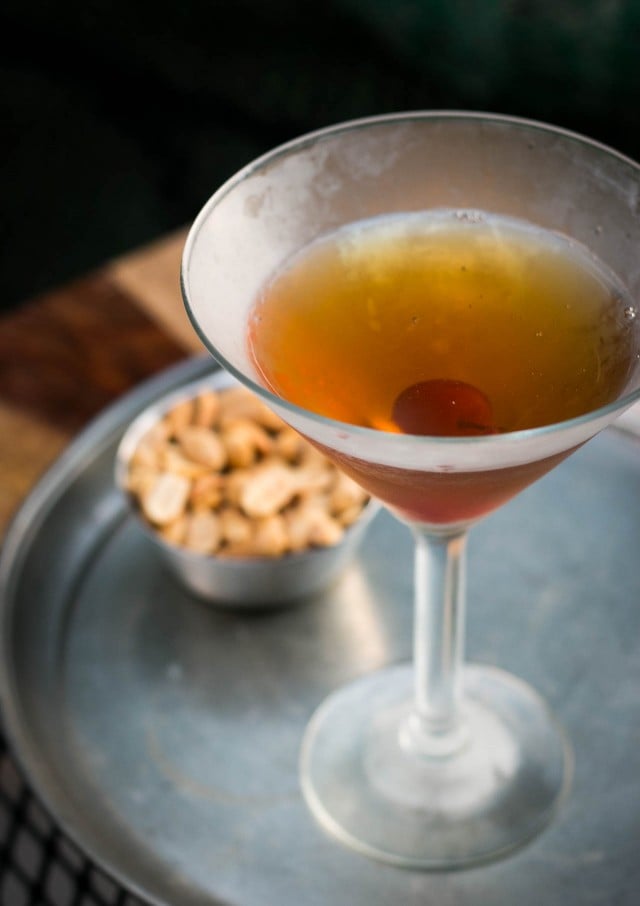 Some folks use a twist of orange zest in their Manhattans, rather than a cherry. One variation is a Perfect Manhattan, which swaps our equal parts sweet and dry vermouth for the sweet red vermouth. Using bourbon in place of the rye whiskey will yield a slightly sweeter cocktail, with less-spice, but I sometimes find one made with bourbon satisfying.

How to Make the Perfect Manhattan (Esquire) 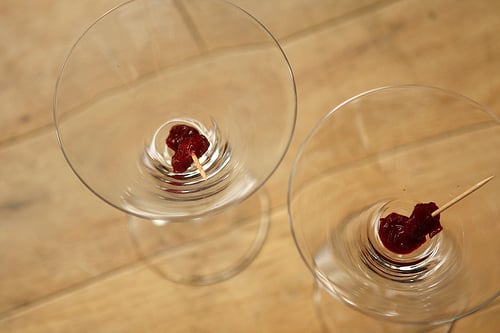 **The fine print translates it into French, like any ads in a language other than French are required to be.