One assumption that I’m going to make about the French is that they’re not afraid to make things au pif, or “by the nose”. 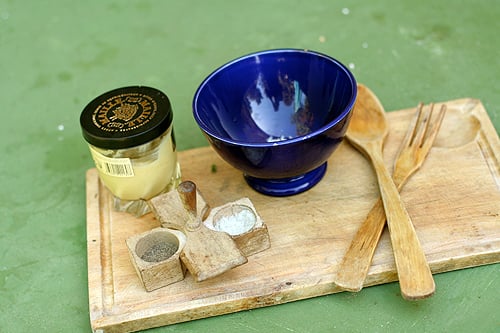 I don’t know if a precise recipe for sauce vinaigrette actually exists. But if there is, I bet few people follow it very closely. And Romain is no different from his compatriots when it comes to recipes, and rules. They are both for other people—and don’t apply to him. 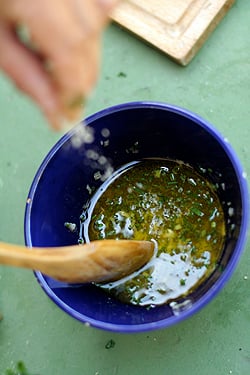 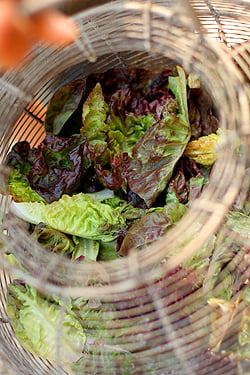 Vinaigrette is just one of those things. It’s a few simple ingredients which comes together so well, when done right. Anyone can make it: you just pour, stir, marinate, then taste until it’s just right. But the salad dressings in France always taste better to me than elsewhere. So I thought I’d follow Romain when he made a true vinaigrette. He was surprised at the idea of measuring anything, so I follow him through the steps, taking a few notes along with way (see Recipe, at the end) and along the way, I learned two French secrets for a great salad dressing. One is that you must use good Dijon mustard.

Most French people use Maille or Amora, which are easily-available and decent brands. And although the French aren’t known for embracing spicy foods, when it comes to mustard, all bets are off and no one minds using one that’s especially zippy. 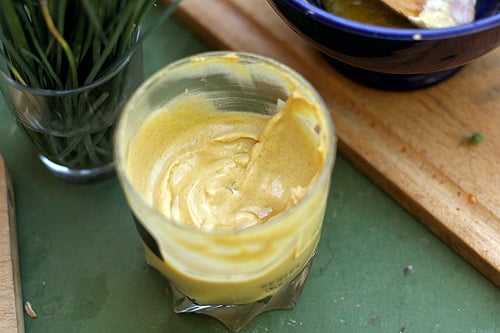 Personally, I’m a fan of Edmond Fallot mustard, which is made from French-grown spices and exactly the right balance of spices for me. My Francophile cousin always brings some back to the states to make a salmon glaze since she says the other mustards just don’t taste the same. Either way, just be sure to find a good Dijon mustard, preferably made in France, and use that.

The other secret to a great salad dressing is the use of les échalotes. Some Americans aren’t that familiar with shallots, which are the chic cousins of onions. Shallots, when marinated in vinegar, soften and add an attention-grabbing flavor to the dressing because of its slight bite. I wouldn’t dream of making a salad dressing without them. Do try mincing one and adding a bit to your next salad dressing; you’ll be amazed at the difference. 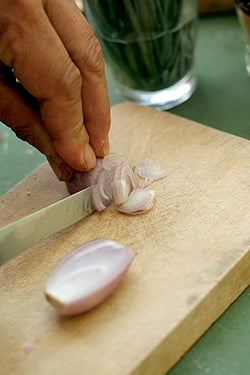 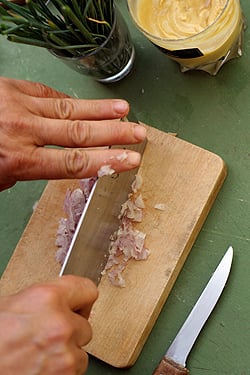 The first thing Romain does is to mince a small shallot pretty fine. The shallots in America are huge, around the size of a small onion. In France, I prefer the shallots longue, which are narrow and slender. But Romain just uses the regular shallots, so don’t listen to me. Cut it pretty fine. If your knife skills aren’t up to snuff, just run a chef’s knife over the shallot slices a few times after you’ve cut the shallot up and that should do it. 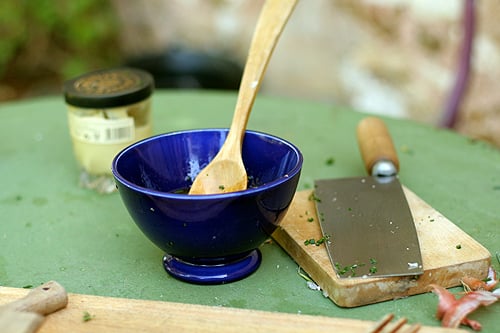 Next, mix the shallots in a bowl with the vinegar and a decent pincée (pinch) of salt. Sherry or wine vinegar is best, and I’m trying to wean everyone in the world off balsamic vinegar, which is too syrupy for a salad. (You are welcome to post on one of those foodie bulletin boards about how I don’t know what I’m talking about when it comes to vinegar in salads. But try sherry vinegar before you do. If you don’t like it, then you can post away.)

When I moved here, I bought a bottle of sherry vinegar, and when a friend came over she said, “Oooh! That’s so French!” I didn’t know how French I was until that bottle took up residence on my kitchen shelf, but it does make a difference. Romain uses white wine vinegar that his parents have in a crock in their kitchen. Did you know that vinaigre is actually a liason between two words, vin (wine) and aigre (sour). So theoretically, that sweet balsamic doesn’t cut it in the sour department. And believe me, you don’t want argue with the French about their language.

(Remember what happened last time I tried to make up a word? Yikes…)

Let the shallots sit and “pickle” for a few minutes. This can be done a few hours in advance, and that extra time means they’ll mellow even more. Adding the salt now helps to make sure that it dissolves, so do that. And this step is especially important if using coarse or flaky sea salt, as they often do in France. 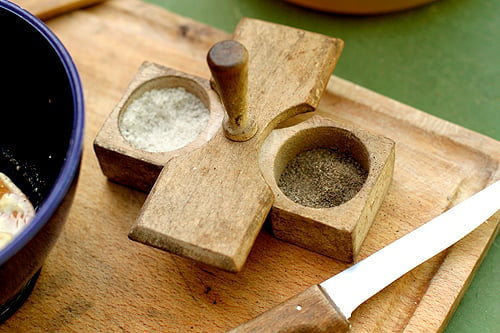 Then you want to add some Dijon mustard. As in, mustard from Dijon, France, since we’re being literal. 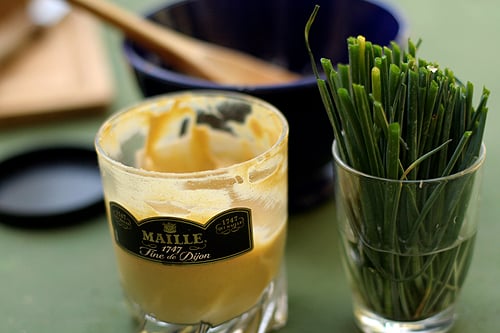 The word “Dijon” is tossed around a little too-easily these days, and they may as well write “Dijon-style” on the label to be clear. Easily available in France are aforementioned brands like Maille and Amora. When I moved here I bought a jar of Amora at the supermarket and was on the bus home, a woman looked in my bag and said, “Ooooh. That mustard is very, very good, monsieur!” Needless to say, I was as proud as a peacock that I impressed one of the locals after that. Then she elbowed me aside and got off the bus.

Here, you were thinking, “I thought we were making the salad dressing according to Romain?” Well, we are. But since I’m trying to become French, I trying to do better at offering up my opinions, as well as ignoring some of the rules. 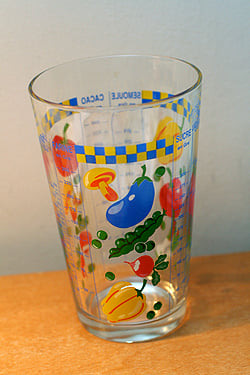 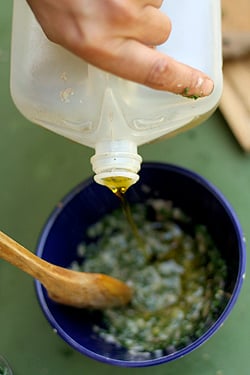 I’ll stop harping about the mustard, but if you come to France, you can usually find it at Monoprix stores, as well as La Grande Épicerie and G. Detou, in Paris. And it’s not expensive. Although the big jar of Amora mustard I bought was inexpensive and once empty, was intended to be a measuring cup. And it had goofy, wildly-colored vegetables printed all over it. 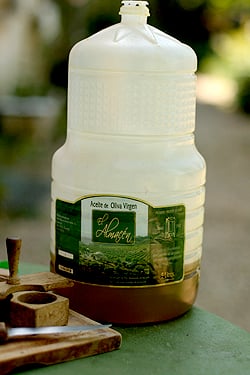 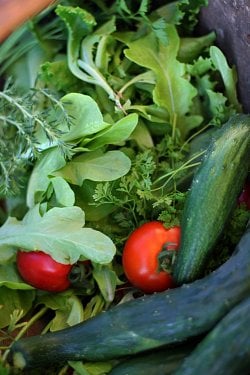 So Romain adds in the mustard, and mixes it until smooth. Alors, then it’s time to add the olive oil. Another ‘secret’ of salad dressings, in France and elsewhere, is that some sneaky people don’t use olive oil. Or they mix olive oil with a neutral-tasting oil. The first time I saw someone sneak safflower or colza oil into their dressing here, I freaked and wanted to run over and tell her to stop. I’d never made a vinaigrette with anything but olive oil, but as a Parisienne cook told me recently, “It wasn’t until about ten years ago that I ever used olive oil. It was always butter butter butter in our cooking.”

But olive oil has flooded Paris and has even become trendy. What is this world coming to? Although he’s far from trendy, Romain uses olive oil, which his sister brings back from Spain for him.

Then in goes the olive oil, mixing it with a wooden spoon. And next comes the most important step: la dégustation. 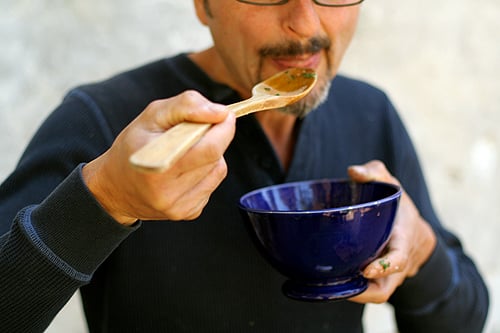 Because I’ve trained Romain in the hyper-hygienic ways of les Americains, of course, he used a different spoon after each tasting. Really he does.

One thing that we do disagree on is drying the lettuce. I use an Oxo salad spinner, which I think does the best job. But if course, Romain wouldn’t be French if he agreed with me—even when he knows I’m right, so he prefers to give his greens a spin en plein air. Still, for us apartment dwellers, I recommend a salad spinner, unless you like cleaning vegetable washing water off the ceiling. 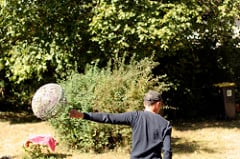 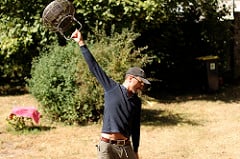 The word “foodie” doesn’t exist in French. We’ve tried thinking up a translation and all we could come up with was gastronome, which isn’t quite right. And I’ve been accused of being a foodie (which I don’t think I am), but I do admit to watching someone drain and toss lettuce for a salad and wanting to ask them if they ever considered drying the lettuce so the dressing would cling to it instead of sliding off?

So I don’t care how you dry your lettuce, whether you use one of those newfangled salad spinners, or go traditionelle and use some gras de coude. Get that water off it. 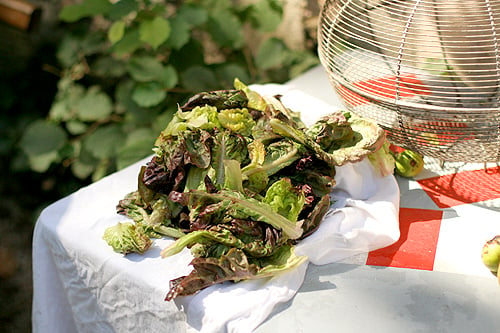 Once dry, are you ready to go? Pas du tout! At this point, you can add some chopped fines herbes. Chives, chervil, and flat-leaf parsley are all good. To take it in a different direction, you can use tarragon, but with restraint as it’s quite strong. 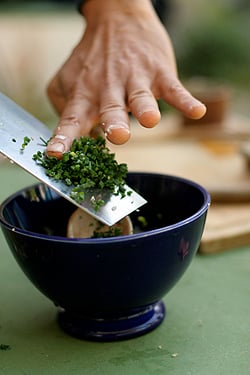 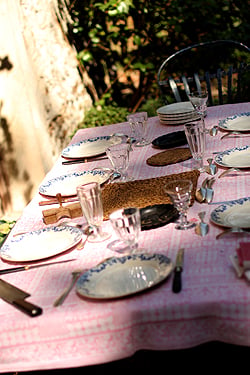 When it’s all done, mix the vinaigrette into the salad so the leaves are well-coated. And then, à table everyone. 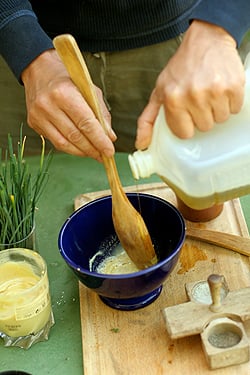 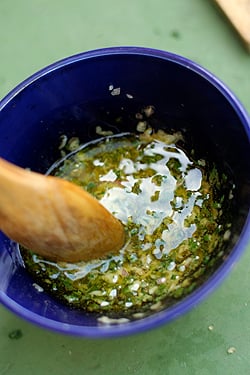 Aside from not using balsamic vinegar in salad dressings, another astuce is to use freshly-ground black pepper, which is best added when tossing the salad with the dressing.

If you wish to add fresh herbs, it’s best to chop and mix them in shortly before serving so they retain their flavor. Storage: This dressing will keep for about eight hours at room temperature. If you want to make it farther in advance, it’s best to add the shallots closer to serving so they don’t lose their verve.
Pin3K
Share316
Tweet
3K Shares