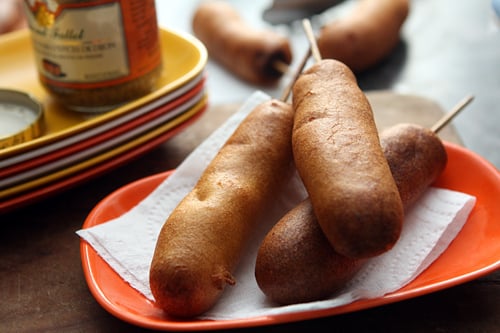 When I moved to Paris, one of the kind people who took me under their wing (as in, the kind that takes you out to Ikea), said to me – “You’re not a real Parisian until you’ve had a merguez sandwich stuffed with frites inside, at 3am.”

Well, it’s been nearly a decade and I’ve yet to have that merguez sandwich at three am. In fact, as the time marches on, the idea of staying up past midnight becomes an even more remote possibility with each passing year. Yet I do love merguez sausage, spicy wieners from North Africa, made of lamb, and enlivened with plenty of spices and a good dose of fiery harissa (hot chile paste). So when my equally piquante pal Matt came out with a book called On a Stick!, leafing through it, I landed on the all-American corn dogs, and decided to give them a Franco-African twist. Or dip. 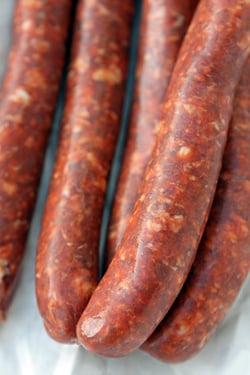 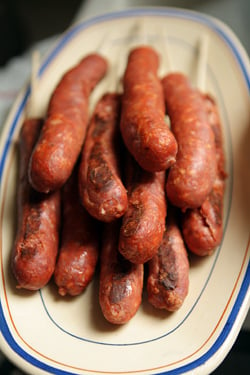 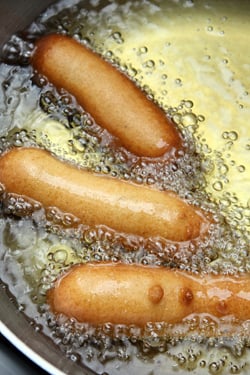 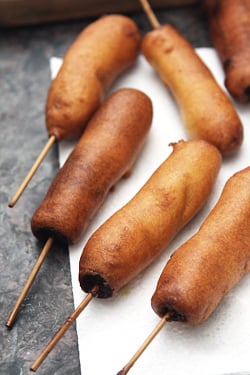 I’m not all that fond of deep-frying at home, since the professionals do it better, but I doubt I’d have much success finding a merguez corn dog on Paris. And you know – when you want a corn dog, you’ve just gotta have it. So along with cassoulet burritos, deep-fried panisses with chile-cumin salt, and bouillabaisse couscous bowls, I’m going to add merguez corn dogs to the list of things that if the food truck craze ever comes to Paris, someone needs to get on the stick with. 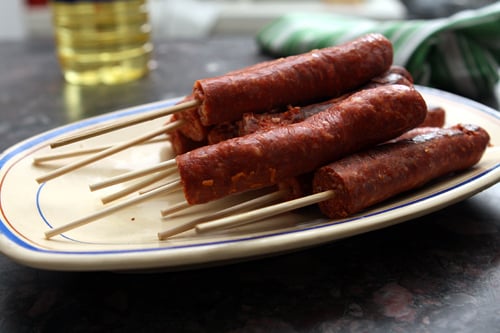 Fortunately we can get merguez sausages at most markets, sold at the charcuterie stalls alongside chipolatas (herb sausages) which are terrific grilled and served on a plate along with fresh oysters. (Which gives me another ‘food truck’ idea to add to that list…) 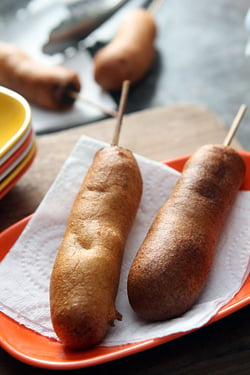 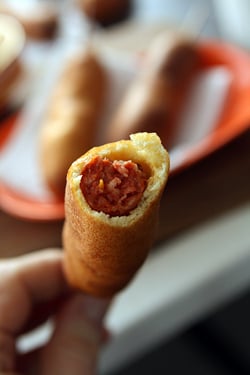 I still haven’t had that merguez sandwich with frites, but I can say I’ve had a merguez corn dog. And now it’s the rest of Paris that has some catching up to do.

From On A Stick! by Matt Armendariz I tried these with chickpea flour in place of the cornmeal, thinking that would add an extra touch of l’exotique, which it did. If you use it, you’ll need to add an extra tablespoon of milk to the batter, to thin it to the right consistency for dipping. You try them with any sausages that are available. Or just go with regular hot dogs. I cooked the merguez on a baking sheet prior to dipping and deep-frying, but they can be pan-fried as well, draining them well before using.
Servings 12 or 4 traditional corn dogs

On a Stick! (Matt Bites) 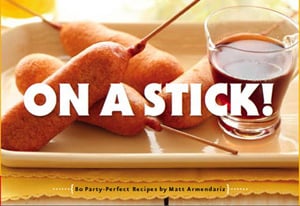