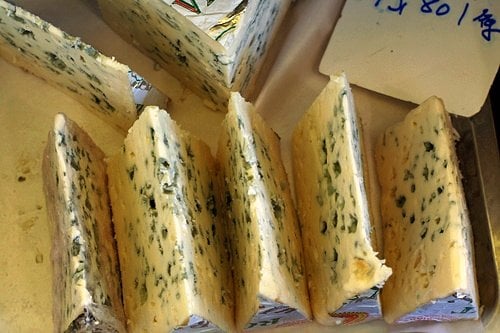 Roquefort cheese is produced in the southwestern region of France and is designated as AOC, the first product ever to do so in 1925, and is a designation meant to denote quality and provenance from a certain region made in a certain manner. Cheese experts (and me) agree that Roquefort is one of the top, all-time-greatest cheeses in the world. And I was excited to explore using it in this delicious ice cream.

Roquefort is a raw-milk cheese, aged between 3 to 9 months in caves. It gets its unique flavor and mold as a result of some very old rye bread; jumbo-sized loaves are baked, then left to sit for two months, during which time they become encrusted with mold. The mold is scraped, then introduced into the caves, where the cheese becomes encrusted by the greenish powder, then inoculated with the spores (called penicillium roqueforti) by resting the wheels of cheese on spikes. That’s why often you see ‘lines’ of mold in Roquefort, as in many other bleu cheeses. But unlike other bleu cheeses, Roquefort has a very special, sweet and tangy flavor that lingers and excites.

Roquefort goes very well with winter foods, such as pears, dates, oranges, toasted nuts like walnuts and pecans, sweet Sauternes, or with bitter seasonal greens like frisée, radicchio, or escarole. A simple winter salad can be made with chunks of Roquefort, slices of ripe Comice pears, leaves of Belgian endive, and a drizzle of good walnut oil. But sometimes Roquefort’s best enjoyed just smeared on a piece of hearty levain bread…and that’s lunch. 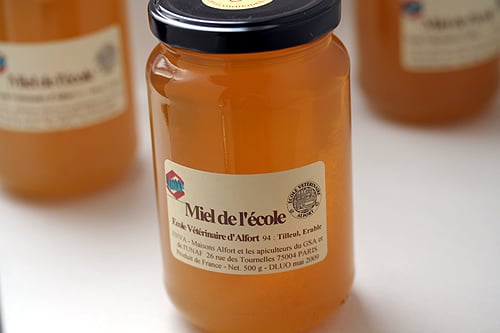 When you buy Roquefort, it should be moist and creamy without any red mold and the cut surface should glisten with milky freshness. It usually comes with a piece of foil around its exterior, and whether or not to eat the rind underneath is entirely up to you (don’t eat the foil…especially if you have lots of dental fillings.) If the rind looks dark and funky, skip it. It’s probably going to be too pungent and dank-tasting. But most of the time it’s fine to eat and as delicious as the rest of the wedge.

In France, there’s a few brands of Roquefort to choose from. But I don’t think I’ve ever had a Roquefort that was not wonderful, so it’s hard to go wrong when buying from a reputable cheese vendor. You can also use a nice bleu or gorgonzola cheese in its place.

Here’s a recipe of mine that will surprise you: Roquefort and Honey Ice Cream.

Try roasting some pear slices in the oven with some strong-flavored honey and spices and maybe a strip of lemon peel. Serve warm, with a scoop of this ice cream melting alongside. I also like this with a spoonful of dark honey on top, with a sweet dessert wine, like Barzac or Sauternes, to accompany it.

Adapted from The Perfect Scoop (Ten Speed Press)
6 tablespoons (120g) honey
4 ounces (110g) Roquefort
1 cup (250ml) heavy cream
1 cup (250ml) whole milk
4 large egg yolks
a few turns freshly-ground black pepper
1. In a small saucepan warm the honey, then set aside.
2. Crumble the Roquefort into a large bowl. Set a mesh strainer over the top.
3. In a medium saucepan, warm the milk.
4. In a separate bowl, whisk together the egg yolks. Slowly pour the warm milk into the egg yolks, whisking constantly.
5. Scrape the warmed egg yolks back into the saucepan.
6. Over medium heat, stir the mixture constantly with a wooden spoon or heatproof spatula, scraping the bottom as you stir, until the mixture thickens and coats the spoon.
7. Pour the custard through the strainer and stir it into the cheese. Stir until most of the cheese is melted (some small bits are fine, and rather nice in the finished ice cream.) Stir in the cream and the honey, and add a few turns of black pepper.
8. Chill custard thoroughly, then freeze in your ice cream maker according to the manufacturer’s instructions.

The Perfect Scoop: Now in Softcover!