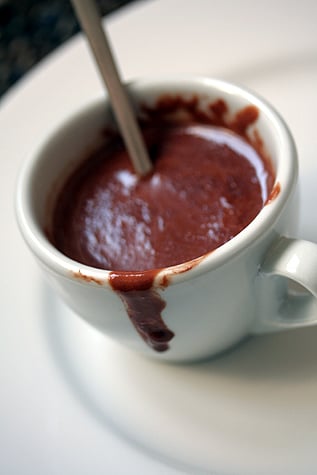 I’ve been a little lax in my duties around here reporting on chocolate. In my defense, I’ve been sidetracked by bacon, seaweed, and kimchi. But man cannot live by chocolate alone, even in Paris.

Speaking of chocolate, when I was doing research for my chocolate book, it was challenging to find people to talk about what they do. I met with one representative from a big chocolate company who said he would only talk to me, and let me visit, if I only wrote about their company in the book.

When I was writing my ice cream book, I called a gelato chain here in Paris, asking if I could come in and see how they make their ice cream to include them in the book. After much hemming and hawing, I never heard back. It’s always after the book comes out, you become a popular fellow. I seem to be always behind the curve on these things.

Lucky for me, some of the new chocolatiers are sending me bars to taste. (And the dude from the place mentioned above got the boot…) After sampling a few, I must continue to say how impressed I am with the care that these pioneers in the states are taking when crafting these small-batch chocolates. 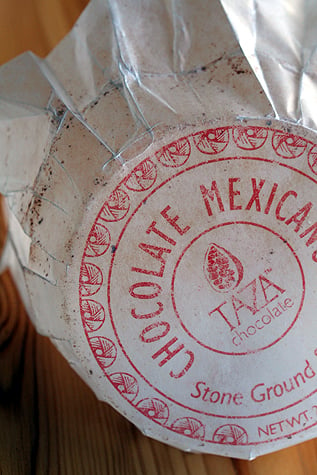 Taza Chocolate sent me a bar and included a round of their Mexican-style chocolate, whose instructions said to “grate three wedges…into two cups steaming milk or water.” A bit suspect of those meager proportions, I cut the liquid in half to one cup, and kept grating and melting until it tasted right to me. I ending up using the whole disk. (About 3 oz.) I let the chocolate mixture simmer a bit and got sidetracked reading e-mails (so it was all your fault), and smelled something delicious a-brewing.

“Gee, whatever is it that they’re cooking downstairs, it sure smells good.” And I kept scrolling and reading.

A few minutes later, I’m thinking, “Hmm, whatever it is they’re making down there, I think they’re about to burn it.”

Moments later, they probably wondered what that mad scramble was coming from above, which was me bolting towards the stove: I just barely rescued the pot and the chocolat chaud méxicain from becoming an addition to the grande poubelle de Paris.

The good news is that the hot chocolate was luxuriously thick and rich—and delicious. I don’t know how long it was simmering (…5…10 minutes?…), but it was really much better than had I not cooked it close to the edge of darkness. There was a barely-perceptible hint of cinnamon, which if the tag didn’t tell me was in there, I wouldn’t have known. And it was far, far better than those sweet, colorfully packaged, disks of Ibarra chocolate, whose box is far more interesting than the sugar-laden tablets of chocolate inside. 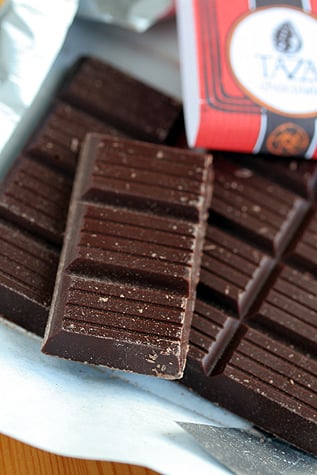 Later I tore open the 70% chocolate bar I’ve been eying on my chocolate shelf here for the past few weeks, which was decidedly on the fruity side rather than ‘roasty’, like so many other chocolates. This is because Taza light-roasts their organic beans, so rather than having a dominant roasted flavor (like over-roasted coffee, which disguises lousy beans), the fruitiness of the cacao really shines through.

It also wasn’t as dry as some of the other high-percentage chocolates; too much cacao can make a bar too acidic and harsh. This had none of those bad qualities and instead, I tasted lots of ripe, lush fruit, mainly raisin, cassis, and dark cherry flavors with a pleasant little crunch of sugar, perhaps because of the organic sugar cane used, which is more stubborn to dissolve than it’s white, refined counterpart. A French friend who tasted it didn’t believe me when I told them there was no fruit added; he was really surprised that the tablet was pure chocolate.

I was surprised I let it sit so long around here without giving it a taste. And now I want more.

A Video Tour of Taza Chocolate from the Boston Globe

Chocolatiers and Chocolate Makers: My thoughts about who’s making fine chocolate here and there

A recipe for the easiest chocolate ice cream ever!