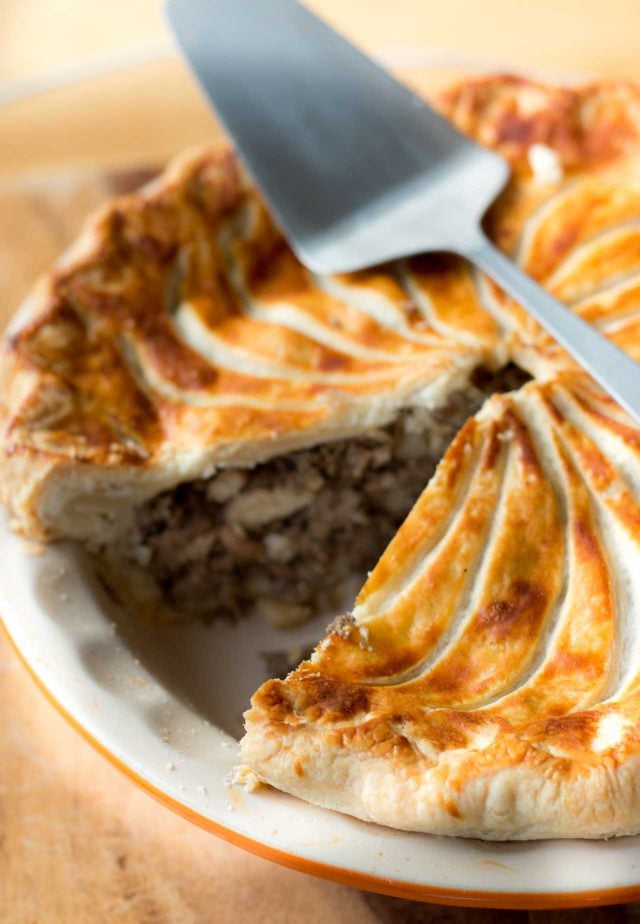 I’m not going to beat around the bush here: The new Joy of Cooking is huge. When I first heard about it, I wondered, “Do we need a new Joy of Cooking?” First published in 1931, the book went through several revisions over the years, to become what has the most enduring of all American cookbooks. Yet I wondered if the book would (or could) still be relevant, in the age of the internet, and as several other books had come along through the year, that could also be considered “encyclopedias” of cooking. I had some doubts.

The latest Joy of Cooking is a formidable volume. With 4000 classic recipes, revised and retested, and 600 new ones added, the new edition clocks in at nearly 1200 pages. Some previous editions attempted to tinker with the formula, dispensing with recipes and information that the editors didn’t think relevant, such as the much-missed preserving chapter and information on cooking game.

The information on canning is back as is the chapter on cooking game; the famous, or infamous, squirrel recipe, and diagram have been replaced by rabbit recipes, including Lapin à la moutarde, as the authors felt they were more applicable to how people eat today. (Muskrat and bear recipes remain in there.) Other additions to the new book include ingredients that have become more available in supermarkets, like salsa, fresh lemongrass, and dried chiles, as well as an extensive inclusion of recipes culled from the diverse cultures that make up America (and the rest of the world) such as couscous, miso-glazed eggplant, pho, fritto misto, queso fundido, za’atar, and kimchi. 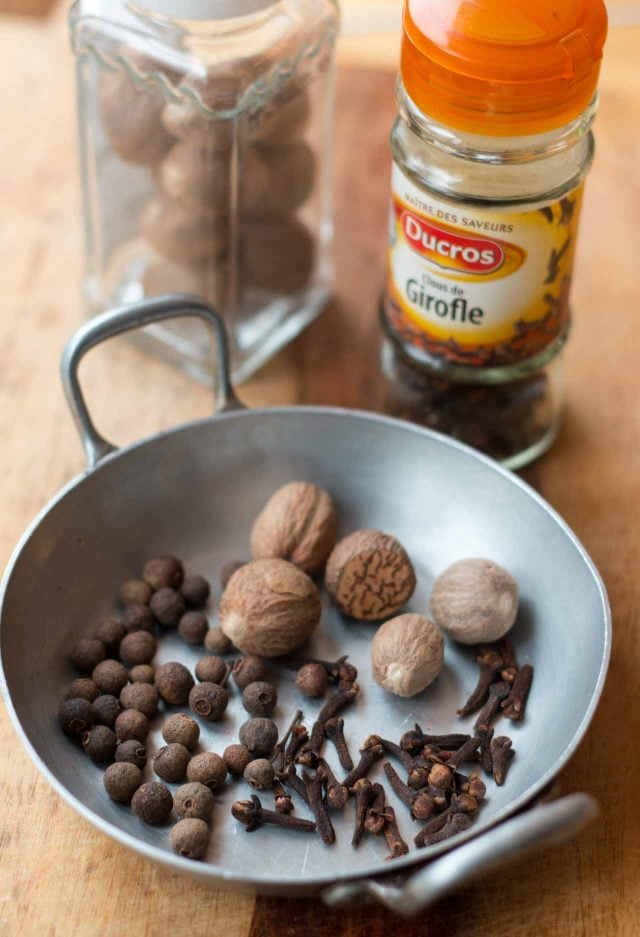 Coincidentally, I happened to be reading Stand Facing the Stove at the same time the new Joy of Cooking came out. That book is a meticulous history of what started as one woman’s passion, and a way to cope with the grief of losing her husband after he lost his battle with depression, and his suicide, to become one of the most important cooking references in the world. (In case you don’t believe me, I spotted a copy of an older edition in a French friend’s apartment recently.)

Remarkably well-researched, Stand Facing the Stove traces the Rombauer and Becker family lineage; the first 84 pages are very detailed on that subject, which I’ll admit was a lot of information to digest (although I’ll also admit to having the world’s shortest attention span…) and continues to how Irma Rombauer convinced a publisher to publish her book, which introduced the inclusion of the author’s voice in the text, something new in cookbooks, as well as a radically different way of writing recipes: placing the ingredients in the steps of the technique, rather than as a list at the beginning of the recipe. 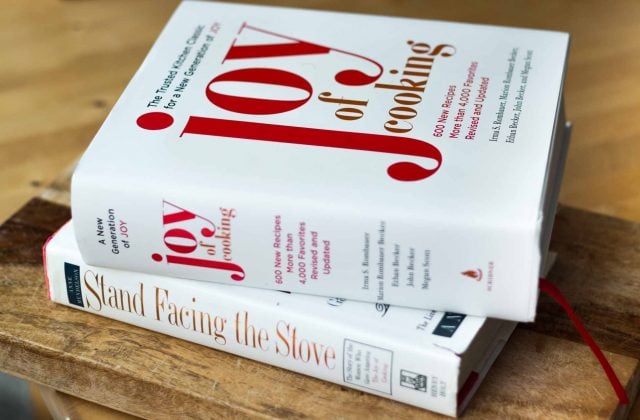 Stand Facing the Stove also chronicles one of the great catastrophes in the history of publishing, which caused immense grief, anguish, and substantial financial loss to Mrs. Rombauer, who made the mistake of signing away the copyright of the Joy of Cooking to her publisher, Bobbs-Merrill. (You can read an excellent article by Stand Facing the Stove author Anne Mendelson here, about the challenges she faced researching and writing the book.) In subsequent years, the publisher did everything they could to thwart and vex Irma, and keep her royalty payments low. Her daughter, Marion Rombauer Becker, who was quite different than her mother, eventually collaborated with Irma on the book, before taking over the reins completely when her mother passed away. She evolved the book to include tips on nutrition, gardening, and making environmentally conscious choices when shopping and cooking, which was another way that put Joy of Cooking ahead of its time, back then. 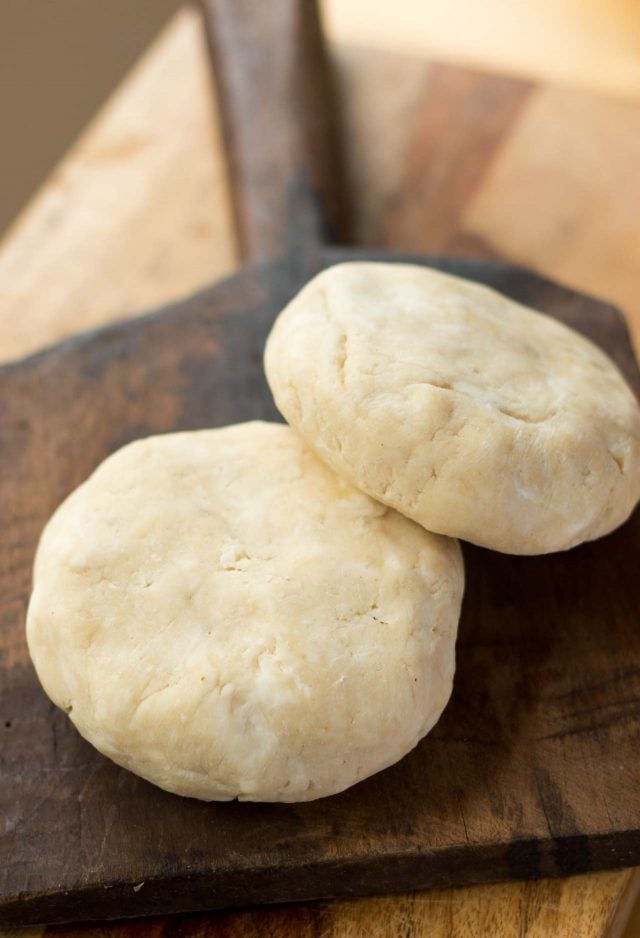 Of course, Irma could not have imagined that one day, the Joy of Cooking would be available on CD-Rom (which enabled me to bring the hefty book to Paris two decades ago), an app, an Instagram account, and more than 20 million copies in print. But her great-grandson John Becker and his wife Megan Scott spent nine years revising the book for how we cook today. Spending the last few months leafing through the book, absorbing all the information, I have to say, I love the new edition and it truly deserves a place on everyone’s cookbook shelf, including mine. 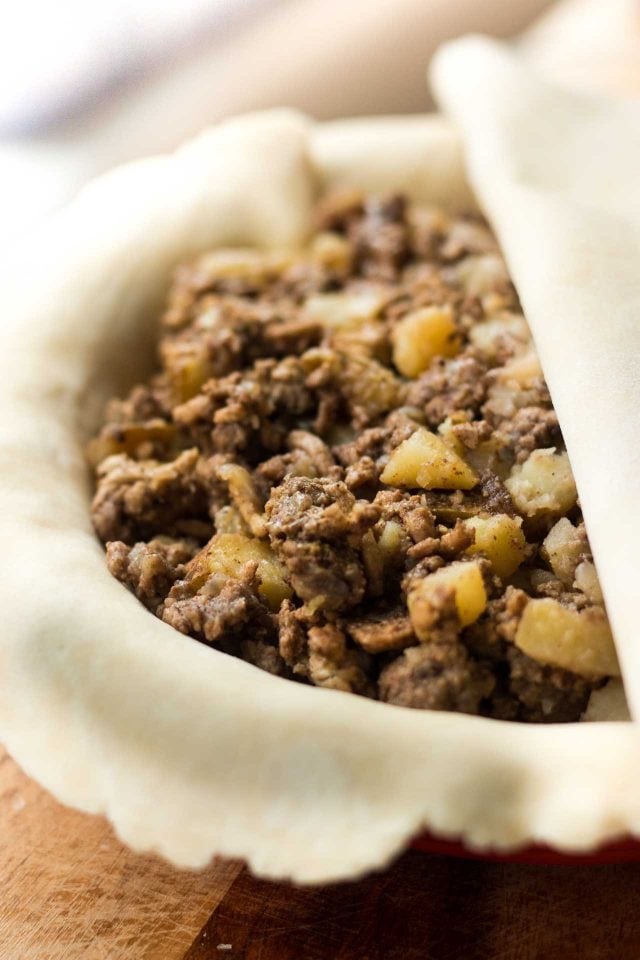 You’ll find all the family-friendly and classic recipes, from Banana Cream Pie and German Chocolate Cake to meatloaf and mashed potatoes in the book. There’s sensible information about avoiding food waste, a six-page chart on grain cooking, and an outstanding chapter called Know Your Ingredients that helpfully lists substitutions for almost all of the ingredients listed. There’s even an entry for “Emergency Water Purification,” which I hope I never need to use, but good to know I have that info should the occasion arise. 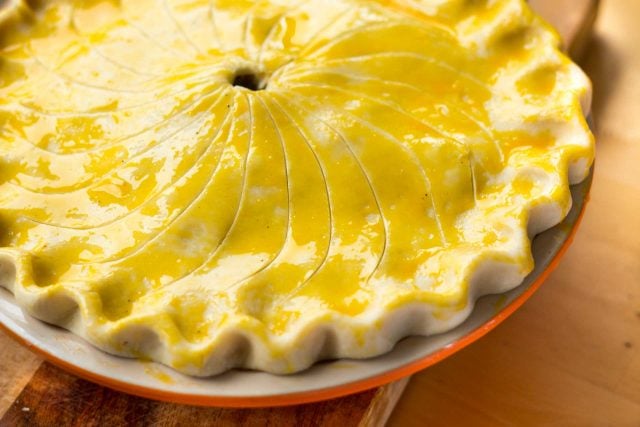 I was also glad to have this Tourtière, described as a “Canadian meat pie.” Its lineage is likely based on French pâté en croûte where a mixture of ground meat seasoned with a spice mixture similar to quatre-épices, that’s baked in a crust. The seasoning is used in larger quantities than it would be in France, which is likely a nod to North American tastes, where spices are more prominent. 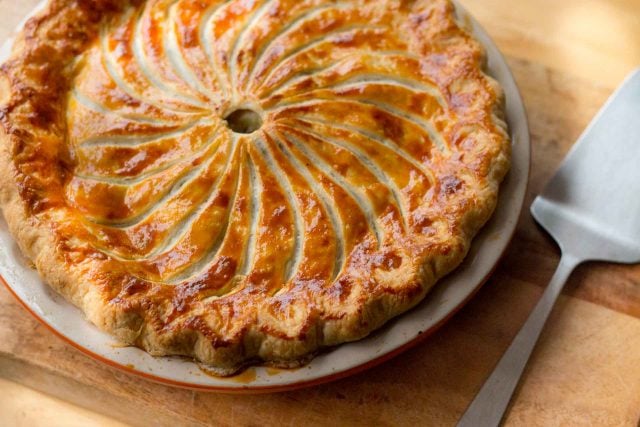 As someone who writes recipes for a living, I was particularly delighted at how remarkably well-written the recipes were. Everything is explained just enough so you know what to do, and how long (and what temperature) to do it at, but with important keywords inserted here and there that tell you what to look out for, what you can (and can’t) do, as well as what the ingredients do, and how to serve the dish. Also, it’s obvious that they did revise and test the recipes since they described the process, which is a tip-off that the recipes were, indeed, actually tested. 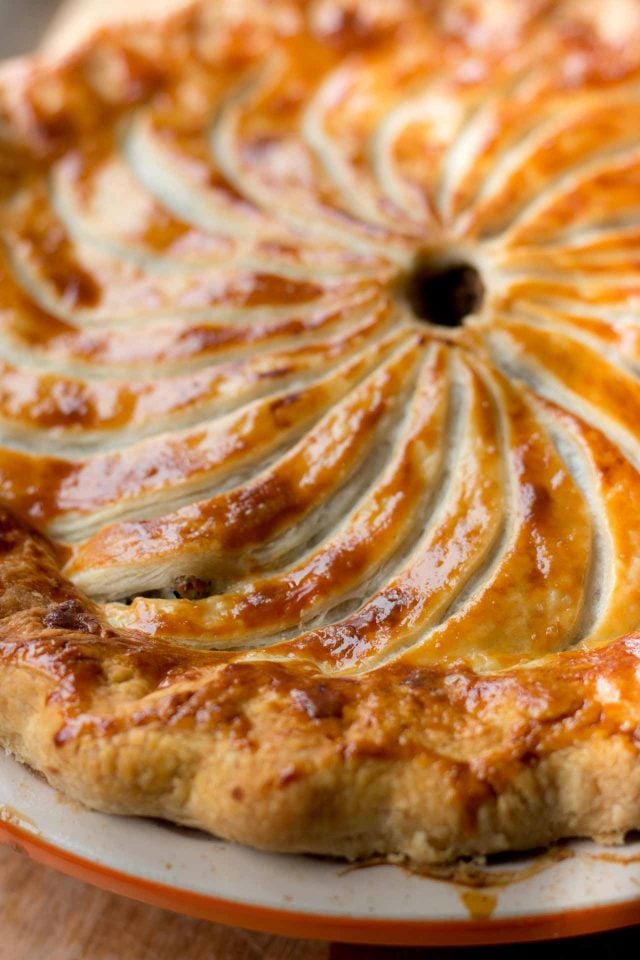 This Tourtière may look complicated, but it’s actually quite easy to make. If you can make an apple pie, you can make this savory tourte. With its pleasing mix of spices, and just-right richness, it’s a great, warming meal on a cold winter night paired with some vegetables or a salad, and a glass of wine, to keep your spirits high. There are a few steps, but the ingredients are easy to find, and you can make the dough at your leisure, then assemble it when the mood – or hunger – strikes, enclosing the filling in the buttery layers of pastry, then, an hour later, present this beautiful tourtière to everyone for dinner.

Adapted from the Joy of Cooking by Irma Rombauer, Marion Rombauer Becker, Ethan Becker, John Becker, and Megan Scott I recommend using ground beef that's not too lean, and if you want to substitute the pork with ground chicken or turkey, I advise using dark meat ground poultry. You could likely swap out another root vegetable for the potato, such as parsnips, carrots, or rutabagas, peeled and cubed. The potato I used weighed in at 10 ounces/280g, if you want to use that as a guide. But the recipe is anything but fussy and you could certainly customize the filling to your tastes and whims.
For the dough
2 1/2 cups (325g) flour
1 teaspoon sugar
1/2 teaspoon salt
8 ounces (230g, 1 cup) unsalted butter, cubed and chilled
6 tablespoons (90ml) ice water, plus more if necessary
1 tablespoon white or cider vinegar
For the filling
1 pound (450g) ground beef
1 pound (450g) ground pork
1 large onion, peeled the diced
1 large russet potato, diced (I don't peel it)
1 teaspoon salt
1/2 teaspoon black pepper
1/2 teaspoon ground cinnamon
1/2 teaspoon freshly grated nutmeg
1/4 teaspoon ground allspice
1/4 teaspoon ground cloves
1/4 teaspoon cayenne or red chile powder
1 bay leaf
1 cup (250ml) beef or chicken stock, or water
1 egg yolk, lightly beaten
To make the dough
1. In the bowl of a stand mixer fitted with the paddle attachment (or in a food processor, or in a large bowl using a pastry blender), mix the flour, sugar, and salt. Mix in the butter at low-to-medium speed until the pieces of butter are the size of small peas. Add the ice water and vinegar and mix on low speed just until the dough comes together, but do not overwork it. For that reason, I often do the last of the mixing by hand. If the dough is too dry to come together, add another spoonful or so of water.
2. Divide the dough in two and shape each half into a disk. Wrap and refrigerate the disks for at least 1 hour. (The dough can also be refrigerated for up to three days, or frozen for up to three months.)
To make and assemble the tourtière
3. In a large skillet with a lid, or a Dutch oven, heat the ground beef and pork over medium heat. Cook, stirring to break up the meat, until it's browned and cooked through. With a slotted spoon, remove the meat to a plate or bowl, and drain from the pan all but 2 tablespoons of fat. (Any meaty juices that are in the pan should be reserved to add later.)
4. Add the diced onion to the pot and cook until translucent, about 5 minutes. Stir in the potatoes, salt, spices, and bay leaf, coating the potatoes and onions with the spices. Stir the cooked beef and pork back into the pot along with the stock, and any reserved juices from the previous step.
5. Bring to a low boil, then reduce the heat to a simmer, cover and cook gently for 30 minutes, stirring once or twice while cooking. Transfer the mixture to a small bowl, remove the bay leaf, and cool to room temperature or chill in the refrigerator.
6. To assemble the tourtière, remove the dough from the refrigerator and on a lightly floured surface, roll one disk of the dough into a 13-inch (33cm) circle. Gently drape it into a deep 9- to 10-inch (23cm) pie plate or pan. (The authors say this can also be baked in a similar-sized skillet, with an ovenproof handle.) Scrape the meat mixture into the dough-lined pan, then roll out the second disk of dough to the same size, and drape it over the pie. Tuck the two pieces of dough that are overhanging the sides under the rim, inside the pie plate. Crimp the edges and chill the pie for one hour, or freeze it for 15 minutes.
7. To bake the tourtière, preheat the oven to 375ºF (190ºC). Brush the egg yolk over the top of the pie dough, cut a hole in the center, and make any decorative marks you wish in the top with the tip of a sharp paring knife. Bake the pie until the top is golden brown, about 45 to 50 minutes. If necessary, you can run the pie under the broiler a minute or so to get it to brown nicely. Let cool 10 minutes before serving.

Serving: Serve the tourtière warm with a green salad or a side of vegetables, such as steamed green beans. 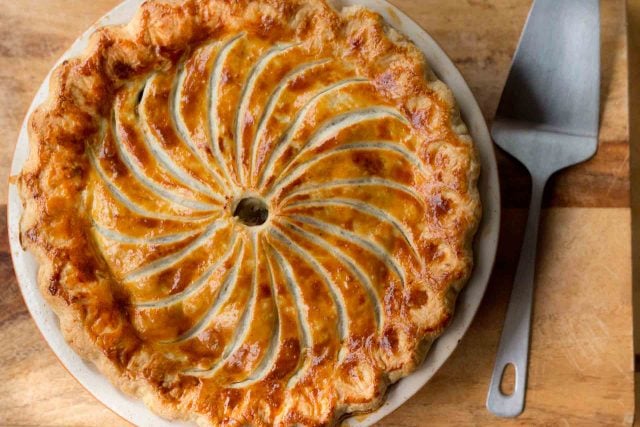 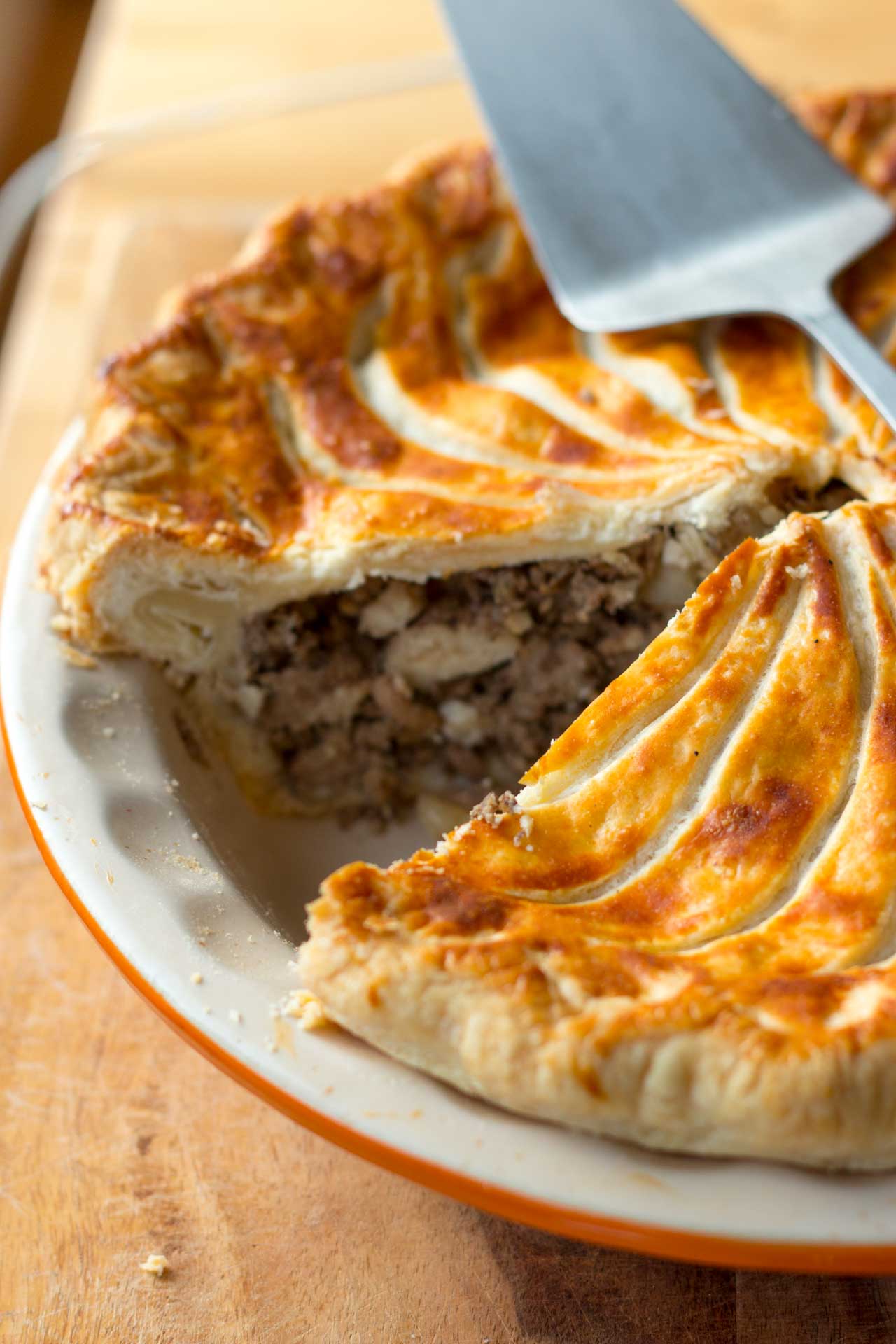