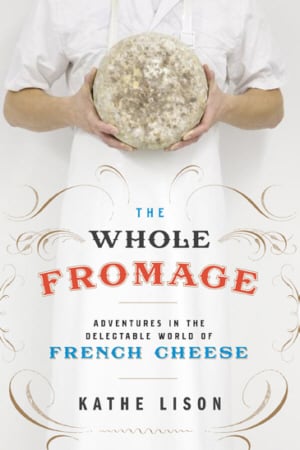 Look, I like cheese a lot. But didn’t think I could get into an entire book on the subject. And as I read the first few paragraphs of The Whole Fromage, my suspicions were almost confirmed and I was considering putting it down because, like cheese (which I’m surrounded by on a daily basis – and I’m not complaining!), a well-edited selection is usually my preferred way to enjoy it. Fortunately I kept going and found myself completely absorbed in the book on les fromage, the subject of Kathe Lison’s obsession. And her book is a series of interesting essays as she traveled around France, visiting cheese producers, from the mountains of the Jura to the caves of Roquefort.

It’s hard to write about cheese because the scents and flavors that come to mind, used to describe the taste and smell of les fromages, aren’t often very appealing; barnyards, cattle pens, rotting milk, and the laundry bin in men’s locker rooms after the big game, often come to mind. But Kathe Lison visited some of the most intriguing cheese regions in France – from Langres to Beaufort, and recounts her visits cheese caves, curd tastings, meetings with artisan cheese producers, and an occasional brush with a cranky character or two.

Especially interesting are her observations about how cheese, while a product of the earth, is now sometimes the result of high-technology, such as Roquefort, where technology help determine how the cheese is fabricated and ripened. As the book winds down, there is an interesting discussion of how a country that was once so anti-fast food that a farm advocate bulldozed a McDonald’s (which has been rebuilt, and the lines are now three-deep at the counter) has embraced technology and standardization to a large degree, including in cheese production. Yet that scientific attention to precision can yield consistently excellent cheese, in addition to the hundreds of other cheeses produced in France – some made in small batches with the milk of local goats, to the giant wheels of mountain cheese ripened in larger facilities up in the alps, then shipped all over the world.

As a cheese-lover myself, it was interesting to read her personal stories as she traveled across France to uncover what makes French cheeses so special. I found the book a terrific read because it was so well-written and explained French cheese from a narrative (and opinionated) point of view – with an obvious deep affection for her subject. 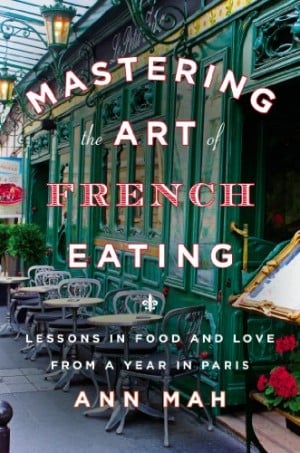 Mastering the Art of French Eating

I met Ann Mah a few years ago when she was volunteering at the American Library in Paris. At the time, I had no idea that she had recently married an American diplomat and was biding her time, trying to figure out where she belonged in a city where she’d been left by herself, while her husband was stationed in Iraq. While it may be everyone’s dream to be stuck in Paris, it can be a challenging place, and Ann had to overcome learning the language, and finding out where she fit in. So she decided to take on French gastronomy and learn more about the different foods, which helped her to understand France and master the most famous foods from this country.

Each chapters touches on a different French food – from Salade lyonnaise to Andouillette (which I think you have to be French to enjoy), Ann takes a trip to the regions and learns from the sources the origins of these foods, and how they should be prepared. Each chapter ends with a recipe which helped her make use of her new-found knowledge. The title, and the book itself, Mastering the Art of French Eating, gives a generous nod to Julia Child, the most famous American expat who tackled French cuisine and brought it to cooks in America. And while Ann certainly isn’t comparing herself to la grande dame, there are parallels to both their stories and she credits her as inspiration for someone coming to terms with her life, courtesy of la cuisine française. 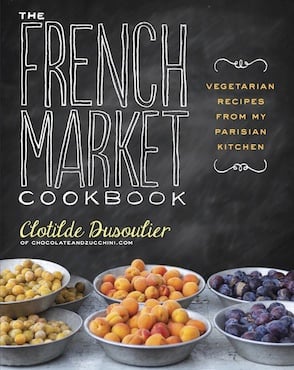 La cuisine végétarienne used to draw snickers when people talked about France, thinking that it’s a country of meat-eaters with little tolerance for anyone who forsook the pleasures of the (animal) flesh. Thankfully times have changed and one sees more and more vegetarian restaurants (or at least meatless options on menus) than in the past, although I’m still waiting for someone to open a major restaurant in Paris that celebrates the bounty of fresh vegetables rather than the rather sad meal I had a few weeks ago where a vegetable tart was covered with dried rosemary (in July!) and dessert was so dark, dense and heavy, it brought back memories of whole wheat and honey-laden desserts best left back in the 1970s.

In the meantime, Clotilde Dusoulier presents 90 recipes in The French Market Cookbook, culled from her Parisian kitchen, which are a breath of fresh air. Everything is easy to tackle, and even the most inexperienced cook could work their way through this book with ingredients that are easily found – no matter where you live.

French cooking is more than just steak-frites and Bœuf Bourguignon, there’s Couscous with Vegetables, which, as she mentions, is as close to a national dish of France as Blanquette de veau. (Pass the harissa!) Tomato-mustard tart sounds like a good way to use up those extra bags of summer-ripe tomatoes, which get baked on an olive oil crust smeared with spicy Dijon mustard. And I’ve got the Chocolate Berawecka (page 193) bookmarked, an Alsatian confection packed with dried fruits, nuts, spices and chocolate. Vive les légumes! 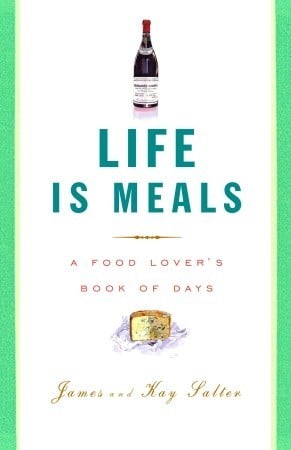 Erudite is a word I don’t think I’ve ever used. (And heck, I don’t think I even know what it means.) But from what I gather in my crowded little head, it means something about people knowing more than I do, or being more literate. If so, that would be the case for Life Is Meals by James and Kay Salter. I’ve had the book on my shelf for at least a year and was a little put off by the subtitle: “A food lover’s book of days” as I imagined it to be a book of wispy little vignettes designed to be cheery, but ending up just being a little too-too.

So I was happy to find that the book covered more than just the usual happy notes of gratitude about finding a second layer of chocolates in the bottom of the chocolate box (which, I’ll admit, makes me happy and grateful as well), but I really enjoyed the mix of well-written stories, entertaining and cooking tips, and food and travel-related reminiscences that this couple shared through their lengthy marriage and partnership. There are dips into French culture, like how Alexandre Dumas slipped away for 6 months later in his life to write a wonderfully inaccurate, yet classic, cookbook. How Vatel was put in charge of an important feast and celebration, but when things started going wrong and an order of fish didn’t arrive as scheduled, he’d had enough and threw himself on his sword. And how Marie Antoinette never said “Let them eat cake.”

But those only make up a fraction of the 366 references to days of the year, which also include the day an American president’s daughter was born (and had a candy bar named after her, the Baby Ruth) and how Irma Rombauer, while recovering from her husband’s suicide, wrote the Joy of Cooking, printed three thousand copies at her own expense, and then the book went on to sell over fifteen million copies.

My favorites parts involved truly wise tips on entertaining. Instead of tired ideas like, “Make whatever you can ahead” or “Ask guests to pitch in!” there are real-life stories, like, don’t bring wine to a dinner party because the host may have already chosen one and they will feel uncomfortable if you bring something and they don’t open it, especially if it’s expensive. As a host, make sure you don’t invite “a writer who’s been panned by a critic” to the same party. (Which could easily happen to me because I have a friend who is good friends with a critic who once ripped me a new one – yikes.) And there are cross-cultural observations, such as at a meal in America, we begin eating after everyone else has been served, but in France and elsewhere, it’s more correct to go ahead to dig in.

I also liked (and agree) with the advice about wine since I have a blanket dislike for wine rules, including the one about only drinking red wine with cheese. And for those that can’t be bothered with all that mumbo-jumbo, some feel you can’t go wrong with the simple rule – “White with lunch, red with dinner.” Reading through Life Is Meals is like someone really sharp and wise, telling you 366 really, really interesting things. And I was happy they included that 366th day for leap year as a bonus. 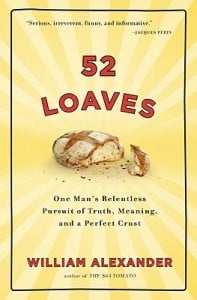 Although not specifically about French cuisine, bread is certainly a vital part of the French diet and arguably, no other country is associated with bread more than France. In 52 Loaves, William Alexander decided to tackle the elusive art of making the perfect loaf of bread at home. Although seemingly simple (after all, it’s just a wad of flour, water, and yeast), making a good loaf of bread isn’t at easy as it seems. Getting the crust brown and crisp and the interior soft and chewy at the same time took the author a full year, during which time he did everything from grow his own wheat in his backyard, to traveling to North Africa and then France, braving train strikes, French verb conjugations, and bags of “pre-conditioned” flour (with additives meant to speed up bread-making, that they’d bought in anticipation of his arrival) to teach a group of monks how to make their daily bread.

I had this book on my shelf for a while and am not sure why I waited so long to read it, but it was hilarious, honest, self-effacing, and sharply written. With the author’s dry sense of humor, each of the fifty-two chapters creates a perfect story in one man’s quest for the perfect loaf. I’m fortunate to have a slew of bread bakeries to choose from, but for those up to the challenge, the author ends the book with sharing his recipe for the perfect loaf of pain au levain as well as instructions for a French baguette. Neither is especially simple (the instructions for the starter takes up 4 pages, includes 17 steps, and spans 4 days), but for those up for the challenge will likely feel the same sense of accomplishment that William Alexander did when he ended his quest. (As did his long-suffering family, that supported his year-long obsession.) But for those who don’t want to tackle a loaf themselves, the reward is a great read nonetheless.

You can find the book listed online or at your local bookseller.