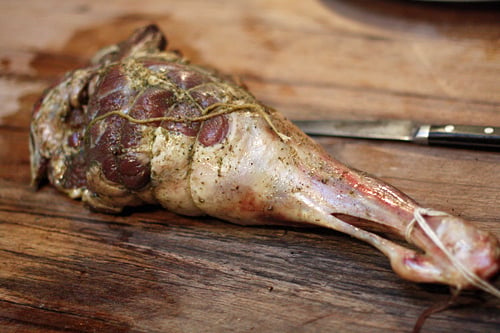 When I started working at Chez Panisse way back in 1983, from the moment we opened the doors at 5pm for dinner, the place was packed. I worked in the café upstairs, which opened because the restaurant downstairs had become a little more formal than anticipated and since the original idea for Chez Panisse was to be a casual dining spot, they opened a café with a no-reservations policy.

At the time, Chez Panisse was garnering a lot of publicity across America and everyone wanted to eat there. So a line formed outside of people waiting for that moment, at 5pm, when the host would go downstairs and open the front door to let everybody in.

Since I was working at the salad station when I started, I was the first to get slammed. For those of you who wonder about why you see an open table at a restaurant but they’re making you cool your heels at the host station, it’s sometimes because if they seat a hundred people all at once, the kitchen is going to get slammed with orders simultaneously. (Which is something that I understand, although when they do it to try to park you at the bar and order a round of pricey cocktails, I’m not so placated.) Since it was lonely old me versus 100+ people, the host would seat people gradually so I could get the orders taken care of and do a good job without totally being overwhelmed. Still, in spite of their efforts to gradually get the orders into my station, that first wave of customers did hit me on a nightly basis and from the moment we opened to when the hands of the clock behind the bar hit the magic number and we stopped seating people at 11:30pm, we were packed and working at full tilt.

(I probably shouldn’t admit this but I think it’s been a few decades and the statute of limitations has worn out, but occasionally someone would sneak behind the bar and move the hands of the clock to 11:30pm so we could finish for the night.)

What made it all fun was the people I worked with, who were sometimes a little sneaky, and at other times, a little crazy. But being all in the same boat really bonds people who are often very diverse and the bottom line is that if you can do the job, it doesn’t matter what color, race, religion, political persuasion, or sexual orientation you aligned with, if you could do the job, others wanted to work with you and you bonded as a team. I used to say that we all really liked each other at Chez Panisse, but we usually didn’t have time to act on it. So there were the restaurant parties, held during off-times or weekends, when we’d all have a big picnic or barbecue somewhere. People would bring food, a grill would be set up, and lots of wine would be poured. And unlike restaurants where the floor staff and the kitchen never mingled, we would just all relax together on a lawn somewhere and savor those moments where we could socialize without the stress and strain of service. 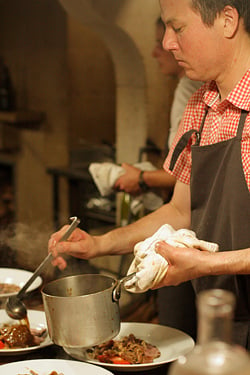 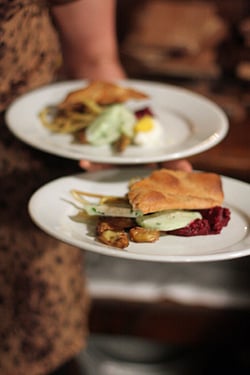 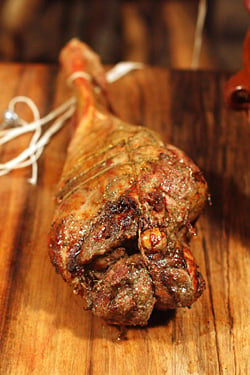 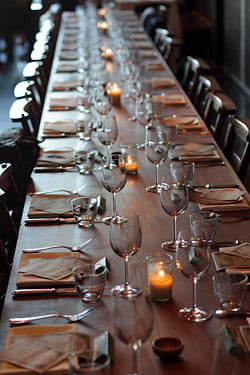 Many of the cooks stayed at Chez Panisse for a number of years, some for decades. And a lot of those who left went on to open businesses like butcher shops or to make cheese or to write cookbooks. So when I went back to the restaurant yesterday to say hi after having left in 1998, there were some people there I remembered from when I started. For those of you who’ve worked in restaurants, you know it’s unusual for people to stay in any one place longer than a year, but I think that the main reasons people stayed at Chez Panisse were 1) Once you got used to cooking with such good ingredients, it was impossible to go anywhere else where decisions of what you could buy and cook with were made by people crunching the numbers, and there’s no where better to be a cook than at Chez Panisse and 2) No one else would tolerate any of us and our eccentricities. 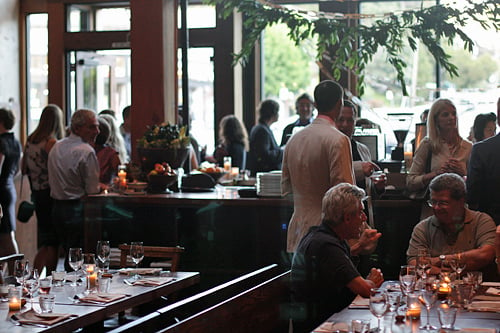 Some of us were really out of our minds, including one of the other line cooks who I spent a lot of nights with engaging in cappuccino-drinking contests. (No wonder when I left the restaurant business my doctor told me I had sleep deprivation.) I also remember dumping a salad that I was tossing for a customer in the face of one of the other cooks because he kept snitching my garlic croutons. (Hey, I needed those for the customers. Even though I wasn’t a pastry cook yet, I guess it was a premonition because you never mess with pastry chefs if you know what’s good for you.) And there were the wild and crazy busboys, many of whom were students from Berkeley High and they were raised in the habitat that is, um, uniquely Berkeley. And I’ll leave those stories for another time. 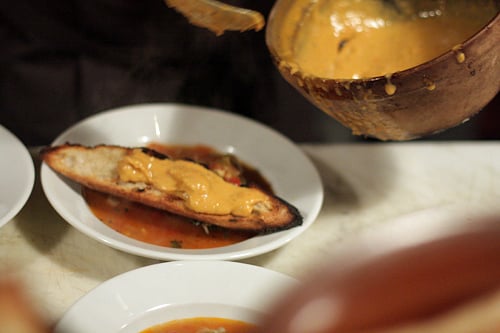 One fellow I worked with for quite a while was Russell Moore. After I’d moved to the pastry department, in addition to finally being allowed to fully express my territorialism to the fullest, I was away from the hectic stress of working the line in the café and baking in the downstairs kitchen where we had a different kind of stress. But when you tell people, it’s hard to get them past the image that you’re just sitting around serving tarts all day. Which is true, but rolling out and baking a tart at home is a little different from peeling two cases of apples and racing to bake off twelve tarts for the sixty orders that need to be filled in the next ten minutes that are just starting to roll in from the dining room. 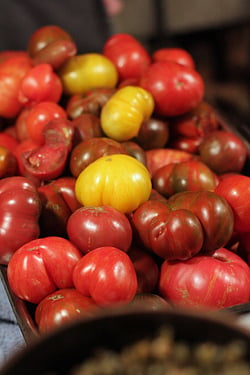 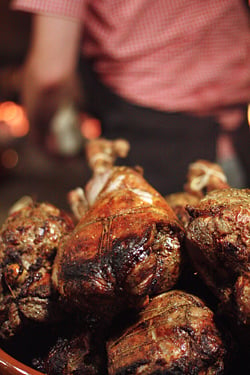 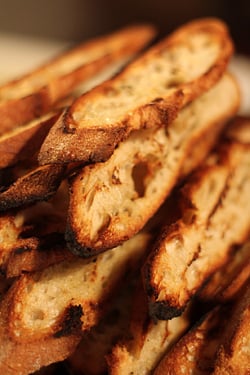 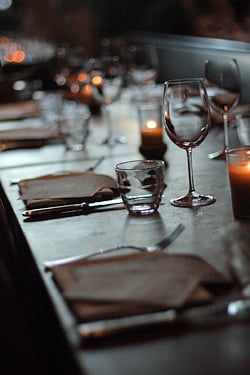 Russ was one of those people who stayed at Chez Panisse a long time and was a chef for the upstairs café. He always had a mild demeanor, which was nice because he seemed to keep his calm during any kind of story. And we joked around a lot. When he started, he had spiky hair and a number of piercings, but I generally refrain from characterizing people too much for their past “looks”, because I once had my hair bleached, which lasted for a few short weeks and people still bring it up today when they talk about me, and it was probably twenty years ago. But I guess it’s better to be remembered for some of the less-innocuous things I did than for others. 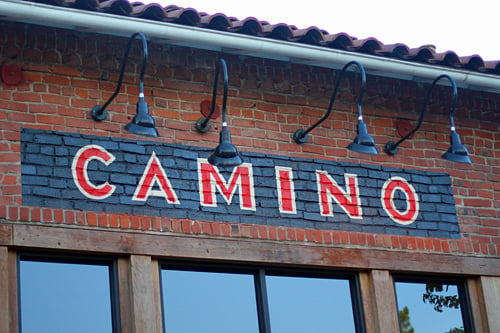 So I won’t mention the blue streaks in his hair as well, but since Russ was one of those people who it’d likely be impossible for him to cook with an accountant hovering over his shoulder, he opened Camino in Oakland. A while back someone tried to pick a fight with me about how elitist it was cooking over fire, which had me scratching my head since perhaps 80% or more of the world’s population likely cooks over fire. I always figured I was the elitist one with my silly little gas oven in my apartment, but in terms of cooking, it really doesn’t get any more basic than that. 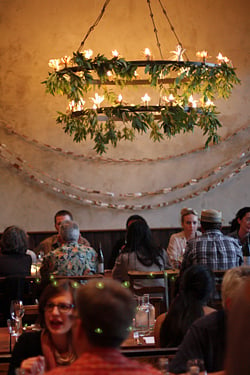 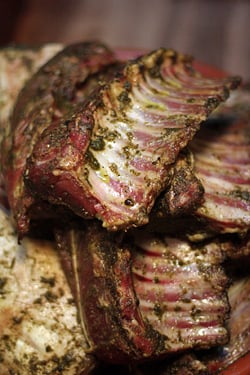 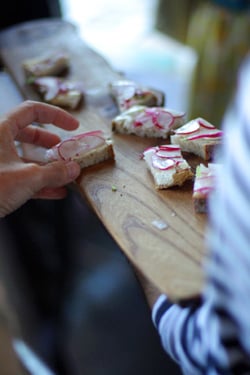 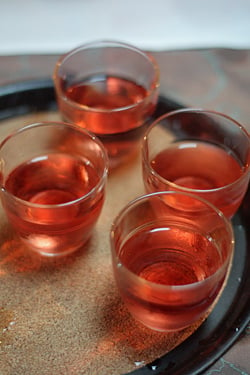 The other thing about cooking over an open fire is who doesn’t like grilled and spit-roasted foods? Camino hosted a party to kick-off the Chez Panisse 40th anniversary weekend and when I saw Russell behind the big wooden counter of his restaurant, sweating from the intense heat of the generous open-hearth, with a dozen or so legs of lamb dangling and dripping over bowls to fresh shelling beans to infuse them with flavor, I ran over to give him a big squeeze.

But the squeeze didn’t last too long because of that insane heat which the blazing fire was throwing off. I don’t know how he stood in front of it all night, but he was – and still is – a trooper. Around him were big, generous bowls of food; vegetables soaking in olive oil and fresh thyme to be grilled, racks of lamb ribs with herbs massaged into their flesh to perfume the meat, and earthenware dishes of fresh figs waiting to be softened by the heat of the fire. The dining room at Camino is a series of long wooden tables and chairs, lined up so everyone has a view of the ‘action.’ But even better than watching Russell and his crew at work is the food. 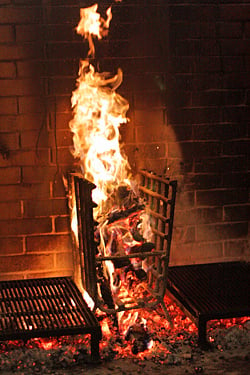 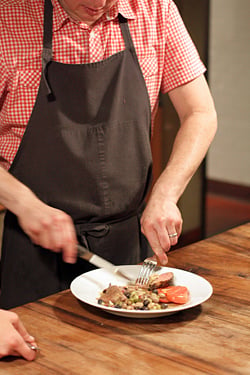 One of the things that drives me nuts at restaurants is when I taste something, as a guest, and wonder if anyone in the kitchen bothered to taste the food they were serving. For goodness sakes – take a plate of something, stick it in your mouth, and give it a chew to see what it tastes like. Sometimes I want to go back in the kitchen and ask the cooks if they like soggy fries (which Romain once did in Paris), or what they were thinking of mixing raw beets, sesame seeds, and chocolate in an appetizer (true story), or

Here, you could taste how much care was put into cooking, from sourcing the ingredients to how they were served, and the Petit Bouillabaise Panisse – a filet of fish in a deeply flavored tomato broth topped with shard of grilled bread slathered with rouille, to the final course of Wood Oven-Roasted Sugar Plums with Grilled Fig Leaf Ice Cream, was outstanding. I forgot how good food could taste that had been made with vegetables from local farms, sparkling fresh fish, and cooked just perfectly oven an open fireplace. It doesn’t get any better than that. 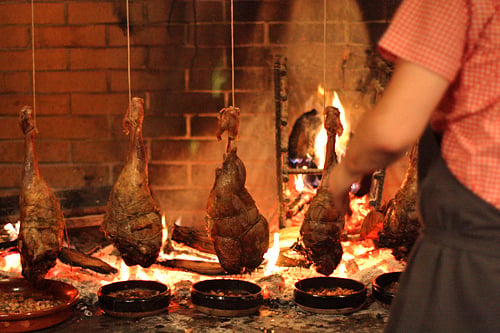 Each course was better than the previous one and the star of the show, the Lamb Leg à la ficelle, a generous plate of house smoked lamb shoulder, grilled loin, and fresh shell beans with anchovy butter, was so good, I was a little sorry that I was so busy socializing (and drinking rosé) that I didn’t give it the full attention it deserved. I woke up this morning wishing that I had polished it all off and asked for seconds. 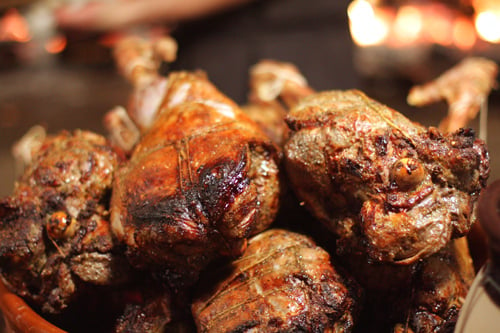 After dinner, when most of the wine was gone and people started leaving, I didn’t want to say goodbye. I just wanted to go back into the kitchen and pick through all the leftovers, especially the crisp bits of roasted lamb left on the counter, as pastry chefs are wont to do because we usually have to skip meals because we’re serving desserts when the rest of the crew is breaking their stations down, cleaning up, and heading home for the night. But instead, I gave Russ one final goodbye and hope to see him for his 40th anniversary when that comes around as well.