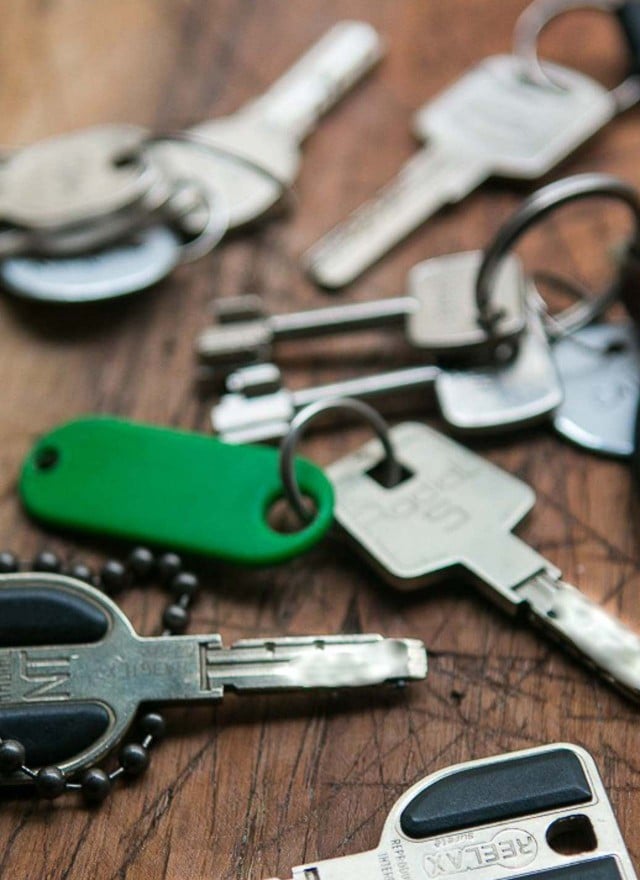 Most of us have had the displeasure of losing our keys or getting locked out of our house or apartment. The first time I felt real terror rising up through me regarding my French keys was when a friend had her purse swiped at a café on the rue Montorgueil a day before she was leaving for vacation. She called me in a tizzy and told me that she had to pay over €1000 ($1120) for someone to come and change her lock.

Because she lived in a swanky part of town, the Saint-Germain area, I though that those prices were unique to that exclusive neighborhood as it seemed like a lot of money. (Note: I found it that it’s not exclusive to that neighborhood.) But on the other hand, being stranded outside your apartment, or being cambriolé (burglarized) – well, it’s easy to see why most people would just pull out their checkbook and get back inside. Although I am not sure why I said “most people” because you don’t really have a choice. Do you?

I haven’t seen digital keypads yet in France, and perhaps they aren’t as secure as regular keys, but they seem a lot more convenient. (Which is another reason they might not have them in France.) But could be a better solution because you wouldn’t have to worry about locking yourself out or losing your keys. The locksmiths might not be happy though, and no one wants them to go on strike. Because then we’d all be out on the street, wandering around in our sweatpants and flip-flops like I was the day I slammed the door shut behind me with the key firmly in place, inside.

I’ve locked myself out twice. Once I was able to get back in because I gave a spare pair of keys to a neighbor and I hadn’t left the key inside, in the lock. But the other time, I had left the key in the lock, inside, which makes it impossible to get in unless you have someone drill a hole through the door. I had gone out to empty the garbage wearing my spring work outfit: Shorts, a tattered t-shirt, and flip flops. I didn’t bring my wallet or phone with me because who takes their wallet with them to empty the trash? – which I do, now, along with my cell phone and a change of clothes. I was alone on the street as the sun was going down, wondering what I was going to do. A few neighbors came to help, trying credit cards and so forth to slip the lock, but no dice.

I thanked them, thinking that it would have been nice if they offered me a place to stay for the next few days, as I wasn’t sure where I would go or what I would do. And in the end, my only recourse was to Système D, the French way of figuring out a quick solution to a problem, and to work my way though a métro turnstile wearing what wasn’t my Sunday best to get to a friend’s place who had my key, hoping to avoid the inspectors that patrol the métro, ticketing scofflaws who try to ride for free. And no, you can’t get out of a fine, even if you explain you’re a tourist who sometimes throws their ticket in the trash after the pass through the gates, which I see people do: If you’re a voyager sans ticket, the fine is €50 on the spot or €75 if you pay it within two months. If they have to come after you for it, it rises to €180. I couldn’t pay on the spot because I had nothing, and because I’m so law-abiding, I would have walked, but a forty-five minute stroll through Paris dressed for business (well, my business, anyways…) was not really an option.

(For those who think the French aren’t enterprising, a group of young people who jump the turnstiles who believe public transportation should be free, have organized to pay into a common “pool,” sort of a makeshift “insurance,” to pay a ticket if one of their lot is caught.)

I don’t mind paying for public transport, especially because the Paris métro service is excellent. But I do mind paying €1000+ to have a door opened because I locked myself out. I don’t really know what it costs elsewhere, but this site says in the U.S., the cost can “…go as high as $150-$250.” (And some people in the comments, in the U.S., were irate about that.) I’d consider it a bargain at this point and I wouldn’t be so freaked out about leaving my apartment, as I am now. Hence, I rarely go out anymore.

The longer I live in Paris, the larger the collection of keys in my possession, meaning the more likely it is that I am going to misplace one. The most cherished key in my collection costs a whopping €125 to have a spare made. In order to do so, I need to supply the company with a copy of my passport, a sworn statement that it’s for my apartment, and a copy of one’s all-important electric bill, which proves that you live in your apartment. It has to be sent registered mail, with a signature required by the recipient, then, signed for again upon its return. These keys are so valuable that I have one locked in my coffre-fort (safe deposit box). Lord knows how much those replacement keys cost, in case I lose the one for that.

Someday, perhaps, we will move toward digital keypads with the same vitesse as people took in Paris to their mobile phones. I’m not sure when that will be, but from now on, I’m going back to dressing up again to empty the garbage, as a precaution, and maybe start paying into the insurance pool that turnstile-jumpers, just in case I need to test my ability to sauter (jump) in the future. In the meanwhile, I’m saving my centimes for another copy of my key, just in case.