Behind the Scenes at Garrett’s Caramel Corn 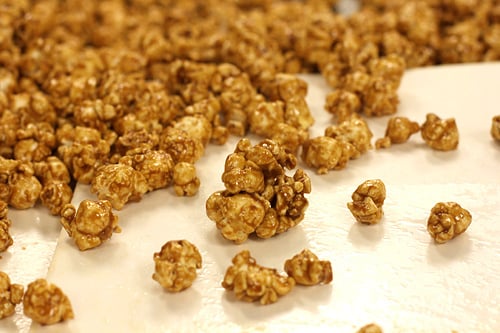 I don’t recall the first time I had Garrett’s caramel corn, but a few years ago I was in Chicago just before Christmas and walked over to the Michigan Avenue store. There was quite a line, and I was told the wait was two hours. “That’s just not possible!” I thought to myself. The line just didn’t seem all that long. But after twenty minutes of standing out in the frosty cold Chicago air, as the wind whipped off the lake and my face felt like it was being pelted with ice water, I’d moved forward perhaps nine inches, so I left, thinking, “No caramel corn is worth this.”

But then the next day I woke up, craving caramel corn, and had no choice but to give it another try, thinking that if I hit it first thing in the morning, I’d have a much better shot. When I got there, the line was already snaking out the door and down the block, and I went home – again – empty-handed. 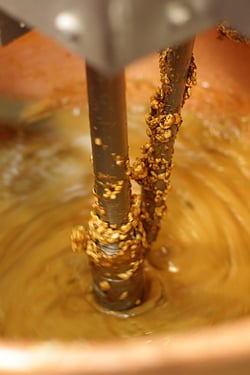 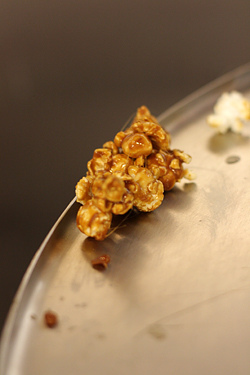 Luckily the lines aren’t so massive the rest of the year (and the other locations are far less crowded) and on my recent trip to Chicago, I walked by one of the other stores and hesitated for the briefest of moments – perhaps a fraction of a second – and a woman passing by said to me, “Honey.. you know you want it. Go in and get it!” So I listened to her sage advice, with her following me in the shop.

I emerged with a big bag of Chicago Mix, the blend of caramel corn and cheese corn which sounds odd, but is one of the best things you’ll ever eat. Man, is that stuff good. So good that the towels at my hotel had these strange orange stains on them which I later realized were from the dust on my hand, from washing them repeatedly after diving in to my bag.

(I actually pre-washed the towels before the maids came in so they wouldn’t think I was up to something weird. Until a friend from Chicago assured me, “Don’t worry. They’re used to that.”) 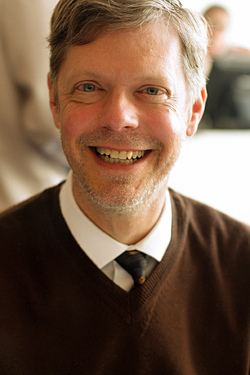 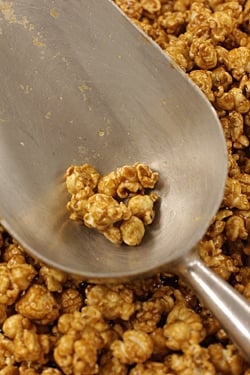 Scott Schroeder defines the word “affable” and is like a boy in a suit, just as excited about the popcorn as any customer. And he’s one of the people in charge of overseeing operations at Garrett’s. He kindly invited me and my friend Louisa to visit where the popcorn is made, which was a first for them.

“Even Oprah hasn’t been in here!” he told me, excitedly. Which was true: even though Garrett’s popcorn was named Oprah’s Favorite Things in 2002 and 2005 (and subsequently they were inundated with orders from around the world), he was gracious enough to give me a peek behind the scenes.

He told me that just after she announced it as her favorite, they were swamped for months (or more likely—years) afterward. So much so that they went on full-tilt popcorn production 24/7, with lines of tins and boxes snaking around every available free space in the production kitchen and offices, waiting for the delivery trucks to arrive. 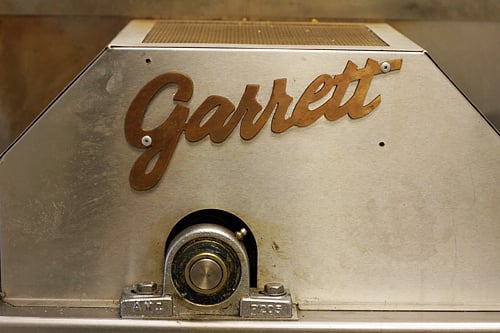 Each batch of Garrett’s starts with air-popped popcorn. Interestingly, a lot of the ingredients are locally sourced, especially the corn, which is their own special hybrid. As Scott says, “All the ingredients are completely pronounceable.” The corn is not genetically modified, the cheese is local, and the butter is from Wisconsin.

The exact recipe, of course, is a secret (I would have tried to scribble it down, but my hands were too busy trying to swipe clusters that passed before my eyes, and nose), but basically Garrett’s is made the old-fashioned way; the few machines that are used are no bigger than what a corner bakery would use, production is done by hand, and once the caramel corn is finished cooking, a few strong women give the caramel corn a good mixing by hand to make sure everything is quickly cooled and all the ingredients are evenly dispersed. 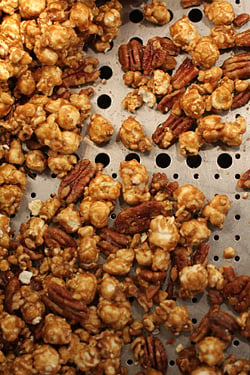 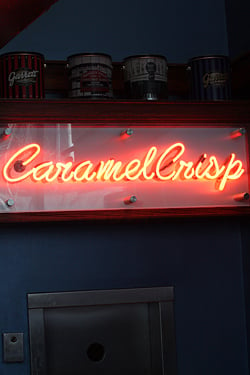 Less than a dozen machines with gleaming copper bowls are lined up against the wall, and some of the popcorn is made in the shops, too. But because they’re so popular, the kitchen here has to handle the overload and the popcorn that’s shipped to various places. 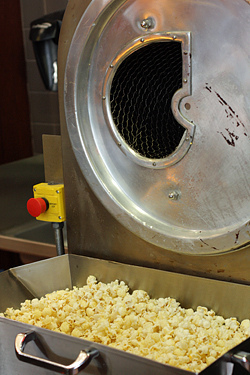 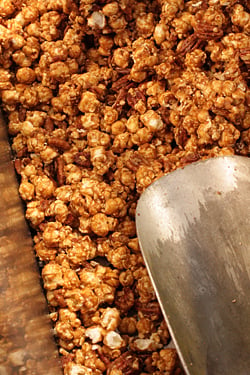 Scott explained there are two types of popcorn: “mushroom” and “butterfly.” The mushroom has a rounded head, and he told me that movie theatres like to use that kind because it takes up more space. (Next time you go to the movie, check and see. And thinking about it now, I think those boxed caramel corn that don’t have all that much flavor must use that mushroom-shaped popcorn.) 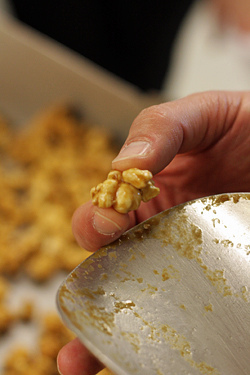 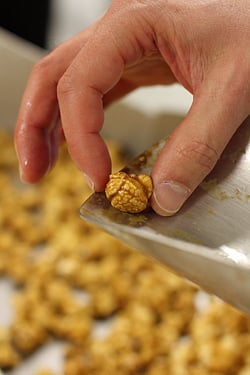 The butterfly popcorn has lots of divots and crannies, which provide places for the caramelized sugar and butter to rest and harden in. The combination of both gives each handful an interesting lightness along with the full-on buttery caramel flavor. 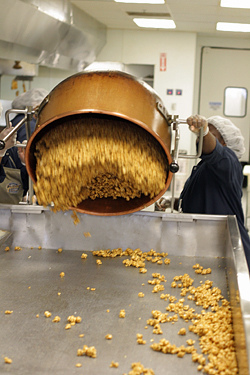 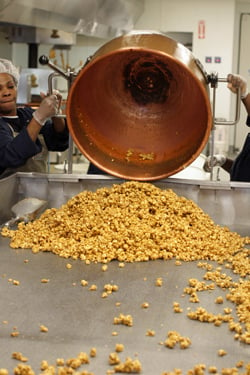 Once the caramel is finished, the popcorn is added and everything is stirred up. Some of the blends include pecans, cashews, and almonds. 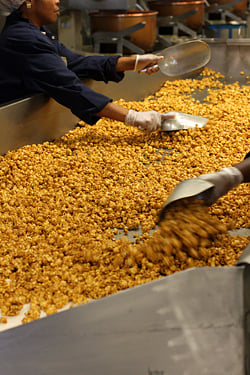 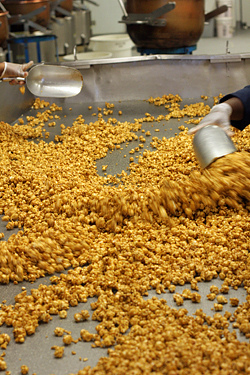 Scott, who isn’t just the vice-president of the company but one of its biggest fans (after me), said that the cashew blend is really good with Champagne (which I’ll have to try) and he puts the cheese corn on tomato soup!

Once everything is all mixed up, it’s quickly poured out onto a big table and stirred madly to separate the sticky kernels before then harden. I was tempted to dive into the mosh pit of caramel corn on the table, but didn’t want to get asked to leave. 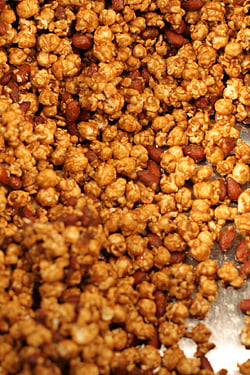 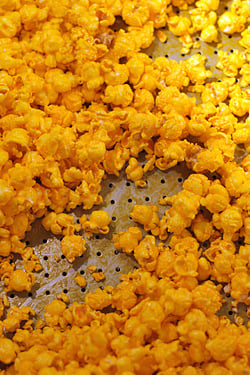 In the stores, popcorn is popped as well, and the mixtures are made fresh throughout the day. Which is also a great marketing tool because as you walk down certain streets in Chicago, the buttery caramel fragrance draws you in, similar to the smell of butter cooked in croissants coming out of bakeries in Paris every morning. And unless you’re stronger than me (or susceptible to the suggestion of passing strangers), you are powerless to resist.

Scott took me over to the flagship Michigan Avenue store after lunch at Blackbird, and he was behind the counter, where things were in full swing. I sidestepped the long line (because I live in Paris, I’m pretty fluent as sliding in front of others without giving it a second thought) and went behind the counter where they were packing up popcorn that people were ordering by their own blend. 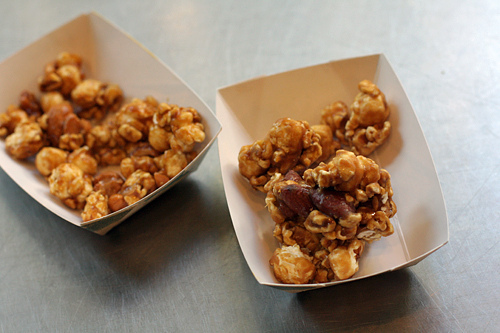 A customer leaned over while I was talking to Scott, and taking pictures, and said, “Did you win some sort of contest of something?” And I felt like I did. 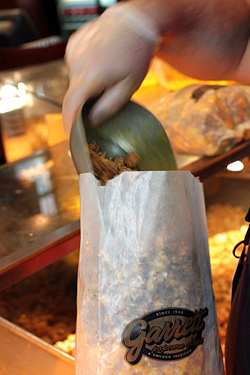 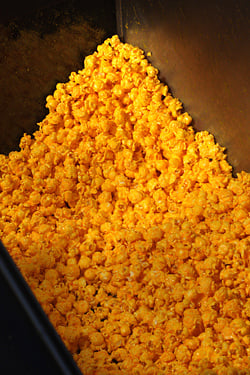 Getting back to what fans have dubbed Chicago Mix, it’s an intriguing blend of caramel corn and cheese. (They use real cheese to coat the popcorn.) If it sounds odd, imagine the salty-sweet combination, light kernels of popcorn covered with tangy cheese and other kernels, crisp with buttery caramel, mingling as you snack on both.

Okay, maybe it’s impossible to describe. But just you can’t stop eating it. It was actually something invented by customers. People used to buy bags of regular caramel corn and cheese corn, then mix the two together. So they finally decided to do the blending in the shop themselves. And to get over the tell-tale “orange dust” problem, Louisa said eats her Garrett’s with chopsticks, which prompted me to tell them to create an Asian spiced mix that could be sold with a pair of chopsticks, called “Louisa-Mix.” 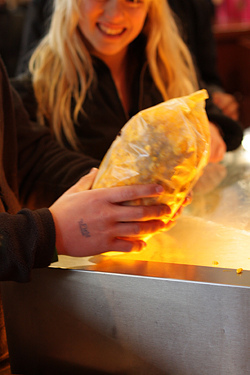 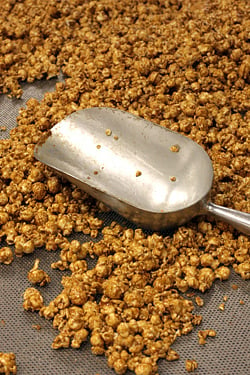 I also proposed creating my own flavor for them, which would mean I’d have to come back and oversee the production of. 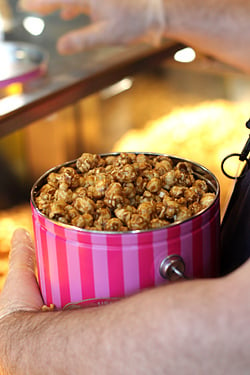 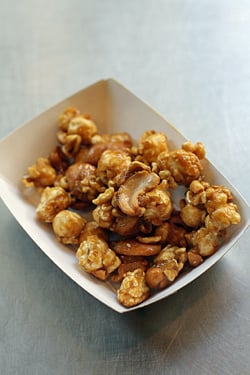 When do I start?

A Visit to Patrick Roger