Menu
« Do Tread On Me
Live, Taped, Threaded and Blogged » 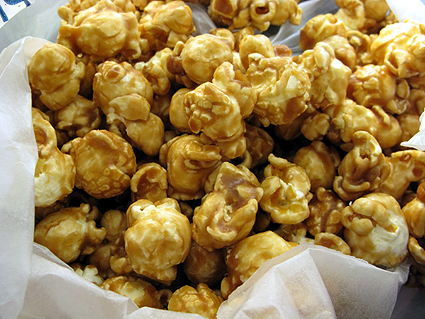 Last time I was in Chicago, it was a few weeks before Christmas and I joined the queue for Garrett’s Caramel Corn. The line wasn’t that long…or so it seemed, and when people told me the wait was two hours I didn’t believe them. That is, until after I’d waited for 20 minutes and barely moved three steps forward.

So I left and decided to forget about it.

But later that night, I was, like, “Damn, I am so craving my Garrett’s.”

And the next day I joined the line again only to be subjected to another endless wait. Although I’m Parisian and believe that lines are only for other people, I quickly deduced that I’d better not take cuts in front of any of those hardy midwestern-types who could kick my butt back across the Atlantic.

I left empty-handed and sad—but who isn’t more thrilled than I am that Garrett’s opened in New York City? Who’s happier than I am now?

If you go, get a mixed bag; half-caramel and half-cheese corn. While I normally shy away from ‘cheese-flavored’ snacks, Garrett’s cheese corn is insanely-good and I’ve been known to plow through a 3-gallon drum of the mix in a startling short time.

I just wonder when they’re going to open in Paris.
If they do, that’ll be the end of me.