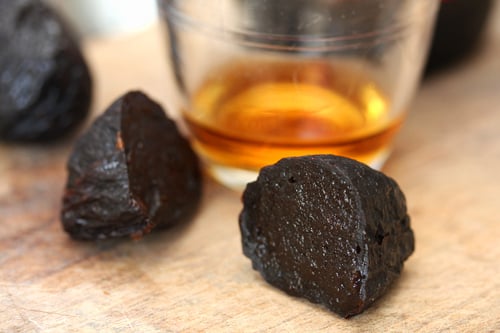 In what could be the hardest-sell on the planet, I always try to talk people who come to Paris into trying Pruneaux d’Agen fourrés, which are prunes stuffed with prunes. In spite of their reputation, prunes are a great delicacy in France and rightfully so; one taste of even just a regular pruneau d’Agen (especially mi-cuit, or “partially dried”), and you’ll plotz the first time after your first bite. (Although sometimes you need to give it a few hours for the full effect.)

To make them, the pit of each prune is yanked out with long-nose pliers, then the prune is refilled to the point of nearly bursting with smooth prune puree, sometimes with a touch of Armagnac. You’ll find the filling dialed-up with almond cream or chocolate or orange zest in some cases, but I prefer nature, or plain. Because that’s the kind of guy I am. 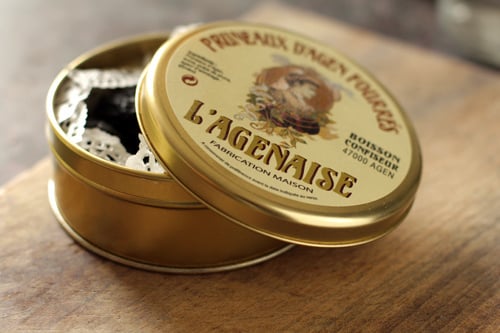 If you’ve ever invited to a French person’s home, a tin of Pruneaux d’Agen fourrés is a gift par excellence. A friend of mine who comes to Paris infrequently flipped out when she returned back to the United States after her last trip and couldn’t find them, making them one of those Only-in-France (or Europe) items. I suppose there really isn’t much pent-up demand for prune-stuffed prunes elsewhere. And her search turned up nothing, which reminds me that I’m overdue to send her a tin.

I’ll have to admit that I don’t buy them as often for myself as I should either, but a visit to a candy store last weekend rekindled my love of them. Maybe when my system has recovered from fresh cherry season, I’ll go get a tin for myself.

So maybe I convinced you, maybe I haven’t. If you need a little more prodding, try them with a glass of Armagnac alongside. And if that doesn’t work, I’m writing you off as a lost cause—so don’t expect any packages on your doorstep.


For those willing to take on a search, use some of the tips in How to Find Foods Mentioned on the Site, and perhaps you’ll find them if you’re interested in trying them. Otherwise, you’ll just have to come visit – since I don’t deliver.