Trieste is located in the upper corner of Italy, located just at the border of Slovenia. It’s a compact port city and in addition to Slovenian influences, you might be surprised to come across a shop carrying beer steins, since there are residual Hungarian and Austrian influences in the melange as well. But unlike other Italian cities, you’ll find people drinking big glasses of beer, and dining on sauerkraut and dumplings…and I mean, big, hearty ones…not just gnocchi, although you’ll find those too. Which I certainly did, along with perhaps a little gelato here and there. 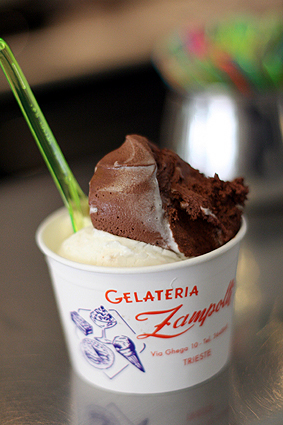 My daily dose of heavenly gelato from Zampolli

Since my time was limited, I wasn’t able to explore the areas far out of town, which I’ve been told were where the best food was to be found. The restaurants in the city were a bit uninspiring, although the bars filled up in the early evenings and were great places to have a Gingerino, or my favorite aperitivo; an oversized wine glass (God bless the Italians…) with a shot of bitter orange aperitif, chilled prosecco, and a slice of blood orange served with a handful of ice, the Spritz.

My first day in Trieste, I discovered this amazing little store, Trieste Funghi Shop, filled with nothing but dried mushrooms. They had a glass showcase that was packed full of them and nothing else. These were other discoveries as well:

Well-priced and centrally located, this is a wonderful little hotel right on the main street of Trieste, close to the sea, and just about everything else.

(Note: A taxi from the airport to downtown will run you around 55€, since it’s located about 40 minutes from the city-center. There’s also a shuttle bus that runs downtown every 30 minutes to and from the airport. If arriving by train, the station’s located downtown, and a short walk or taxi ride to your hotel.)

The best gelato in Trieste. I went daily for my fix, which may have included riso (rice) or pistachio made from Sicilian nuts, or gianduja, or nocciolo (hazelnut), always paired with a smear of cioccolato gelato.

Pasta-maker specializing in handmade extruded pasta in all shapes and sizes. 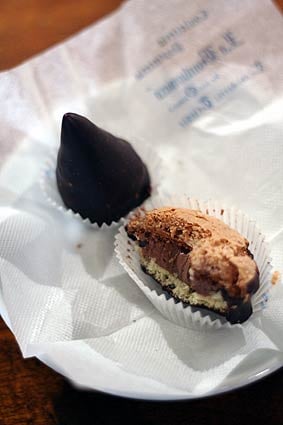 My favorite chocolate pastry in Trieste, at La Bomboniera.

Specialty confectionary shop, founded in 1850. Beautiful wood cabinets filled with cakes and chocolates to eat on the premises with coffee, or to take away. The giant almond macaroon filled with chocolate cream then dipped in dark Italian chocolate was superb. I like it so much, I asked for another! A must.

Restaurant featuring raw seafood specialties and house-made pastas, which you can finish off with a sgroppino; lemon sorbetto blended with fizzy prosecco and a shot of vodka.

If you like meat, this tavolo caldo is for you. Spartan surroundings and big plates of boiled sausages, tongue, and brisket all served with a pile of rather good caraway-flecked sauerkraut.

La Piola
Via Nicolò, 1/B

Downtown restaurant frequented by locals serving standard fare. My pasta and chicken were satisfying, but average. However the staff was friendly and when the restaurants filled up with locals by 9pm, the atmosphere made up for the food.

My hang-out, the best caffé and bar in Trieste. Friendly staff and lively clientele.

(I was in Trieste, attending Illy’s Univeristà della Caffè you can visit their web site. Most courses are aimed at professionals although they’ve told me they plan to offer classes to consumers in the future.)