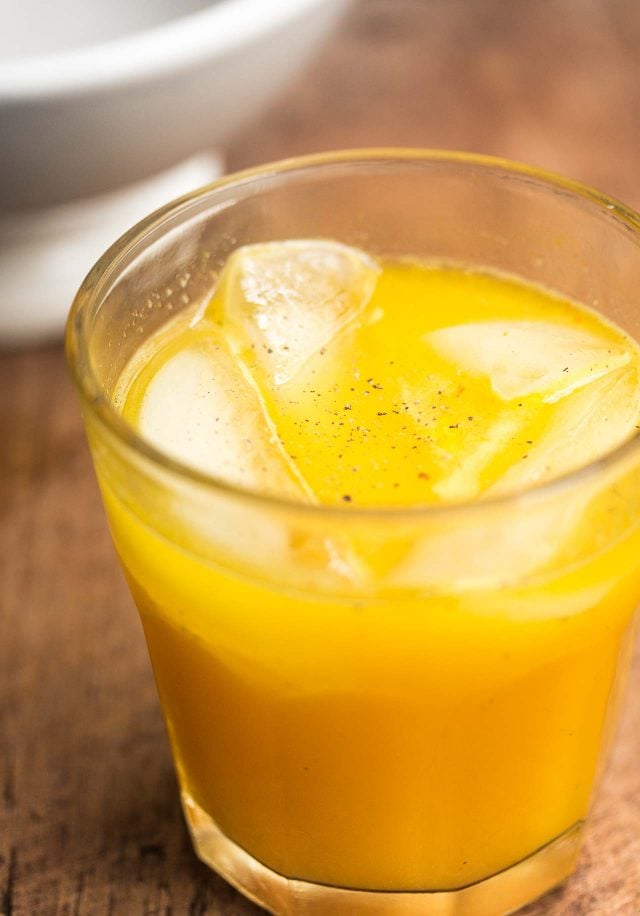 I’m late in the game, but I have longevity. At least that’s what I like to think when I’m drinking turmeric tonic, which may (or may not) prolong that admirable longevity I’m boasting about. I don’t know how true those claims are, but I do know that I had my first taste of it in Los Angeles, at Sqirl, and I loved it.

The juice thing has come to Paris, but they’re not widely available freshly made. And I haven’t really seen fresh turmeric juice anywhere, although I haven’t really looked. Usually I don’t get farther than the wine aisle at the grocery store. 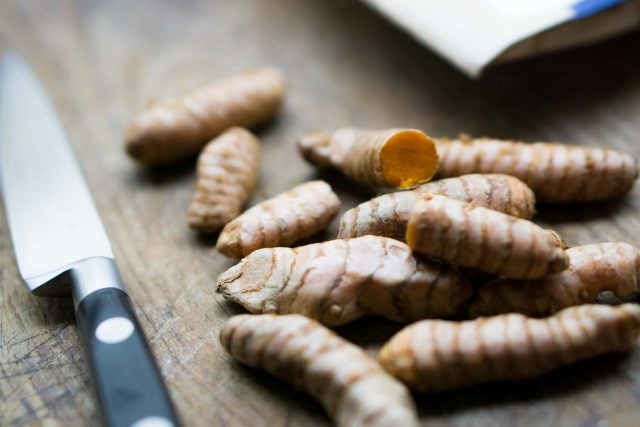 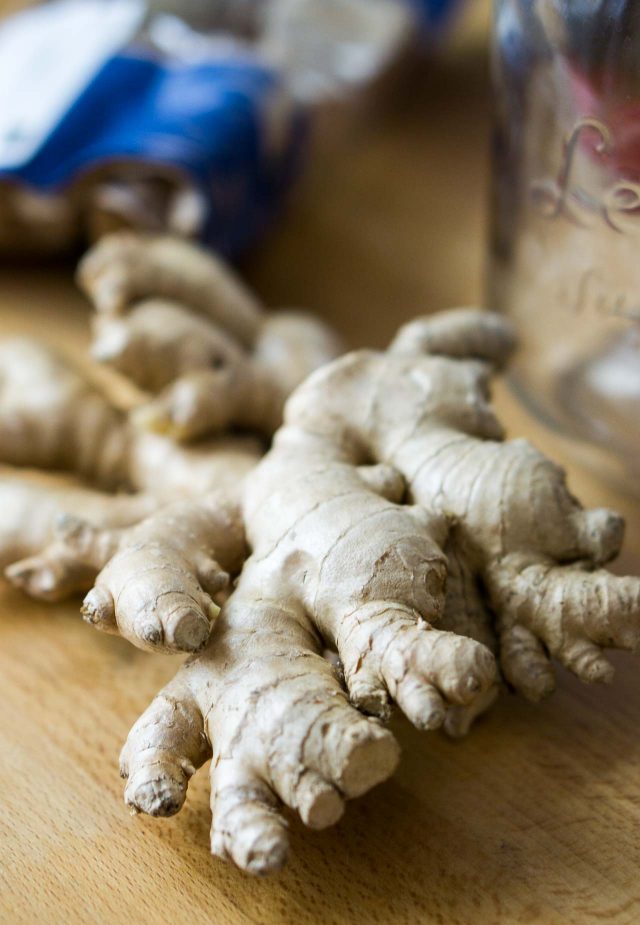 I recently had to give up coffee, which others online were freaking out about, more than I was, although I still have an espresso once in a while. (Which seemed to calm everybody down.) So I was looking for something that would rev me up during the day. Some say turmeric has all sorts of healthful properties, which is certainly a bonus, but I really enjoy the flavor of it; it’s earthy and ruddy, but not bitter or off-putting. Sometimes poured over ice, or just on its own, with hints of citrus and a jolt of fresh ginger, I wanted to have it more often, which meant making it at home, rather than jetting back to L.A. 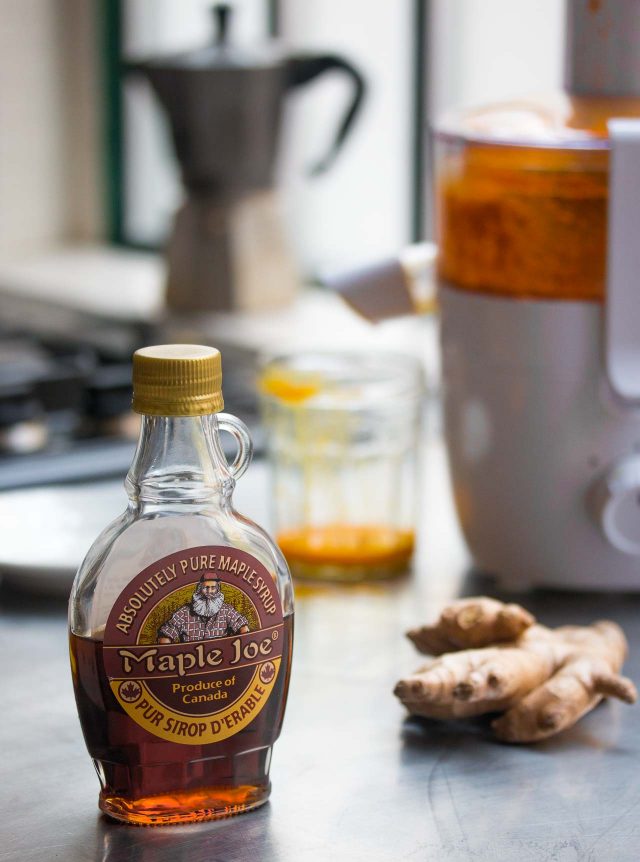 In other news on the home front, we also stopped drinking store-bought orange juice in favor of carrot juice. I haven’t found it fresh in any of the natural foods stores in Paris, just shelf-stable carrot juice in bottles on the shelves. I made the mistake of taking a swig of it the morning after Romain brought it home, and it was like chugging a glass of tepid unseasoned carrot soup. Not the first thing I want to drink when I wake up. Or really, at any time of the day. 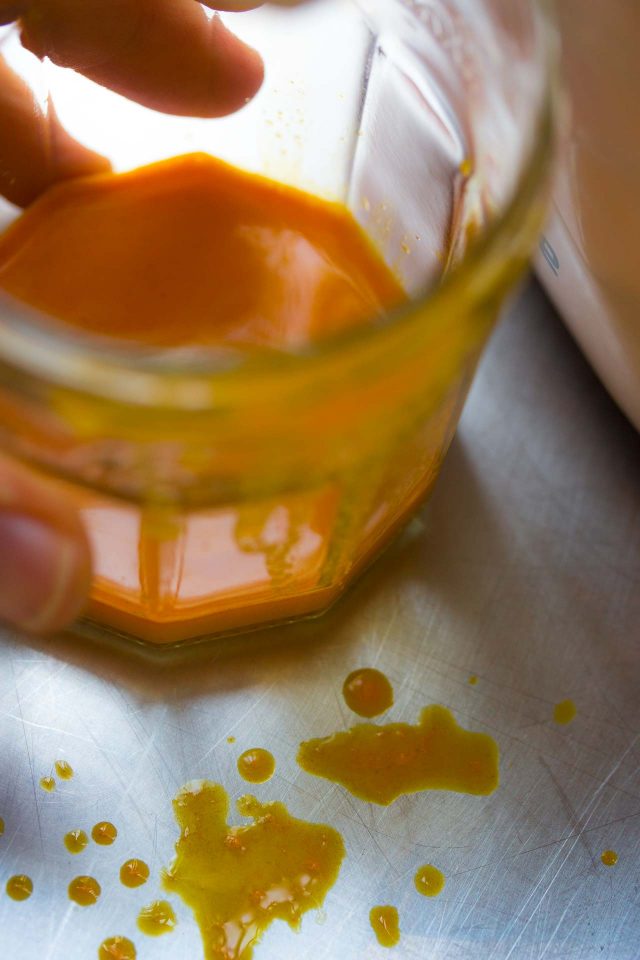 Hence, I went out and bought a centrifugeuse, which I had to practice pronouncing before I went out to buy one. Repeating the word over-and-over under my breath on the 56 bus, I ended up at Darty, a store that specializes in large and small appliances, whose website listed a ton of juicers (which I’ll say in English from now one, since that’s easier to write, than spell centrifugeuse, too) – but at the store they only had a few on display, not as many as on their website.

I had planned to get a medium-priced model with a good amount of power, but saw a very inexpensive one for only €29,99 ($37) which was a lot smaller than the one I came in to buy. Even though I have a bigger kitchen now than I used to, space is still an issue. Plus I think every juicer comes with a warning that you’re only going to use it only a few times before you put it in your cabinet and forget about it, or sell it. 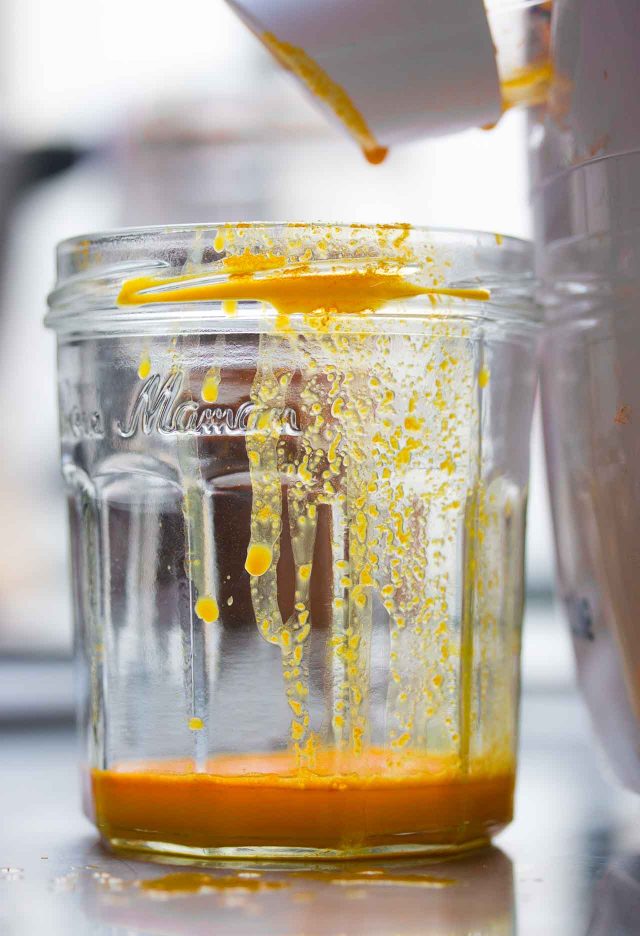 So I decided to go with the €29,99 model. When I went to their website on my phone to check the wattage (power), I noticed it was marked €5 less than the price in the store. When I asked the very nice salesperson if they would honor that price in their own store, she said no, but I could order it online and pick it up in the store. But I would have to wait an hour for the order to process. Hmmm… 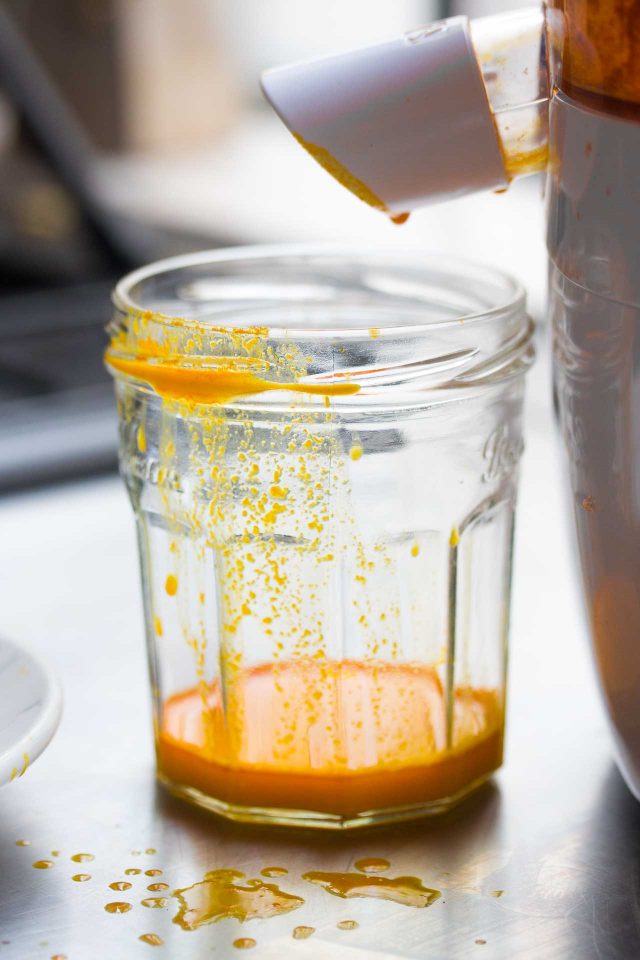 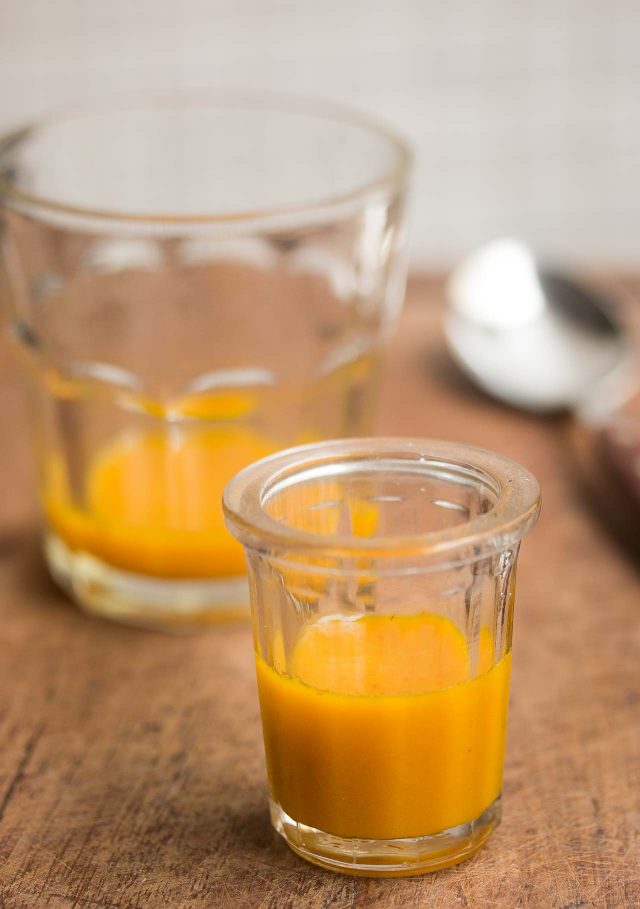 While we were discussing what I should do, she noticed how much trouble having with the word centrifugeuses and asked me if I wanted to speak in English. I said “Non, because it’ll be more expensive if I do” she got a (very) good laugh out of that. Still, I wasn’t getting €5 off, but €29,99 was a pretty good price for what turned out to be a fairly powerful juicer, at least for my needs, namely, juicing turmeric and ginger. 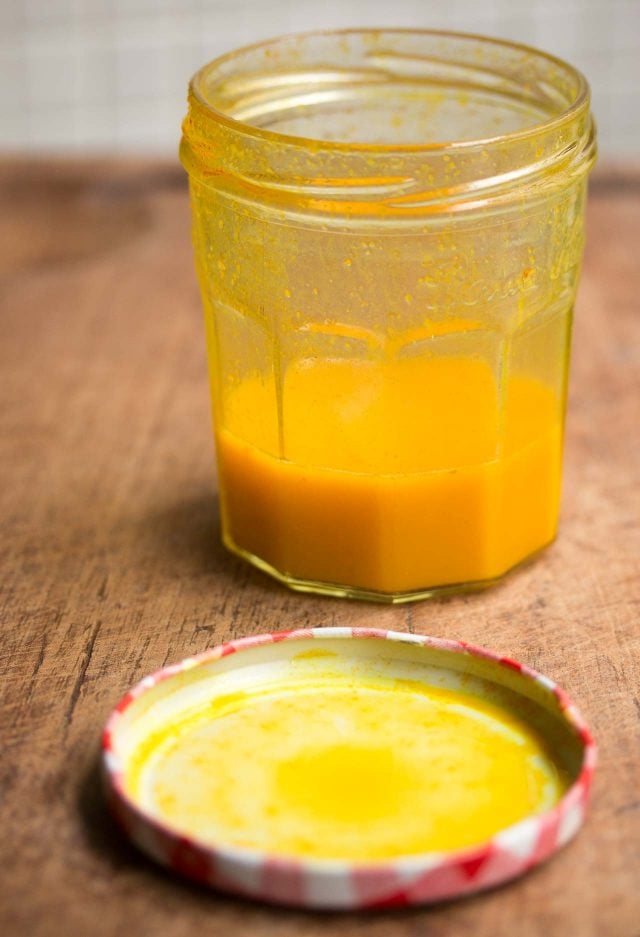 (Of course, when I went back to the store the following week to buy something else, the juicers were marked down to – yup … €24,99.) 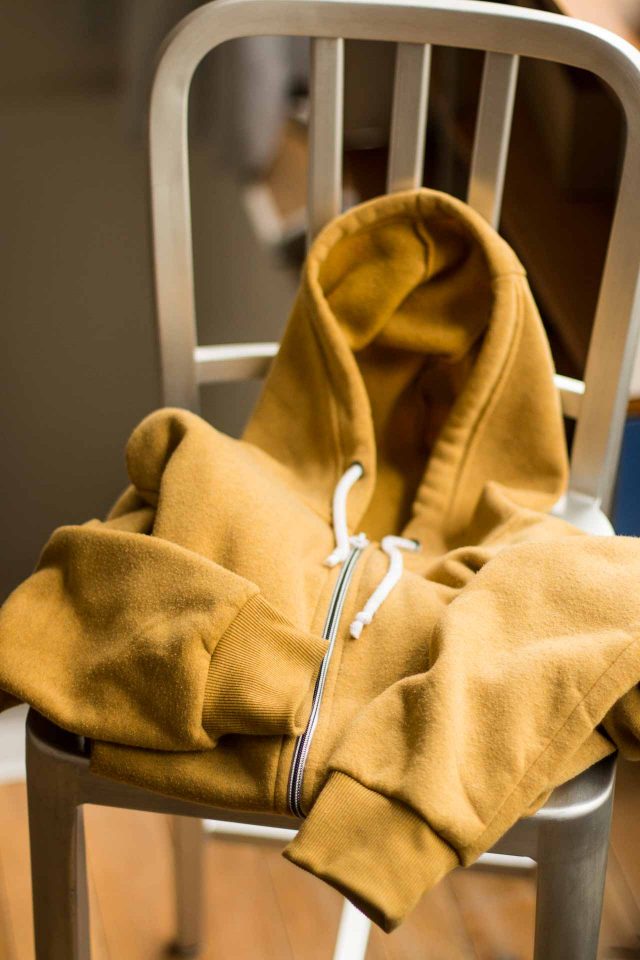 After my first try at juicing curcuma (turmeric), the pristine, crystal-clear plastic on my brand-new juicer turned bright orange, as did my fingers. I also learned why people who live in countries where turmeric is used frequently wear brightly colored clothes.

Living in Paris, my normal color palette is black, complemented by more black, with sometimes a bit of grey thrown in. However, I’ll admit that I’m throwing everyone for a curve and adding some blue to my wardrobe. But I’m finally making use of the mustard-colored sweatshirt that Romain bought me a while back, that I was hesitant to wear outside, but now have the perfect place to wear it; in my kitchen, standing in front of my juicer.

My orangey fingers didn’t bother me. Being a cook most of my life, I was used to things like stained fingers and bits of chocolate or butter on my face, or wherever. All those things are like badges of honor, like the scar I will forever have on my arm from reaching for a giant roll of aluminum foil atop a restaurant refrigerator, whose sharp, jagged edge landed me in the emergency room after my shift was over. 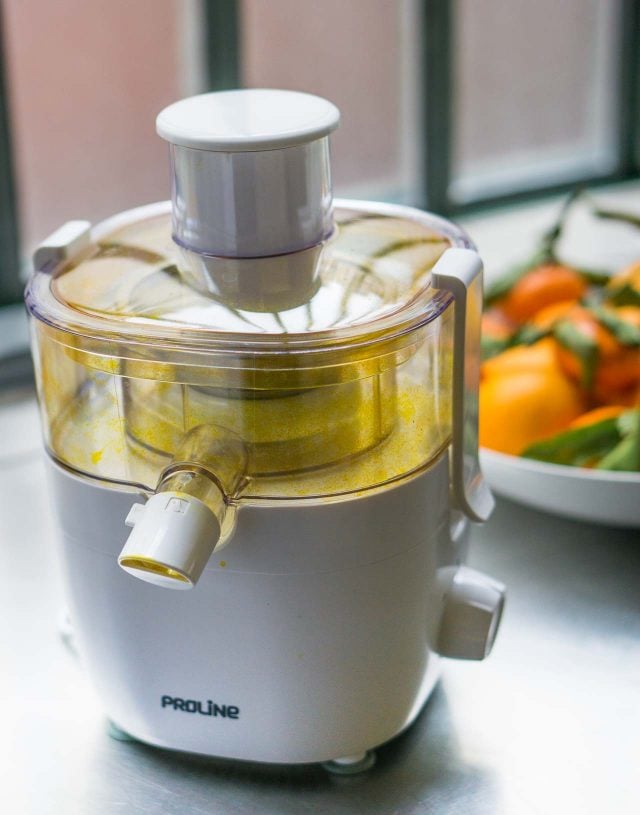 As someone on Instagram said, “Sorry, this is your life now.” And I say, “Thank God for stainless steel counters.” I had a whole kitchen done in stainless steel many years ago and I loved it. You could put anything on the counter, hot or cold, and it stood up to everything. And now, faced with turmeric, my current little stretch of inox in my kitchen has lived up to its “stainless” moniker.

However, I did learn not to wash the parts of the machine in the dishwasher after juicing turmeric. On the plus side, everything in my kitchen, from wooden-handled spatulas to measuring cups, has delightfully taken on the look of well-used, vintage French kitchenware. 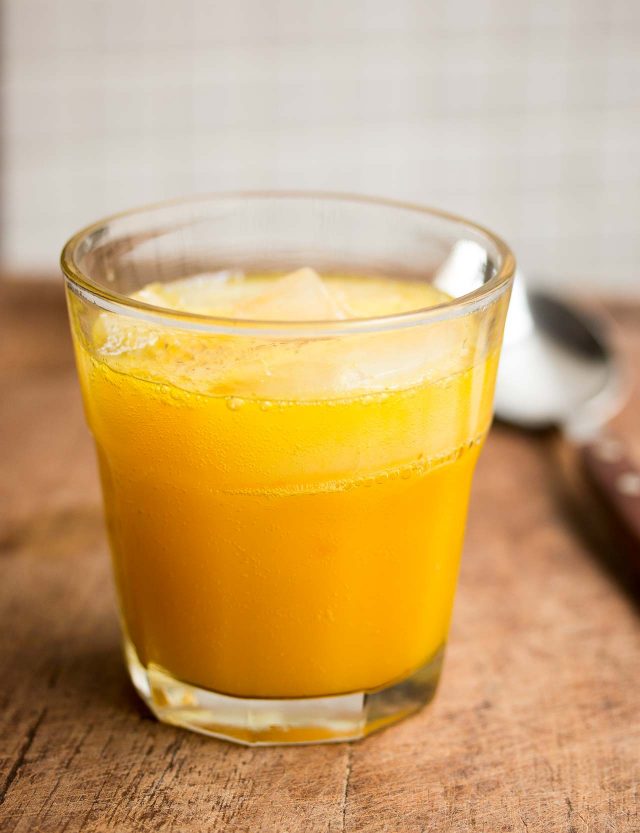 That’s a small price to pay for a glass of fresh juice maison (homemade), as well as having people back off when they see someone with orange-stained fingers reaching for the same bar on the métro as them. But I’m happy to be staying in the pink, as they say, or rather, in the orange. 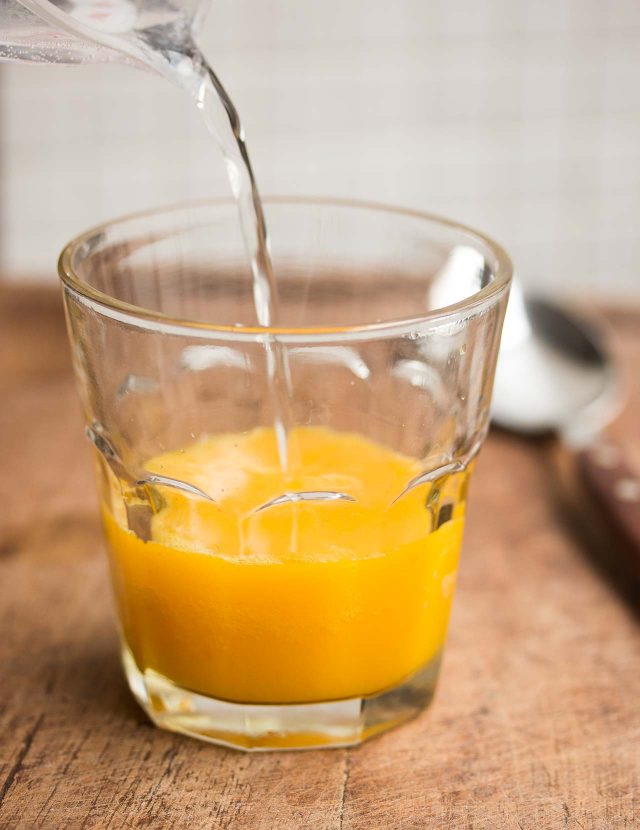 Inspired by recipes from Sqirl: Everything I Want to Eat and Alison Roman for Bon Appétit I find fresh turmeric root fairly easily in natural food stores, as well as in shops that specialize in Asian, Indian, and Sri Lankan foods. I've made this swapping out the maple syrup with rice syrup, honey, or agave nectar. Maple syrup integrates quickly into the lemon juice, but other liquid sweeteners may need to be slightly warmed. Black pepper, apparently, may help turmeric do the good things that it's supposed to do for you, so I like to grind some on top. (Plus it tastes good, too.) If you're sensitive about staining your hands or clothes, wear rubber gloves and an apron (and perhaps something orange) when juicing the turmeric. Someone on social media told me that Lysol Wipes remove turmeric stains on your hands. I haven't tried them, but if you have any tips or techniques for juicing turmeric, or making turmeric tonic, I'm definitely interested in reading them in the comments.
1/4 cup (60ml) freshly squeezed lemon juice
2 tablespoons maple syrup
2-inch (50g, 1 3/4oz) piece of fresh ginger, (no need to peel)
12 (65g, 2 1/4 oz) pieces fresh turmeric
freshly ground black pepper
sparkling water
1. In a small jar, shake together the lemon juice and maple syrup.
2. Put the jar under the spout of the juicer and juice the ginger and turmeric into the jar. Screw on the top, making sure it's firmly in place (so the juice doesn't fly out and stain your kitchen) and shake to incorporated all the ingredients.
3. Pour about 1 1/2 tablespoons of the turmeric juice mixture into a short glass. Fill halfway, or further, with sparkling water and stir. If desired, add a few ice cubes, then top with fresh black pepper. 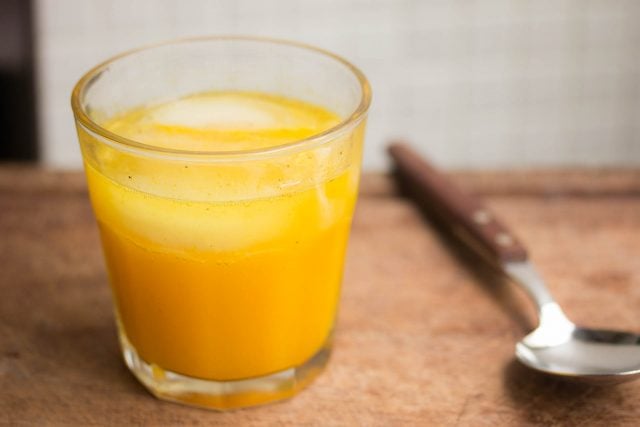 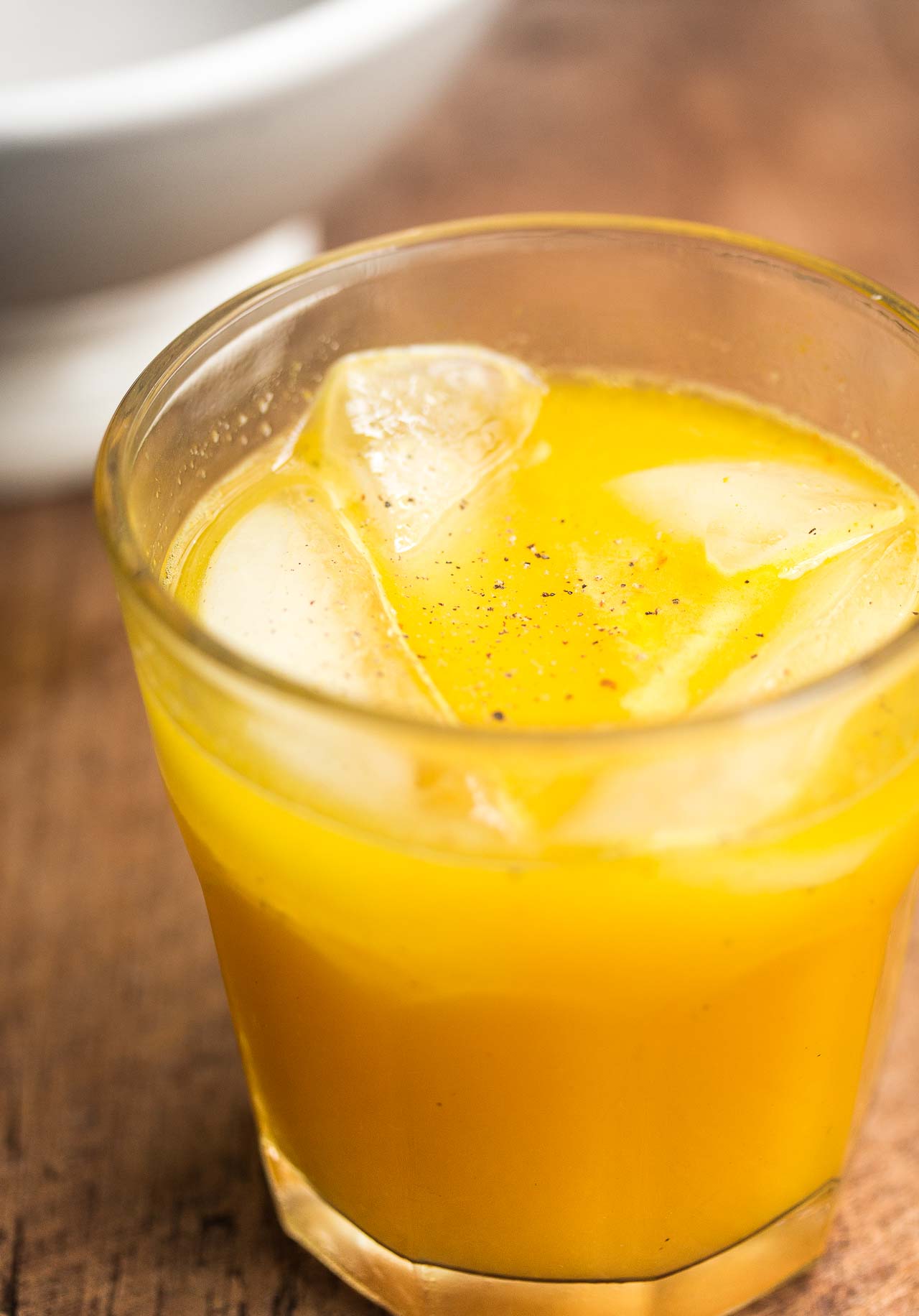