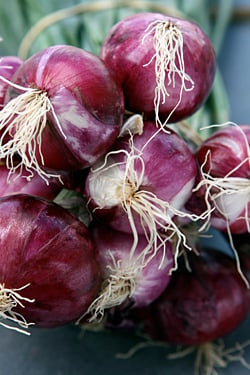 When I arrived in France a few years ago, I was a surprised to find that red onions are rare and cost nearly four-times the price of yellow onions. I reasoned that although French cuisine uses lots of onions, most often they’re cooked to enhance their sweetness, and they become an essential backdrop for braises, stews, and casseroles…and most-notably in French Onion Soup. So why use the red ones if they’re going to get lost?

The rose-colored onions of Roscoff, a small port village off the north coast of Brittany, which faces England, are considered a delicacy in France. Beginning back in 1828, French farmers would load up boats with these pink onions to sell them from their bicycles in England, where the farmers were affectionately dubbed “Johnnies” by the Brits.

This recipe comes from one of my favorite books, The Zuni Café Cookbook (which everyone should own). Like all of chef Judy Rodger’s recipes, this one is a winner. The onions are tangy and sweet, and keep their nice crunch. They’re perfect on hamburgers and Mexican food, as well as a nice condiment for any sandwich. It’s a few steps, but the pickles come out very well. If you want a simpler recipe, check out my recipe for pickled red onions. Adapted from The Zuni Café Cookbook by Judy Rodgers
1 pound (450g) red onions, peeled and cut into rings
1. Make a brine with 3 cups (.75l) white vinegar, 1½ cups (300g) of sugar, cinnamon stick, a few cloves, allspice berries and peppercorns. Add 2 bay leaves and a small dried chili, then bring it all to a boil in a 4-quart non-reactive saucepan.
2. Simmer the onion rings, in three separate batches (that means, one-third of the onion rings at a time), for 20 seconds each (20 seconds for each batch) in the brine. Remove onions to a baking sheet using a slotted spoon to drain them, and let cool.
3. Then you do it again, simmer the onions in three separate batches, for 20 seconds each. Drain them, and cool.
4. Then you do it again...simmer the onions in three separate batches (yes, have you memorized it yet?... 20 seconds each...then drain them and let them cool.)
5. Chill the brine thoroughly. Once chilled, add the onions and store in the refrigerator.
Related Recipes