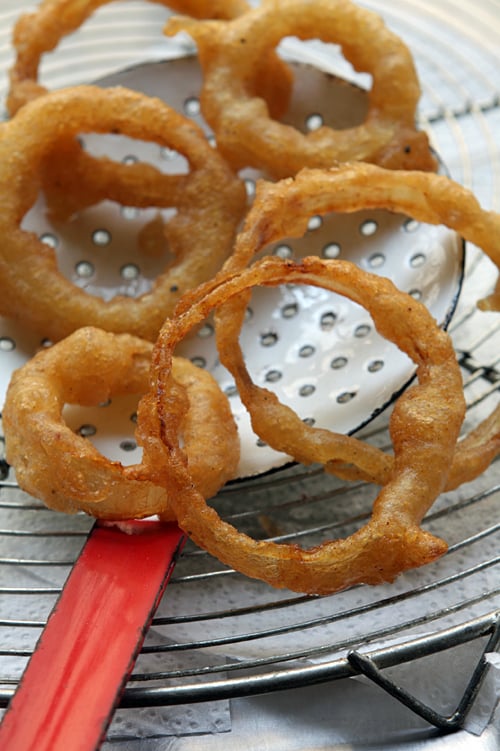 I continue to be amused by the debates about food, and who owns what. I think the Chinese might have something to say about noodles being Italian, a recent delivery of Montreal bagels prompted some followers to say that they were happy I have found the true bagel (I think a few Eastern Europeans might have something to say about that…) And coffee may have been perfected to a high art by the fine folks in Italy, but I think Africans and Arabs, who’ve had a long, rich history with the brew, were sipping the stuff before any of us. 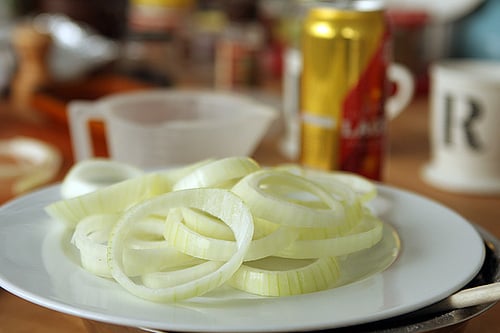 Few cultures truly “own” dishes that we think. But I’m gonna go out on a limb and say that I think onion rings were probably born (or at least bred, because I’m sure someone wiser than I knows otherwise) in America. Another thing that is pretty unique to America is Hooters. Well, except for the fact that they have Hooters around the world, including one I saw in Berlin, as well as in Vodičkova, Interlaken (in case you don’t believe me, check out the video), and even in 上海 – although for some reason, they haven’t made it to France.

Yet the French love onion rings, at least according to my one unrepresentative sample at home. And we go to New York, even though the translation doesn’t quite describe them quite accurately (oignons panés?) – the most Parisian of Parisians can’t resist the crunchy allure of crisp-fried onions, even if it’s served by a middle-aged American wearing pajama bottoms in his kitchen, rather than a buxom beauty strutting her stuff. 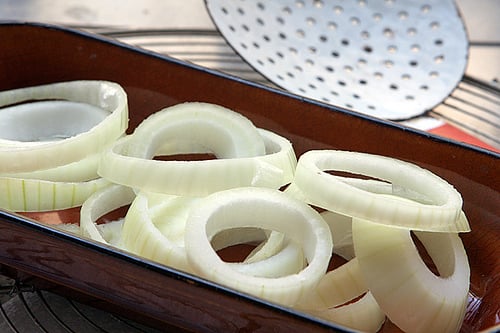 So what am I doing with The Hooters Cookbook? (Aptly subtitled, “Food, Fun, and Friends Never Go Out of Style) Well, I went to a holiday party and there was a White Elephant gift exchange, and when The Hooters Cookbook landed in someone else’s lap, it took all of my wits not to grab the shiny volume and make a run for it. Then I learned that the rule of the exchange includes a provision that you can take anyone else’s gift that you want when it’s your turn.

Because I didn’t want to be saddled with the reputation in France as “the guy that took The Hooters Cookbook from that poor woman at the Paris Christmas party”, I asked her if she was really all that attached to it. And I’ve never had anyone hand something over to me so fast, so I felt fine relieving her of this sure-to-be classic cookbook. And that was me, gleefully heading home on the métro afterward, clutching my Hooters cookbook, which people were eyeing with a bit of jealously. So I held it even tighter until I was safely off the train. 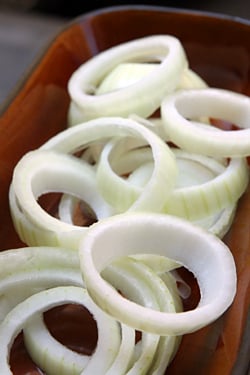 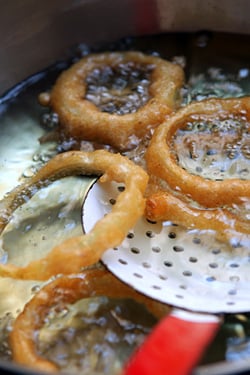 Much to my chagrin, I’ve never been to Hooters. I pleaded with friends to have my going away party there when I moved away from San Francisco. But I think they were still mad at me for making them go to Benihana with me one night, so we didn’t go. (In another instance of things where I just can’t win, some of my lesbian friends still aren’t talking to me because we didn’t go to Hooters.) But with this book now firmly in my possession, I can make “Don’t Be Crabby” Dip, Mama Sue’s Chili (although where am I going to find 2 packages of Chili Seasoning Mix?), Roasted Veggie Mishmash (*wince*), and Papricot Chicken at home if I want to.

There’s also a recipe for a 7-Layer Salad from Lynne Austin who is the original Hooters girl, who says it’s the perfect dish to take “to a PTA meeting.” But I think not a lot would get done by the men at that meeting – and maybe a few of the women – if she showed up dressed like she is in the book. Yet I have to hand it to her – she’s pretty smart because if she cooks dressed like some of the pictures I’ve seen of her, she didn’t have to worry about getting too many of her clothes dirty. (On the other hand, I would recommend being a little more modest when deep-frying.)

And for those of you didn’t know you could make your own iced tea, which never occurred to me until the book said that they were going to reveal a big secret to us readers – which was that, yes! – you could make your own iced tea…who knew? So I’m happy to have a recipe for that as well. Which is a good thing, ’cause I need to cool down from looking at Lynne. Er, I mean her well-stacked 7-Layer Salad. 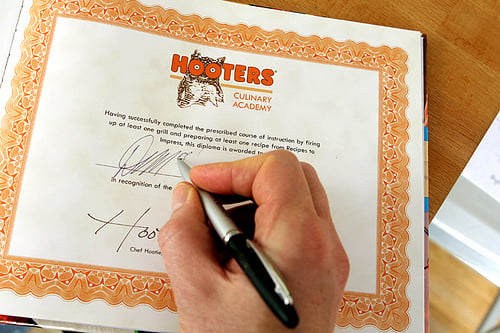 Unfortunately I didn’t have the six tea bags necessary to make ice tea. But I did have some onions and decided to tackle onion rings, which the recipe said would make my taste buds “do the wave.” I tried to translate that into French, which was a bit more of a challenge than I was ready to tackle, so I decided to let that one pass.

When I was done and all my onions had been dipped, fried and salted, I was thrilled to find in the back of the book, a certificate from “Chef Hootie, Dean of Man Food” which I signed. And what better way to celebrate my successful graduation? 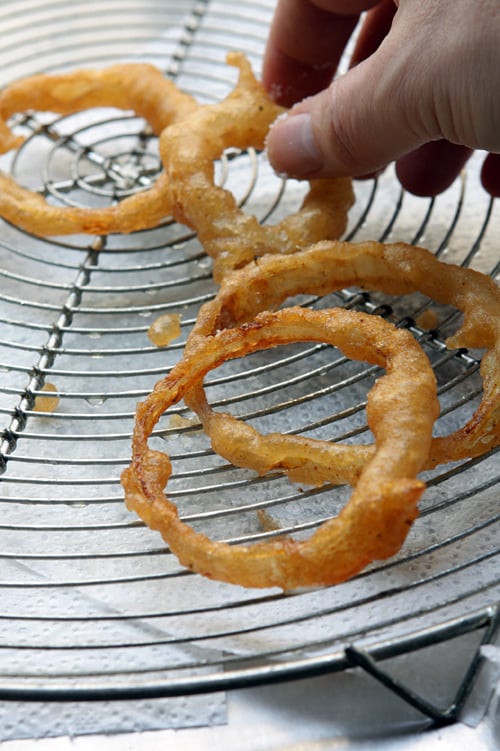 Inspired by The Hooters Cookbook (Arnica) I know they like things spicy at Hooters, and the recipe in the book called for a whopping 1 tablespoon of ground black pepper and 2 tablespoons of “your favorite hot sauce.” I ended up using the mix below, although it you want to give them a try, you can come up with your own spices and seasonings. Ideally you should use a sweet onion, such as Vidalia.
Servings 4 servings