I’ve been a tad remiss in doing a write-up about one of the newest American chocolate-makers: Askinosie. When I heard about them, I couldn’t wait to get my hands on some bars of their bars. The only problem was that I wolfed them down too-quickly, before I could even write ’em up. 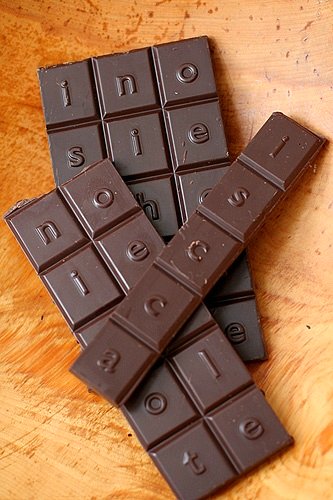 Then I’d heard in the news (the chocolate news, which I read rabidly…is there any kind of news?) that they’ve been making a white chocolate bar that’s made from non-deodorized cocoa butter and goat’s milk, instead of the traditional cows milk. As someone who likes white chocolate, and enjoys the tang of goat milk, this sounds like heaven to me.

In my 89 Random Things About Me, #3 was that I thought small-batch chocolate makers summed up all of the best qualities of America, most notably the eagerness to do something different and improve something, making it even better than before.

Shawn Askinoise was a criminal defense lawyer before turning chocolate-maker and he wasn’t the first, but is one of the few actively doing it. My tasting notes have vanished, but I remembered like it was yesterday how his Nibble bars riddled with almost too-many roasted cocoa nibs embedded deeply into the side, was my idea of a great chocolate bar.

Luckily I’ve got a little bag of their natural, single-origin cocoa powder that I’ve been saving for something special, and I don’t want it to become too good to use, and hopefully I’ll put it to good use soon.

In the meantime, I’m dreaming about that white chocolate. Oh yeah, and about the (Aski-) Noshie Bar; crunchy cocoa nib shortbread, homemade salted caramel, and enrobed in dark chocolate. Which would be anything but too good to use around here, I assure you.