When I moved to France from San Francisco, I worried about what every San Franciscan worries about— “What am I going to do without burritos?” 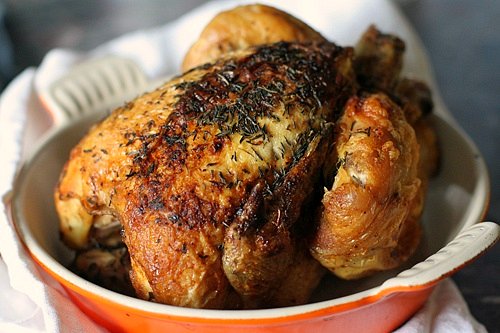 For those who aren’t familiar with San Francisco-style burritos, these bullet-shaped tummy-torpedoes are rice, beans, salsa, and meat all rolled up in a giant flour tortilla and eaten steaming hot. I don’t want to antagonize the burrito folks, but being a purist, I never, ever get cheese, sour cream, guacamole, or the worst offender—lettuce, all of which make a burrito about as appealing as a rolled-up newspaper left out for a week in the rain.

Burritos are cheap, filling, fast, and relatively healthy. (I don’t get the sour cream…remember? So I’m off the hook.) And here, I found my ‘burrito’ in the shape of le poulet rôti, spit-roasted chicken. Each Sunday as I’m winding up at the over-crowded market, I make my way over to Catherine, who has the best roast chickens at the Bastille market. Perhaps in all of Paris, although I haven’t sampled others, since I’m pretty loyal. Some of hers are nature while others are basted with soy-sesame or stuffed with olives and bread crumbs, or just rubbed with an overload of herbs. And she’s not shy with the salt, either. In short, a gal after my own heart.

I’m pretty partial to the poulet crapaudine, which has the added benefit of hyper-crispy skin. Don’t tell the health police…but if it doesn’t have high-fructose corn syrup in it, the assumption seems to be these days that it’s healthy. So there. Seriously, it’s one of the best things you can stick in your craw. But since I’m off to the beach next week on vacation and I’m desperate to get back to fighting weight, I went for the poulet au thym. I mean, how many calories are in a handful of thyme? (Please tell me zero.) I make two of three meals out of a roast chicken. Except the crapaudine, which is just one. Another reason I went sans crap today. 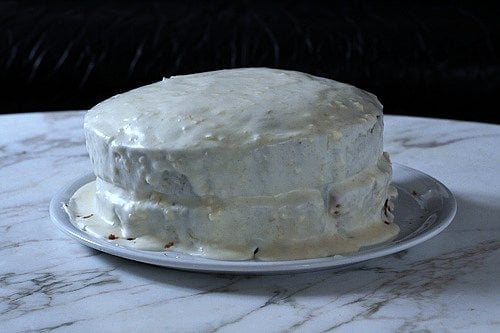 Fast forward to this morning. (Er—not too fast…please….) I woke up terribly bleary after trying to keep up last night with a 28-year old sommelier, which was a fitting end to a pretty tough week testing recipes around here. For some reason, my brain is roasted to a crisp, not unlike the poulet rôti and I’ve had a few catastrophes.

Living in a big city, I’ve developed an equally formidable skin. But I’m beat. Aside from making possibly the worst-looking cake of my career, I’m forgetting to add things to recipes, pretty important things like sugar and eggs, prompting me to have to re-make them all over again. One thing I love about Paris is that Sunday is a jour de repos, a day to relax. Stores are closed, and normally taut Parisians unwind a bit. Not too much, but enough to notice a discernible difference: like, someone inching up behind me at the market this morning actually acknowledged to the vendor that I was in front of him, and let me go.

Still, I shouldn’t be too hard on anyone else, especially when I’ve got a cake like that staring at me. I guess I was hoping that when I woke up, the nightmare of a beast would be gone. Yet today it’s still here, and for the time being, so am I.

But not for long…