When I moved away from San Francisco, my biggest worry wasn’t having to learn an entirely new language. Nor was I concerned about the challenges certain to be encountered adapting to a foreign culture.

No. My greatest concern was—What was I going to do without burritos?

If you’re not from San Francisco, you probably have little idea how important to life a burrito is. Yes, you can now find burritos in Mexican restaurant chains in the US. Although curiously, I’ve only rarely seen them actually in Mexico. We San Franciscans, though, wear our burritos like a log-shaped, foil-wrapped bulging badge of pride. 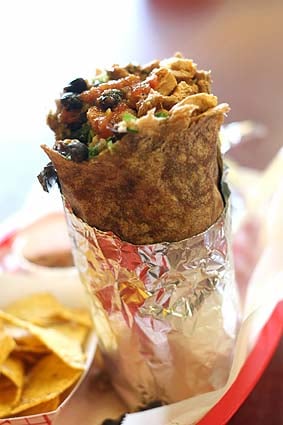 The burrito, aka the tummy-torpedo, is the perfect meal; meat, rice, salsa and beans all wrapped up in a big floppy flour tortilla. Of course, folks like to have everything from cheese, sour cream and even lettuce (ick!) added. But get a clue, folks, can someone please explain to me the appeal hot, soggy, wilted lettuce? Keep the meat and carbs, but ditch the green stuff.

So back to the burrito.
Basically, it’s a meal-in-a-tube, inexpensive and reasonably healthy, especially if you opt for it like I do, unencumbered by all the extras people toss in there. I just like nice warm chunks of pollo asado, grilled chicken, a spoonful of black beans, some rice, and smoked chili sauce. I skip the salsa in most places, since unripe tomatoes have the same appeal to me as a pile of soggy lettuce. Instead, where I go, they add a flurry of lively chopped cilantro and minced raw onions. And being California, they have a choice of tortillas, from spinach to whole wheat, of which I am guilty of ordering. But hey, no one said I had to be a total purist. I’m sure the Aztecs didn’t have refined flour and ate their burritos with whole wheat flour as well.
So there.

Each and every San Franciscan has their own favorite burrito place. Some swear by La Taqueria, the darling of the critics. Others like the steak burrito at La Cumbre. My favorite place is….arrrgh I forgot the name! Still jet-lagged I guess. But for an inexact address, it’s the place on Church Street, right across from the Afeway.

(Which is actually Safeway, but the ‘S’ was dark for so many years, to me, it’s always going to be the Afeway.)

My concern when I moved to Paris was what would I eat for lunch every day? What would replace my precious burrito?

At first I found solace in the falafel sandwiches on the rue de Rosiers. A fabulous round of pita, split open, and stuffed with deep-fried falafels, spicy, red-hot harissa, cucumbers, grilled eggplant and creamy yogurt tahini sauce. But then I found something just as good, if not better: Le poulet rôti, spit-roasted chicken.

At every outdoor market in Paris there’s at least one volaillier who has a constantly turning rôtisserie with long metal bars slowing spinning chickens until they’re bronzed…no, make that very well-bronzed, and unbelievably moist and succulent. If you can find ’em, the poulet Portuguese are my absolute favorite, often called poulet crapaudine, a chicken that’s been split open, rubbed with lots of spices, raw garlic and more salt than one might think prudent. Then each bird is grilled until the skin is practically rock-hard and crackly-caramelized, which you pull off and enjoy in lick-smacking, crispy, salty bits.

My favorite roast chicken in Paris is available only on Sunday at the Richard Lenoir market. (And please don’t tell me you want an address for that too…) At the upper end of the market is a woman, which is as close to an address as you’re gonna get, is my pal, the woman who I call la Reine de Poulet, or the chicken queen, which is actually a title her daughter bestowed upon her which she carved on her old wooden cash box.

Wearing oversized glasses, short bobbed hair, and cackling like a mother hen, she shrieks out to all passers-by when the chickens are available; hot and ready-to-go. There’s always one waiting for me, just slid off the hot metal spit and wrapped in a crisp waxed paper bag. There’s all sorts of roast chickens available available, but I prefer the crapaudine. If you’re one of those people that likes juicy, moist chicken, this ain’t the chicken for you. But for some of us, this is chicken candy. And I missed mine this week.

So if you happen to be in Paris, please stop by and say hi to her. I miss her and her chickens, even though I’m basking in burrito paradise here in San Francisco.

But I doubt there’s a burrito queen here in San Francisco.

So for this week, I’m declaring myself the king.