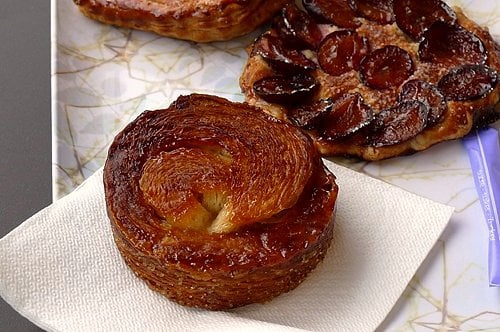 I’m not going to say a thing, because I’m certain I did the same thing back in the day. But a lot of people who are en route to Paris ask me where they can find things like bouillabaisse, a true salade Niçoise, or Kig ha farz, and when I answer, “You can’t”, they either don’t believe me, or get irked because they think I’m being elusive and keeping those addresses a secret and probably say mean things about me behind my back.

To get those things, you need to go where they originate; they just don’t travel outside their particular region in France. I’m not sure if it’s because in America, we’re used to things being available whenever and wherever we want. Or because of our “melting pot” status, we readily accept foods from other parts of the country and the world with a little more fluidity than they do elsewhere.

But I’ve been duped one too many times in places like New York City, that advertise “San Francisco-style” burritos, which are about as close to the original as most of the rice-plumped salades Niçoises you’ll find on the Île-de-France are.

(The true salade Niçoise should only contain raw vegetables: cooked eggs are allowed, and in some cases, canned tuna or anchovies. But that’s it, folks. And don’t get me started on those New York City burritos…and I use the term “burrito” loosely. If you cut it in half and can see any air pockets, it’s not a burrito.)

I’ve learned my lesson and will stick to Black & White cookies, corned beef sandwiches, and the Halal stand in Manhattan.

And I’m staying away from the barbecue sticklers, but let’s just say that if you want to get Texas or Kansas City BBQ, people who live in those place would likely not recommend addresses elsewhere. So I think this regional-centricism holds partially true in the land of the free and the brave—albeit uninsured—as well. 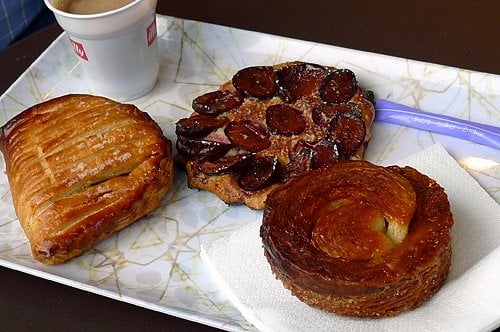 Often I’m asked by folks coming to Paris where they could find a good Kouign amann, the Breton pastry made by folding an overload of butter and sugar between sheets of puff pastry, then baking it until the whole things caramelizes into one bronzed, buttery disk. I suppose I brought it upon myself for bringing it up in the first place, since it’s not well-known elsewhere. But when you bite into a good one, it should shatter into a gazillion buttery-wisps that stick to your lips, flutter and flit around, leaving evidence all over your shirt and jacket. And while I’d seen decent versions of them in Paris, and have heard rumors of vendors from Brittany sneaking them into some of the outdoor markets in Paris, I’d not seen one that I would recommend with certainty—until I saw this one at Blé Sucré bakery.

I’ve been to Brittany numerous times and had plenty of Kouign amann, which means “Butter Cake” in Breton. But since they’re not Parisian (like me), they’re either too-fancy, or too restrained (unlike me) with the butter and caramel, which leaves me craving the real thing even more. But this one, this impeccably-slick disk was practically talking to me from the shelf at the shop. I kid you not. I was taping a television segment there and I could barely wait for the camera to stop before I could swoop down on one.

And if they play back the tape and hear a little voice, in French (or Breton) saying, “Daveed…mangez-moi!“…or however they say it in Breton…then you’ll know I wasn’t imagining it and you can stop laughing at me. 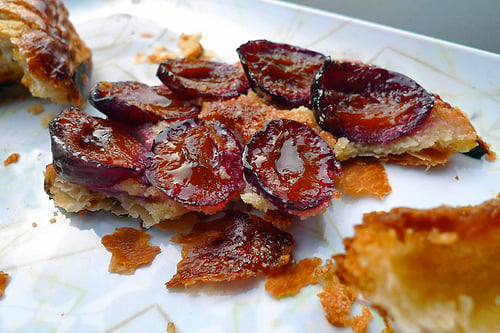 One thing I’m sure I wasn’t imagining was this flaky tarte aux quetsches, made with the last-of-the-season prune plums, fused to the laminated layers of buttery pastry underneath. Like the Kouign amann, and everything else at Blé Sucré, it’s nothing to snicker at. But the jury’s still out on me.

(As of 2018, there are new owners of Blé Sucré. They’ve said they will keep many of the items the previous owner offered, but items available at the bakery are subject the change.)

Allegedly The Birthplace of Kouign Amann