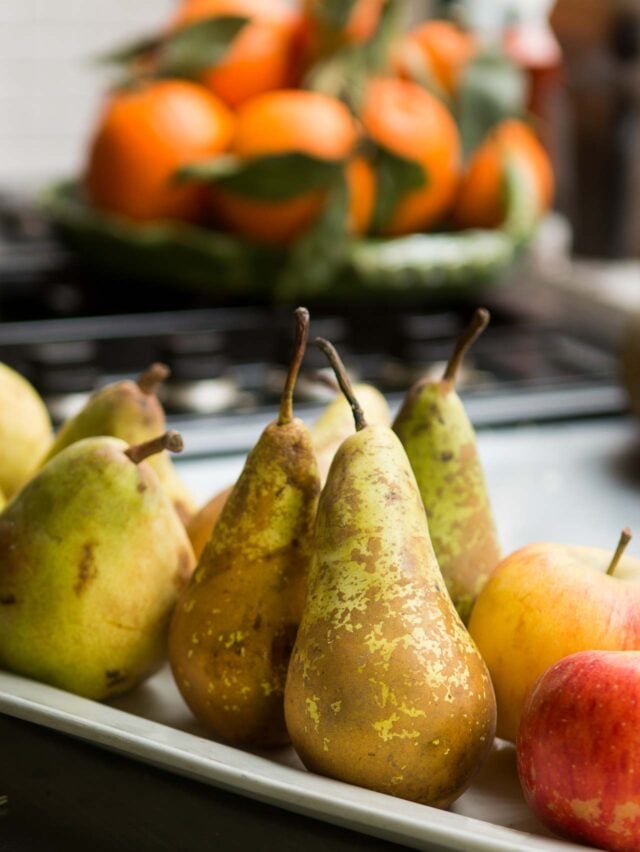 Every year I spend an inordinate amount of my time poaching fruit. It’s usually because I’m powerless to resist all the pears in baskets at my market, and buy far more than I need. Yes, much of my sweet bounty finds its way into sorbets, cakes, ice creams, and jams. But one of my favorite ways to keep those pears around a little longer is to poach them. 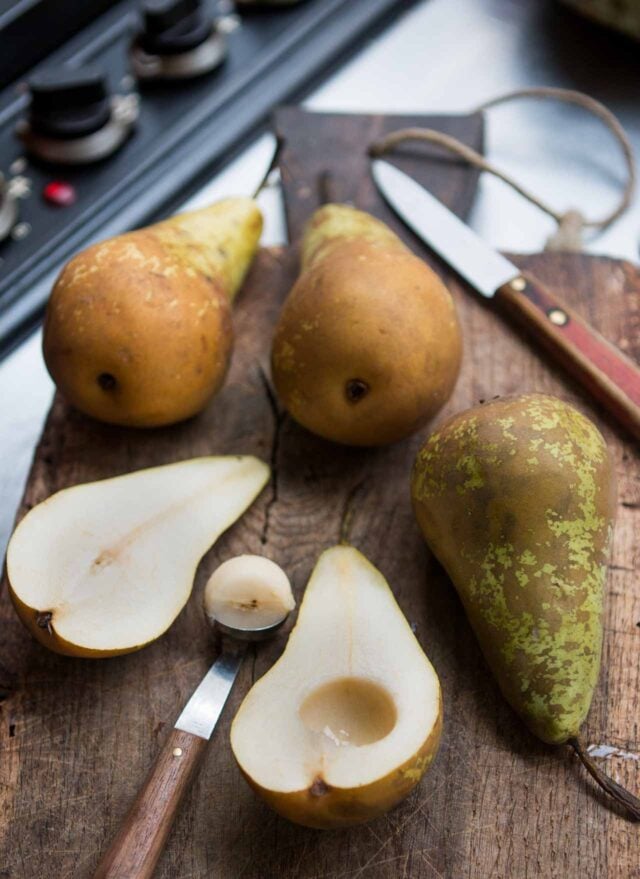 Poaching is gentle, stove-top cooking, and winter pears are ideal candidates since they keep their shape. Poaching also improves the taste of ho-hum pears. That’s especially good news for you do-ahead folks out there; the longer the pears sit in the flavorful syrup after poaching, the better they’ll taste. Since there isn’t a big variety of fruit tumbling my way in the winter, to get my fruit fix, I’ll keep some poached pears in the refrigerator and enjoy them diced and mixed with my mid-morning yogurt and granola. 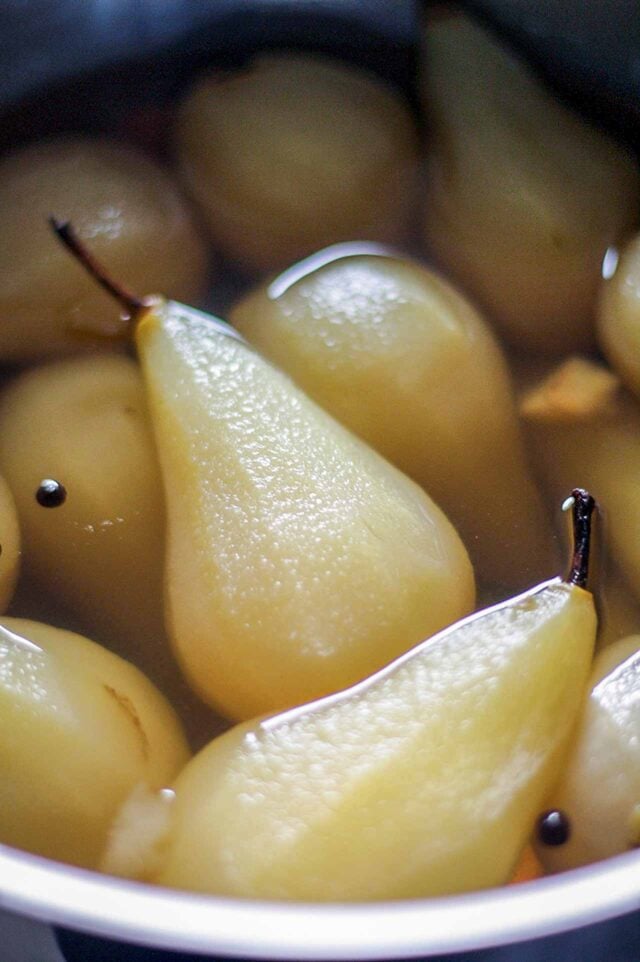 Be sure to start with firm, ripe pears.

My choice are Bosc pears, similar to Conference pears, which I use in France. Tiny Seckel pears, if you can get them, are lovely poached whole or in halves, with the cores scooped out. And bulbous Winter Nellis work very well, too, as will Anjou pears, although I find their flavor somewhat muted. Softer pears like Comice or Bartlett, while tasty, will fall apart during poaching, so they’ll have to go stand in the corner. 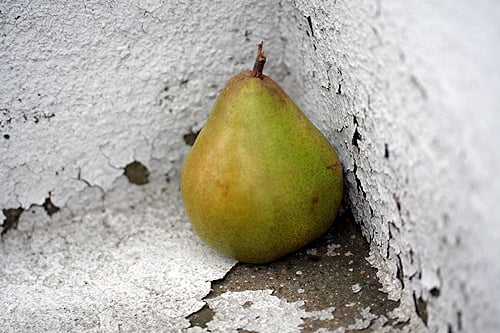 You can customize the poaching liquid to suit your taste, adding various spices, slices of fresh ginger, vanilla beans, or wine to the mix. And I also change sweeteners, swapping out honey for sugar. Just be sure to keep it relatively simple. It’s nice to make things lively, but too many flavors can spoil the broth. Once the pears are poached, I’ll often add a handful of dried fruits, such as sour cherries, cranberries, raisins, or currant to the still-hot liquid, and the heat will plump them up nicely. 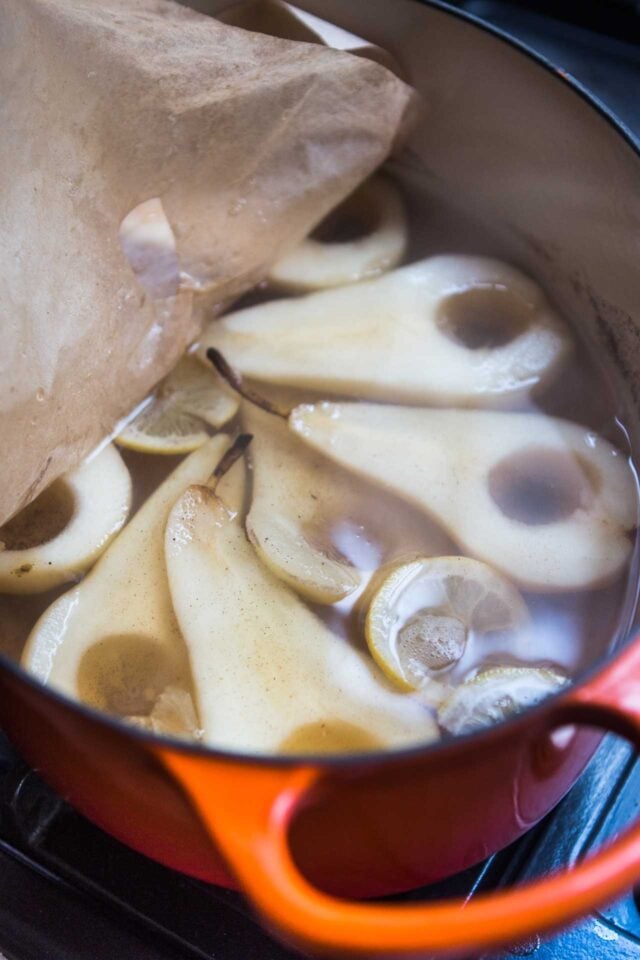 Poaching pears couldn’t be easier, but during cooking, the one thing you want to watch out for is the pears either poking out of the water or not cooking them enough. Either will cause the pears to discolor. You want to make sure they cook evenly, and to remain submerged in liquid. To prevent this, I craft a circle of parchment paper to fit over the top of the pears while they’re cooking with a vent hole in the middle to let the steam escape. 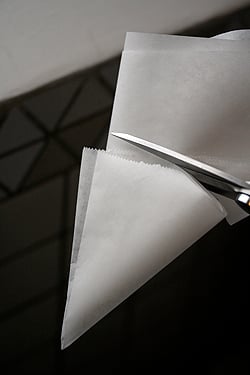 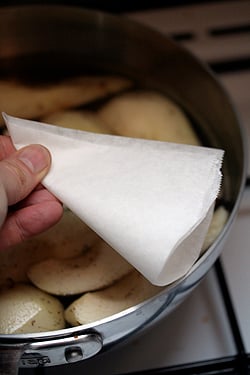 Simply take a large circle or square of parchment paper and fold it into a triangle. Hold the point hovering over the center of the pan you’re using, then use your scissors to trim away the excess paper, so it’ll fit snugly over the fruit. Then cut a hole in the center, which will allow some of the steam to escape and help the liquid reduce a bit. Drape the paper over the pears while they’re cooking, pressing down every so often while they simmer, to make sure the liquid or vapor is covering them. 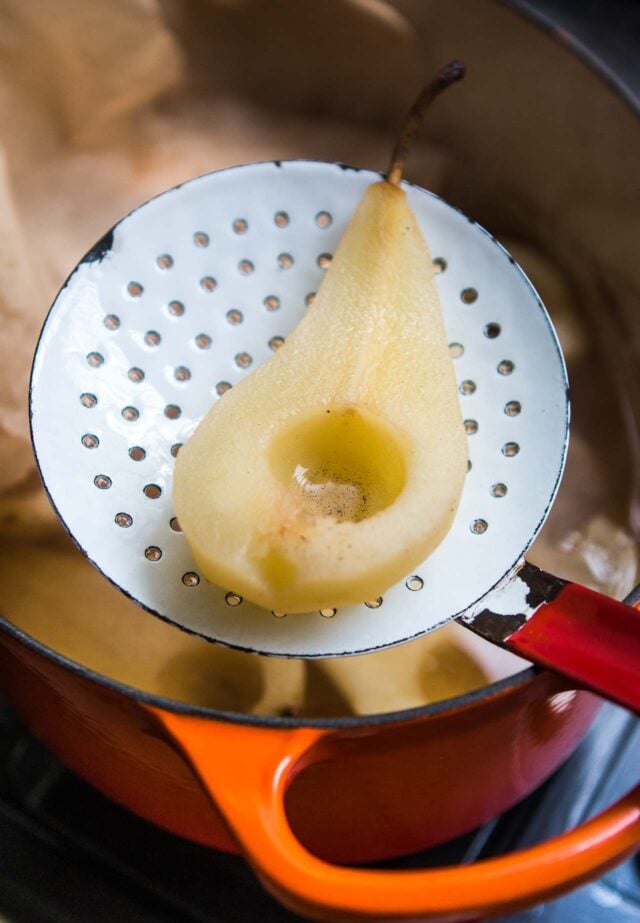 If you’d like, after poaching the pears, you can reduce the liquid until it becomes a thick syrup and pour it over the pears before serving. To do that, remove the pears with a slotted spoon and strain out any spices or seasonings, then cook the liquid over medium-high heat until it’s reduced by about half. If I’m serving the pears by themselves, or alongside a cake, I’ll do that to make a richer, thicker, more flavorful sauce.

You can also poach the pears in halves (cored) or whole. Note that the poaching time will be longer if the pears are in halves or whole, rather than quarters. The best way to test if the pears are done is by poking one with a paring knife; if it meets no resistance, it’s done. Depending on the pear - and if it's whole, halved, or quartered - the pears can cook in as little as 10 minutes, but if whole, expect them to take longer. I’ve offered a few variations at the end of the recipe for changing the seasonings or poaching liquid. You can serve these pears alongside a favorite cake, like the Chocolate pain d’épices, from The Sweet Life in Paris, or even a slice of traditional Pain d’épices. Of course, they go very well with gingerbread, and I’ve even swapped them out for the quinces in Quince tarte Tatin. And don't forget Poires belle Hélène, a classic French dessert of poached pears with vanilla ice cream, warm chocolate sauce, topped with a few sliced, toasted almonds

Options: After poaching the pears, while the liquid is still warm, add approximately 1/2 cup (120 g) dried sour cherries, cranberries, raisins, or dried currants and let them plump. Serving Serve the pears warm or at room temperature. Accompany with perhaps a scoop of Vanilla ice cream and some dark chocolate sauce, a spoonful of crème fraîche, Milk chocolate & black pepper ice cream, fresh raspberries, or alongside a wedge of spice cake or gingerbread. Storage Store the pears in their liquid in the refrigerator, in a covered container, until ready to use. Remove the pears from the refrigerator a few hours prior to serving and re-warm them gently in the liquid, if you wish. The pears will keep for up to 5 days. The pears do improve in flavor after a day or so in the poaching liquid. Variations In place of the water, you can replace the water with 2 cups (500 ml) water and 2 cups (500 ml) white wine (sweet or dry), or 3 cups (750 ml) red wine and 1 cup (250 ml) water.