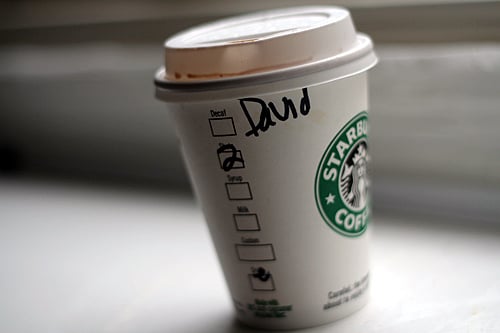 After a couple of too-lengthy flights, I finally landed in San Francisco. I arrived with a full agenda of things to do, and fortunately got all the not-so-fun stuff completely out of the way by the end of Day #2.

So now I have nothing to do for a whole week here—except eat! 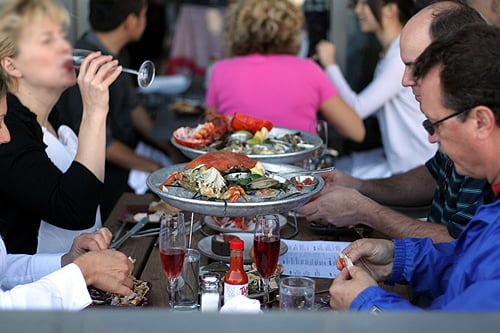 You’d never know I wasn’t in Paris anymore by the platter of fruits de mer served up at the Ferry Plaza Farmer’s Market. Except, of course, for the bottles of hot sauce on the tables, which I guess people squirt over their squiggly bivalves. It’s not my thing, but since in my absence, America has become a land of mavericks, I kept my trap shut.

I roamed the market, admiring all the absolutely gorgeous and unusual produce, like frosty-looking pluots and Kadota figs. When I was a baker here, I nicknamed them Carol Kadota’s, after one of San Francisco’s most colorful characters, Carol Doda. And I couldn’t resist copping a feel of the dewy little orbs.

The samples at the market are free and abundant, which surprised me a bit, since in my absence, I also noticed an overabundance of products to sanitize everything from grocery cart handles to detoxing your baby’s feet. 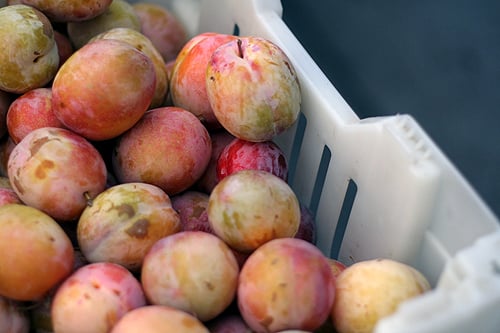 Deciding where to eat proved the biggest challenge. Although I wandered through Mijita, and even though my pal Lisa was blending up some awfully good-looking margarita’s behind the counter, after wolfing down three burritos in the past two days (don’t ask me how I did it…), we decided to hit Taylor’s Automatic Refresher, and put in our order for two burgers, I asked for mine without sauce, thank you very much. I have a major dislike for those mayo-based burger sauces that Californians like on their burgers, something that seriously shocked me when I moved here in 1983. Yuck! I mean, who really wants to spread a thick, viscous emulsion of egg yolks and oil on a nice, crusty patty of char-broiled beef? I’ll take a pass. 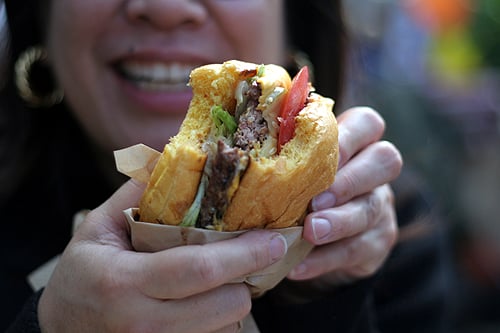 But being in America doesn’t guarantee a good burger and maybe the Californians know better than me and need that sauce: my hamburger could’ve used something to moisten ‘er up. 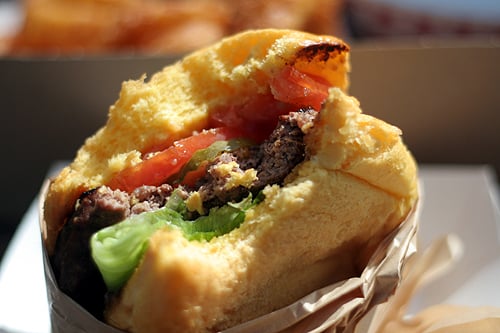 And what is up with those yellow, egg-based buns?

Honestly. I’m heading to Joe’s Cable Car Restaurant once this week (at least…), since I’ve almost had my fill of burritos. Although the carnitas burrito at Pancho Villa Taqueria almost made me want to cry it was so good. Having a icy horchato and a big basket of just-fried chips didn’t hurt those salty tears from welling up my eyes, either. 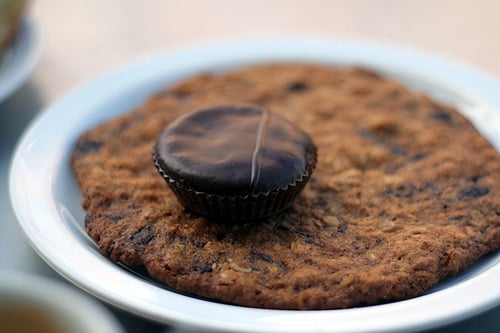 As any highly-intelligent person knows, the most important part of any meal is the dessert.

Heading over the Tartine to meet a friend, the line snaked out the door, and the not-in-a-hurry young man behind the counter wasn’t doing much to keep it moving along. Considering I live in the land where people aren’t known for their speed or their efficiency, with the slippery dollar and the economy teetering on borrowing even more money to keep things afloat, (…um…if you can’t pay your credit card bills, I don’t know if it’s such a great idea to borrow more money to pay them off. But what do I know? I’m just a cookie-baker, and not much of a maverick…) I found myself pining for the fast-moving women at my local bakery, who take care of the long lines with rapid-fire efficiency. I’m normally out the door and ripping the end off of my baguette less than a minute after I join the end of the line that’s poking out the door as well.

Although I lost count of exactly how many minutes later, I eventually walked away with a jumbo, wafer-thin chocolate chip cookie and a moist, chocolate Friand, a round mouthful of ganache-covered cake, a perfect little bite of chocolate. The double espresso was good, too. 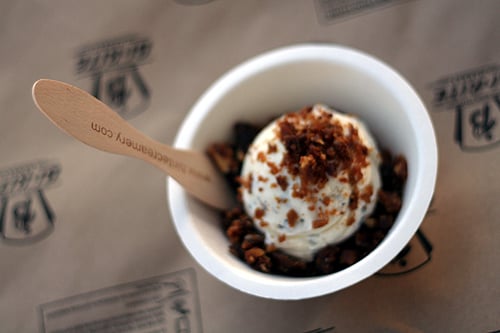 Unfortunately as I went to focus my lens, the whole outer ring decided it had had enough of my manhandling and my shots started getting fuzzier and fuzzier as the ring loosened and slipped around, ignoring my pleas to keep things in focus. I learned this week that not keeping things in focus is another sign of a being a maverick, so I guess I shouldn’t complain, and just shrug it off with a wink and a smile.

With my only lens limping along on it’s last legs, I headed across the street to Bi-Rite Creamery, where I met up with some of you, who’d braved parking in the worse neighborhood in the city just to come and say hi to me.

And I’m sure the free scoop of ice cream everyone got who stopped by had nothing to do with it, either ; )