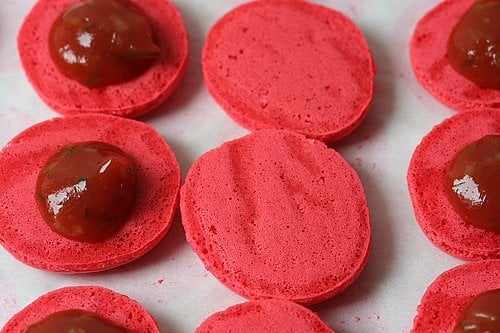 When you make desserts in a restaurant, the most important thing you can do is to smell anything made of plastic before you put anything in it. I remember someone made a big batch of crème anglaise one morning…and that evening, when I went to serve it, I opened the lid and the overpowering smell of garlic blasted forth, rendering the whole batch useless.

A few years Iater I worked as a pastry chef at a southeast Asian restaurant, which was great: I never had to sniff anything since I was using the same ingredients—ginger, chiles, galengal, and spices—as the regular cooks. 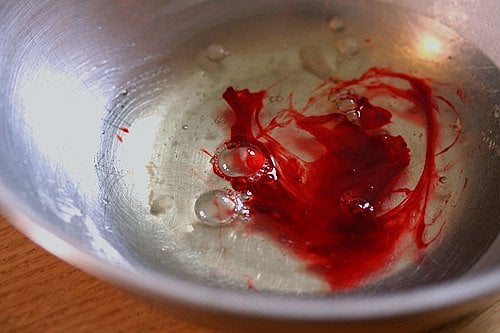 I’ve raved and raved about Pierre Hermé’s macarons, and once ranted about one.

It’s not the I’m not open to experimentation, but the idea just sounded too odd to me and I couldn’t eat it. I did, though, love the reader that accused me of contributing to all the “…bad press foie gras has in the US”.

Oddly, if I take the time and respond to explain that yes, I do eat foie gras, I never hear from them again. I guess I should be thankful, but I do hear from a lot of people who are endlessly fascinated by French macarons. Thankfully the great Pierre Hermé has finally come out with a book that exhaustively covers the subject with 200 pages of recipes and full-color photographs. 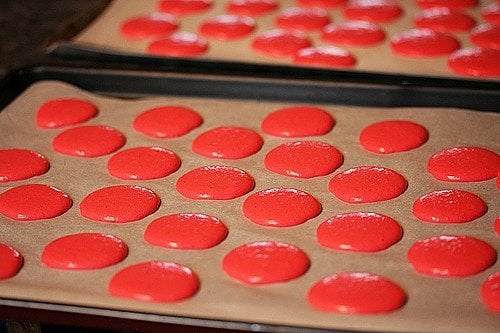 Because making macarons is mostly about technique, rather than just a standard recipe, readers will appreciate the 32-step instructions, with photos, that show the process exactly as it goes.

There’s les classiques, like dark chocolate, praline, coffee, and pistachio, but other chapters feature the more unusual macarons that Hermé is justly famous for. Ispahan is one, with litchi, rose and raspberry, Arabesque with apricot and pistachio, as well as a bright-green macaron filled with fresh mint. But what intrigued me the most, and made me pick up the book, was his recipe for macarons with ketchup. 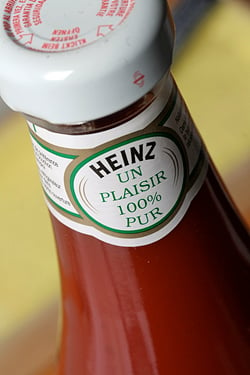 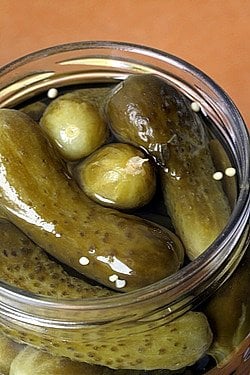 If you think that sounds odd, if you think about it, tomatoes are a fruit and ketchup is really a spiced and sweetened paste made from them. There’s a perception in Europe that Americans put ketchup on anything. Aside from the rather-full shelf of ketchup I’ve seen in French supermarkets, we’re not the only ones that use it. But I’m not sure where that impression comes from as I rarely use it.

I’ve had a couple of Europeans say to me, with a smirk; “Aren’t you going to put ketchup on everything?” One time, it was actually a dinner guest in my home. (Make that ex-dinner guest.) I suppose it’s the same as the idea that we think that all Frenchmen wear thongs on the beach, which I’ve tried to explain to Romain was something we associated with Europeans, especially the hefty male ones with lots of gold jewelery, comb overs, and extra-long, thin cigarettes, but he didn’t get it. So I let it drop. 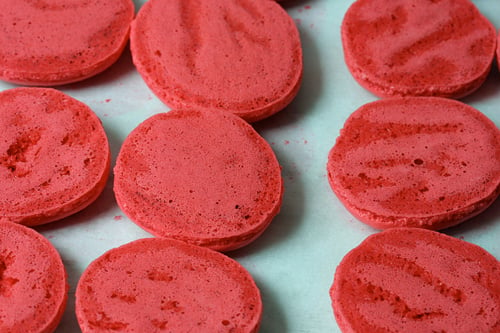 So why not ketchup macarons? Clichés don’t get picked out of nowhere, and I may as well embrace my American kinship with ketchup. For kicks, there’s a bit of Tabasco sauce and tiny cubes of cornichons added. It was an idea that so intrigued me, I wanted to give it a try. One thing I didn’t count on was that the recipe, which I cut in half, called for a full bottle of Heinz ketchup. (The original recipe called for a whopping 3 1/2 cups of ketchup.) Well, if nothing else, this recipe was reinforcing the notion that we Americans really know how to pour on the ketchup. 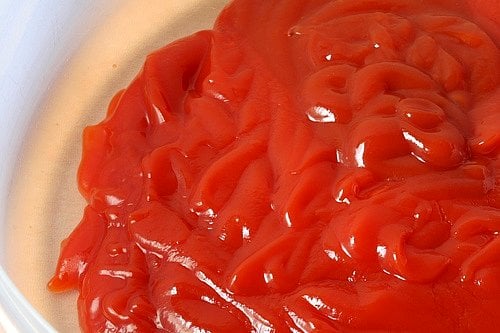 For some reason the recipes in this book each make 72 cookies. I can imagine wanting that many chocolate or coffee macarons, but I cut the recipe in half for the ketchup ones, as something told me that I didn’t think these would be as popular.

Pierre Hermé recommends using Heinz ketchup because he warns of the “enormous variation” between brands. I did taste it side-by-side with store-brand, to bolster my reputation as an international expert on ketchup, and the Heinz was slightly spicier and more lively. 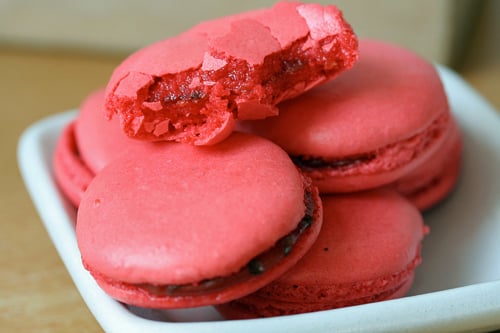 I should say that anyone interested in making French macarons would find Macarons by Pierre Hermé the best resource I’ve seen in print. And it’s now available in English.

But as they say in France, this book is le must.

Adapted from Macarons by Pierre Hermé Pierre Hermé uses what he calls “liquidifed” egg whites, which are egg whites that have been placed in a bowl, covered with a piece of plastic wrap with a knife slit hole on the top, and left in the refrigerator for a week prior to using. I did end up using more food coloring that the recipe (much more than I thought prudent.) The photo in the book showed them as being rather red, but perhaps the colorant they used was professional-grade and I was using McCormick. I got a little scared after I added more than half the bottle, and decided to stop. Note: When I originally reviewed the book and made the recipe, the book was only available in French. So some of the notes I provided were due to translation issues and terms. If you want to try the recipe, you can use Google as a conversion calculator by simply typing in a phrase such as “150 grams in ounces” and it will convert for you.
For the almond mixture:
150g powdered almonds
150g powdered sugar
55g egg whites
15g red food coloring
For the meringue:
150g granulated sugar
40g water
55g egg whites
For the filling:
40g cornichons
6g sheet gelatin
350g Heinz ketchup
4-5 drops hot sauce, I used Sriracha
For the Macarons
1. Sift together the powdered almonds with powdered sugar. Add the 55g egg whites and food coloring, but do not stir them together.
2. In a saucepan fitted with a candy thermometer, cook the granulated sugar and water to 115C. In the bowl of an electric mixer, begin whipping the whites until they form soft peaks. Once the syrup is 118C, pour the syrup over the remaining 55g egg whites while they’re whipping.
3. Continue to whip the whites until the temperature drops to 50C.
4. Remove the bowl from the mixer and fold in the powdered almond mixture.
5. Using a pastry bag with a plain tip, pipe 3.5cm rounds onto parchment-lined baking sheets. Once piped, let the rounds sit for 30 minutes to develop a crust.
6. Heat the oven the 180C.
7. Bake the macarons for 12 minutes, during which time rapidly open the door twice.
(I’m not certain why he does this step, or exactly when. The instructions said to Laissez cuire 12mn en ouvrant rapidement 2 fois la porte du four, which seemed to me to be right before they’re done.)
8. Remove from oven and let cool. Once cool, remove from baking sheet. Then make the filling.
For the Filling
1. Rinse and pat the cornichons dry very with a paper towel. Dice cornichons into miniscule cubes (1mm).
2. Soak the gelatin in cold water for 15 minutes.
3. Remove the gelatin and melt it in a saucepan or microwave over lower heat, just until melted. Mix in one-quarter of the ketchup, the add rest. Stir in the cornichons and a few drops of hot sauce, to taste.
4. Pipe filling between two halves of macarons and sandwich them together. Chill for an hour, until the filling is set.

Storage: Macarons should be stored in the refrigerator, where they can sit for up to two days. Remove from refrigerator two hours before serving.

Oh yeah, before I split. You’re probably wondering what I thought of them.

Truthfully, after I put them together and let them sit, I wasn’t sure if I wanted to take a bite. They were pretty and all, but I’m not really a fan of ketchup (yikes!) and the idea did sound a bit odd to me, even though I’m sure all of you out there are thinking that it’s perfectly normal.

The taste wasn’t bad and I could imagine these as a savory-sweet hors d’œuvre, rather than for dessert—which I think is what they’re intended for. I don’t think I’ll make them again, but I will certainly be trying some of the other recipes. 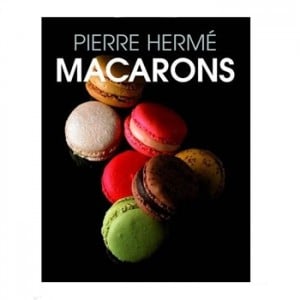 Note: Since this isn’t my recipe I can’t answer specific questions about his techniques but most of them are explained in the book very well. If you have questions about macaron making, please check my post Making French Macarons for trouble-shooting and tips.

My review of the book: I Love Macarons!