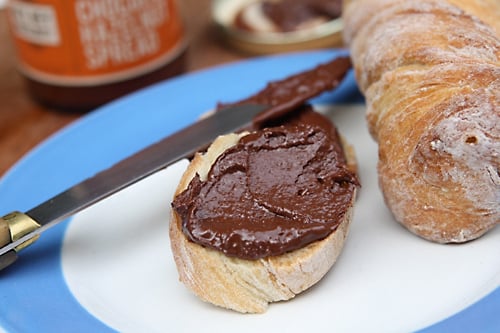 No one was happier than I was to receive the news, directly from the chocolate-maker himself, that Askinosie was jarring up a chocolate and hazelnut spread. To make the spread, cocoa powder is made from pulverized cocoa beans sourced directly from the farmers in the Philippines, and hazelnut butter is made from nuts harvested from an orchard in the Pacific Northwest. Then they’re both ground together with a modest amount of sugar and a few cocoa beans tossed in the mix.

I don’t have any problems with Nutella, but I know some people are concerned about exactly what’s in that too easily-reachable oval jar. I don’t regularly buy it, but have been known to dip my knife into a jar every now and then myself, and wonder what quantities people are eating it in that makes it problematic? I suppose if I was plowing through a jar a week, I’d be more concerned. But for an “occasional user” like myself, I’ve got bigger fish to fry. Still, I was happy to hear that there was a chocolate-hazelnut spread made with ingredients sourced direct from their origins, created by a pioneering American bean-to-bar chocolate maker. 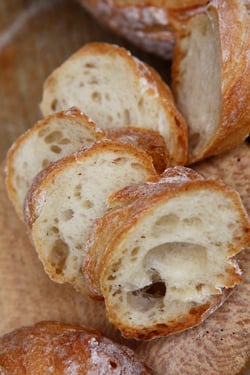 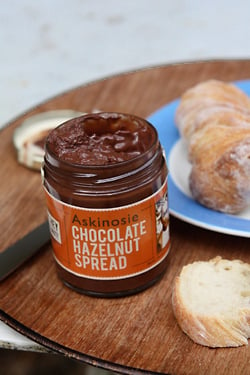 I’m always interested in what the bean-to-bar jar chocolate makers in America are up to, because it’s been such a wonderful phenomenon that’s taken place over the past decade. And was excited when Shawn Askinosie offered to ship me a jar for tasting when I was recently stateside.

I wasn’t sure what to expect when I took it out of its protective (recyclable) padding and twisted off the top of the jar. Dipping in my knife, I found the spread to be not dull, thick, and gunky, but oozy and glossy—no doubt, from all the oil-rich roasted hazelnuts in the jar. It was just thick enough to hold its shape on the knife, and I wasn’t sure if I should lick it off the blade or smear it over a few slices of the beautifully twisty torsade baguette I picked up at Blé Sucré. 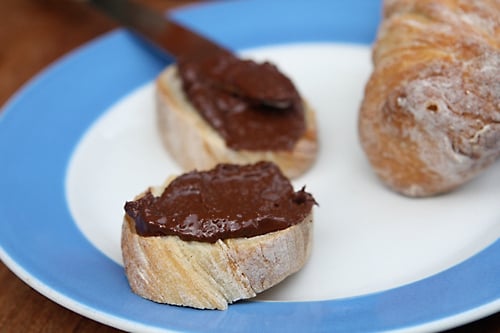 A quick bite a few moments later…and, yes, an illicit lick when no one else was looking (hey, it’s my jar, and I can do with it whatever I want…), I was immediately hooked.

It reminded me of the great gianduja pastes I’ve gotten in Torino, Italy, where the luxurious combination of chocolate and Piedmontese hazelnuts was invented. And every time I go there, I always bring back enough jars that I think will last me until my next trip. Of course, they never do. 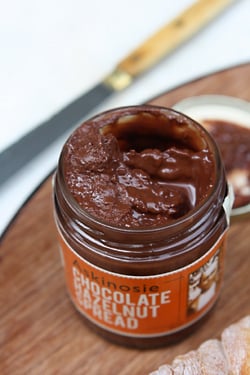 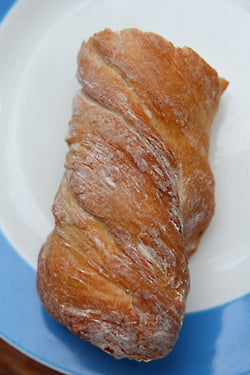 The chocolate flavor of this spread, as well as the texture, is ramped up because of a handful of roasted cocoa nibs blended in, which gives it a very soft and subtle crunch. The nut-buttery flavor of the hazelnuts really comes through as well, since the percentage of nuts…plus the quality, is greater than its universally-available cousin. I could definitely see eating a jar of this a week, or postponing my next trip to Italy because I still have almost half a jar left. But I’m not sure how long it’s going to last—because the week isn’t over yet.

What’s the Difference Between a Chocolatier and Chocolate-Maker?