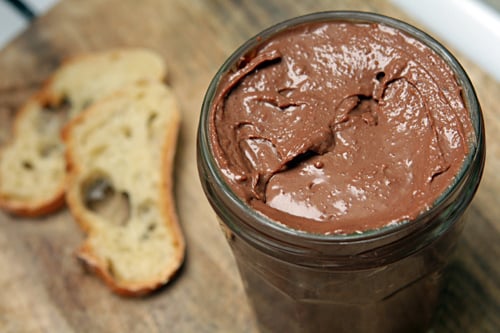 Many years ago I worked in a restaurant in New York with a group of other cooks, who were mostly women and we were all friends. We’d gather in the cold morning kitchen, working around a communal wooden counter near the warm stove armed with cups of strong coffee as we set about our various tasks while engaging in conversations while doing all the repetitive work of chopping the piles of vegetables we used for soups, salads, and other things that we were going to prepare the rest of the day.

One woman, who I’ll call Mary Smith (and who, for some reason, we all called her by her complete name, “Mary Smith”, rather than just “Mary”), was bookish and almost librarian in her demeanor, and she was attending a local Ivy league institution, getting her doctorate in Russian and Russian studies. She worked very efficiently with no unnecessary movements, and always had perfect posture, like a ballerina, along with pristine skin and straight brown hair pulled sharply back in a tight ponytail. 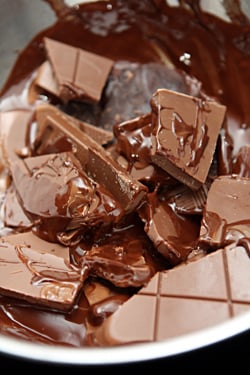 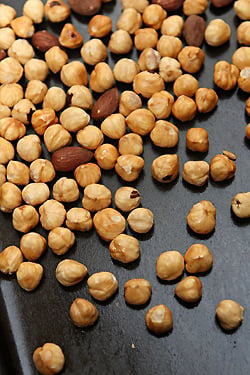 One quiet morning we were all going about our usual business of silently peeling onions and chopping celery when Mary put her knife down on the counter, looked up, and simply announced, “Who do I have to bl-w around here to get some carrots?”

Startled at the suddenness of her request, as well as the straightforward delivery of it, we all just kind of froze for a moment in mid-action, and stared at her until someone broke the stone silence of disbelief.

As I’ve come to believe, it’s as if they’ve implanted something in my brain so stores in Paris can know what I’m out of so that when I get there, they can be sure to not have it in stock. So I went to G. Detou (which translates in French as “I have everything”, which they normally do) to pick up hazelnuts to try a recipe for World Nutella Day from the Encyclopédie du Chocolat that landed on my doorstep. Of course, they had every kind of nut and seed crammed onto their shelves; almonds, cashews, pecans, pine nuts, peanuts, pumpkin seeds, Brazil nuts, four kinds of pistachios, and even Macadamia nuts. They indeed have everything—except the one thing that I wanted: hazelnuts. 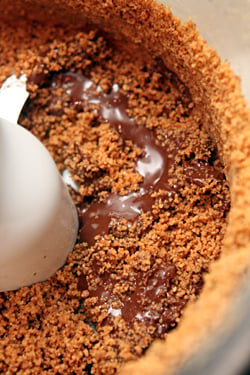 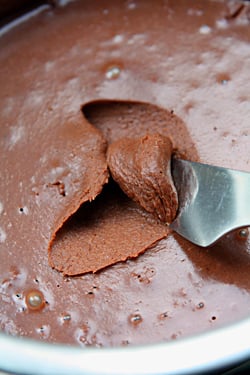 But lest you think I’m beginning to sound like a broken record, it’s not just me: a woman was there at the exact same time looking for the exact same thing as I was. So maybe, or maybe not, my paranoid ramblings of brain implants are just in my head. (Although I’d love to know how uncanny it is that this always happens to me.)

And I spent the second half of my day looking for these seemingly-common nuts…and after wondering what kinds of acts I’d have to perform to find some hazelnuts around here, I finally came across them at the Arabic market, which never fails me when I’m in desperate need of something. Plus as an added bonus for my troubles, they came already skinned. So at long last, with nuts firmly in my grasp, I finally headed home. 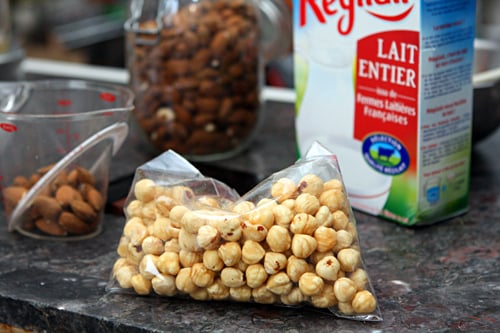 There were a few recipes in this book that raised an eyebrow: Lobster with chocolate mousse? Fish with a green tea-white chocolate sauce resting on a pool of milk chocolate sauce enriched with fish stock? Well, you likely won’t be seeing them on the site anytime in the near future. But being open-minded, if anyone does try them, I’d be interested in knowing how they turned out.

Yet I was interested in the recipe Pâte à tartiner maison, or “homemade spreading paste.” I’m not sure why they call for a small amount of almonds (to make me have to look for two ingredients instead of one?), and two kinds of chocolate—milk and dark—when you’re already adding fresh milk and milk powder. (Although I think the bigger question is who would mix chocolate and seafood?) But I’ve learned not to ask questions any longer and just deal. 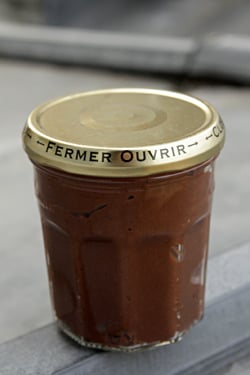 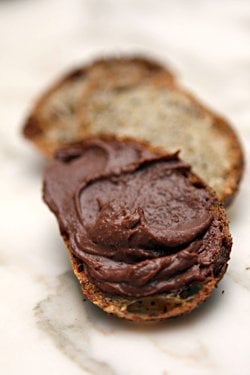 Adapted from the Encyclopédie du Chocolat under the direction of Frédéric Bau. As noted, I wasn’t sure why they called for a small amount of almonds so I think you could get away with swapping out hazelnuts for the 1/3 cup (40g) of almonds and save yourself a trip to the store. I also think you could use all dark chocolate, and perhaps skip the honey, but since I have two jars of this homemade Nutella in my refrigerator, it’s going to be a while before I make any more. Frankly, I was concerned when I was done at how liquidy the mixture was. But after a few hours of refrigeration, the spread was just the right texture for smearing on bread. Because a number of ingredient questions came up in the comments, so I’ve answered them at the end of the recipe.

Storage: The Chocolate-Hazelnut Paste will keep in the refrigerator for up to one week.

When I started gathering the ingredients in my kitchen, I realized I didn’t have any milk chocolate (although I did have almonds and surprisingly, powdered milk), so put my coat on and headed out in search for some. I won’t tell you what that entailed. But in the end, I was rewarded with a couple of jars of tasty homemade Nutella which are sitting in my refrigerator, so I know right where to find them.

Notes: A few people left questions in the comments about ingredients and substitutions. You can read what I say at Baking Ingredients and Substitutions, especially the section about using lower-fat dairy products than recipes indicate. As noted, this recipe is adapted from another one and although I made a few adjustments, I kept the ingredient list fairly intact. I did suggest some possible modifications in the headnote of the recipe of variations that I am pretty certain will work.

For those with questions about whole powdered milk, I have seen it at Indian and Latin markets, sometimes under the Nido brand. (A Nestlé product.) It can be ordered online through Amazon, or another brand can be ordered through King Arthur Flour. A number of readers in the comments noted that they made the spread with low-fat powdered milk and had success with it.

This recipe is part of the round-up for World Nutella Day. You can see the rest of the entries at the round-ups at Ms. Adventures in Italy and Bleeding Espresso. 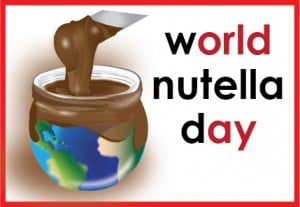