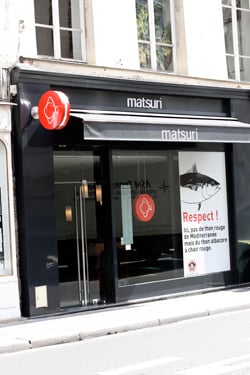 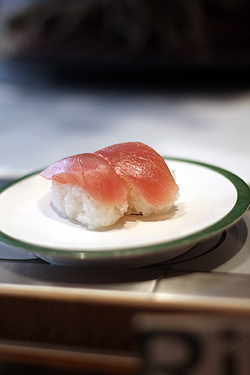 [UPDATE: Matsuri is no longer open at the rue de Richelieu address.]

When I was a teenager, we made a trip to Los Angeles and a family friend took us to a Japanese restaurant. I remember it well, because I was going through that phase where you’re willing to do things on a dare, not because you’re keenly interested in new experiences, but because you want to show off that you’re not afraid of taking on a few dares. And I remember some of my family flipping out a little when we were presented with a big, shiny wooden board covered with raw strips of fish, lined up in neat rows, ready to be eaten just as is.

Because part of my youthful folly of trying to be daring and ‘different’ was using chopsticks to eat everything (as if just being myself wasn’t enough…), I was also happy to be able to show off my mastery with les baguettes, as they’re called in French. And I was going to fearlessly eat raw fish with them. 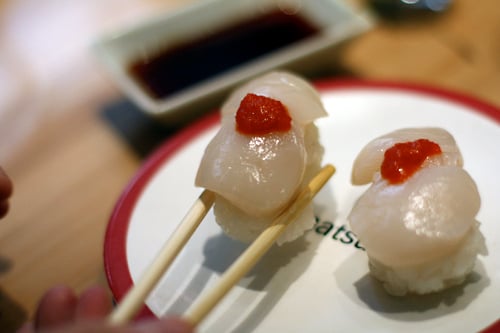 I don’t remember what I ate exactly, but I do remember that trepidation of my first bite, and seeing a few people at the table squirm as I chewed and swallowed the first of those cold, slippery slices of fish. Of course, sushi is now considered normal fare in many countries and you can buy it in supermarkets, airports, and even in the frozen food section. And I’ve been in pretty remote towns in both the United States and in France, and have passed restaurants serving sushi, or les sushis.

During the few decades between that first bite of fish that I had, and now, our collective international hunger for seafood has grown, so much so that many popular varieties of fish used for sushi are on the brink of disappearing. French president Nicolas Sarkozy attempted to ban bluefin tuna but an organization of French fishermen and other groups successfully stopped the ban. So in spite of its tenuous position, if you go to a fish market this morning, you’ll see glistening on ice, big, meaty, shiny-red triangles of that unfortunately delicious bluefin tuna along with many other species that are not considered responsible.

A few top French chefs have taken bluefish tuna off their menus, in their upscale restaurants, but the ‘fast-food’ style sushi restaurants that have invaded Paris are invariably packed at lunchtime. Sometimes visitors are surprised to see so many sushi take-out places, which seems to be vying in Paris with the banks and boulangeries for storefront dominance. But like people in cities elsewhere, the locals are looking for something quick, inexpensive, and healthy for lunch. Parisians, mostly the younger crowd, have embraced these quick sushi joints, which normally have just three kinds of sushi: bluefin tuna (thon rouge), shrimp, and salmon, which are considered some of the least sustainable types of fish and seafood you can consume. 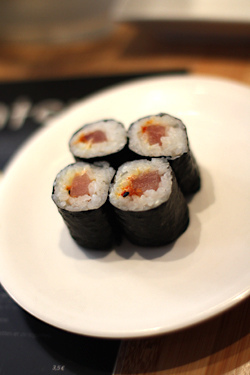 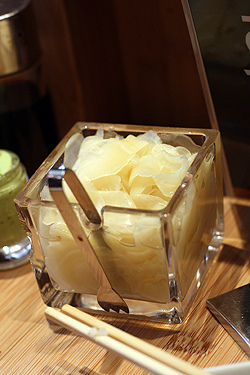 Like so many others, long after that first experience with poisson cru (raw fish) back in California, I’ve developed a deep fondness for sushi and sashimi. But as the news and scientists report about disappearing species, I can’t shake that deeply ingrained “Bay Area Guilt”, as I call it, about trying to be vert and have a difficult time sitting down to a meal and eating something that’s on the verge of extinction.

(Which is why I will also get up and walk to the other side of my apartment to recycle a postage stamp-size scrap of paper rather than toss it into the trash can under my desk or I’ll carry around a used métro ticket in my pocket for weeks until I get to a place to recycle it.)

Being a good foot soldier, still to this day, I’ve dialed down drinking bottled water as much as possible, and I’ve seriously curtailed my consumption of fish. But when I walked by Matsuri, a chain of sushi bars in France a few months back, and saw the sign outside that they were serving another kind of tuna, I decided to check it out with Meg of Paris by Mouth. 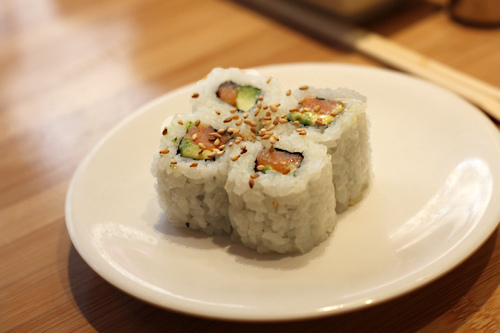 The sushi at Matsuri arrive to diners via a motorized conveyor belt. So for hard-core sushi fans, this isn’t a place to go to discover the skills of a well-trained, inventive sushi chef. I normally wince when I see floating boats and other gimmicks in sushi bars, but so be it. And it was nice to see a laminated card on each table, talking about the sushi éthique, the sustainability of the scallops and albacore tuna that they serve in place of bluefin tuna (thon rouge). 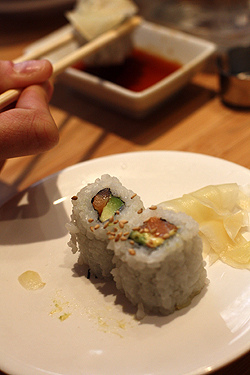 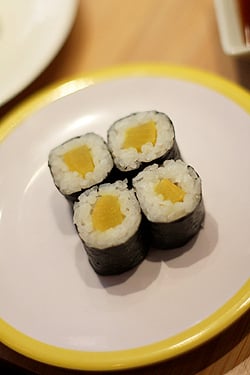 The sushi wasn’t knocking our chausettes off, but it was encouraging to see and to eat sushi that you didn’t have to worry too much about enjoying. (Most of the varieties are on the WWF’s—avec moderation seafood list.)

As mentioned, I’m suspicious of places were the sushi goes around and around and around (and around) on a conveyor belt. But the staff seemed to be putting just the right amount of things out and I didn’t see many of the small plates taking multiple tours around the dining room. Although Matsuri is a small chain of restaurants, the sushi is made there and most of the standard small rolls and sashimi rolled by were familiar favorites.

However we were seated about two-thirds of the way down the conveyor belt and the three fellows just to our left, and the woman with two small kids just before them, seemed to have an uncanny knack for reaching for what we were oogling just before we got our crack at it. So if you go, try to get a seat closer to the open kitchen, where the sushi comes out, for best selection.

Still, I like when restaurants run out of food, and it’s fine when it doesn’t necessarily come out super-fast, which often is a good indication that it’s prepared fresh and with care. Running low (or out) of things means they’re not stockpiling. 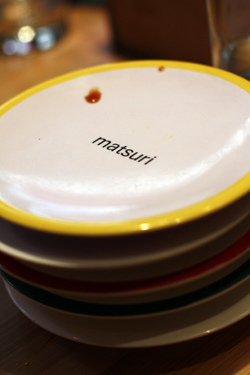 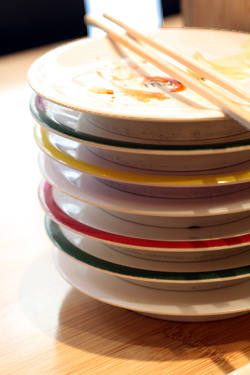 For all the fresh fish consumed in France, including salmon tartare, which has become a staple on each and every trendy bistro menu, it’s interesting that only a few decent sushi bars have opened in Paris. But as much as folks grouse about chain restaurants, it’s gratifying to see one leading the way in France, showing that you can serve sustainable food at approachable prices. It’s a trend that I hope to see more of.

(With each dish priced between €2 and €5, with two mugs of hot green tea, our lunch was €36. Matsuri has various restaurants and take-away shops in Paris and other French cities, as well as Geneva.)

Saying No To Disposable Chopsticks