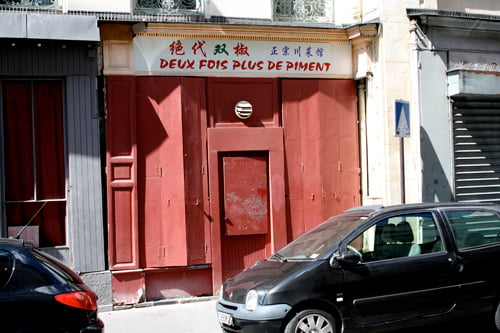 A lot of us étrangers (and there are some pretty étrange étrangers here..) bemoan the lack of heat and spiciness in the ethnic fare served up, because a good number of the locals have a hard time dealing with the heavily-spiced dishes that our all-American constitutions have no trouble handling. We, The People, have cast-iron stomachs and have become a nation of full-tilt eaters, relishing and exalting things that we can take to the extreme. But I met my match at Deux Fois Plus de Piment (Two Times More Pepper). We were walking by recently, looking for a place for dinner, when I noticed this joint that just looked right.

Yes, I have my faults. And many out there seem to take great enjoyment in pointing them out. But I will take credit for having an uncanny ability to tell if a restaurant is a good one just by just looking at it. I don’t know why, and I wish I could transport that unique talent into other areas, like, say, picking stocks, but I spend a lot of time wandering around cities, peering in windows and looking at menus before I go in and sit down for a meal. In fact, I often set out early for lunch, around 10am, because by the time I find just the right place, it’s sometimes hours later, and the restaurant is closing up their shutters by the time I’ve made that important decision. 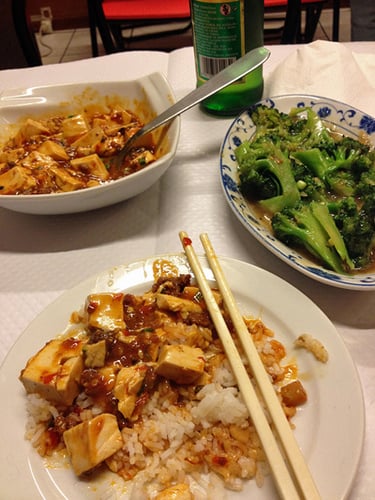 I have a deep dislike of eating—and paying for—badly prepared food. So before I go inside, I like to mentally scope everything out, right down to the last detail. Of course, it drives everyone else crazy, but it’s one of the few things I’m always right about and the reward for their patience is that they get to eat well. (I have a longer list of things I wasn’t right about…but let’s not share those right now.)

After passing by this place, we went in. I don’t remember what we had (which is why in addition to not having a promising career as a stockbroker, I leave the restaurant reviews to the professionals, too) because everything below the top of my head felt like it had been set on fire. The Szechuan food was spicy beyond belief, my mouth and throat buzzing with the fuzzy heat of Szechuan pepper and an overly generous bounty of those dinky little chili peppers that hide insidiously amongst the meat and vegetables, but may-the-good-lord-take-mercy-on-you if you accidentally pop one in your craw.

The other patrons, mostly Asian teenagers, were eating their dinner as if nothing was wrong, while Romain’s face turned the color of a late-season very-ripe tomato and looking like it was about to burst. I don’t know what I looked like, being blinded by the heat with tears of pain (admittedly, mixed with a little joy) rolling down my cheeks. I believe it was the first time ever that a bottle of beer would be considered a first-aid device.

When you go to an Asian restaurant in Paris, especially one that specializes in spicy food, tell the waiter you want it authentique when you order, rather than épicée or pimentée. That means you don’t want it tamed, as they often will do to appease any less-adventurous locals. But beware; unless you’re willing to suffer the consequences—and I warn you that behind these red shutters, there will be conséquences, you might want to ask them to go just une fois on les piments. Or maybe I’m just becoming a little more of a local than I thought.

ANOTHER UPDATE: They opened another restaurant, Trois Fois Plus de Piment at 184, rue St. Martin in the 3rd.