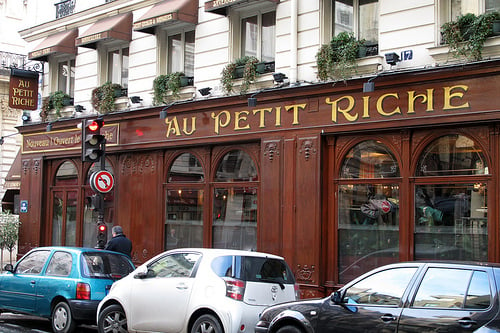 Always on the lookout for classic French bistros, a friend and I recently stopped at Au Petit Riche. I’d eaten there before and found the food decent, but I remember the company a little better than the food. I was dazzled by the stunning interior and the conversation, which should have been a tip off since I rarely forget anything I eat that’s good.

Many Americans have become more astute about dining and want to know where the ingredients are from, how they are handled, what part of the animal they’re getting. It’s part of the farmer’s market movement, as well as a number of folks striving to eat locally or at least show some concern for where and how their foodstuffs are raised.

And there’s also the do-it-yourself movement, where everything from upstart ice cream shops are opening, and of course the bean-to-bar movement, where every step of the process is carefully tended to. In general, the French don’t ask those questions because France has always been a deeply agricultural country, with close ties to their terroir. When dining with friends from the states in Paris, I know they’d be disappointed to find frozen green beans with their steak, or boiled white rice heaped on a salade Niçoise. So I am always careful to steer them away from some of the classic bistros on their lists, ones they may have eaten at a decade ago, or that a friend recommended.

I was recently asked about the difference between American and French ideas of service and I said that the standards are different and generally that in France, the idea of good or bad service is quite different from what we use to gauge service in the states. I chuckle when I read reviews that note things like “Our water glasses weren’t refilled promptly” or “The table next to ours got their food a minute before we did, even though we ordered first.”

In France, the waiter is there to serve you, not be your best friend or coddle to your every need. It’s a cultural difference and Clotilde Dusoulier hit it on the head when she says in her book, Clotilde’s Edible Adventures in Paris, “…the French like to be of service to their customers, but not at their service.”

People, invariably the ones who don’t live here, laugh when you mention bad restaurant service, and say, “Oh, that’s just so French!” But it isn’t. Real French restaurant service is professional. Even in a humble café that serves croque monsieur, where one waiter covers the whole dining room, there’s a difference between rude and harried. I don’t expect, nor want, the waiter to come racing over the refill my water glass—if I want something, I’m capable of asking, and don’t need them “checking in to see how I’m doing with that” with me between each and every mouthful.

I love the interior of Au Petit Riche, which is slavishly classical down to the metal bar you step up to when you enter and the generous dusting of baguette crumbs which cover the waiter’s station.

When we sat down for lunch, the waitress handed us the menus and the wine list, and immediately asked us what we wanted to order. My backside had barely landed in the seat, literally, and faced with a three-page menu, I said that we’d like a few minutes to peruse it.

After she took our order, she then asked, “And what would you like to drink?” As my lips just began to move to form the words with our wine selection, she turned and walked away before I could respond. 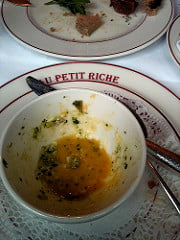 When she came back a few minutes later, I asked “Why did you ask me a question, then not wait for the response?” She said, “I thought you might want a few minutes to make up your mind.”

At that point, I should have thanked her for her time and left. (Like other customers did when I was eating at Le Repaire de Cartouche.) But having eaten at Au Petit Riche once before, and being familiar with the quirks of French service—and how you sometimes need to wait it out win them over, we stayed.

Our first courses were really good; my friend ordered the foie gras, which was generous and the two slabs were served with nice, warm toast. The shriveled up poire tapée alongside was a poached fig, or so insisted my friend, since it was somewhat unrecognizable. My Œufs cocotte was served with a bright-green emulsion of fresh herbs and tiny points of asparagus which was so good, I scraped the warm little bowl of dreamy poached eggs clean.

Anticipating our main courses, when they brought them over, it was as if the first kitchen crew had taken a break and another one stepped in to send out the main courses. My companion’s filet of bar (bass) was fine, but the étuveé of fennel, piled up next to it, was a drab gray-green mound of vegetation that was so uninviting that she ate one tiny piece, made a face, and pushed the rest away.

With fresh fennel abundant and in season at every market in Paris, why not serve a simple tangle of it quickly tossed with a bit of olive oil and lemon juice, and perhaps some chopped anchovy? Any competent restaurant cook could put that together in less than thirty seconds. I find the lack of concern and care disrespectful to French cuisine.

(And speaking of fresh, seasonal food, we’re in the middle of fresh peach season here and Romain was served a canned peach for dessert the other day.)

My Suprême de poulet farci aux trompettes was a rolled up chicken breast that was pitch white and without flavor; perhaps it had been previously frozen.* The trompettes flecked in the stuffing were black trumpet mushrooms, which I was convinced were there for appearance and they had even less flavor than the chicken. A handful of herbs, or something else with flavor, would’ve been preferable for a kitchen on a budget. The chicken was served cut on the bias and upended, the sauce underneath was simply unseasoned liquid tomato sauce; a pre-prepared puddle slathered onto the plate.

On a plus note, the wine, a brisk Vouvray was served in a lovely round carafe packed in a seau of ice. It was a nice touch and an example of what the French do best in terms of proper service, which you can find even in a humblest establishments. (It was served not by our waitress, but by another server.)

One of the great things about Paris are the gorgeous old bistros and brasseries that serve hearty traditional French fare. Places like Chartier, Chez Dumonet, and A la Petite Chaise manage to serve respectable French fare and do it well, each at various price points.

People say that French food is dying, or is already dead, and point to Spain and Italy as beacons of inventiveness and freshness. With McDonald’s and Subway taking over France (folks often blame American imperialism for the spread of these places, and it’s easy to implicate the companies for planting their feet in France, but they wouldn’t be as wildly successful as they are if there weren’t lines of locals streaming out the door), I sadly wonder how if any real, honest bistros will be left in Paris in the next few years.

As Alec Lobrano says in his book Hungry for Paris: “…the mediocrity of the brasseries’ food has become unfrequentable. The problem was that behind the scenes, it was accountants, not cooks, who edited the menus and…enthusiastically embraced almost every industrial shortcut devised by France’s booming food service industry, notable mass-produced sauces, soups, salads, frites, and desserts.”

Even Patricia Wells, an indefatigable defender of French cuisine has given up, said in a recent interview: “I have given up on brasseries where the food is always disappointing…”

For the best French fare, I hit the wine bars, preferring to enjoy the wonderful charcuterie and cheeses of France, still made with care by the various producers in France whose depth of flavor make it clear and obvious that they’re proud of what they do. And it’s interesting sipping glasses of natural wines, which are exciting not always because of their flavor, but because they’re examples of the younger French generation attempting to use less processed foods and experiment with various other ways making wine. True, some of them aren’t great, but they’re honest and each glass I try is a little bit of a challenge to what I think wine should be like.

Le Verre Volé, Le Baron Rouge, La Garde Robe, and Tombe de Ciel are some that I frequent often. The service is always friendly, the food is simple, and wine orders are always taken, happily.

Time is running out for France’s faltering bistros (The Guardian)

Au Revoir to All That: Food, Wine, and the End of France (Amazon)

Is it possible to have bad food in France? (Just Hungry)

*In Italy, when restaurants serve frozen foods, they note which ones at the bottom of the menus. Several readers noted that that is the law in Italy, and although I have anything against certain frozen foods, whenever I saw that, I though it was nice of them to notify guests so they could decide for themselves before ordering.