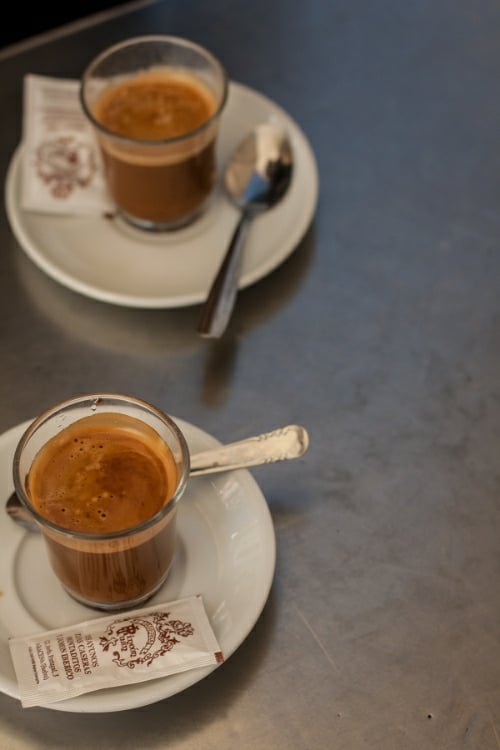 I’m not a fancy guy. I don’t insist on expensive clothes, I don’t drive a car, my hair is such a disaster I take the clippers to it once a month just to so I don’t have to deal with the unruly mess, nor do I give a hoot about sitting in a suit in a 3-star restaurant, with a tie closing up my throat while I try to pretend I’m enjoying a fancy meal. To me, one of the great joys in life is simply a good cup of coffee.

Over the years, I’ve whittled my tastes down to espresso, which is the true essence of the bean. While I like café au lait for breakfast, probably because it encourages the lingering that I need in order to gather up the courage to face yet another day. But in Spain, however, no matter what time of day it is, I always order a café cortado. Even though it’d described as a similar riff on the caffè macchiato in Italy, or the café noisette in France, which gets its name from having just a noisette (hazelnut) of foamed milk on top (although another description says that it’s because it turns the coffee the color of hazelnuts), to me, it tastes like a very different drink altogether. 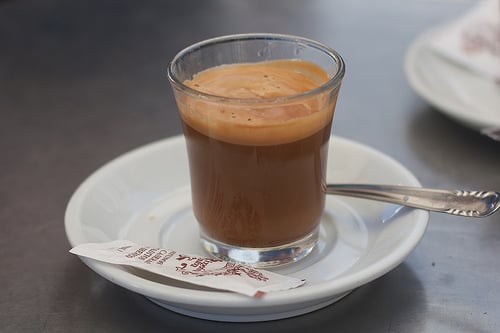 Café cortado – perhaps it has something to do with the name, the alliteration with those two Cs in a row that roll off your tongue, helping it sound so resolutely Spanish. Or the tiny glasses they serve it in, which the vested waiters with black ties set down before you with one hand, and a moment later, the other hand swoops down with a pitcher of steamy milk, to create a frothy, yet strong, coffee drink. And whatever they do to the milk, it’s especially velvety. They just seem to get the foam right. There’s nothing worse than having a coffee drink with a crown of airy foam on top – who wants to dive into that first anticipatory sip of coffee, but instead end up with a mouthful of air? Pas moi. And the café cortado combines the soothing creaminess of steamed milk with a reasonable jolt of a café solo.

I also like the glass. An Italian friend told me never to order espresso in a cup in Italy – to ask for it in a glass – because the porcelain retains some of the flavors of the dishwashing detergent. (Unfortunately my Italian isn’t very good and I always forget the phrase I’ve tried to memorize, to ask for it in a glass.) That may be one reason the café cortado alway tastes so good to me. It’s the glass. Or maybe it’s the sharp waiters with their slicked back hair and dark Spanish features, accompanied by the smell of sugary pastries in the fluorescent-lit showcases? I don’t know, but standing at a stainless-steel counter watching them pour the milk into the darkly extracted coffee in the glass while the milk foams up around it, but making sure it’s not too airy so you can enjoy the coffee that it’s mingling with, is one of the great joys in life. And one of the joys of visiting Spain. 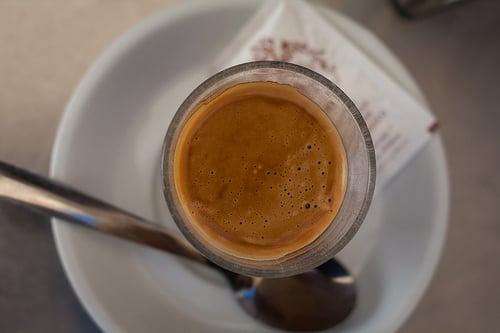