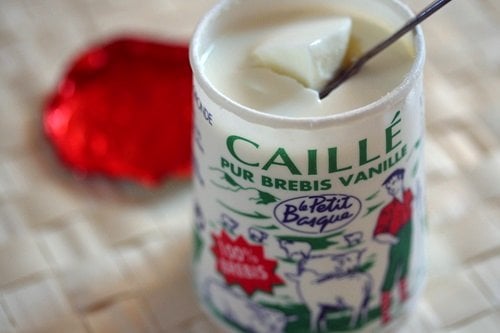 The yogurt aisle in any French supermarket is the largest, longest, most well-stocked aisle in the store. (Wine, I think, runs a close second.) While there’s a disconcerting number of dubious treats there (coconut macaron or lemon madeleine-flavored yogurt anyone?) the simplest varieties are wonderful.

I’m hopelessly boring, but I like whole milk plain yogurt, which is my afternoon snack. I eat it with dried fruits, a tipple of berry syrup, or just slicked with honey. Luckily yogurt here comes in handy 4-ounce portions, the perfect size, and I don’t miss those hefty pots of purple, super sweet, gelatin-thickened gloop, which barely resembles what yogurt even is. In between all the yogurts here, you’ll find a few oddities buried in there.

The bad ones in the brightly-colored packaging, though, I find oddly alluring, like the profiterole-flavored number I saw recently. But there’s plenty of good things in that dairy case. One of my absolute favorites is caillé. 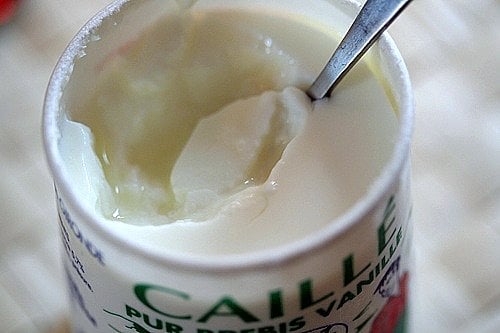 This caillé is made from coagulating sheep’s milk (unlike caille, or quail, which are created by an entirely different process) and the first time I had it, I’d just arrived in France and was at a friend’s apartment, and he gave me one. All I could do was shout out an all-American—Oh my God!

It was a smooth, almost jellied, gently-sweet little pot of magic. I’m an unsweetened kinda guy, preferring to do my own tinkering. And although plain caillé is an option, for some reason, the small bit of sugar added makes this a perfect little treat exactly as it is. The sugar isn’t a full-on sugary assault, but kicks in a few moments after you take a bite, allowing you to savor the tangy taste of the lait de brebis first.

Curiously, my local Franprix grocery store has a staggering amount of yogurts, except—get this: they don’t carry plain, whole milk. So I’m often reduced to splurging on caillé. Not that I’m complaining. I just hope these don’t disappear, too. Otherwise, things are gonna get ugly.