A subject, and and ingredient, comes up frequently when talking about baking and candy making. And that’s about using corn syrup in recipes. I use it judiciously when it will make a discernible difference in a recipe. For those of you who are regular readers of the site and my books, you’ll notice almost all of the time, I rarely use pre-packaged or convenience foods in my baking. So when I do call for something, like corn syrup, it’ll often be in amounts of one teaspoon or a tablespoon. And since most recipes feed eight-to-twelve people, proportionally, that’s a pretty small amount.

Yes, people who live in America probably do eat too much corn syrup. (High fructose, or otherwise.) That can be controlled and monitored by using less-packaged foods and reducing the amounts of fast foods that you consume. If you’re worried about corn syrup “hiding” in foods, read labels, cook for yourself as much as possible, and buy locally-produced products from smaller producers who are less-likely to put additives in foods, so you’ll be in control of how much you’re eating. I am a fan of natural and alternative liquid sweeteners, such as agave nectar, maple syrup, honey, rice syrup, and golden syrup, and do have recipes that use them, and encourage folks to give them a try, where applicable.

There are a lot of studies, medical reports, advertising, propaganda, and all sorts of information being disseminated from a variety of sources. Evidence does point to high-fructose corn syrup contributing more than other sweeteners, to obesity and other health issues, and you can search around and come to your own conclusions. Since I’m not a doctor, nutritionist, or medical researcher, I’ve provided some links at the end of this post for further reading and you can draw your own conclusions.

My personal philosophy about corn syrup consumption: Like other foods that don’t meet a nutritionally-ideal profile, I limit my consumption, but don’t obsess about it. I drink alcohol and coffee. I sometimes eat red meat and cheese, plus chocolate, ice cream, sugar, and marshmallows, all of which have their detractors, too. I walk and ride a bike as much as possible and try to eat a healthy diet that includes a lot of fruits and vegetables, proteins, and whole grains, which offset treating myself to those indulgences.

Why do some recipes have corn syrup in them?

Corn syrup is an invert sugar, which means that it prevents sugar crystals from forming. Microscopically, sugar has jagged edges and when you melt it, sugar liquefies. But if you keep cooking it to a syrup, those jagged edged-fellas want to re-attach themselves to others. Corn syrup acts as interfering agent, which ‘interfere’ with that process. Honey, agave, and the like, don’t have the same properties.

If making a caramel, and a recipe calls for corn syrup, you can substitute a dash of lemon juice or cream of tartar, which performs nearly the same function.

In other cases, like my Best Chocolate Sauce, corn syrup is used to give it a shine. (See below.)

Is the corn syrup one buys in the supermarket the same at high-fructose corn syrup?

Will corn syrup make you fat?

Yes. And so will sugar, as well as other sweeteners. And so will French fries, red meat, chocolate, bread, dried apricots, kale, heavy cream, honey, nuts, beer, wine, maple syrup, martinis, croissants, and tacos, if you eat too much of them.

When can another liquid sweetener be substituted for corn syrup in a recipe?

Like the aforementioned chocolate sauce, the corn syrup is there for the shine and body. Not to prevent crystallization. So you can use another liquid sweetener if you are not making a recipe, like caramels, where corn syrup, is the best inhibitor of crystallization. If you want to use another liquid sweetener in place of corn syrup, possible substitutes are agave nectar, malt syrup, maple syrup, rice syrup, molasses, sorghum, cane syrup, and Golden syrup. Note that all of these have a particular flavor, some stronger than others (like honey and molasses), so keep that in mind if you want to swap one of them out for corn syrup.

I can’t think of any cake recipes that have corn syrup in them, but my Butterscotch-Pecan Cookie Cups uses it to keep the batter smooth and to make sure the cookies will caramelize properly in the oven. In a recipe like that, I would not use another liquid sweetener.

When can one not substitute something for the corn syrup called for in a recipe?

For candy making, I strongly suggest sticking to the recipe. If a recipe calls for boiling a sugar syrup, unless specified, stick to using corn syrup. Especially ones cooked to a higher temperature. Honey, and the like, tend to burn when cooked down, so care should be taken to avoid that.

If the recipe calls for cooking a syrup to a relatively low temperature (below 230F, or 110C), you can experiment with other liquid sweeteners, but I can’t advise in each and every case. You’ll just have to try it and see.

If one wants to substitute another liquid sweetener, such as corn syrup, honey, or golden syrup, for granulated sugar, what proportion can one use?

Why do some recipes for ice creams and sorbets have corn syrup in them?

I very rarely use corn syrup in sorbets, and don’t use it in ice creams. Because it has more viscosity than sugar, some recipes call for corn syrup to keep the churned and frozen sorbets and ice creams smoother and creamier.

In my recipes, this is infrequently done in sorbets that have a lot of water, such as lemon, lime, or grape sorbets, which tend to freeze very hard and get icy. If a recipe calls for corn syrup, it’s usually a minimum quantity. In those cases, another liquid sweetener can be used, or granulated sugar. If using sugar, increase the amount by 25%.

What can be used if corn syrup isn’t available where I live?

Glucose is what most professionals use and can be substituted 1 for 1. It can come from different sources, including corn or wheat. You can look for it online or visit a professional baking supply store in your area. Note that stores that specialize in Asian ingredients may have it, as it’s an ingredient used in Korean cooking. You can also make your own cane syrup from granulated sugar.

Are there any natural corn syrups?

Yes, they are available. One brand is Wholesome, which makes an organic corn syrup, which is available at some Whole Foods stores, on Amazon (which for some reason, is about twice the price as buying it in a store), and at natural food shops. Note that it has a bit of natural color to it, so it may tint things like homemade marshmallows. 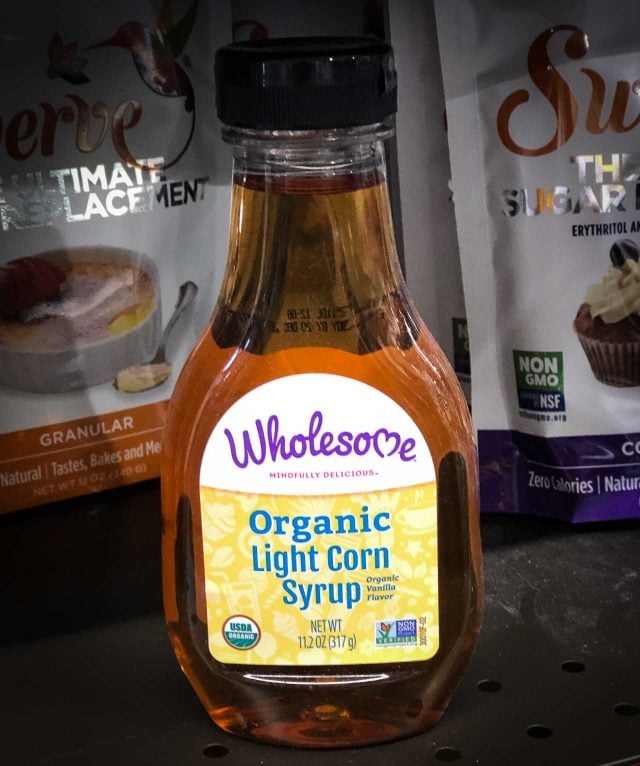 A Recipe to Replace Corn Syrup: How to Make Cane Syrup (The Kitchn)

On Food and Cooking by Harold McGee

Care for Some Mercury with Your Oatmeal? (The Ethicurian)

The Omnivore’s Dilemma by Michael Pollen

A Sweetener with a Bad Rap (New York Times)

Agave Nectar: A Sweetener for Any Occasion (Popular Science)