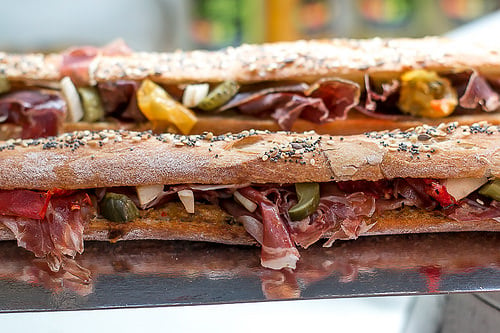 Many times, I’ve walked by Caractère de Cochon, a slip of a place on a side street, just next to the earnest Marché des Enfants Rouges, in the ever-growing hipper upper haut (upper) Marais, and wondered about the cave à jambons jam-packed with hams of all sorts hanging in the window and from the rafters. But I’ve never stepped inside. 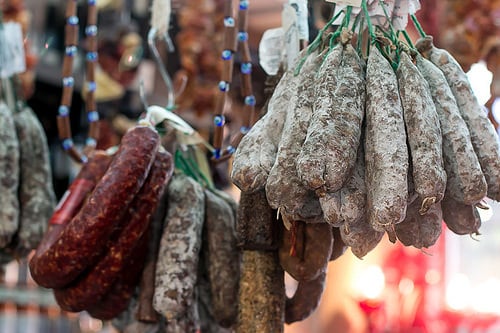 But recently I was talking to my friend Jennifer, and she’d mentioned the place in glowing terms, letting me know it was, indeed, an amazing emporium dedicated to all-things-ham. So we made a date to go. However as (my) luck would have it, of course, on the day of our date, it was closed for a fermeture exceptionelle. 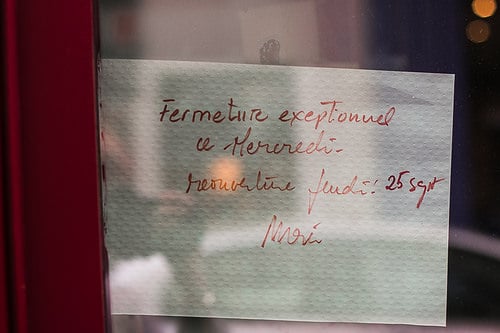 Which, in my case, seems to happen a lot. 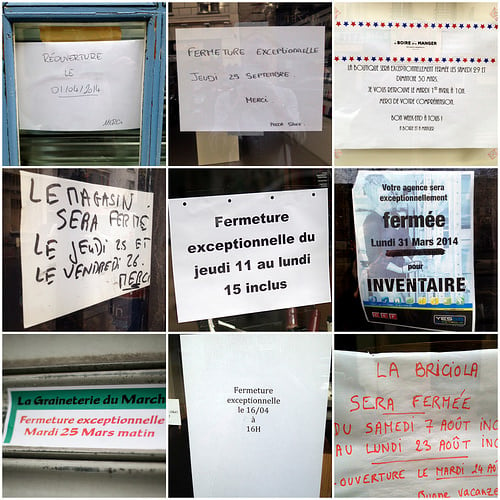 However, we were persistent and made another date to meet up, because it just sounded too good to miss. 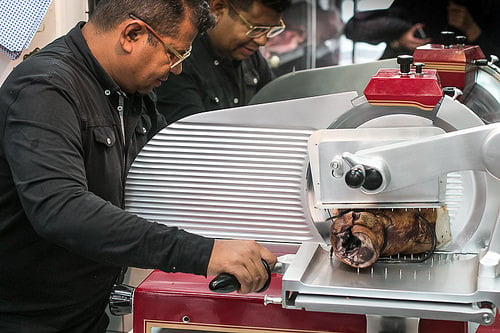 Fortunately a few days later the shop was wide open and inside, Solo, the happy owner of Caractère de Cochon, was presiding over his shop and manning the slicer, helping customers who were coming in and out of his tiny shop, fulfilling their charcuterie needs. 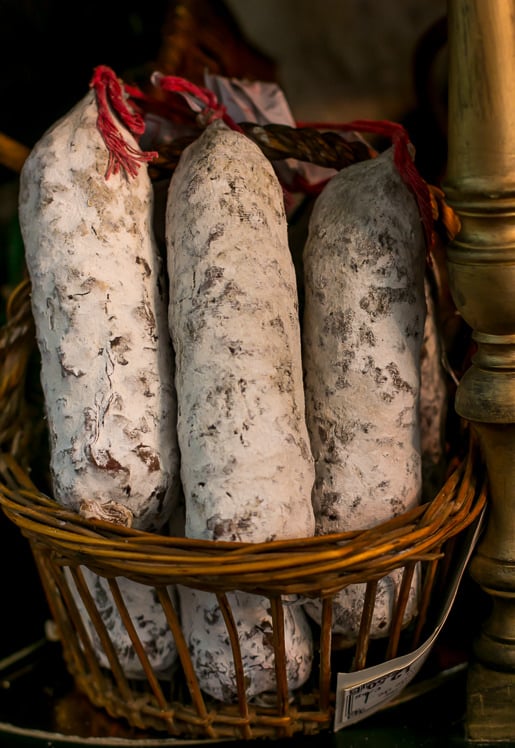 It’s hard to know where to begin when describing the shop, his Solo (who was originally from Madagascar, and moved to France about thirty years ago to do his studies), realized that other countries – namely Spain and Italy – had shops that specialized and highlighted all the regional hams, but there weren’t any in Paris. So he decided to do something about it.

(Another fun fact is that caractère du cochon in French translates to “pig’s character,” and refers to someone who is a bad person. Which, oddly, is the complete opposite of the effervescent Solo.) 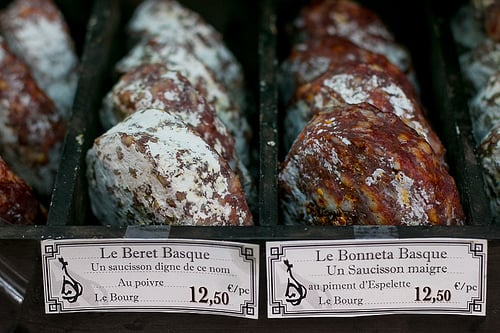 In his shop, Solo has everything from jambon de Paris, the true boiled ham that’s the only one still made in Paris (and is excellent, and will make you swear off other boiled hams), to hams flavored with mirabelles, tiny yellow plums that are boiled in the bouillon with the hams, which I was skeptical about, until I tasted the lovely jam-like flavor it gave the ham. Then I gave it a thumbs up.

There are also hams flavored with black chanterelle mushrooms, rosemary, and spicy-red piment d’Espelette. You can have sandwiches made from any of these hams, as well as Rostello, and truffle flavored mortadella (bologna) from – appropriately – Bologna. 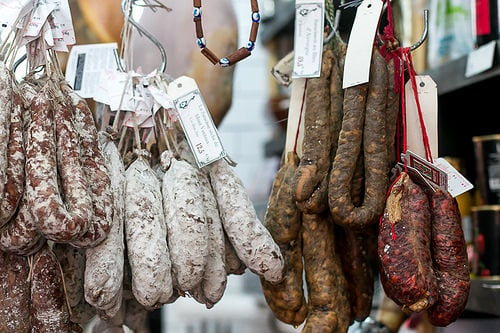 There are reduced-fat sausages (maigre), for those watching their ligne. And for those not giving a hoot, you’ll find things like guanciale (cured pork cheek), at the other end of the spectrum. 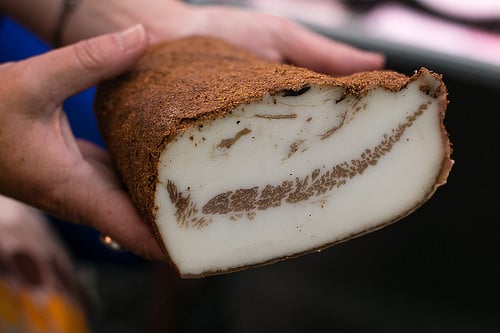 Spain and Italy are well-represented, including legs of bellotta ham, aged for four years, and tightly coiled sausages from Italy flavored with bay leaf, with a pig’s ear rolled up inside. 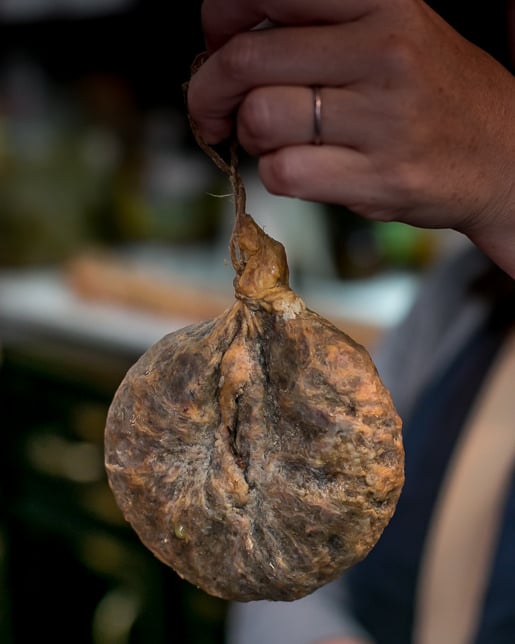 Solo gave us a taste of fitonu, ripped from a slender, wrinkly Corsican sausage that is sort of an upscale version of jerky, which is chewy and musky, and – yup -delicious. But when I asked him what his favorite ham in the shop was, he said quickly, “L’Ibaïona,” a Basque ham aged for 36 months made from pigs that gorge on chestnuts and chestnut flour.

He gave us a taste, and I could see why he liked it. But I was also curious about the terrines. One was baked in hay, then doused with Cognac, lit on fire, and smoked. 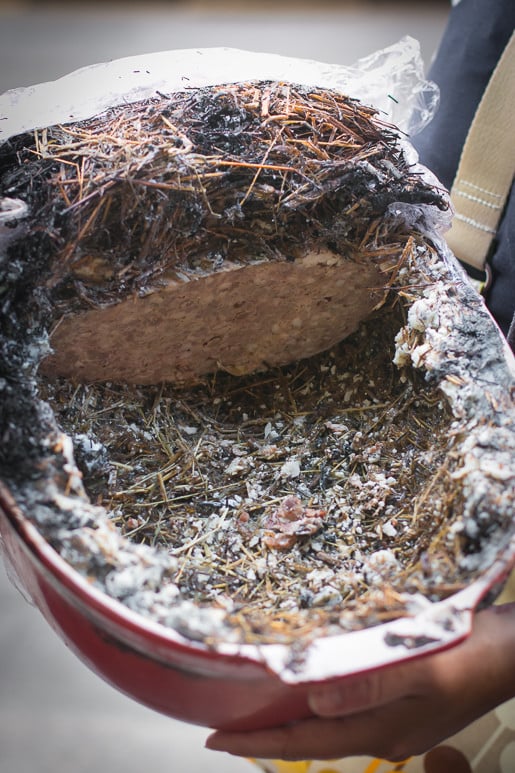 Another was a terrine of beef cheeks and tails, which tasted like the world’s best brisket, compacted into a rectangular loaf. That’s the one I think I’m going to be coming back for the most. 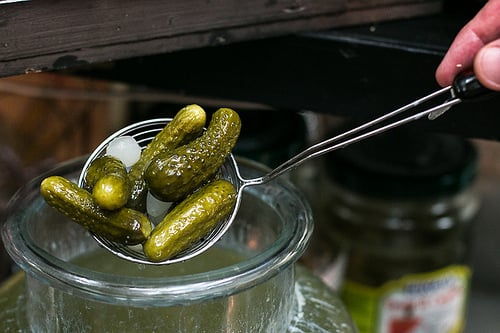 But you don’t need to be a connoisseur of all-things charcuterie to enjoy the shop. One of the first things that made me fall in love with France, and French cuisine, was a simple sandwich; le jambon-beurre — a baguette sliced in half, generously buttered, with good ham tucked between. 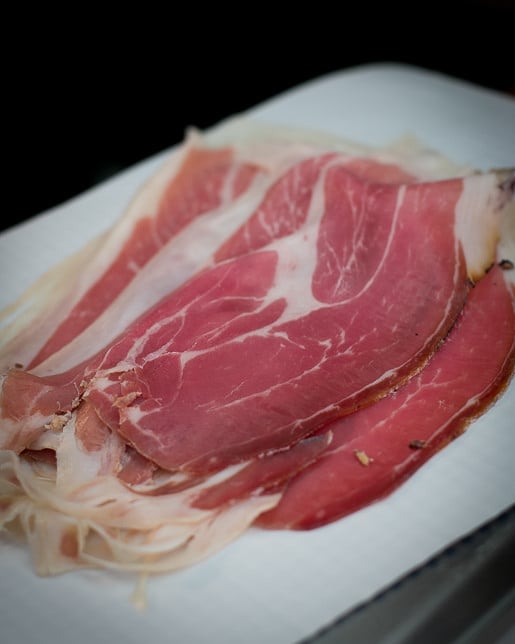 Like a number of things, an honest jambon-beurre, made on an especially good baguette, with the true jambon de Paris slapped inside, is harder and harder to find around town. And Caractère du Cochon is the go-to place to get one in Paris, as far as I’m concerned. 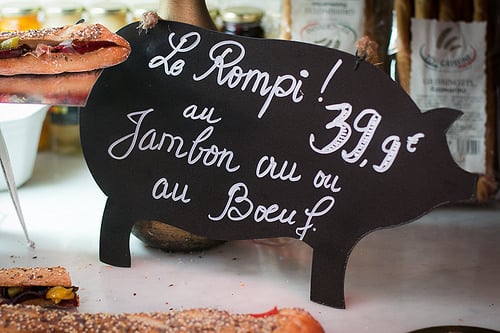 For those looking for the ultimate ham sandwich (at least when it comes to length), there is Le Rompi, a long, slender sandwich that can be made to order, with ham or beef, along with some of the lovely condiments that the shop carries. The pea-like marinated tomatoes they use are so good, I swore they were from Sicily. But the other clerk in the shop, who gave us taste by giving us each one on a spoon, said they were from the south of France. The petit orb was like an explosion of an entire pound of juicy, sun-ripened tomatoes, packed by nature, into one itty-bitty bite. There are a few other options, including pickled cornichons, or whatever strikes their (or your) fancy, that you can customize your sandwich with. 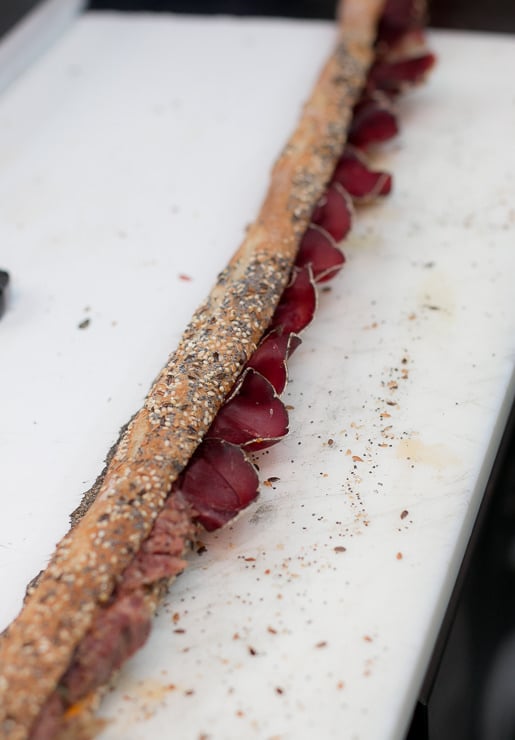 Another French speciality they carry is andouille, a rolled up sausage made of a bunch of stuff that you don’t really want to know about. (FYI: The Wikipedia entry says that its cousin is “…stronger in scent when the colon is used.”) I can’t say I’m a fan, and think it’s something that you need to be born and raised in France to enjoy. However if you want to give it a try, I’d imagine the version sold here is the best of the lot. (I’ll take your word on it, if it’s good or not.) 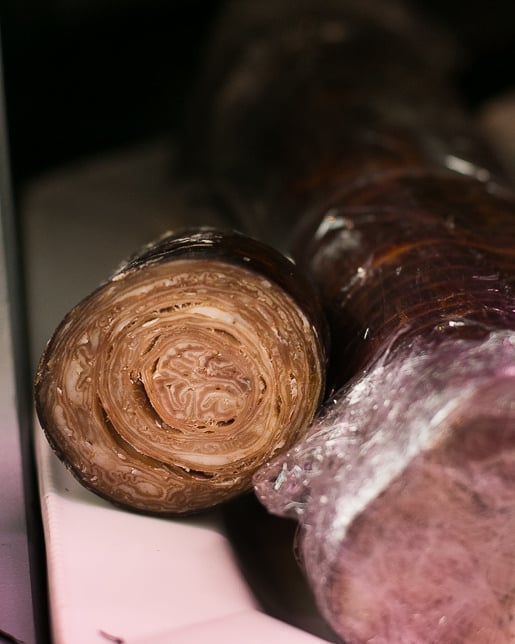 While we were there, it was Fashion Week in Paris, and local fashionistas were stopping in and hastily picking up a half (€19) or whole (€39) sandwich, which Solo said people serve for appetizers. A few of the patrons were obviously very important, because one woman was wielding her overly large designer handbag as a weapon in the small space and nearly took my eye out with it, which didn’t seem to bother her when I pointed it out. (People sure are polite here. I was just in New York and you’d get your ass kicked if you did that to someone there.) 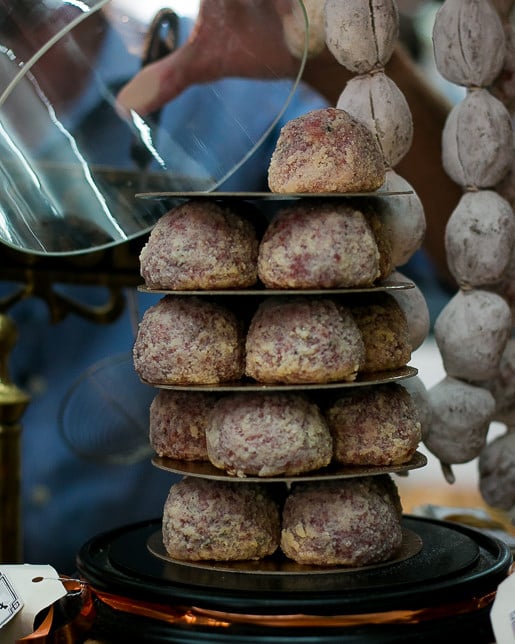 When Jennifer kindly offered another shopper a piece of the “snowball” sausage we were tasting (just above), slices of a marvelously rich ball of meat cooked with truffles then rolled in Parmesan, she was brushed away without even so much as a “Non, merci.” Hrrmph. 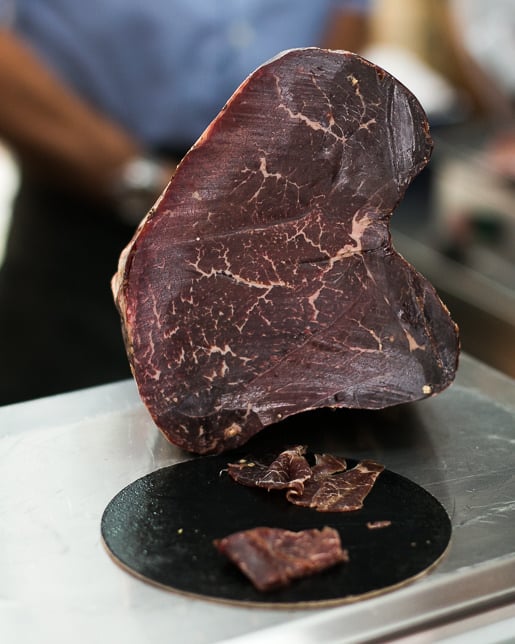 Fashion week patrons aside, I was glad that Jennifer took time from her cheese-tour guide duties (and to risk the wrath of fashionistas) in Paris and Normandy, to give me a look-see in this terrific shop. Thanks! 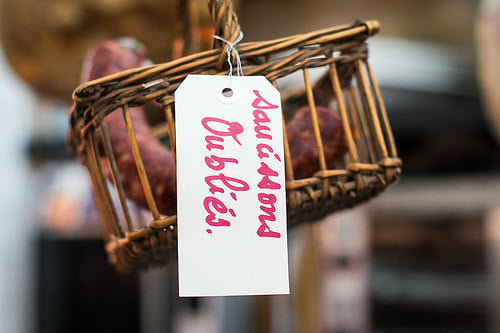 Just before leaving, I asked what the basket of saucissons oubliés (forgotten sausages) were. And true to the name, they are sausages that people bought, but forgot at the shop.

Solo has done an amazing job of curating and presenting the best hams and cured meats from across France, as well as our neighbors in Italy and Spain. Even if you’re not in the Marais, it’s worth crossing town to visit his shop where you can sample the best of France in this well-stocked cave à jambon. Just make sure that you keep an eye out for those designer handbags in the haut Marais — and don’t forget your sausages! 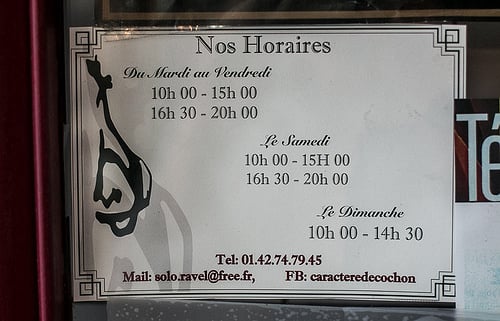