In my quest for a good burger in Paris, I was enthralled that many of you wrote with so many suggestions. I once took a course in food writing and the teacher told us not to use words like “enthralled” and “opt” because people don’t use them in everyday speech.

When I opt to look out my window, I’m enthralled at the view of Paris. So there. 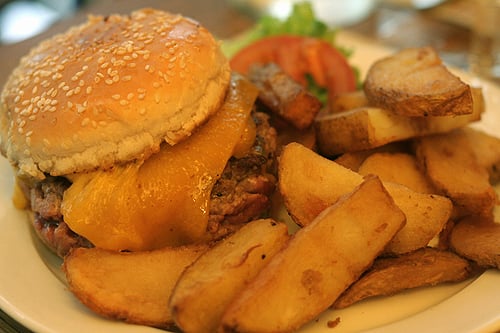 Anyhow, thanks to my vigilant readers, I’m now armed with a comprehensive list—and so are you, of places to find a decent burger here.

And to the person who wrote on an online bulletin board that they didn’t feel sorry for me, well, I ask you, where is the love, folks? This isn’t supposed to be the RNC.

Let’s just say I believe that it’s every American’s constitutional right to have access to a great burger no matter where they are in the world, and leave it at that.

So, there I was, facing the menu outside of Coffee Parisien, scanning through familiar items like Tuna Melts, Pastrami Sandwiches and at the bottom, a whole row of burgers on offer. Peering through the wood-framed windows, each table had a squat jar of Gulden’s Spicy Brown Mustard resting on it. 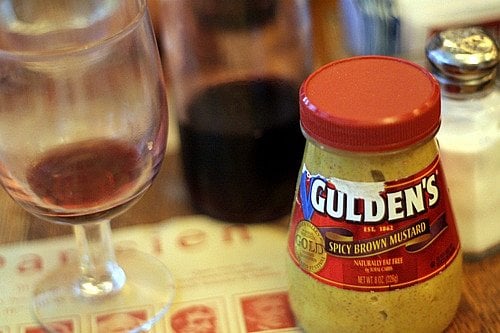 To further disprove internet conspiracy theories that I’m a douchebag, instead of barging in and pigging selfishly out by myself, I telephoned Romain and invited him to lunch. Then waited a full 35 minutes for him to arrive.
See? Aren’t I nice?

Of course, I ordered the Cheeseburger with vrai Cheddar, which was 13.50€ ($20). When asked if I wanted French fries or potato galette with it (potato galette?…with a burger?…pas du tout…) I opted for les frites. Romain ordered the Pastrami sandwich (12€, $17), hoping he’d be as enthralled with it as the ones he’d devoured in New York City. 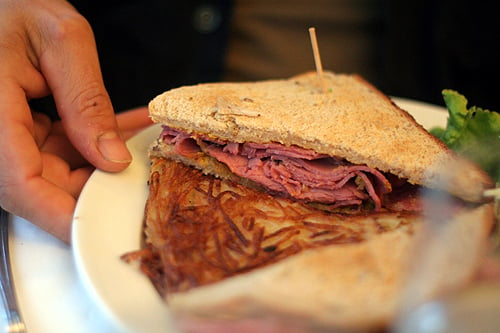 My burger wasn’t bad. Nice and juicy, plump, and there was a meager attempt to add the right condiments…although at these prices, red onions would have been more welcome than the stringy while ones. The Pastrami sandwich, was, well…it was a little stingy and flat, to say the least. It certainly wasn’t as copious st the one at Katz’s Deli. Being French, Romain wasn’t exactly enthralled and told the waitress they should put a lot more meat in their pastrami sandwiches, since that was “très correct“.

(Which is something you need to get used to living in France: people opt to be direct with others. To them, they’re doing you a favor when they tell you that the new shoes that you just dropped 265€ on are “very ugly”, or the haircut you just got is “not good at all”. See what I’m up against here, folks?) 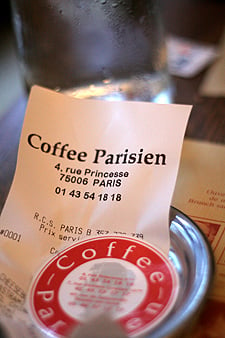 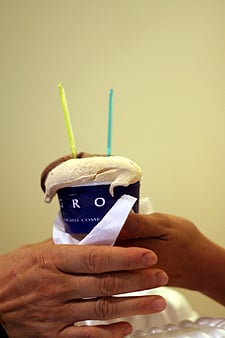 The meal was pas mal, though I’m not racing to go back. Especially since I’ve got plenty more places on my list to go to. The funny thing was, there were no Americans in here: it was all Parisians.

Which I’ll leave up to you to decide how you feel about them.

Me? I’ll opt to stay out of that discussion. But afterward we headed over to Grom gelateria, just a few blocks away, for a cup of caramel gelato with wisps of pink Himalayan salt, creamy nougat studded with crackly almond Turrone, and dark chocolate, of course.

Where to find a great burger in Paris