When I did my post about the opening of Grom gelateria here in Paris, they weren’t open when I put it up, so I was unable to provide a photo that I took. And I used one I swiped from their website, with their permission. 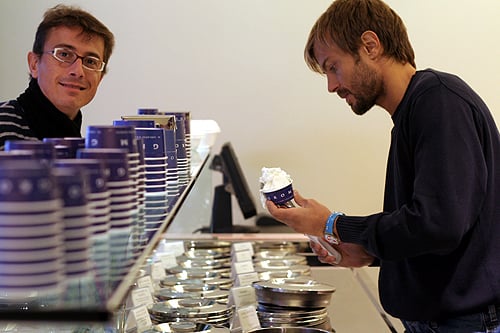 In the interest of fairness to my readers, just for you, mind you, I went back. You see, on the opening day it was pouring rain, and I left my camera at home. I felt so bad that I had to go back several times, mind you, to shoot some original photos. Which coincidentally, was when the gelato-makers and owners, Guido and Federico, were in town as well.

So I used this opportunity have a few conversations with them. As they would describe how they made a particular gelato in their line-up, I’d follow up with a question, and invariably Guido would respond, “Oh? Would you like a taste?”

Then he’d grab a paddle, lift the lid, and start smearing. Needless to say, I kept those questions coming. And soon I found myself brimming with questions. And lots of them. 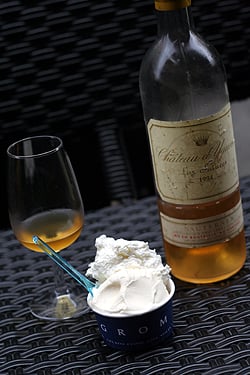 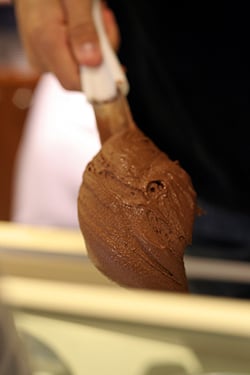 But eventually I began running running out of things to ask, so I started in with a few other, more serious, queries. Like…

“Do you always use raspberries in your raspberry sorbetto?”

“Is the Crema di grom, with crumbled polenta cookies, a good pairing with the crackly almond nougat?”

“Does it matter that you use special hazelnuts from Langhe? And, is that difference actually discernable by…uh…taste?”

And sure enough, out came the paddle, and Guido’s arm would start scooping away. 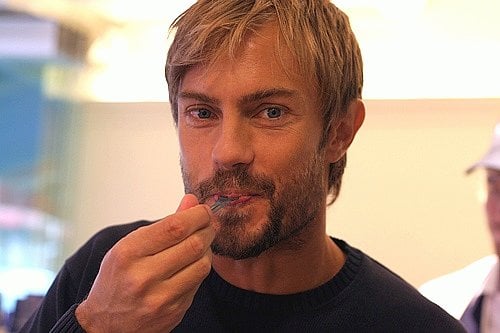 On my last trip, I make it back for a press day, when the sun was trying it’s best to shine. When Guido saw me coming, he yanked out his paddle and smeared a big blob of a very special gelato he’d made for invited members of the French press—and crashers, like me—then he poised an unreasonably large-sized blob of panna next to it, a big, huge blob of freshly-whipped Italian cream. 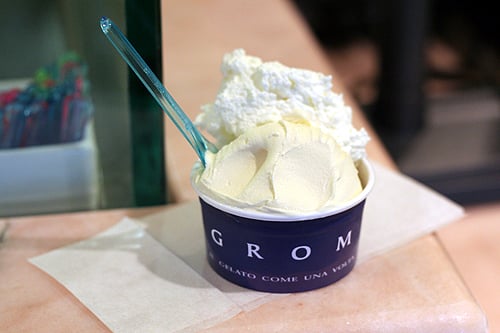 If you go, I don’t think you’ll find the Château d’Yquem gelato he was scooping on the menu. But you will find plenty of other flavors. They did share with me that the wild blueberry sorbetto is one of their most expensive, elusive, and delicious flavors to produce. And yes, I had to taste it twice since I wanted to confirm that it was, indeed, delicious.

So my sincerest apologies for posting a photo that I didn’t take previously, but I did my best to go back and compensate my transgression. I hope you can see it your hearts to forgive me. Because if not, I’ll go back.

The Glaciers of Paris