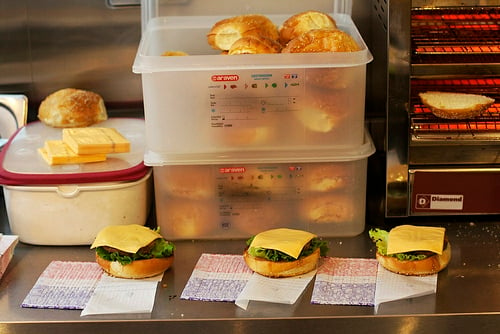 Two trends have swept across Paris over the past few years, which, paradoxically, are somewhat at odds with each other. Who would have predicted a decade ago that hamburgers and vegetarianism would both be buzzwords on the Paris food scene? One of the good things about the burger movement is that instead of the wan, overpriced (€15 and up) burgers that had been served in Paris cafés, people have seen that a good hamburger made with freshly ground beef of good quality, handmade buns, isn’t just industrial, fast-food fare.

(A third trend in Paris has been la cuisine mexicaine, or Mexican food, with a homemade tortilla shop on the way. ¡Ay, caramba!)

But when made with quality ingredients, it’s a treat worthy of the adulation it gets on its home turf. It’s like comparing the canned cassoulet made with hot dogs to the incomparable real cassoulet of the Southwest, or the rubbery supermarket camemberts to a sublime, oozingly ripe Camembert du Normandie. 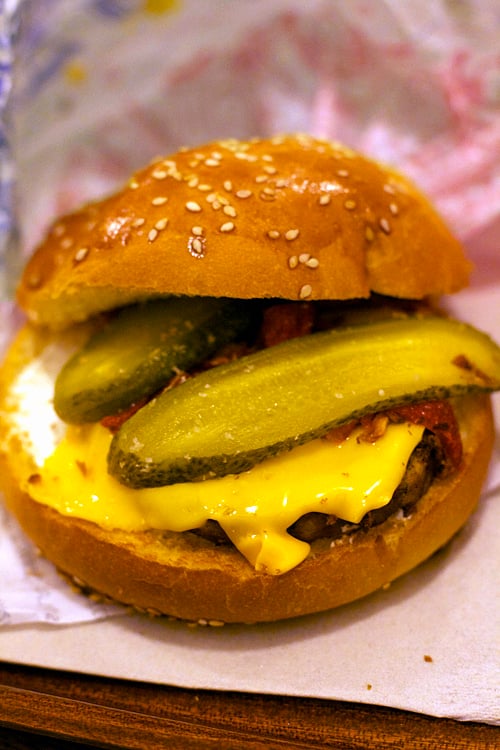 The vegetarian movement was, and has been, a bit slow to find its stride in Paris; too many take-out places pack everything in lots of plastic, and the creativity of vegetarian cooking hasn’t been fully realized. I was recently served a mound of undressed quinoa, a few leaves of arugula, and a couple of dinky vegetables on the side, which set me back €18, and at another café the €13 salade au choux was a pile of grated red cabbage tossed in vinegar. And that was it. Yes, really. I’m not kidding. It was really €13 ($17.50). And it was just cabbage and vinegar. For €13.

Even the folks who malign vegan food (including overpriced plates of cabbage) have to admit that lots of great foods fall into that category – Japanese pickled vegetable and plum maki (rice rolls), pastas with olive oil, fresh basil, garlic and stewed tomatoes, and even French classics like salade Niçoise (no, not this version) or many tians don’t even need to be adapted – they’re just naturally vegan. 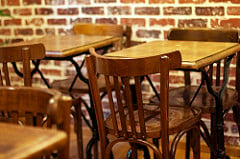 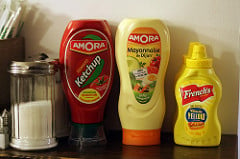 So now we have East Side Burgers, which calls itself a “The very food fast food 100% vegetarian restaurant in Paris!”, with an exclamation mark, which is indeed something that merits a bit of excitement. I knew that when they opened, they had a crush of people. So I waited a few months until things calmed down a bit.

I arrived for lunch just as they opened and the place was tidy and well-organized, always a good sign. There’s a chalkboard menu with items like quiche and hot dogs. But I was there for the burger and there were four burger choices at lunch, available as a formule (€9) with French fries or some nice-looking cole slaw, and a drink. I went with the Fromager (cheese) which looked nice when I opened the paper packet it was wrapped in, although the jury is still out on vegan cheese. The fries, however, were outstanding. Some of the best I’ve had in Paris and they were actually crisp and hot, not soggy and limp. Merci – as in, beaucoup. 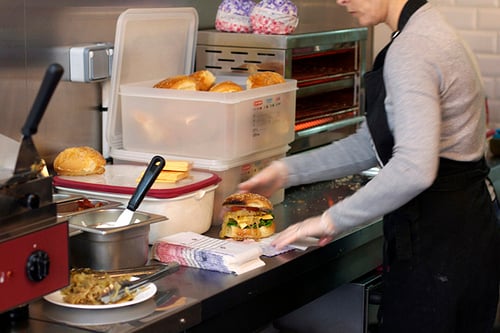 The staff is very friendly and the 22-seat downstairs dining area quickly filled up. There was a nice mix of folks in the faux-Brooklyn (another trend in Paris) dining area with briques faux (although pretty convincing, and I had to touch it to be sure) and it seemed to be mostly locals, not necessarily there because it was vegetarian fare, but because it was something new. 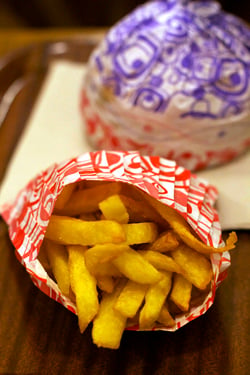 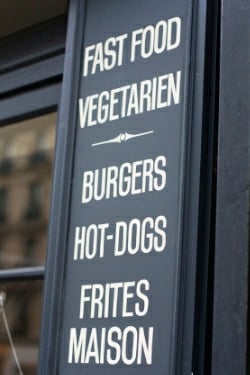 The upside of East Side Burgers is that vegetarians and vegans can eat here sans souci (without worry). The fries are excellent and the price is reasonable. One suggestion is that they ramp up the size of the soft burger patties, which are rather small for the jumbo bun. (Which they toast, which is great, although there is just a lot of bun and the burger gets lost in there.) If they dial up the size of the burger and get them as crusty as the fries, I’d say they have a hit on their hands with me. (Even though it seems from the full dining room at lunchtime, they already do. So what do I know?) 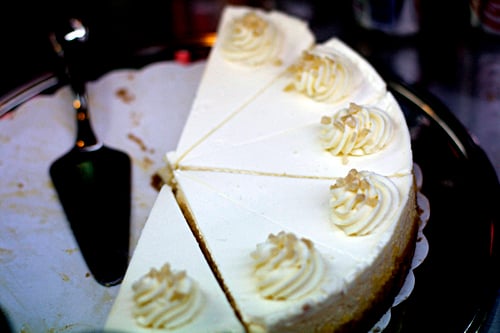 For those who tend to associate vegetarianism with “healthy”, you’ll be pleased (or not) to know that they serve Coke and Dr Pepper. There’s also Vitamin Water and a few similar drinks, but I’d rather have a glass of juice or housemade lemonade. In the afternoon, they have “Coffee Time” with a near-bottomless cup and a vegan sweet snack. I could definitely see coming back in warm weather, so I can sit outside to enjoy a café with free refills, Américain Brooklyn Paris-style. 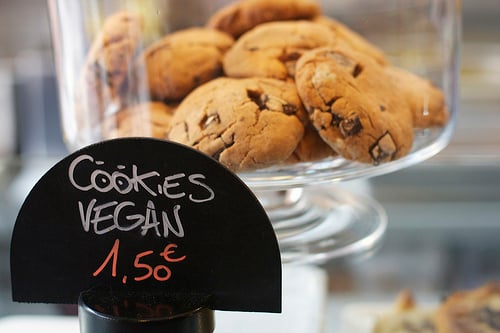 Tips for Vegtarian Dining in Paris